Centre of pressure during walking after unilateral transfemoral amputation

Lower-limb amputation imposes a burden on the daily lives of amputees, resulting in problems such as gait deterioration and subsequent limited mobility and poor quality of life [1, 2]. In particular, individuals with unilateral transfemoral amputation (UTFA) are exposed to a high risk of falls [3, 4] and asymmetric gait, which increases the risk of secondary joint disorders [5, 6]. Thus, gait assessments for individuals with UTFA are indispensable not only for providing quantitative information to help prevent injuries and prescription of treatments, but also for monitoring rehabilitation progress with prosthetic variation.

Most gait assessments require considerable time to attach markers and set up devices, as well as to analyse extensive numerical data laid out in tables. However, regular gait assessments in clinical practice and daily life require ease of measurement and interpretation. Centre of pressure (COP) trajectories during walking represent summarised gait features individually, enabling markerless, unconstrained, and time-efficient gait assessments [7]. The COP is the point location of the vertical ground reaction force vector and reflects the static or dynamic body balance [8]. Previous studies have reported that individuals with UTFA have asymmetric COP trajectories between the intact and prosthetic legs in a single stance [9, 10]. Furthermore, it has been reported that COP trajectories are related to the severity of neurological disorders [11–13]. Although an instrumented treadmill enables COP trajectory detection over multiple gait cycles in individuals with UTFA [7], the quantitative characteristics corresponding to COP trajectories remain unclear.

The objective of the present study was to investigate COP trajectories across a range of walking speeds in individuals with UTFA. According to a previous study, the intact leg contributes to lateral stability during gait, which indicates different gait principles compared to those of able-bodied controls [9, 10]. Therefore, we hypothesised that individuals with UTFA would show larger asymmetry and variability in the lateral components of COP trajectories than able-bodied controls during walking.

Twenty-five individuals with UTFA were recruited (Table 1, Table S1 in the Supplementary Information). The aetiology of amputation included trauma, sarcoma, cancer, and congenital. All individuals with UTFA used their habitual mechanical or microprocessor-controlled prosthetic knees and mechanical feet. The inclusion criteria for individuals with UTFA were (1) no neuromuscular disorder or complications, (2) no lower-limb functional limitations that significantly interfere with their activities of daily living, and (3) functional classification level of K3 or K4 and ability to walk without using external aids or supports. We also recruited 25 sex-, age-, body height-, body mass-, and preferred-walking-speed-matched able-bodied controls (Table 1). Before the experiment, all participants provided written informed consent as approved by the local ethics committee.The study was approved by the review board of our institution (Environment and Safety Headquarters, Safety Management Division, National Institute of Advanced Industrial Science and Technology)and conducted according to the Declaration of Helsinki guidelines.

All participants walked for 30 s at eight different speeds (2.0, 2.5, 3.0, 3.5, 4.0, 4.5, 5.0, and 5.5 km/h) on a split-belt force-instrumented treadmill (Figure 1; FTMH-1244WA, Tec Gihan, Kyoto, Japan). During all trials, a safety harness was used to prevent falls and relieve the fear of falling in the participants. We ensured that the harness was applied with adequate slack to prevent it from influencing natural walking. Based on a previous study [5], all participants performed an adaptation trial for at least 7 min to become accustomed to treadmill walking before data collection. In the adaptation trial, participants became familiar with all experimental speeds, and we confirmed that they could walk at each speed for 30 s with confidence. We set an adequate rest time between trials for all subjects.

Ground reaction force (GRF) data from the treadmill were converted into medio-lateral and anterior–posterior COP data sampled at 1000 Hz and filtered with a 20 Hz low-pass, fourth-order, zero-lag Butterworth filter. We determined the timing of foot contact and toe-off for both limbs by using a vertical GRF threshold of 40 N [5], based on which strides were calculated. Then, we used 15 strides after 2 s of achieving each walking speed to analyse the COP data.

As our data were not normally distributed (Shapiro–Wilk test, p < 0.05), we used non-parametric tests for all statistical analyses. Mann–Whitney U tests were conducted for paired comparisons between individuals with UTFA and able-bodied controls. We also performed the Friedman test to investigate the main effect of walking speed in each group. When a significant main effect was observed, the Wilcoxon signed-rank test was conducted as a post-hoc comparison. Statistical significance was set at p < 0.05 and adjusted with the Bonferroni correction. All statistical comparisons were performed using RStudio version 1.4.1717 (RStudio, Inc.). The users of microprocessor and non-microprocessor knees in the above analyses were compared, and the results are presented in the Supplementary Information (Figure S1, Table S2).

Figure 2-B demonstrates that the LV of the individuals with UTFA is significantly larger than that of the able-bodied controls across all speeds (p < 0.05). In contrast, no significant difference in APV is observed between the two groups at any speed (Fig. 2-C). The LV at 2.0 km/h is greater than that at higher walking speeds (Fig. 2-B). A significant main effect of walking speed on APV is also observed in the able-bodied controls (p < 0.05) but not in the individuals with UTFA (Fig. 2-C).

The objective of the present study was to investigate COP trajectories across a range of walking speeds in individuals with UTFA. As shown in Figs. 2-A and B, the LS and LV in the COP butterfly diagram for the individuals with UTFA are significantly greater than those of the able-bodied controls. However, there is no significant difference in APV between the two groups over a wide range of walking speeds (Fig. 2-C). These results support our hypothesis that individuals with UTFA show larger asymmetry and variability in the lateral components of COP trajectories than able-bodied controls during walking.

One possible explanation for the large LS and LV in subjects with UTFA may be a compensatory strategy for lateral instability during walking. According to a previous study, the prosthetic leg cannot control the lateral moment of the ankle, which causes instability of the stance phase [9]. Consequently, the intact legs of individuals with UTFA must compensate for the lateral instability derived from their prosthetic legs, leading to lateral asymmetry of the COP trajectories [9, 10]. In addition, Lin et al. [14] reported that step width variability, which is related to the LV, was positively correlated with the functional capacity of physical activity in lower-limb amputees. Thus, the greater LV in our study may reflect the ability of individuals with UTFA with higher physical activity levels (K3 and K4). As there were no significant differences in APV between the individuals with UTFA and the able-bodied controls (Fig. 2-C), the current results suggest that individuals with UTFA adopt orientation-specific balance control strategies during gait.

The authors are grateful to all individuals who participated in the study. The authors also thank Mr. Ryo Amma, a technical staff member at the National Institute of Advanced Industrial Science and Technology, for his great support and preparation for data collection. This work was supported by JSPS KAKENHI (19K11338).

All authors contributed to conception and design of the research, interpretation of data and manuscript preparation. D.I. analysed the data.

None of the authors have any conflicts of interest associated with this study.

Table 1. Characteristics of able-bodied controls and individuals with UTFA (mean ± standard deviation). The preferred walking speed was determined by gradually increasing the speed of the treadmill (from 2.0 km/h) until the subjects indicated that the walking velocity felt comfortable. 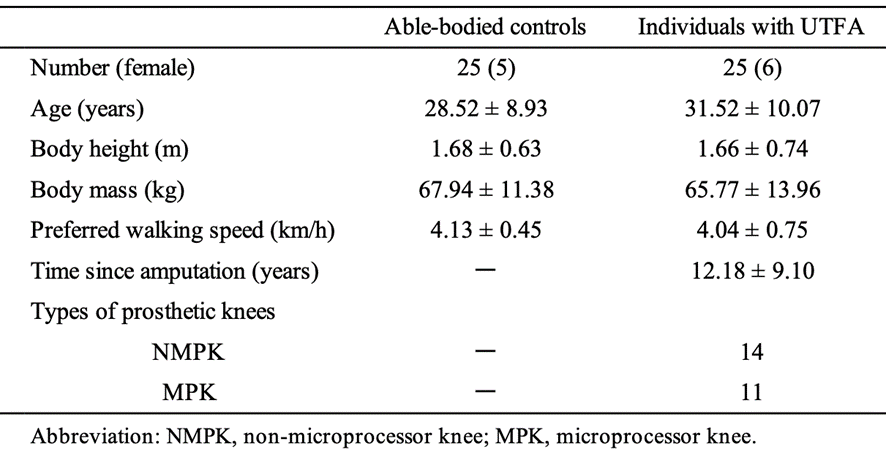