Electron-beam melting (EBM) is a rapidly developing metal additive manufacturing (AM) method. It is more effective with complex and customized parts manufactured in low volumes. In contrast to traditional manufacturing it offers reduced lead time and efficient material management. However, this technology has difficulties with regard to the construction of overhang structures. Production of overhangs using EBM without support structures results in distorted objects, and the addition of a support structure increases the material consumption and necessitates post-processing. The objective of this study was to design support structures for metal AM that are easy to remove and consume lower support material without affecting the quality of the part. The design of experiment methodology was incorporated to evaluate the support parameters. The multi-objective optimization minimizing support volume, support removal time along with constrained deformation was performed using multi objective genetic algorithm (MOGA-II). The optimal solution was characterized by a large tooth height (4 mm), large tooth base interval (4 mm), large fragmented separation width (2.5 mm), high beam current (6 mm), and low beam scan speed (1200 mm/s).

EBM is a metal-based AM technology, which works under the powder bed fusion process. It is gaining importance in the field of rapid manufacturing (RM) which is a term used for fast and flexible manufacturing of parts using three-dimensional (3D) computer aided design (CAD) data. The EBM technology was innovated and developed in 1997 by Arcam AB company (Sweden). EBM can produce highly dense parts with mechanical properties similar to or even better than those of parts manufactured via traditional methods. Since it is a  powder-bed-fusion process, the parts are built inside the powder envelop. Thus, ideally, the unmelted powder around the part should support the overhanging surfaces, eliminating the need for external support structures. However, the unmelted powder is found to be ineffective to support the molten metal. It is because the unmelted metal powder is not thermally conductive, which leads to dross formation, distortions, and warping [1], [2]. Therefore, the support structures are essential for the successful fabrication of overhanging surfaces [3], [4]. The principal objectives of support structures in AM are 1) the prevention of part curling, distortion, sagging, cracks, shrinkage, and/or other deformations resulting from thermal stresses and 2) anchoring of the part on the building platform [2]. Moreover, they ease the removal of the fabricated part from the built platform and strengthen thin-and-tall parts during the building process. Although support structures are necessary, they pose the following challenges [2], [5]:

Fragmented support structures were used in order to reduce the material consumption and enhance the support removal after the built process. They contain two parts: the main support body and a part/support contact area (support teeth). Application of the fragmentation design strategy results in the subdivision of support structures (called fragmented support), where the support walls are divided by slots, as shown in Figure 2a. Fragmented supports have design parameters, such as the separation width, fragmentation interval, and tooth parameters. Figure 2b shows the specimen supports generated in Magics® software (Materialize, Belgium).

Response surface methodology (RSM)-based central composite design was used to perform the experiments systematically. This method is the especially useful in the optimization of responses. According to the parameters and their respective levels, a total of 90 runs were performed (alpha value = 1; 2 replications of factorial points; 16 replications of the center point). Design-Expert version 12 (Statease, Minneapolis) was used to evaluate the effects of different factors on support performance.

An ARCAM A2 machine based on EBM process from ARCAM AB, (Sweden)  was used for fabricating the test specimens. The setup and schematic diagram of the EBM process is shown in Figure 3a and 3b respectively. In the EBM process, a high energy electron beam selectively melts the metal alloy powder into a fully solid part in a layer-by-layer manner based on the CAD data [15]. In Arcam machine, the part built parameters vary with that of support structures parameters. In the current study the specimens were built with 50 µm layer thickness using default optimum built parameters supplied by the manufacturer as follows; 200 µm beam spot diameter, 15 mA current, 4530 mm/s scan speed, 3 mA focus offset and 0.1mm line offset. Support design and process parameters were varied based on the Table 1. 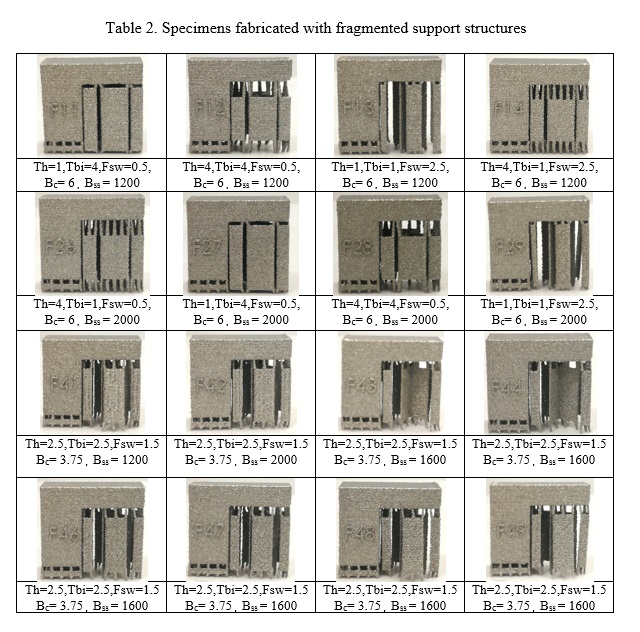 Three responses were used to assess the performance of the designed support structures: the support-structure volume, support removal time, and warping deformation. The support-structure volume was measured using an online tool viewstl.com. The support structures were imported into this online application using the browser and their volume was calculated. The support structure removability was evaluated according to the support removal time. The supports were removed manually using wire cutters, and time taken was recorded. To maintain uniformity, the support removal pattern was kept the same for all the specimens The overhang structure deformation was evaluated by measuring the warping deformation. The shadowgraph method, using a profile projector with an accuracy of 2 µm was employed for the measurement of warping deformation as shown in the Figure 4. Shadowgraphy is a quick and useful method  for measuring geometric accuracy. In this technique, a two-dimensional representation of a 3D part is created and parts are measured using the optical measurement system.

After the evaluation of performance measures for all the combinations, Analysis of Variance (ANOVA) test was conducted in order to determine the significant parameters, relative effects and  study the contribution ratio of the parameters.

Multi objective optimization was performed in order to find the optimal parameters minimizing supports volume, and supports removal time while constraining the warping deformation (WD).  The warping deformation was constrained to a very low value using the constrain (WD < 0.1mm). And to ensure the feasibility of the optimal solution by avoiding negative values, another constraint (WD ≥ 0) was added. Multi-objective optimization was then formulated using multi objective genetic algorithm (MOGA-II) and RSM in modefrontier® software (esteco). The workflow for the fragmented support optimization in Mode Frontier software is shown in Figure 5.

Results of the ANOVA test at a 95% confidence interval are presented in Table 3. The results showed that the selected fragmented support parameters along with their interactions have significant effect on the support volume. According to the sum of squares the fragmented separation width (Fsw.) has the most significant effect on the support volume.

The  mathematical model of the FSV was developed using the response surface methodology (RSM), given by equation 1.1.

The developed predictive model has high R-Square of 99.95% which indicate that the parameters included explain 99.95% of variation in support volume. Therefore, it can be deduced that the developed model is adequate and the predictive model can be utilized for predicting the fragmented support volume. The developed predictive models were confirmed for their adequacy using a two-sample t-test at a 95% confidence interval. It has been found that P-value for the fitted model is greater than α (0.05). This suggests that null hypotheses H0: μ1= μ2 cannot be rejected i.e., means for actual measured responses and fitted responses are almost equal. A comparison of the actual measured results with predicted ones is shown in Figure 10.

Numerical optimization was then carried out in order to find the optimal parameters minimizing the FSV using desirability approach. The optimization results show several optimal solutions with various desirability values. Table 4 presents five solutions (out of 94), along with their respective desirability values. Figure 11 shows the selected solution by the software. Based on the practical feasibility, the selected solution is acceptable.

The variation of desirability function with tooth height, tooth base interval, and fragmented separation width is shown in Figure 12. It can be seen that the desirability is higher at higher level of selected parameters.

The interactions of the fragmented support parameters on the FSRT is shown in Figure 14. It was found that at lower levels of  tooth base interval and scan speed, FSRT increases significantly with increase in beam current. This is because at lower levels of scan speed the input energy is higher for every level of beam current resulting in stronger support structures that are difficult to remove. The FSRT was found to be minimum with low beam current and that at low beam currents variation of tooth base interval and scan speed did not had any significant effect on FSRT.

The predictive model of FSRT is is given by the equation 1.2.

The developed model has R –Square value of 91.40%. The high R-square value confirms the model adequacy and that all factors affecting FSRT have been considered in the predictive model. T-test of 95% confidence interval was conducted between actual and predicted data and it was found that P-value for the fitted model is is greater than α value (α= 0.05). This suggests that null hypotheses H0: μ1= μ2 cannot be rejected i.e., means for actual measured responses and fitted responses are almost equal. A comparison of the measured results with predicted ones is shown in Figure15.

To find the optimal solution minimizing the FSRT, numerical optimization was then performed using desirability approach. Five of the optimal solutions (out of 100 solutions) are listed in Table 6. Figure 16 shows the selected solution based on the software suggestions, it was found to conflict with warping deformation response. The variation of desirability function with the support parameters is shown in Figure 17. The desirability was found to be high for low beam current and higher levels of tooth base interval and beam speed.

The effects of the design and process parameters of fragmented support on the overhang warping deformation was evaluated and analyzed using the ANOVA test. Table 7 presents the ANOVA test results of the WDFS. The results show that the selected parameters along with few interaction terms have significant effect on the WDFS.

The predictive model of the warping deformation achieved by the backward elimination method is is given by the equation 1.3.

The developed model has R –Square value of 92.32%, which confirms the model adequacy. T-test of 95% confidence interval was performed between the actual and predicted data. It was found that the P-value for the fitted model is greater than α value (α= 0.05) which suggests that null hypotheses H0: μ1= μ2 cannot be rejected i.e., means for actual measured responses and fitted responses are almost equal.  A comparison of the actual measured results with predicted ones is shown in Figure 20.

Optimization was then carried out using desirability approach in order to find the optimal parameters minimizing the WDFS. Five of the optimal solutions (out of 100 solutions) are listed in Table 8. Based on the practical feasibility the suggested solution is applicable with acceptable values for the other responses. Figure 21 shows the selected solution based on software suggestions. The variation of desirability function with the support parameters is shown in Figure 22.

Table 9 presents the optimum solutions; The first solution is the real and corresponds to the original DOE matrix. The optimal solution consists of high levels of parameters except for the scan speed.

The objective of this study was to design support structures for metal AM that allow the production of parts that are easy to remove, consume less material without having much impact on the quality of the part. The analysis of results showed that the design and process parameters of the support structures significantly affect their performance. Support structures with the tooth height of 4 mm, tooth base interval of 4 mm, fragmented separation width of 2.5 mm and specific process parameters (beam current of 6 mA and beam scan speed of 1200 mm/s) yielded favorable results for material consumption, support removability, and part quality.

Based on the analysis of the results, the following conclusions can be drawn:

The EBM process is relatively new and is still in the development stage; therefore, it provides many research opportunities in different aspects. Regarding the design of support structures for EBM, optimization of tree support structures is suggested for future research.

Funding : The authors are grateful to the Raytheon Chair for Systems Engineering for funding.

The authors declare no conflicts of interest.

Availability of data and material: All data generated or analysed during this study are included in this published article (and its supplementary information files).