The global rate of H. Pylori infection eradication is decreasing due to increased antibiotic resistance, particularly clarithromycin and levofloxacin. 11. In the eastern Mediterranean area, the resistance to clarithromycin, metronidazole, levofloxacin, amoxicillin, and tetracycline were 29%,61%,23%,14%,10% respectively.12 Several researchers reviewed many therapy regimens including sequential, concomitant, and hybrid to find the best treatment protocol. 13 The results of conventional triple therapy in Syria were disappointing. 14 Tetracycline is unavailable in Syria, therefore we used doxycycline in the bismuth quadruple regimen.15,16 Although tinidazole isn’t superior to metronidazole in treating Helicobacter Pylori infections, we used tinidazole instead of metronidazole in both regimens, because H. pylori have a high metronidazole resistance rate. 17 and metronidazole is a commonly used drug in Syria for treating gynaecological and gastrointestinal diseases. We didn’t perform a susceptibility test of H. Pylori to antibiotics, since it is not accessible in Syria or neighbouring countries. There is a lack of data about the efficacy of the modified bismuth quadruple regimen and modified levofloxacin-containing quadruple concomitant regimens in Syrian patients, so we conducted this trial to evaluate the efficacy and report the eradication rate according to intention to treat analysis (ITT) and per-protocol analysis (PPA).

This was a prospective single-center an open‑label parallel blind randomized controlled trial.. This study was performed in the department of gastroenterology at Damascus hospital, Syria. We recruited appropriate candidates from patients who visited our clinic for evaluation of dyspeptic symptoms by upper gastrointestinal endoscopy between February 2020 and August 2020. Exclusion criteria were (1) younger than 18 years and older than 80 years; (2) prior eradication treatment for H pylori; (3) documented reactions to any of the studied medications ;(4) recent use of antibiotics, bismuth, or proton pump inhibitors (PPIs) in the preceding month; (5) pregnant or lactating women; (6) previous gastric surgery; (7) alcohol or opioid abuse; or (8) severe concurrent medical illnesses, such as liver failure, renal failure, or terminal malignancy. The Ethical Committee of Damascus hospital had approved the design and procedures of this research. We provide each patient with written informed consent before beginning the study procedure. We register this study as a standard randomized clinical trial (Clinicaltrial.gov, identifierNCT04348786, date:29-January-2020, https://clinicaltrials.gov/ct2/show/NCT04348786).

We used a Microsoft Excel function called (RANDBETWEEN) to generate a sequence of two randomized numbers, number one referred to the B-group, and number two referred to the L-group. We printed each code on separate paper and inserted it into sealed opaque envelopes in unchanged order, and held it in a secure locker belonging to an independent medical staff member. After obtaining informed consent, the independent medical staff member took the top envelope to assign each patient to the treatment regimen. We provided written instructions to all patients on how to take the medications. At the end of the treatment course, patients revisited the clinic to investigate side effects and evaluate compliance.

Eligible patients have undergone upper gastrointestinal endoscopy. Endoscopists have taken five gastric biopsies: two from the antrum, two from the body, and one from the incisura according to the Sydney system.18 Pathologists confirmed H. Pylori infection by microscopic examination after using haematoxylin, eosin, and Giemsa stains.19 We sent all biopsies to the central pathology laboratory of the same referral hospital.

At week eight, patients visited the central laboratory of our hospital and performed stool antigen tests by using the enzyme immunoassay method (EIA).20

Adverse drug reactions and drug regimen compliance were assessed by a qualified physician. Adverse drug reactions were evaluated using open-ended questions in patient self-reports. We reported side effects such as nausea, vomiting, diarrhoea, melena, dysgeusia, and anorexia. We evaluated compliance by counting the number of pills unused of each medication and considered that the patient was complaint if he/she has taken at least 90% of the assigned treatment protocol. Medical laboratory workers were blinded to the treatment arm. Numerical data were shown as mean, while qualitative data were expressed as a ratio.

Authors reported the results according to CONSORT.)

The primary outcome was the H pylori eradication rates of the initially assigned treatment according to intention to treat analysis (ITT), and per-protocol analysis (PPA).

Our sample size (N = 78) was planned before the study, based on Federico et al research. the eradication rate based on ITT was 0.92 % in modified concomitant levofloxacin-containing therapy.21 We used tinidazole instead of metronidazole in the doxycycline-bismuth regimen for the first time, so we assumed that the eradication rate was 0.5, which gave us the largest sample size. 22,23 We used a power (1-β) of 99%, two tails test and Significance level(α) equal to 5%, with a 1:1 allocation ratio. Each treatment arm requires thirty-four patients.24,25 We added five patients to each group to compensate for the predicted dropout. 26,27.

We collected 226 patients diagnosed with H. pylori infection confirmed by biopsy. Seventy-eight treatment-naive patients enrolled in this study (39 patients for each group), only one B-group patient didn’t complete the follow-up. [Figure 1 and Table 1] summarizes the flow chart and baseline characteristics. The gender, mean age and pharmacological side effects were similar among treatment groups, except for melena, which occurred more frequently in the B-group.

H. Pylori infection was eradicated in thirty patients from the B-group, and thirty-two patients from the L-group. The eradication rates according to ITT and PPA analysis are summarised in a table (2). We didn’t report serious adverse effects.

Researchers globally observed a decline in the rate of H pylori eradication following standard triple therapies, thus requiring a search for new therapeutic approaches. [45–48] This randomized clinical trial included 78 patients from an area of high prevalence (˃15%) of clarithromycin and levofloxacin resistant H pylori strains. 1,12,14,28,29 Both levofloxacin concomitant and bismuth-containing quadruple therapies are recommended as alternative first-line treatment according to the previously mentioned guidelines, particularly in regions with a high prevalence of clarithromycin resistance.13,15

Our results showed that both regimens had a fair eradicating rate of H pylori. The eradication rate for modified levofloxacin concomitant protocol was 82.05% according to ITT analysis; while bismuth quadruple protocol had a PPA eradication rate of 78.94%, and 76.92% according to ITT analysis. The overall eradication rate of the levofloxacin regimen was about 3% higher than the bismuth quadruple regimen but the difference didn't reach statistical significance. The result of levofloxacin containing therapy can be regarded as Grade D standard, while the result of bismuth-containing therapy can be regarded as Grade F as proposed recently.30 Our results are consistent with a meta-analysis by Essa et al. and similar research by Federico et al. in concomitant therapy, both studies showed that concomitant therapy is effective in the eradication of H.Pylori,21,31 while a meta-analysis by Niv et al. found that doxycycline had good efficacy in treatment H.Pylori infection.16 Even though this research treated patients for a longer period, 32 our results didn’t show the effectiveness mentioned in previous studies. We could explain these results by (1) H. Pylori resistance in CagA-homB + strains,33 because health care providers overprescribe antibiotics—especially macrolides and fluoroquinolones—for treating respiratory, urinary and gynaecological infections, 34–36 (2) outpatients incompliance to antibiotic regimen 37,37−39 and (3) using locally produced drugs. 40,41

Our study has a few limitations: (1) The only method to investigate past medication was to interrogate patients, because of the absence of electronic medical records for patients, therefore, authors considered the patient “naïve” if he/she wasn’t treated previously for H. Pylori infection; (2) we depended on patients to evaluate the compliance; and (3) we didn’t perform a susceptibility test of H. Pylori to antibiotics, because it not available in Syria.

Our results showed that both regimens had an acceptable rate of eradication, and the difference didn’t reach statistical significance. These results were highly promising in treating H. Pylori infection in Syria.

The success rate of the standard triple therapy with clarithromycin or levofloxacin has declined substantially due to increasing antimicrobial resistance. ACG clinical guideline and Maastricht consensus recommended alternative regimens, including bismuth-containing quadruple therapy or non-bismuth concomitant therapy, as first-line therapies, particularly in areas with a high prevalence of clarithromycin resistance like Syria. Both studied regimens had equally reasonable efficacy with no serious adverse events. Further studies will help select the best first-line empirical therapy in the Syrian population for Helicobacter-Pylori Infection.

Ethical Committee of the general assembly of Damascus hospital (Approval No:5‑30‑12‑19).

A proper consent form was approved by the patients. It was clearly stated that only clinical information will be shared in research, without mentioning any personal details at any part of the article.

We transfer, assign, or otherwise convey all copyright ownership, including any rights incidental thereto, exclusively to the journal, if such work is published by the journal.

The authors declare that there is no conflict of interest.

None. No funding to declare.

all authors have read and approved the manuscript 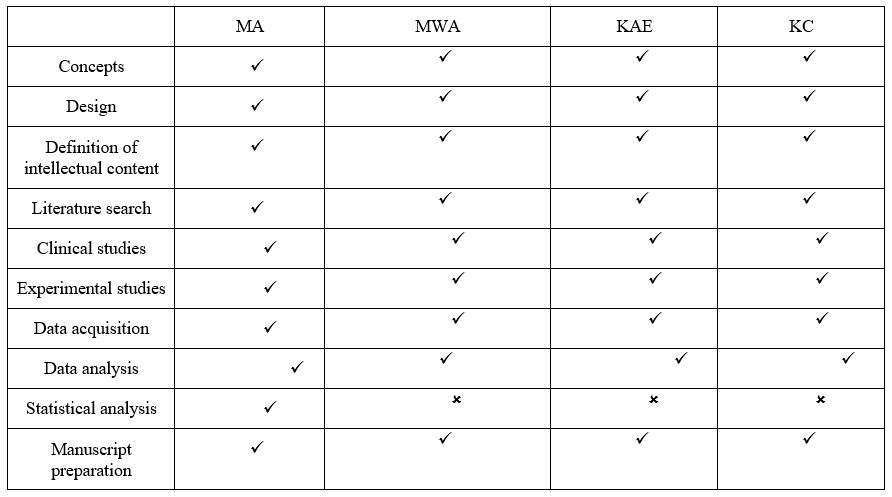