Nowadays, with the rapid growing of economic and industrialization, heavy metal ions has been the most serious problem in water environment due to their toxicity and incompatibility(Fu and Wang 2011). Heavy metal ions,such as copper (Cu)(II) ,hydrargyrum(Hg)(II), chromium (Cr)(VI), plumbum (Pb)(II) and so on༌have posed a great threat to human survival due to its undegradability and toxicity in water(Uddin 2017).

There are many traditional methods to solve the problems caused by heavy metal ions, such as adsorption, coagulation, membrane separation, oxidation and ion exchange(Wan Ngah and Hanafiah 2008). Among them, adsorption is considered to be one of the most popular strategies for heavy metal ion removal because of the high removal efficiencies, flexibility in the design and application of adsorbents, and low cost(Qin et al. 2019).The adsorbents mainly include activated carbon, clay, biochar and polymers. Recently, nanocellulose based adsorbents become more and more popular as nanocellulose has higher specific surface area, excellent mechanical properties and good biocompatibility(Du et al. 2016; Jordan et al. 2019).

It is reported that the heavy metal Cu2+usually accumulates in human liver and cause serious anemia and hemolysis(Stern 2010).Tang et al.(2020a) used 3-glycidyloxypropyl) trimethoxy silane (GPTMS) as a cross-linking agent to cross-link PEI onto the cellulose nanofibril skeleton and quickly freeze-dried with liquid nitrogen to obtain aerogel beads. Its maximum adsorption capacity for Cu2+reached 163.4mg/g. Zhang et al.(2016) used glutaraldehyde as a cross-linking agent to cross-link PEI onto TOCN and then freeze-dried to obtain TOCN-PEI adsorbent with a maximum adsorption capacity of 52.32 mg/g for Cu2+.Mo et al.(2019) used Trimethylolpropane-tris-(2-methyl-1-aziridine) propionate (TMPTAP)as a cross-linking agent and cross-linked PEI and TO-CNF to obtain TO-CNF/TMPTAP/PEI aerogel. Its maximum adsorption capacity of Cu2+could reach 485.44mg/g.

The TEMPO oxidized cellulose nanofibers(TOCNF) were prepared according to previously reported methods(Qin et al. 2011). Weigh 4gBSP accurately, disperse in 400ml deionized water, add 0.016g TEMPO, 0.16g NaBr, 80ml 10% NaClO solution. After that, 0.1MHCl was used to adjust the optimal pH to 10-10.4. In the reaction process, the pH of the solution will gradually decrease with the formation of carboxyl group. 0.5MNaOH solution is used to adjust the pH to 10 until the pH no longer drops, and 5mL ethanol is used to terminate the reaction.

The PVA solution (12.5mL, 8wt%), CNF solution (100g, 1wt%) were mixed together in a flask under vigorous stirring for 4h. The weight ratio between the PVA and CNF were 1:1(Zheng et al. 2014).At the final stage, CNF/PVA solution was placed for 24h to remove bubbles. The freeze-drying process was maintained at -30°C to obtain CNF/PVA aerogel.

Add 2g CNF/PVA aerogel into 100ml 10% PEI/methanol (w/v) solution and stir at 30°C for 24h. Then wash with methanol to remove unreacted PEI. Then disperse the precipitate in 100mL deionized water, then slowly add 4mL of 25% glutaraldehyde aqueous solution, then adjust the pH to 8 with 0.4M NaOH. Stir for one hour to make the two react, and finally, wash the product with deionized water and freeze Dry to obtain CNF/PVA/PEI adsorbent.

Scanning electron microscope (Regulus 8220, Japan) was used to characterize the morphology of materials. All the specimens were coated with Au before observation.

Thermogravimetric analysis (TGA) was conducted with a synchronous thermal analyzer (STA449, USA) test. Samples were heated at a constant heating rate of 10°C/min, from room temperature (RT) to 650°C, under inert (N2) atmosphere.

The specific surface aeras were measured by the Brunauer–Emmett–Teller (BET) method based on N2 adsorption. The determinations were carried out from freeze-dried samples with an analyzer (Micromeritics, USA). Prior to testing, the samples should be degassed at 120°C for 4h.

The initial concentrations of Cu2+ was set to be 1000mg/L. The whole contact time was 2 h under Temersionoxcillator registration (Noki)at room temperature for all batch experimental process. Residual concentration of Cu2+ were measured by flame atomization atomic absorption spectrometry (AAS, GGX-600, China). The amount of Cu2+ adsorbed onto the adsorbent was calculated from the difference between the initial (C0) and the remaining (Ce) metal concentration in solution(Anirudhan et al. 2019). 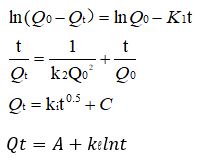 The effect of pH on adsorption capacity

The initial pH value of the copper solution has a crucial influence on the absorption performance of the absorbent, because it determines the form of the copper ion species and the electrostatic repulsion between the absorbent and Cu2+ ions. Due to the presence of amino groups in CNF/PVA/PEI, the surface charge will change with the change of pH, thereby affecting the adsorption capacity. In addition, when the pH exceeds 6.5, Cu2+ ions may be converted to Cu(OH)2 precipitation(Shao et al. 2017), it may cause deviations in the adsorption process. Therefore, the pH of the solution is set to 2, 3, 4, 5, 6. The sample is 0.05g. Take 50ml of 20mg/L Cu2+ ion standard solution and adjust the pH to 2, 3, 4, 5, and 6, respectively. A sodium hydroxide aqueous solution (NaOH, 0.1mol/L) was used for pH adjustments.

The standard solution of Cu2+ is dispersed in deionized water for later experiments (20, 40, 60, 80 mg/L for adsorption experiments and thermodynamic curve study). 0.1g CNF/PVA/PEI nanoparticle were added to 50ml Cu2+ solution. Shake in a constant temperature shaking box for 24 hours at a temperature of 25°C, then take the supernatant and determine the adsorption capacity with an atomic absorption analyzer to determine the adsorption capacity.

The 100mg CNF/PVA/PEI nanoparticle adsorbed with Cu2+ were dispersed in 1M HCl solution and stirred at room temperature for 1 hour to remove Cu2+ions. The nanoparticle was then submerged into deionized water to remove the excess acid until the pH reached 7, and the nanoparticle were dried for the next adsorption process.

It is clear that softwood bleached pulp cellulose has absorption peaks at 3400cm-1, 1430cm-1, 1370cm-1, 1322cm-1 and 897cm-1(Fig.1), which are O-H group stretching vibration, C-H scissoring vibration, C-H bending vibration, O-H in -plane vibration and C-H deformation vibration of cellulose, respectively(Zhu et al. 2021). (Sirvio et al. 2015; Tarchoun et al. 2019).It can be observed that TO-CNF appears an intense peak in 1606cm-1, which was assigned to the characteristic peak of the carbonyl of the carboxylic acid group.

Compared with CNF, a absorption peak belonging to PVA appeared at 850cm-1 of CNF/PVA aerogel, it may be caused by the formation of intermolecular hydrogen bonds(Takeno et al. 2020). And for CNF/PVA/PEI nanoparticle, the peak in the 1600-1800cm-1 region appeared to be the overlap the three individual peaks, which belonged to N-H bending vibration (1615cm-1), C=O stretching vibration for-COO-(1660cm-1) and for -COOH (1713cm-1), respectively. At the peak of 1660cm-1, there is also a C=N group stretching, which appears in the process of glutaraldehyde crosslinking. In addition, at 2923cm-1 and 2848cm-1 as early as- CH2—stretching vibrations can also prove that PEI likely assembled into the CNF/PVA aerogel by N-H bond(Tang et al. 2020b).

The thermal degradation profiles of BSP, CNF, CNF/PVA aerogel, CNF/PVA/PEI nanoparticle, were assessed by thermogravimetric analysis (TGA) under nitrogen atmosphere from RT (room temperature) to 650°C (Fig.3. a). During the process from RT to 100°C, due to the loss of water, the three substances have a slight quality degradation (not more than 2%)(Eun et al. 2020; Rani et al. 2014). BSP loses the fastest weight in 280°C-399°C, which is the main stage of cellulose pyrolysis. Within this range, BSP is pyrolyzed into small molecular gases and condensable volatiles of macromolecules, resulting in significant weight loss, and its weight loss rate reaches its maximum at about 384.9°C. The maximum degradation temperature of CNF is 320°C (about 50% loss), which is used for the pyrolysis of the cellulose skeleton(Yao et al. 2017). At the end of the analysis, the mass percentage of CNFs pyrolysis residue was 26%. The CNF/PVA aerogel begins to show its first decline at 221.8°C, and the maximum degradation temperature (loss of ca. 40%) appears at about 324.7°C. CNF/PVA/PEI nanoparticle have their first degradation at 216.4°C, and the maximum degradation temperature is 327.5°C (loss of ca. 52%). At the end of the analysis, the remaining CNF/PVA aerogel and CNF/PVA/PEI nanoparticle were 31% and 16%, respectively. The thermal stability of the adsorbents up to 205°C can be a valuable asset in the industrial sector context where the effluents can be warm or hot(Silva et al. 2020).

Effect of pH on Cu2+adsorption

As shown in the Fig.4. (b), at the beginning, the adsorption capacity increased rapidly and then the increasing trend became slow and finally stabilized, which may be due to the reduction of effective adsorption sites. Therefore, 120min is selected as the best adsorption time for Cu2+.

Adsorption kinetics of Cu2+ by the CNF/PVA/PEI nanoparticle.

Four curve models, Pseudo-first-order kinetics, Pseudo-second-order kinetics, Intra-particle diffusion model and Elovich equation, are used to explain the adsorption mechanism of Cu2+ in aqueous solution. The Table 4andFig.5. (a-d) show the fitted curve and result, respectively. At four different concentrations, the correlation coefficient (R2s) of the Pseudo-second-order model is all above 0.99. However, for the Pseudo-first-order model, the R2s is between 0.9006-0.9677. The fitting results of the Intra-particle diffusion model are not very good, and the R2s of the four concentrations are all less than 0.87. For the fitting results of Elovich equation, the R2s of the four concentrations are between 0.8065-0.9594. Therefore, the Pseudo-second-order model is considered to be the most suitable data for experimental results. In the adsorption process, both physical adsorption and chemical adsorption exist. The chemical adsorption of Cu2+ is a rate-limiting process. Functional groups such as hydroxyl and amino groups in CNF/PVA/PEI nanoparticle provide adsorption sites for chemical adsorption. Large specific surface area will provide more opportunities for the adsorption of heavy metal ions.

Authors’ contribution All authors contributed as the main contributors of this work. All authors performed the literature search and analysis. All authors had drafted, revised the work and approved the final paper.

Funding This article was financially supported by the National Key R&D Program of China(2017YFB0307900).

Availability of data and material Not applicable.

Ethical approval This article does not contain any studies with human participants or animals performed by any of the authors.

aT0, T5%, Tmax were calculated from TGA curves.

Table 4 The fitting parameters of adsorption kinetics of Cu2+