Background: Radiotherapy is widely used in the treatment of several pelvic neoplasms, Radiation-related adverse events may result in intestinal, urinary, sexual, bone and dermatological disorders, impacting quality of life. The prevalence of radiation proctitis is probably underestimated. The aim of this study is to assess the quality of life associated with radiation proctitis in patients undergoing pelvic radiotherapy.

Methods: A cohort of 40 consecutive patients from an academic institution in Brazil who received pelvic radiotherapy was analyzed. Patients completed questionnaires EORTC QLQ-C30 and EORTC QLQ-PRT20 at the beginning and at the end of treatment. Clinico-pathological features were also collected using standard templates.

Results: Thirty-seven patients were included in the analysis. Thirty-two patients (80%) were male and had prostate cancer. Pelvic radiotherapy was associated with worsening bowel control (p=0.0171) leakage (p=0.0542) and pain (p=0.0074) in EORTC QLQ-PRT20. Patients had increased number of bowel movements per day after treatment (p=0.0036).  Fatigue (p=0.0176) and diarrhea (p=0.0103) increased after radiation therapy. There was no statistical difference in global quality of life in patients who received radiotherapy.

Conclusion: EORTC QLQ-PRT20 questionnaire is suitable for assessing the quality of life related to radiation proctitis in patients undergoing pelvic radiotherapy. This tool may help clinicians in the management and monitoring of treatment-related adverse events of this treatment modality.

The utilization of radiotherapy to treat pelvic neoplasms may result in transient or long term problems arising in non-cancerous tissues. (1). Patients can present anal and/or abdominal pain, rectal bleeding, diarrhea, mucus discharge, fecal incontinence (2). Radiation proctitis (RP) is the result of inflamation and injury of the rectum due to ionizing radiation (3). It is estimated that 50 to 70% of patients who are treated with pelvic radiation will experience acute injury of the rectum and approximately 10 to 20% of them may develop chronic symptoms (4). The true incidence of RP is probably underestimated, as clinical evaluation usually utilises toxicity scales that focus on rectal bleeding and do not asses symptoms as mucus discharge, fecal urgency or incontinence (5).

The evaluation of quality of life (QoL) becomes an important issue for these patients (6) to monitor and manage impact of treatment. The relevence of patient reported outcomes (PROs) has increased in decision-making and, therefore, efforts have been made to standardize these data (7). The European Organisation of Research and Treatment of Cancer (EORTC) Quality of Life Group (QLG) developed the EORTC QLQ-PRT20, a module for RP that could be applied with the core QoL questionnaire EORTC QLQ-C30 (5, 8-10). The questionnaire’s validation was published in 2018 by Halkett et al. and it focuses on QoL related to RP, evaluating bowel symptoms that patients may experience during or after pelvic radiotherapy (9).

EORTC QLQ-C30 and the proctitis module EORTC QLQ-PRT20 questionnaires were completed by the patients at the beginning and at the end of radiotherapy treatment in order to evaluate QoL of patients undergoing pelvic radiation therapy.

The study was approved by the Ethics Committee of Hospital São Lucas of PUCRS. All patients who have agreed to participate signed an informed consent form.

Descriptive statistics were used to summarize patient characteristics. Quantitative variables were described by means while categorical variables were described by absolute and relative frequencies. Association tests for quantitative and categorical variables were analyzed by Wilcoxon rank-sum test and Chi-square test, respectively. The significance level for claim statistical difference between groups was set at 0.05. All Analyses were performed using R version 3.6.3. A multivariate logistic regression analysis was adjusted to assess which patients' characteristics were associated with worse score after treatment.

Of the 40 patients included, 37 (92,5%) completed the questionnaires before and after the treatment. These 3 patients were treated with radiotherapy for prostate cancer and were excluded of the questionnaire’s analysis. (Figure 1)

Multivariate analysis was performed comparing the risk factors associated with radiation proctopathy with the findings of Diarrhea, Fatigue, Pain, Bowel Control and leakage in which a significant difference was identified. Patients who have received treatment dose of RT equal or lower than 45Gy had increased risk of leakage when compared with patients that had treatment dose higher than 60Gy (RR 5.62, CI95% 1.37-23.01, p=0.0386). Table 4.

Adverse events are an important clinical outcome in cancer treatment. This is to our knowledge the first analysis of RP using EORTC QLQ-PRT20 in a population from Latin America who underwent pelvic radiation therapy. This study provides an analysis of patients’ RP symptoms after pelvic radiotherapy. Overall, no significant differences were found in global QoL of patients when assessed using the EORTC QLQ-C30 questionnaire. This is an important endpoint and may reflect advances in the radiation therapy techniques resulting in more tolerable treatments. IMRT and 3DCRT decrease the rates of gastrointestinal toxicity (11) and IMRT is associated with lower deterioration of health-related QoL (12).

The assessment of QoL related to RP through EORTC QLQ-PRT20 questionnaire identified a statistically significant worsening of pain and bowel control after treatment with radiotherapy. In addition, the average number of daily bowel movements increased from 2.3 to 3.4 after radiotherapy, representing a significant 47% increase in bowel movement. This change was also found in the diarrhea scale of the EORTC QLQ-C30 questionnaire, where there was statistically significant increase in scores.

After treatment with radiotherapy, mean scores of pain had increased in 417.74%. Pain may be related to reduced QoL and difficulty performing daily activities. Dabrowska et al. assessed QoL in 83 patients in treatment for prostate cancer using EORTC QLQ-C30 questionnaire. They have reported that 33.7% of patients had pain that hampered performing daily activities and it was strongly correlated with patients' perception of QoL. Fatigue and the need to have a rest during the day was reported in 61.4% of patients, and that was also associated with poorer QoL (13).

In our study, patients had worsening of bowel control scores and increased symptoms related to leakage after radiotherapy treatment of the pelvis. Bowel control was addressed with questions that describe fecal urgency and tenesmus. Fecal urgency has an important impact on patients' QoL. It is one of the most evaluated symptoms in late anorectal changes after radiotherapy, but it is usually not accessed through QoL questionnaires, as shown by Bonet et al. in 2018. They assessed the QoL of 75 patients undergoing pelvic radiotherapy for prostate cancer using two questionnaires, EPIC (Expanded Prostate Cancer Index Composite) and LENT / SOMA (Late Effects of Normal Tissue/Subjective, Objective, Management, Analytic), and included two questions about fecal urgency. Symptoms of fecal urgency increased significantly after treatment, but only the additional questions were able to identify this change. (15).

In the present study, patients who received doses of up to 45 Gy were at increased risk of developing leakage when compared to patients who received doses greater than 60 Gy. This finding is contrary to data found in literature, in which increased doses are associated to increased risk of RP (2). This discrepancy can be attributed to the sample size, especially in the group that received lower doses (4 patients). In addition, dose fractioning and biological equivalence were not evaluated, factors that may influence in intestinal toxicity (11, 16).

In our study, clinical features analyzed did not impact in RP-related QoL, although some patients’ risk factors, such as diabetes and smoking, are known to increase radiation toxicity (20, 21). Akthar et al. found that age older than 63 years, BMI over 29 and current tobacco use were associated with worse bowel function and total dose and higher BMI was associated with late gastrointestinal toxicity (grade 2 or more on Radiation Therapy Oncology Group/Common Toxicity Criteria for Adverse Events scale) (22).

EORTC QLQ-PRT20 questionnaire, unlike the specific pathology modules of the EORTC, is focused on QoL related to side effects and is effective in detecting intestinal symptoms related to radiotherapy. In addition, it is able to identify changes in the symptoms of patients, proving to be adequate in the evaluation of acute changes after pelvic radiotherapy (9). This study was able to detect worsening of symptoms of fecal urgency and leakage, data that are usually underestimated in the assessment of quality of life.

Despite the changes found in the patients' symptoms, it was not possible to identify decrease of the overall QoL in this analysis. Hinz et al. assessed the QoL of 2059 cancer patients using the EORTC QLQ-C30 questionnaire. The overall QoL of patients was similar to that found in the general population when compared by age and sex, although the specific scores related to function and symptoms demonstrate a significant decrease in QoL. These findings may be related to the hypothesis that people who are experiencing difficult circumstances tend to report states of greater well-being. The explanations found can be defense and adaptation mechanisms, which are more related to global aspects of QoL (6).

This study has several limitations. First, we have analyzed a small sample size. Second, the heterogeneity of the sample, with a predominance of male participants and diagnosis of prostate cancer, may interfere with the analysis of the results. Finally, although the EORTC QLQ-PRT20 questionnaire is provided with the translation into Portuguese (Brazil) by EORTC-QLG, validation in Portuguese was not performed in the phase IV study published in 2018. Failure to perform cross-cultural adaptation and validation of the questionnaire for the Portuguese language (Brazil) can influence the interpretation of the questions by the study participants, impacting in quality of life scores.

EORTC QLQ-PRT20 questionnaire is suitable for assessing the quality of life related to radiation proctitis in a Brazilian population of patients undergoing pelvic radiotherapy. It was possible to identify acute changes and symptoms, such as fecal urgency, leakage, pain, fatigue and diarrhea (increased number of bowel movements), related to treatment. Larger studies may contribute to establish the impact of pelvic radiotherapy on the symptoms of radiation proctitis and quality of life of patients undergoing this therapeutic modality. EORTC QLQ-PRT20 questionnaire may help clinicians in the management and monitoring of treatment-related adverse events.

AVAILABILITY OF DATA AND MATHERIALS

The datasets used and/or analysed during the current study are available from the corresponding author.

ETHICS APPROVAL AND CONSENT TO PARTICIPATE

Ethics approval was gained from PUCRS University. Participants were provided with an information sheet and informed consent was gained prior to participating in the study.

The authors declare that they have no competing interest.

This study was funded by MKS. 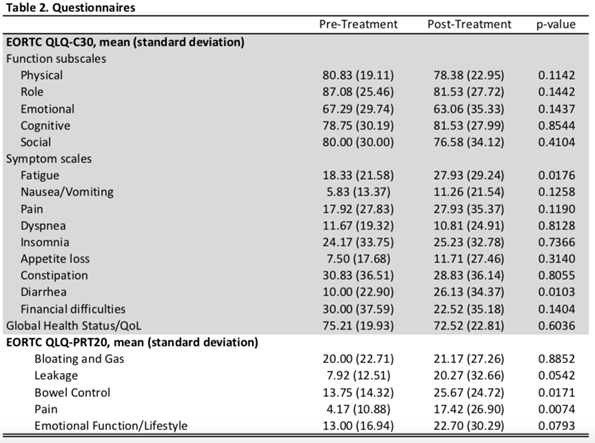 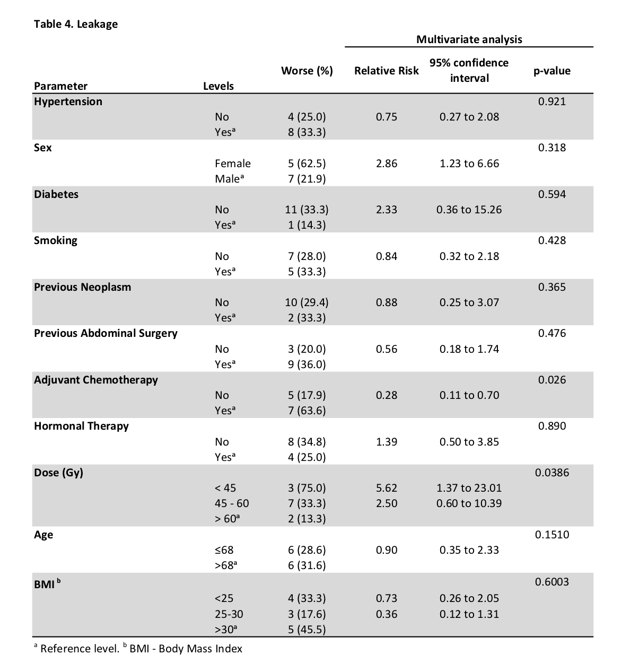