Background: Mild hyponatremia (serum sodium 130-135 mEq/L) is a common electrolyte disorder in the elderly. However, its association with both sarcopenia and cognitive function remains to be clarified. Therefore, here we investigated the association of mild hyponatremia with skeletal muscle mass, physical function, and cognitive function in the elderly.

Conclusions: Our results suggest that elderly people with even mild hyponatremia had physical function impairment and depressive mood.

Hyponatremia is the most common electrolyte disorder in the elderly. It occurs in about 7% of all otherwise healthy people aged 55 years or more, with incidence increasing significantly with age. Hyponatremia in the elderly has many causes, including use of medication such as diuretics and antidepressants, syndrome of inappropriate antidiuretic hormone secretion, malnutrition, and comorbidities such as cardiac disease.(1) In most cases though, the symptoms of hyponatremia are mild and related symptoms are subtle, so it often goes unnoticed by patients and physicians.

We enrolled 2962 elderly participants with normonatremia (SNa 136-145 mEq/) and 75 with hyponatremia (SNa 130-135 mEq/L) aged ≥ 70 years who visited the National Center for Geriatrics and Gerontology (NCGG) for assessment of memory disorder between September 2010 and November 2017. None of the participants had any severe symptoms such as nausea, vomiting, confusion, or seizures, and all were able to carry out at least 1 of the following 3 physical function tests: grip strength (GS), walking speed (WS), and the one-leg standing (OLS) test. To eliminate pseudohyponatremia and the effect of disease on physical or cognitive function, the following inclusion criteria were adopted: (1) no history of stroke; (2) no pseudohyponatremia (TP ≤ 8.0, Glu ≤ 400, TH < 500, and T-cho ≤ 280); and (3) not taking medication for Parkinson’s disease (e.g., L-dopa, dopamine agonist, trihexyphenidyl, and amantadine).

The study was approved by the NCGG Ethics Committee. All participants provided informed consent before enrollment in the study.

Physical function was assessed by measuring GS, WS, and OLS time. Muscle strength was from upper extremity strength measured with a digital force gauge (ZP 500N; Imada, Toyohashi, Japan).(12) The best GS (kg) was determined, with low muscle strength defined as < 28 kg in men and < 18 kg in women, in accordance with the Asian Working Group for Sarcopenia (AWGS) criteria.(11) Velocity was determined by measuring normal WS, with poor physical performance defined as WS < 1.0 m/s.(11) Postural function was assessed using the OLS test, which measures the time in seconds (up to a maximum of 60 s) that participants can stand unassisted on one leg for as long as possible with their eyes open. The best score was used for the analysis.(9) Impaired postural function was defined as OLS time < 15 s according to the locomotive syndrome criteria.(13) Sarcopenia was defined as low SMM, low muscle strength, and/or low physical function.(11)

Cognitive function was assessed with the Mini-Mental State Examination (MMSE),(14) executive function with the Frontal Assessment Battery (FAB),(15) working memory with the Digit Span subtest (forward and backward) of the Wechsler Adult Intelligence Scale,(16) attention with the category fluency subtest of the Hasegawa Dementia Rating Scale-Revised,(17) and memory with the Logical Memory II subtest of the Wechsler Memory Scale-Revised (WMS-R).(18)

The Chi-squared test and Mann–Whitney’s U test were used to investigate differences in characteristics between mild hyponatremia and normonatremia. One-way analysis of covariance (ANCOVA) was used to identify significant differences between the 2 groups in SMI, the 3 physical function test scores, and all the neuropsychological test scores after controlling for covariates. Then, multiple logistic regression analysis was conducted to examine the correlation between mild hyponatremia and sarcopenia, SMI, physical function test scores, and all the neuropsychological test scores. Cutoff scores for these dependent variables were based on the studies mentioned above. All the variables whose p-value was < 0.2 in Table 1 were selected as covariates for both ANCOVA and multiple regression analysis as shown under Table3 and 4. All analyses were performed using SPSS Statistics for Windows ver. 26.0 (IBM Corp., Armonk, NY). A p-value < 0.05 was considered significant. 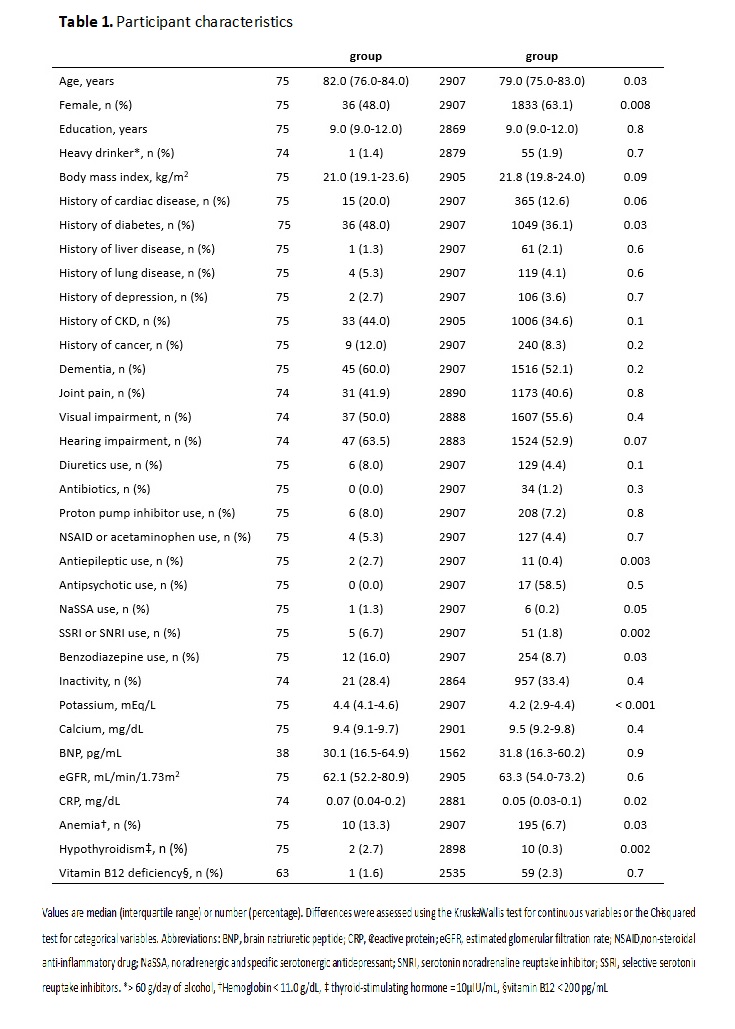 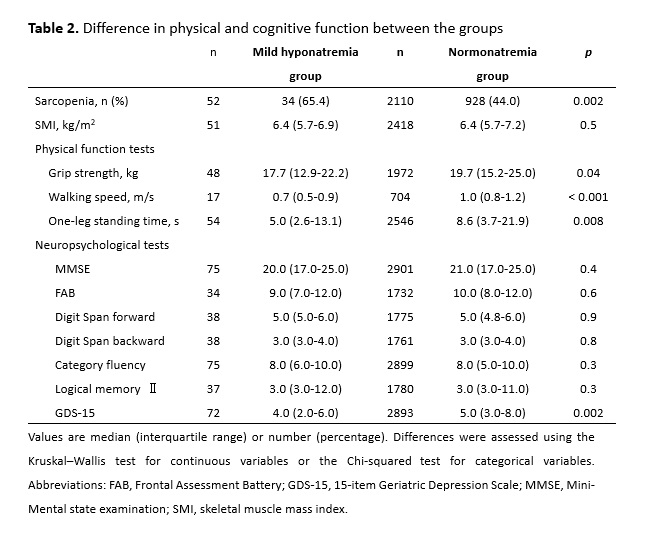 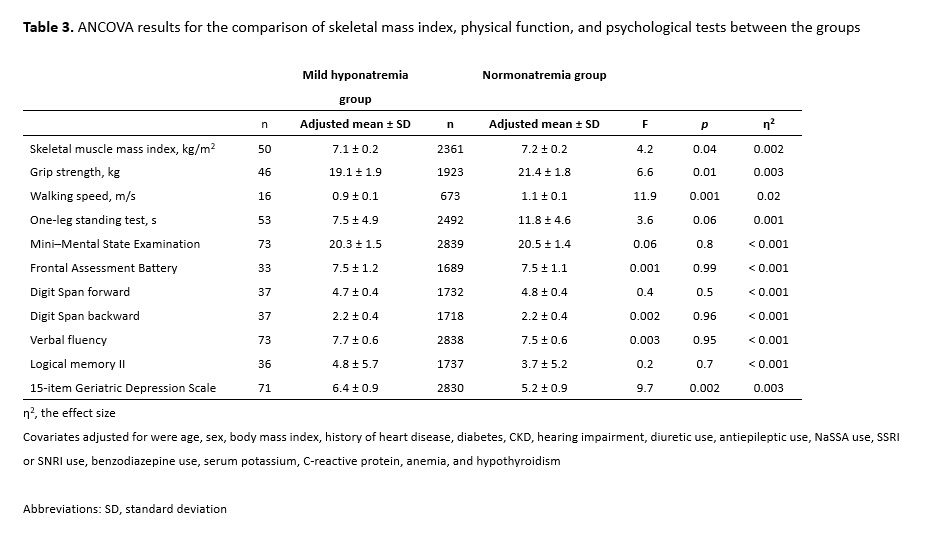 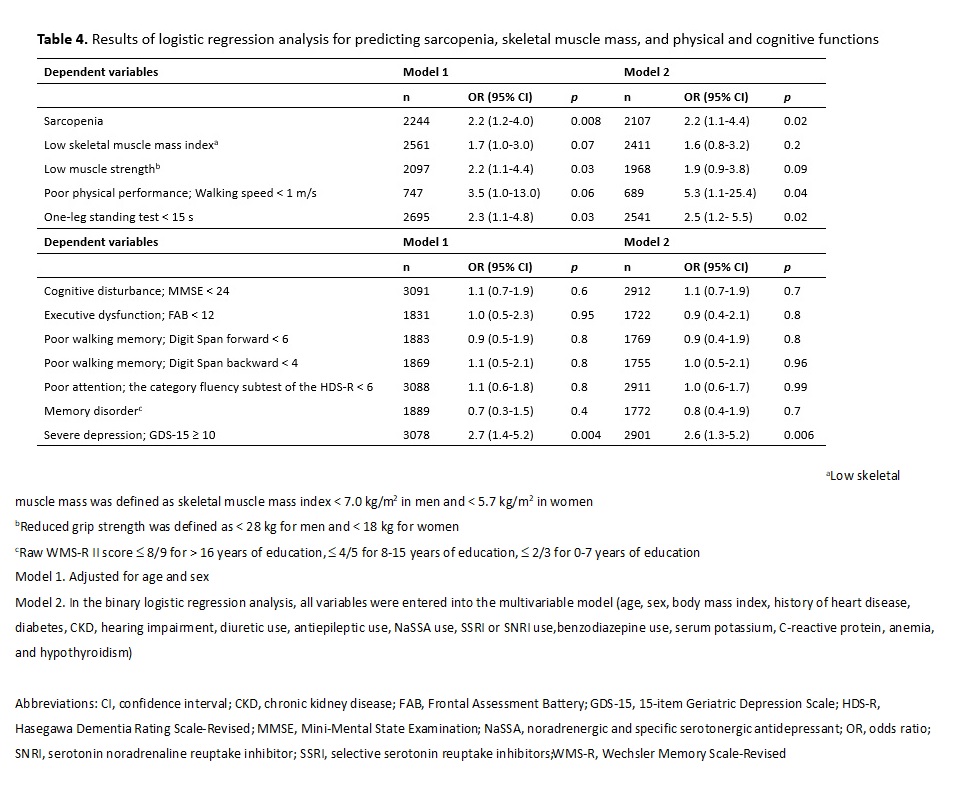 Correlation between mild hyponatremia and SMM and physical function

The present study demonstrated that elderly people with even mild hyponatremia had gait disturbances and balance impairment. Previous studies demonstrated that chronic hyponatremia causes gait disturbances in both rats(5) and humans.(2) The mechanism behind these observations is yet to be determined. However, for the mechanism whereby hyponatremia contributes to gait dysfunction and balance impairment, if we look at it from the viewpoint of the central nervous system (CNS), the brain cells adapt to hyponatremia by swelling with the loss of osmolytes, such as glutamate,(23) which is a neurotransmitter involved in gait and balance function.(4) Rerelease of glutamate from the cytosol to extracellular space contributes to excessive activation of neuronal glutamate receptors, causing excitotoxic cell damage and death in the CNS.(24) However, it remains to be elucidated what severity of hyponatremia, and particularly whether mild hyponatremia, causes these consequences, which could lead to slow WS and balance dysfunction.

On the other hand, we found that muscle strength as measured by GS was significantly different between the mild hyponatremia and normonatremia groups of elderly participants, but when using the AWGS cutoff value for sarcopenia, the logistic regression model showed that the association between mild hyponatremia and GS was not significant. Although Cairns et al. observed a 10% decrease in muscle strength when the sodium concentration was decreased from 147 to 60 mmol/L in mice,(25) Vandergheynst et al. did not observe any significant difference in GS when the sodium concentration was increased from 127.7 ± 2.5 mmol/L to 136.1 ± 1.8 mmol/L in humans.(26) Mild hyponatremia itself is correlated with muscle strength, but it’s impact on GS may be insufficient to bring the GS under the cutoff point.

Although we included many covariates, we might have missed some unmeasured or unknown potential confounders. In addition, we did not determine the causes or chronicity of mild hyponatremia. The duration of hyponatremia or severity of comorbidities may be additional risk factors for physical dysfunction or depressive mood. Hyponatremia could be a marker of severity in these unmeasured underlying illnesses and might signal the presence of physiologic derangements or comorbidities.

This study also found that mild hyponatremia was associated with depressive mood, but not with other neuropsychological tests scores. To our knowledge, this study is the first to report an association between mild hyponatremia and depressive mood in the elderly. Previously, the efficacy of tolvaptan was evaluated in patients with hyponatremia. Serum sodium concentrations increased more in the tolvaptan group than in the placebo group and a significant improvement was observed in the tolvaptan group on the Mental Component Summary (for vitality, social functioning, emotionally limited accomplishment, calmness, and sadness) of the Medical Outcomes Study 12-item Short-Form General Health Survey.(30) The mechanism has yet to be determined, but some studies have suggested a correlation between depression and glutamate, whose release from brain cells to the extracellular space may be mediated by hyponatremia.(31, 32) Anti-glutamate agents are known to have antidepressant effects in patients with depression.(33) Alternatively, elderly individuals with depressive mood might not have sufficient appetite to consume an appropriate amount of dietary sodium.

This study used detailed neuropsychological test results and is the first to reveal a correlation between mild hyponatremia and depressive mood. A strength of the study is its large sample, which may have minimized many possible confounders, including pseudohyponatremia, many types of medication, and past histories.

However, there are also some limitations. Despite the large sample size, few individuals with hyponatremia undertook the physical function tests, especially for WS. This left us with a small sample of mild hyponatremia, which did not allow us to adapt another mild hyponatremia cutoff, such as 134 mEq/L. Next, as mentioned above, we might have missed some unmeasured or unknown potential confounders; for example, we did not obtain enough data about locomotor system disease or endocrine disease to consider their potential effects. Lastly, this is a cross-sectional study and the specific mechanisms underlying the association of mild hyponatremia with physical function and depressive mood remain to be investigated.

Ethic approval and consent to participate

This study was approved by the ethics committee of the National Center for Geriatrics and Gerontology, Japan (Approval No. 1415). Written informed consent was obtained from all subjects or their legally authorized representatives prior to enrollment in the study.

The data supporting the conclusion of this article may be made available by the corresponding author upon reasonable request.

All authors declare that they have no competing interests, except that Hiroyuki Umegaki is an Associate Editor of BMC Geriatrics.

This study was partially supported by grants from Research Funding of Longevity Sciences (30-1) of the National Center for Geriatrics and Gerontology, Japan. The funding sources were not involved in the study design, collection, analysis, interpretation of data, or writing of the paper.

CF, HF, and YS formed the research question. TS1 coded the data. CF conducted the analysis with input from SS, TS2, and CH. CF wrote the manuscript and HU, MK, KT, and TS2 reviewed the article. All authors approved the final draft.