The [3,3]-rearrangement of aryl iodanes with α,β-unsaturated oxazolines has been developed by merging Morita-Baylis-Hillman (MBH) process into the rearrangement reaction. The method allows for the exclusively E-selective synthesis of a wide variety of valuable α-aryl α,β-unsaturated oxazolines which can be difficult to synthesize with other known methods. Experimental and computational mechanistic studies unraveled that the reaction proceeds via the assembly of both coupling partners followed by MBH-type addition to form rearrangement precursor, [3,3]-rearrangement, and stepwise E1cb-elimination. The E-selectivity of the reaction is favored both kinetically and thermodynamically.

Initial discovery and optimization. To verify our hypothesis, we studied the reaction of PhI(OAc)2 1a with α,β-unsaturated carbonyl derivatives including α,β-unsaturated aldehyde 2a, ketone 2b, ester 2c, amide 2d, and 2-oxazoline 3a, as shown by entries 1-5 in Table 1. DABCO, which is often used as Lewis base for the MBH reaction, was employed for our initial exploration. Although no desired products 4a-4d could be determined from the reactions of 2a-2d, α,β-unsaturated oxazoline 3a was found to be promising for the transformation albeit giving desired product 5aa in low yield (19%). The feasibility of oxazoline 3a could be attributed to its higher nucleophilicity than other unsaturated carbonyls, which enhanced its interaction with aryl iodanes. Due to part of the same effect, the use of 2-oxazolines also significantly broadened the reaction scope of our previously studied [3,3]-rearrangement of aryl iodanes as depicted in Figure 1B. 23 Further studies revealed that the choice of bases was critical to the reaction. Pyridine derivatives were more effective than aliphatic tertiary amines (entries 6-9). This was probably due to the lack of β-hydrogens of pyridines, thus avoiding undesired oxidation by hypervalent iodine species. Further optimization of the reaction temperatures and reaction times identified the best conditions giving 5aa in 71% yield (entry 12).41

Reaction scope. With the optimized conditions in hand, we investigated the reaction scope with respect to α,β-unsaturated oxazolines 3 and aryl iodanes (Table 2). To our delight, a wide variety of α,β-unsaturated oxazolines 3 were suitable for the process. Regardless of the length of the terminal alkyl chains, oxazolines 3b-3d smoothly afforded 5ab-5ad in similar yields (69-72%). The method was also applicable to bulky oxazolines 3g-3k bearing β-cyclopropyl, cyclopentyl, cyclohexyl, cyclohexenyl, and piperidine groups that afforded stereohindered alkenes 5ag-5ak in synthetically useful yields (47-57%). Remarkably, β,β’-dimethyl substituted oxazoline 3l could even furnish tetrasubstituted alkene 5al, albeit in a low yield (25%). In addition to β-alkyl oxazolines, β-aryl oxazoline 3m also proved suitable for the process giving 5am in a modest yield (49%). Further studies demonstrated that the reaction possessed excellent functional group (FG) compatibility. An array of FGs including alkene groups (5aj, 5ax and 5az), protected amines (5ak and 5aa’), alkyl/aryl halides (5an, 5at, 5au and 5ay), ethers (5ao-5aq,  5av and 5aw), esters (5ar-5au and 5ax-5az), propargyl groups (5av), and nitrile groups (5aw) were all well tolerated in the reaction. Notably, alkene, alkynyl and heteroaryl groups that could be readily oxidized by hypervalent iodines were also tolerated here. This unconventional FG compatibility could be attributed to the relatively high affinity of oxazolines with iodine (III) species, which inhibited the undesired oxidation of electron-rich FGs. In addition, the highly electrophilic α,β-unsaturated esters (5ax and 5az) that can be challenging substrates for conventional cross-coupling reactions were also compatible with the current reaction conditions. The broad scope of FGs adopted in the reaction provided a versatile platform for further elaboration of the products and demonstrated the practicability of the protocol.

Next, the scope of aryl iodanes 1 was explored under the optimum conditions (Table 2). para-Alkylated aryl iodanes (5bb and 5cb) were slightly more productive than those bearing para-halide substituents (5db-5gb). Impressively, aryl iodanes 1 bearing functional groups including alkyl/aryl halides (5db-5gb, 5rb and 5vb), N-protected amines (5ib and 5sb-5ub), esters (5ib and 5pb-5rb), ethers (5lb-5ob), and nitriles (5ob) were all suitable for the reaction. Even highly reactive benzylic chlorides (5hb) and α,β-unsaturated esters (5qb) that can be problematic FGs for conventional arylation reactions could be tolerated in the reaction. Aryl iodane 1j with electron withdrawing groups (benzoyl group) failed to furnish any desired products 5jb under optimum conditions. This was probably due to the relatively low nucleophilicity of this electron-poor substrate, which made the electrophilic activation of 1j with TMSOTf more difficult. However, raising the activation temperature from -78 °C to rt, 1j still afforded 5jb albeit in a low yields (33%). Remarkably, meta-substituted aryl iodanes exclusively produced less hindered products (5kb-5wb) demonstrating an excellent regioselectivity. It is also impressive that sterically hindered substrates furnished intriguing polysubstiuted arenes (5xb-5zb) without loss of efficiency.  In addition to phenyl iodanes, the method could also be applicable to naphthalene and thiophene iodanes (5a'b and 5b'b) albeit giving relatively low yields.

Experimental and computational studies. To verify whether the reaction actually proceeded in a way we envisioned in Figure 1D and understand the E-selectivity of the reaction, we combined DFT calculations (Fig. 2, see SI6 for computational details) and control experiments to study the reactions of 1a with E-3c and Z-3c ( Fig. 3) .

Figure 2A shows the reaction pathways leading E-3c to the product E-5ac. The reaction takes place via sequential three stages. After TMSOTf activates PhI(OAc)2 to give PhI(OTf)2,42-45 stage I generates an intermediate IM2 for the subsequent rearrangement process. The stage takes place by assembling PhI(OTf)2 with E-3c to give EIM1,46-49 followed by a MBH-like nucleophilic addition of 4-methylpyridine (denoted as Py) to an alkene carbon of EIM1. As depicted in Figure 2, Py can attack EIM1 from either side of the alkene plane via (R)ETS1 or (S)ETS1, leading to (R)IM2 or (S)IM2. Stage II from IM2 to IM4 forms a C-C bond via dearomative [3,3]-sigmatropic rearrangement through TS2, followed by rearomatization via TS3. Finally, a stepwise E1cb elimination (stage III) converts IM4 to IM5 by deprotonation via TS4 first and then Py elimination via TS5, giving the final product E-5ac. It is worth noting that the N-protonation of oxazoline with HOTf (generated in stage II) of IM4 is crucial for the E1cb elimination. For example, in the absence of the N-protonation, the deprotonation of (S)IM4 has a barrier of 27.0 kcal/mol, which is much higher than the 13.9 kcal/mol from (S)IM4 to (S)TS4.

Energetically, as the reaction proceeds, the system becomes more and more stable with an overall exergonicity of 96.6 kcal/mol. Among all the elementary steps, the rate determining step lies at the deprotonation of IM4, with a barrier of 12.6 and 13.9 kcal/mol for (R)- and (S)-pathway, respectively. The favorable energetics rationalizes why the reaction could proceed smoothly, thus corroborating our strategy using MBH-like addition to generate a reactive rearrangement precursor (i.e. IM2). It’s worth noting that the molecular weight of the cation of IM4 (435) could be detected by mass spectrometry. Unfortunately, we were unable to further confirm the structure of IM4 by NMR spectrum even after great efforts.50

Using the (R)-pathway in Figure 2A as a representative, we next understand the E-selectivity of the reaction. Along the (R)-pathway, all structures from (R)IM2 to (R)IM5 were optimized with restriction to the conformations with n-Pr and oxazoline groups in a trans arrangement, thus giving E-5ac. To gain insight to the E-selectivity, we derived how Z-5ac can be produced by considering other possible conformations of IM5, in addition to the trans (R)IM5 we already considered in Figure 2A.  As illustrated in Figure 2C, we were able to locate another cis conformation (i.e. (RZ)IM5) of IM5, which can lead to Z-5ac by crossing (RZ)TS5. However, because the two conformations can convert each other easily with a barrier (R)TS6 lower than (R)TS5 and E-5ac is also lower than Z-5ac, the formation of E-5ac is favored in terms of both kinetics and thermodynamics, explaining the exclusive E-selectivity of the reaction. It should be noted that all structures prior to IM5 should also have other conformations, but because the two conformations of IM5 can convert each other easily, the conformations of these structures prior to IM5 cannot affect the selectivity of the reaction. Similar discussion can be applied to the (S)-pathway (see Fig. 2D), which show that E-5ac is also both kinetically and thermodynamically favored product. Thus, the reaction exclusively gives E product.

After understanding the reaction of E-3c, we considered the selectivity of the reaction if Z-3c is used.  Figure 2B shows the stage I of Z-3c. It can be observed that the stage I of Z-3c merges to that of E-3c at (R)IM2 and (S)IM2, respectively. This is understandable, because the MBH-like addition of Py converts the sp2 hybridized carbon to the sp3 hybridized carbon. Therefore, the configuration of 3c cannot affect the selectivity of the reaction. To verify the prediction, we used E-3c and Z-3c to carry out the reaction, separately (eq 1 and eq 2 in Fig. 3). Indeed, under the standard experimental conditions, no matter which configuration 3c adopts, the reactions converged to E-5ac with comparable yields. Expectedly, this should hold true for other substrates in Table 2.

Applications and attempts of [5,5]-rearrangement. To our delight, the method followed by hydrolysis of oxazolines could be used for gram-scale synthesis of α-aryl α,β-unsaturated carboxylic acids 6a and 6b with synthetically useful yields (Fig. 4A). The remaining iodide atom allowed for elaborating alkenes with a boryl group (7) or vinyl ester moieties (8a and 8b), and incorporating an alkynyl group into phenyl ring (9a and 9b) (Fig. 4B). The product 6 could also be readily converted to intriguing arylcyclopropanes (10a and 10b) and α-aryl-β-amine ester (11) via conventional cyclopropanation and Michael addition, respectively. In addition, the reduction of 6b afforded valuable 2-aryl allylic alcohol 12. Encouraged by the success of the MBH-type [3,3]-rearrangement, we attempted to examine the possibility of corresponding [5,5]-rearrangement by employing 1,3-diene-1-oxazoline 3b' (Fig. 4C). Excitingly, the reaction indeed afforded para-C-H functionalized product 13 (31% yield) with ortho-functionalized product 5ab' (36% yield).51-53 Although suffering from a poor selectivity, this preliminary result demonstrated the feasibility of applying the current protocol for developing MBH-type [5,5]-rearrangement reactions.

In summary, inspired by the Morita-Baylis-Hillman (MBH) reaction, we have developed the [3,3]-rearrangement of aryl iodanes with α,β-unsaturated oxazolines. The method allows for the mild synthesis of a wide variety of valuable α-aryl α,β-unsaturated oxazolines in a redox-neutral manner. In addition to the excellent chemo- and regioselectivity, the reaction showed a remarkable E-selectivity. Experimental and computational mechanistic studies revealed that the transformation involves the assembly of both coupling partners, MBH-like addition triggered [3,3]-rearrangement, and E1cb elimination to give the final products. The formation of E-product is both kinetically and thermodynamically favorable. Further exploration of MBH-type rearrangement reactions is currently under way in our laboratory.

General procedure for [3,3]-rearrangement of aryl iodanes with α,β-unsaturated oxazolines. To a solution of aryl iodane 1 (0.5 mmol) in DCM (5 mL) was added TMSOTf (181 μL, 1.0 mmol) at -78 oC. After stirring for 15 min, α,β-unsaturated oxazolines 3 (1.0 mmol) was added to the mixture. The mixture was then stirred for another 15 min, and then 4-methylpyridine (93 mg, 1.0 mmol) was added. The reaction mixture was gradually warmed to -10 oC. After stirring for 24 h, the mixture was treated with saturated aqueous NaHCO3 solution and extracted with DCM. The organic layer was dried over Na2SO4 and concentrated. The obtained residue was purified by silica gel column chromatography to afford the title compound 5. Note that TMSOTf was added at room temperature for the reaction of aryl iodane 1j.

Full experimental details, characterization data, and NMR spectra for all new compounds are available within this paper and its Supplementary Information.

B. P. thanks the Key Laboratory of the Ministry of Education for Advanced Catalysis Materials at Zhejiang Normal University, Natural Science Foundation of Zhejiang Province (LR20B020001). Z.X. W. acknowledges the support of NSFC-21773240.

B. P. conceived and supervised the project. L. Z. and W. B. developed the reaction and performed experiments with W. P., D. L. and L. K. DFT calculations were conducted by Y. L. and Z-X. W. The manuscript was prepared by B. P. and Z-X. W. 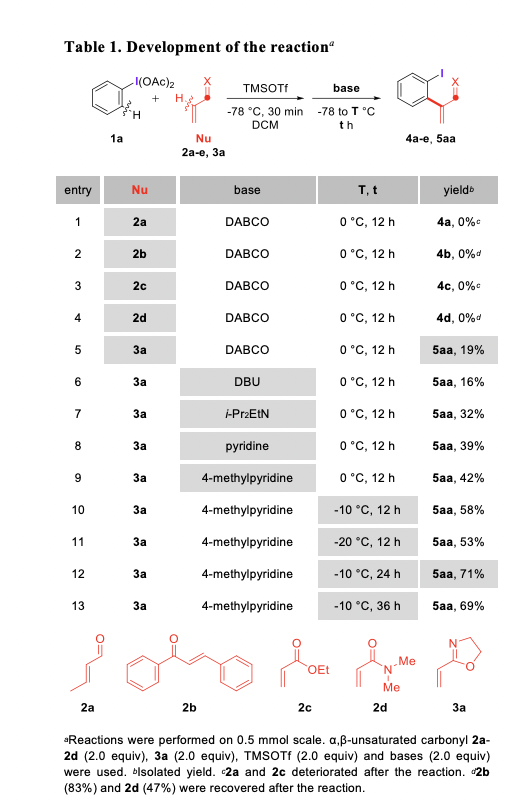 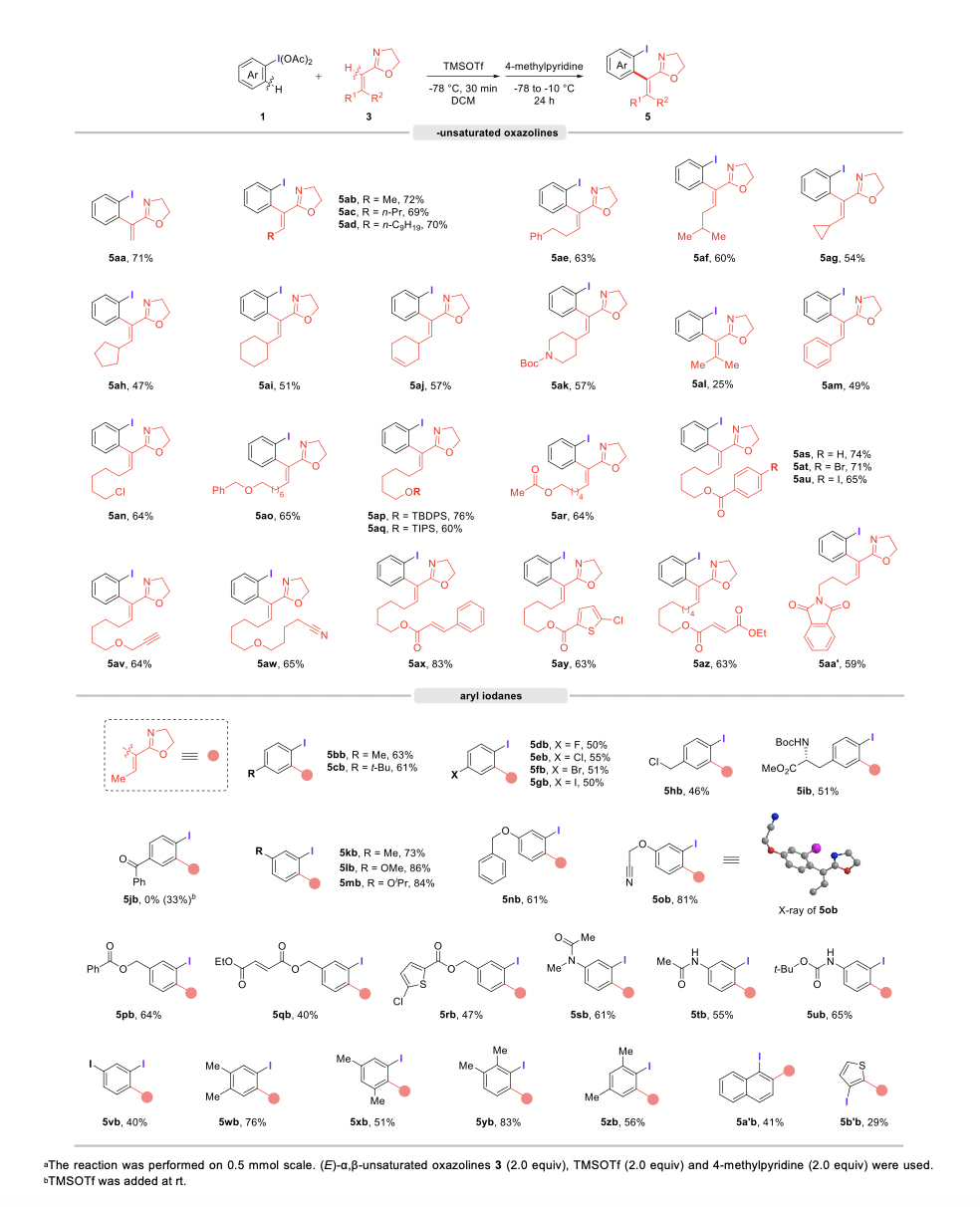