Associations between depressive symptoms and geriatric syndromes in community-dwelling older adults in Japan: a cross-sectional study

It is estimated that 7.2% of community-dwelling older adults in worldwide have major depression. This cross-sectional study aimed to investigate the relationship between geriatric syndromes and depressive symptoms.

Our findings suggest that depressive symptoms are associated with frailty and pre-frailty in community-dwelling older adults in Japan.

Depression is a common psychiatric disorder that affects approximately 322 million people worldwide [1]. It is estimated that 7.2% of community-dwelling older adults in worldwide have major depression, and 17.1% had depression throughout their lives [2]. Factors associated with depression in old age include deterioration of life functions [3] and decline in physical [4, 5] and cognitive functions [6]. Other factors related to living conditions, such as living alone and being divorced, have also been reported [7]. Depressive symptoms are associated with adverse health outcomes, including impairment [8], mortality [9], and poor quality of life [10].

Previous studies with community-dwelling older adults have reported associations between depressive symptoms and physical [11, 12] and cognitive functions [13]. In the 3-year prospective cohort study with 680 community-dwelling older adults by Yoshida et al. [12], continued physical activity in old age was the only factor associated with a reduction in the incidence of depressive symptoms. A previous 14-year prospective study in 1,417 older adults with no chronic illness found that exercise habits were significantly associated with depression [11]. Another study identified depression as a risk factor for dementia [13]. To date, depressive symptoms have been evaluated from the perspective of exercise or cognitive function alone, but not both.

Therefore, we conducted a cross-sectional study of typical geriatric syndromes—including frailty, sarcopenia, and locomotive syndrome—to examine their association with depression. Our findings may contribute to the prioritization of the clinical evaluation of geriatric syndromes and highlight the importance of focusing on the items included in the geriatric syndromes, such as muscle strength, muscle mass, mobility, fatigue, and weight loss.

Data from the Kaizuka Dementia Prevention Study 2018 and 2019 were used in this cross-sectional study. The Kaizuka Study was a community-based health check conducted in collaboration with the Osaka Kawasaki Rehabilitation University (Kaizuka City Office) and Cognitive Reserve Research Center in Osaka, Japan.

The inclusion criteria for participation were being residents of Kaizuka City and aged ≥ 60 years at the time of the study. For recruitment, a leaflet was inserted in a newspaper and posted at the public hall, and interested participants applied telephonically. Exclusion criteria were having a history of depression (n = 13), being aged 60 or under (n = 25), and missing data on the survey (n = 7). Finally, data from 363 participants (mean age 73.6 [SD ± 6.6] years; women n = 275 [75.6%]) were analyzed (Fig. 1).

We used the Japanese version of the Geriatric Depression Scale 15 (GDS-15) to determine the existence of depressive symptoms among the participants. The GDS-15 is a self-report instrument comprising 15 items that assess the individual’s mood [27, 28]. A cut-off point of 4/5 was used to define depressive symptoms in this study.

We instructed participants to walk 6.4 m (divided into two 2-m zones at each end and a 2.4-m zone in the middle) at a speed they found comfortable. The time needed (s) to pass the 2.4-m middle zone was measured to calculate the gait speed (m/s) [31]. Participants could use a cane or walker if they were unable to walk without help. We used the average of five gait trials.

We used the Japanese version of the Mini-Mental State Examination (MMSE), which is widely used to assess cognitive function and screen for cognitive impairment [23, 32]. MMSE scores range from 0 to 30, with lower scores representing weaker cognitive function.

We measured locomotive syndrome using the two-step test. Participants were asked to take two steps forward as far as possible and stop after the second step [33]. Participants were retested if they lost balance during the test or if they did not stop after the second step. They were not allowed to jump. The test was carried out until two results were obtained. The maximum length (m) covered in the two tests was selected and divided by the participant’s height (m). Results were categorized as robust (≥ 1.3 m/m), Locomo1 (< 1.3 m/m), and Locomo2 (< 1.1 m/m), based on the Japanese Orthopedic Association criteria [16].

The definition of frailty used in this study [14] has been described in detail elsewhere. The components of frailty, as defined by Fried et al. [14], are as follows: weight loss, weakness, exhaustion, low activity level, and slowness. Weight loss was determined using the question “Have you lost 2 kg or more in the past 6 months?” taken from the Kihon Checklist, a self-report, comprehensive health checklist. Exhaustion was determined based on a response of “yes” to another question from the Kihon Checklist, “In the last 2 weeks, have you felt tired for no reason?” [34]. Weakness was defined as low muscle strength based on the grip strength assessment described earlier. Low activity level was defined as a negative response to the following questions: “Do you engage in moderate levels of physical exercise or sports aimed at health?” and “Do you engage in low levels of physical exercise aimed at health?” Slowness was defined as a walking speed of < 1.0 m/s. Participants were classified as “robust” if they had none of these symptoms, “pre-frail” if they had one or two symptoms, and “frail” in case of three or more symptoms [35].

All analyses were performed using IBM SPSS Statistics version 24.0 (IBM Corp., Armonk, NY, USA). P-values < 0.05 were considered to be statistically significant. To compare the depressive and non-depressive groups, we used Pearson’s χ2 tests for categorical variables, Student’s t-test for continuous variables, and Mann–Whitney’s U-test for ordinal variables. Non-linear logistic regression analyses were performed to examine the association between sarcopenia, frailty, locomotive syndrome, and depressive symptoms. There were two regression models: one using crude odds ratios (ORs), while the other using adjusted ORs. Presence of depressive symptoms was the dependent variable in both models.

The recent interest in “overlapping comorbidities,” specifically, frailty and depression, has given rise to reviews indicating a positive association between the two [39–41]. A study with 958 adults older than 60 years found that depressive symptoms had a significant association with frailty (OR 1.8), which supports our results [42]. Another longitudinal study reported that frailty is predictive of future depressive symptoms [43].

Previous studies on frailty and depression as overlapping geriatric syndromes reported that the latent factors of frailty that were significantly correlated with depression were biological syndrome (ρ = 0.68, p < 0.01), functional domains (ρ = 0.70, p < 0.01), and frailty index (ρ = 0.61, p < 0.01) [44]. The biological syndrome model of frailty was operationalized in terms of five criteria proposed by Fried and colleagues [14], who analyzed data from the Cardiovascular Health Study. The frailty index is a count of 70 clinical deficits, including presence of diseases, difficulty in performing daily activities, and other physical and neurological signs and symptoms. In terms of functional domains, frailty was defined as functional impairment in at least two of four domains: physical, nutritive, cognitive, and sensory. For example, a previous study [45] reported that models of frailty and depression with differing numbers of classes that represent the severity of the syndromes (two in frailty; three in depression) provided a better fit to their data, although the constructs shared a substantial amount of variance (latent kappa coefficient = 0.66); moreover, these also helped identify overlapping subgroups of participants. Using confirmatory factor analysis in the Health and Retirement Study among 3,453 participants, a moderate correlation (0.68) was found between latent categorical models of depression and the “biological definition” of frailty [46]. These findings suggest that pre-frailty and frailty are associated with depressive symptoms. Frailty comprises motor functions such as walking speed and grip strength, and these can be improved by exercise therapy, even in older adults [47]. Therefore, it may be possible to use non-pharmacological interventions to reduce depression in older adults.

Contrary to expectations, no geriatric syndromes other than frailty were associated with depressive symptoms. Although locomotive syndrome is an independent risk factor for depression [16, 26], in this study we found no significant difference between the non-depressive and depressive groups. However, an earlier study based on the 25-item Geriatric Locomotive Function Scale (GLFS-25) reported a correlation between depressive symptoms and locomotive syndrome among 224 community-dwelling older adults [26]. The reason for this discrepancy may be that the GLFS-25 questionnaire includes items on psychological characteristics, such as pain and anxiety, which may be better measures of depressive symptoms.

Our study had some limitations. First, we used screening tools rather than full diagnostic procedures to assess depressive symptoms. Second, the cross-sectional design of the study precluded the assumption of a causal relationship between depressive symptoms and frailty. Third, study data were obtained from a single city, which limits the generalizability of the results, as meaningful activities in daily life are also affected by geographic characteristics. Finally, the 363 older adults enrolled represented approximately 3% of older adults living in urban areas and were not randomly selected. Therefore, sampling bias cannot be ruled out.

This study was approved by the Ethics Committee of the authors’ affiliate institution. Written informed consent was obtained from all participants in accordance with the tenets of the Declaration of Helsinki.

HN, FT, MH, TO, and RI collected data, organized the dataset, and provided advice for consideration. MN contributed to the planning of research plans and survey items. TM organized the entire study. All authors read and approved the final manuscript.

We would like to thank the individuals who participated in data collection and data entry, as well as the Kaizuka Municipal Office for their valuable support and participation. 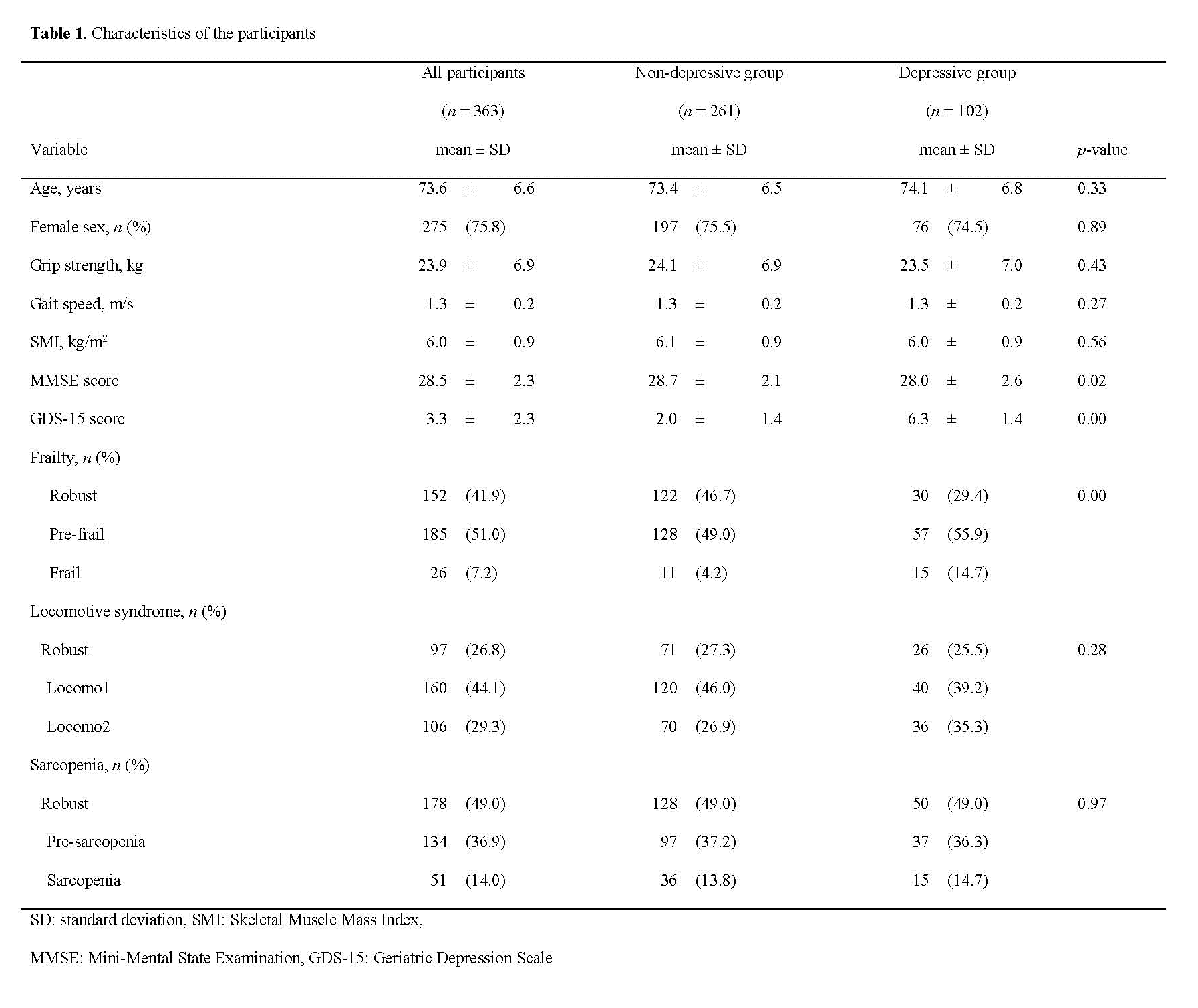