Five electronic databases (PubMed, EMBASE, CNKI, Wanfang database and the Cochrane Library) were searched from their start dates to July 2020 to identify all relevant studies. Our main endpoints were Constant–Murley score (efficacy), and method-related complications and revisions (safety). Cochrane Collaboration’s RevMan 5.3 was used for meta-analysis.

In general, for treatment of complex PHFs, LPF was superior to HAP in postoperative shoulder joint function assessed by the Constant–Murley score. However, there was no significant difference in efficacy for patients with four-part fractures or those older than 60 years of age. Since LPF was associated with significantly higher revision and postoperative complications rates, we suggest that HAP should be considered the preferred procedure for patients older than 60 years with four-part proximal humeral fractures.

Proximal humeral fracture (PHF) is one of the most frequent fractures in adults, especially elderly women [1–2]. Its incidence rate increases with age and numbers are increasing yearly as the population ages [3–4]. It is closely associated with osteoporosis and falls [1,3−4], and is the third most common osteoporotic nonvertebral fracture type after hip and forearm fractures [1, 3, 5].

Most simple PHFs are non-displaced or minimally displaced fractures, and can be treated conservatively with good outcomes [6]. Complex PHFs, however, are often complicated by injury to the humeral head blood supply, to the rotator cuff and to other soft tissues, and surgical treatment is necessary if the patient's condition allows it. There are several operative techniques, all with different advantages and disadvantages, including pinning, locking plate fixation (LPF), hemiarthroplasty (HAP) and reverse shoulder arthroplasty.

With the recent development of prosthetic/fixation devices and improvements in surgical techniques, LPF and HAP have become widely used for the surgical treatment of complex PHFs [7]. The clinical effects of these two surgical techniques have been compared in retrospective studies and randomized controlled trials (RCTs), but with no firm conclusion that one was better or safer than the other [8–24]. The purpose of this meta-analysis was to evaluate these two methods for effectiveness and post-surgical complications including the need for revision surgery.

Published studies were retrieved from five databases (PubMed, EMBASE, CNKI, Wanfang database, and the Cochrane Library) from their start dates to June 2020. Search terms including “proximal humerus fracture”, “internal fixation”, “locking plate fixation”, “hemiarthroplasty”, and “arthroplasty” were used individually and in combination. There were no restrictions on publication language.

The Cochrane Collaboration’s RevMan 5.3 software was used to perform the statistical analysis and to establish forest plots. Continuous variables are expressed as mean differences (MDs) or standard mean differences (SMDs) with 95% confidence intervals (CIs). For publications that provided only medians and ranges, the method reported by Hozo et al. [29] was used to calculate means and standard deviations. Dichotomous variables are presented as odds ratios (ORs) with 95% CIs. Inter-study heterogeneity was calculated from Cochran's Q test and I2 value. When the heterogeneity was low (I2 < 50%, P > 0.05), the fixed effect model was used, otherwise, the random effect model was used. When the I2 value was inconsistent with the P value, the model used was based on the P value. Differences were considered statistically significant at P < 0.05.

There was a total of 936 patients (506 in the LPF group and 430 in the HAP group) enrolled in the included studies. The characteristics of the final 17 included studies are presented in Table 1. 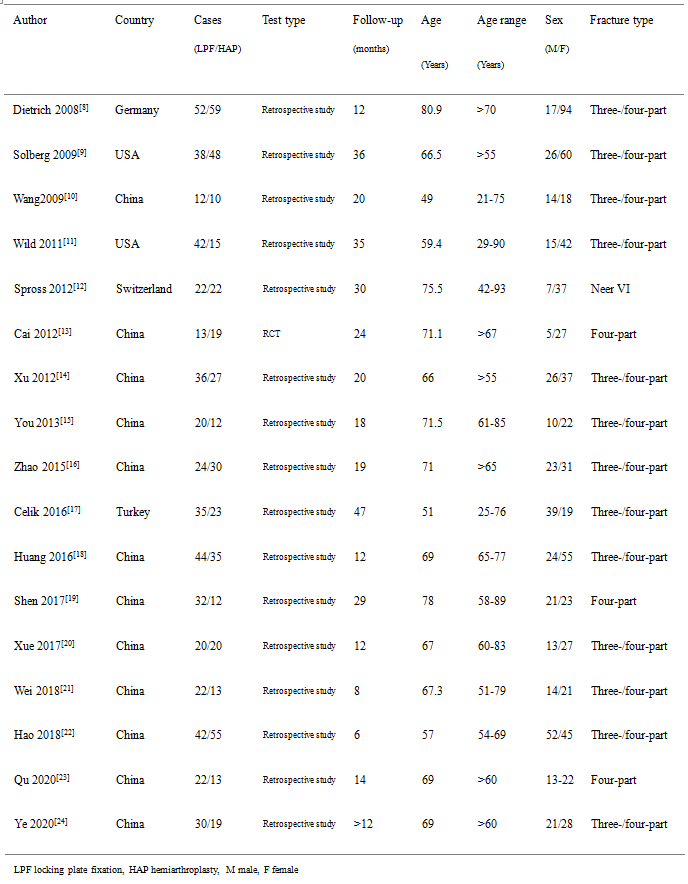 Of the 17 included studies, 16 were retrospective studies and one was a RCT. The methodological quality and risk of bias for each study were evaluated as described in Methods (Fig. 2; Table 2). MINORS scores greater than 12 were included in the study [27], and the quality index scores of the non-RCTs were 13–18 points (13 for one study, 16 for eleven studies, 17 for one study, and 18 for three studies), indicating a moderate risk of bias. A funnel plot for method-related complications (Fig. 3) showed no obvious bias. However, the analysis did include a majority of Chinese studies and so publication bias cannot be excluded.

A: A clearly stated aim; B: inclusion of consecutive patients; C: prospective collection of data; D: endpoints appropriate to the aim of the study; E: unbiased assessment of the study endpoint; F: follow-up period appropriate to the aim of the study; G: loss to follow-up that is < 5%; H: prospective calculation of the study size; I: an adequate control group; J: contemporary groups; K: baseline equivalence of groups; L: adequate statistical analyses. The items were scored as “0” (not reported), “1” (reported but inadequate), or “2” (reported and adequate)

Results of the meta-analysis

The incidence of PHFs is increasing, and is associated with the aging of the World's population [3–4]. The nature of complex PHFs makes them difficult to manage, and it is therefore important to evaluate the postoperative outcomes (efficacy and complications) of the different treatment options for these fractures [30]. The Current surgical methods for the treatment of complex PHFs include pinning, LPF, HAP and reverse shoulder arthroplasty [31]. Pinning is a minimally invasive technique. It can minimize soft tissue damage and aid fracture repair. Pinning, however, is a suitable option only for three- and four-part fractures in patients with good bone quality [32]. Reverse shoulder arthroplasty was first proposed by Grammont et al. [33] and is suitable mainly for patients with rotator cuff joint disease and glenohumeral arthritis, and for comminuted PHFs in the elderly. It is often employed as a rescue measure after the failure of first-line treatment [34]. In this meta-analysis, we compared the two most commonly used surgical techniques for complex PHFs [35], LPF and HAP, in terms of clinical efficacy (Constant–Murley score), method-related complications, and the need for revision surgery.

The main purpose of this surgery is to restore shoulder function as completely as possible. In this regard, this meta-analysis showed LPF to be significantly better than HAP in terms of the overall Constant–Murley score. This result is consistent with a previous meta-analysis by Dai et al. [36], though our analysis included more studies and more clinical data. We also conducted subgroup analyses on the age range of the patients and on fracture types, which showed no significant difference in Constant–Murley scores between the two procedures for patients with four-part fractures or older than 60 years. We propose these observations result mainly from fracture-specific factors (comminution and fracture pattern) and age-related deterioration in bone quality. Despite the fixed-angle screw construct created by locked plating irrespective of bone quality [37], bone loss combined with severe comminution of the fracture may make it difficult to accurately locate some anatomical landmarks and so affect the anatomical reduction. This is consistent with reduced bone quality as an important factor in the prognosis of PHFs [38–40]. Reduced patient compliance because of age and infirmity may also contribute. While based on our analysis it appears that HAP would be the preferred procedure for older subjects with four-part fractures, more data are needed. This includes the comparison of Constant–Murley scores of patients with three-part fractures who are more than 60 years old.

This study has limitations. Only one RCT was included, which itself had limitations and did not have a high level of evidence. The heterogeneity of the efficacy indicator (Constant–Murley score) was relatively large (I2 = 84%). This may be due in part to differences in surgeons' surgical level and in patients' physical conditions or comorbidities, with the bias caused by these factors not being accurately assessed. So while the conclusions of this study are consistent with previous reports, they should be viewed with caution. Further large sample sized studies, ideally RCTs, are needed to resolve some of the outstanding issues and questions.

This meta-analysis indicates that after treatment of complex PHFs, the overall Constant–Murley score was significantly higher with LPF than with HAP, but for patients with four-part fractures or older than 60 years, there were no significant differences in Constant–Murley score between two groups. Rates of postoperative complications and revisions were significantly higher with LPF than with HAP. Hence, we suggest that HAP should be given priority to patients who are more than 60 years old and have four-part PHFs.

We would like to express their gratitude to EditSprings (https://www.editsprings.com/) for the expert linguistic services provided.

Xu-gang Li participated in conception and design of this study. Xu-gang Li and Xiao-yang Qi performed the acquisition of data and the statistical analyses. Xu-gang Li drafted the manuscript. Xu-sheng Qiu revised the manuscript for important intellectual content. All authors read and approved the final manuscript.