Atraumatic splenic rupture is a rare occurrence but an important clinical entity. Although trauma is the most common cause of splenic rupture, there is limited literature on atraumatic splenic rupture (ASR). ASR can be subdivided into true rupture or pathological rupture corresponding to normal versus pathological appearances of the spleen on examination, respectively [1]. The underlying causes of pathological ruptures include neoplastic, infectious, inflammatory, drug/iatrogenic, and mechanical [2]. Neoplasm-associated ASR carries a significant mortality risk, with the majority being secondary to hematological malignancies [2]. However, a small portion of the neoplastic causes include solid tumors that are rarely reported in literature [3]. This report discusses a case of tension hydrothorax and ASR secondary to non-small cell lung carcinoma (NSCLC).

A 59-year-old woman presented to the emergency department with concerns over three days of respiratory distress. One month prior, the patient had presented to the emergency department with seizure activity. At that time, she was diagnosed with stage IV adenosquamous carcinoma of the lung, via fine-needle aspiration of a left lung upper lobe cavitary lesion, with metastases to the liver, right cerebral hemisphere, and right adrenal gland, requiring right hemicraniectomy and intracranial tumor resection. She was discharged with plans to follow up with the thoracic oncology service. Upon current presentation to the emergency department, the patient was afebrile, tachycardic, tachypneic, and normotensive; she was lethargic and in severe respiratory distress with markedly diminished lung sounds over the left hemithorax. Chest X-ray and CT pulmonary angiography revealed a massive left-sided pleural effusion with mediastinal shift (Fig. 1).

A chest tube was inserted that immediately drained 2.5 liters of serosanguinous fluid and another 200 mL over the next 6 hours. During further workup in the ED, a CT scan of the chest, abdomen and pelvis revealed hemoperitoneum and a possible splenic laceration (Fig. 2). Laboratory workup demonstrated leukocytosis of 17,100 cells/mm3, hemoglobin of 7.3 g/dl and a hematocrit of 22.2%. The patient was optimized and taken to the operating room for emergent splenectomy.

An exploratory laparotomy, washout, and splenectomy was performed. Intraoperatively, the patient was noted to have 1 liter of hemoperitoneum and a ruptured spleen, which was removed (Fig. 3). The patient was monitored in the SICU and then transferred to the floors for further management without incident. During the current hospital admission, the patient underwent left video-assisted thoracoscopic surgery for evacuation of a loculated hemothorax, adhesiolysis, and pleural biopsy due to persistent malignant pleural effusion. Pleural fluid cytology revealed poorly differentiated adenosquamous carcinoma of the lung (Table 1). Pleural biopsy and pleural fluid culture grew out Enterococcus faecalis, which was treated with piperacillin-tazobactam.

Due to the advanced nature of her illness, the medical oncology service determined optimal therapy would consist of combination radiotherapy and immunotherapy with pembrolizumab. Her hospital course was complicated by pulmonary embolism and thrombosis of the inferior vena cava. The patient expired three months after her initial presentation.

Despite its rarity, it is important to recognize the risk of ASR in disseminated neoplastic disease due to its potential lethality. According to Orloff and Peksin, the criteria for the diagnosis of spontaneous splenic rupture include the following: (1) no history of trauma or unusual activity that could injure the spleen; (2) no evidence of disease in other organs that are known to affect the spleen and cause it to rupture; (3) no evidence of perisplenic adhesions or scarring of the spleen that suggests previously trauma or rupture; (4) if there are no findings of hemorrhage and rupture, the spleen is normal on both gross inspection and histological examination; (5) normal clotting studies; and (6) no elevations in viral antibody titers in acute or convalescent sera [3].

In the setting of advanced solid tumor malignancy, splenic rupture is most often linked to metastatic extension into the reticuloendothelial system, but limited literature exists to characterize this phenomenon. According to Lam et al., the two most common primary solid tumor lesions associated with spontaneous rupture of the spleen are metastatic choriocarcinoma and metastatic melanoma [4]. Overall, the incidence of ASR in the setting of secondary splenic tumors remains low. Lam et al. reported rupture in approximately 2% of patients in a study of 92 patients with splenic metastasis [4].

Current review of the literature reveals eight reported cases of splenic rupture occurring in the setting of metastatic lung cancer, as in our patient [1, 2, 5]. Ogu et al. and Massarweh et al. both describe cases of ASR secondary to metastatic NSCLC, depicting two different pathological mechanisms [5, 6]. Ogu et al. describes ASR with multiple foci of metastatic disease discovered on splenectomy with en bloc resection of the involved mesentery [5]. Massarweh et al. reports a case of ASR due to a solitary 10-cm metastatic lesion causing a large tear in the splenic capsule [6]. Both of the previously described cases depict gross pathological evidence of metastatic disease in the spleen. However, Kyriacou et al. described a case of ASR as the occult presentation of stage IV NSCLC, where there was no evidence of metastatic disease upon histologic examination of the ruptured spleen, as in our patient. To our knowledge, the current case report is only the second report in the literature describing spontaneous pathologic ASR in the setting of lung malignancy, without evidence of metastatic disease within the spleen itself. The underlying pathophysiology of ASR secondary to lung cancer, in the absence of splenic metastasis, chemotherapy, or G-CSF therapy, remains unclear [1].

The overall ASR-related mortality rate, irrespective of etiology or treatment modality, is 12.2% [2]. 21.4% of this mortality is attributable to neoplastic disorders [2]. Patients with ASR of malignant etiology should undergo immediate total splenectomy, although transcatheter arterial embolization may be used as a temporary stabilizing measure in some cases [2].

In conclusion, ASR secondary to metastatic NSCLC is a rare occurrence; though, failure to detect it may be fatal. Pathologic ASR may be an occult presentation of lung malignancy and in the presence of confirmed NSCLC may portend a poor prognosis. This case’s unique presentation highlights the importance of assessing splenic status in patients with disseminated NSCLC.

Written informed consent was obtained from the patient for publication of this case report and accompanying images. A copy of the written consent is available for review by the Editor-in-Chief of this journal on request

Self-funded by the authors. 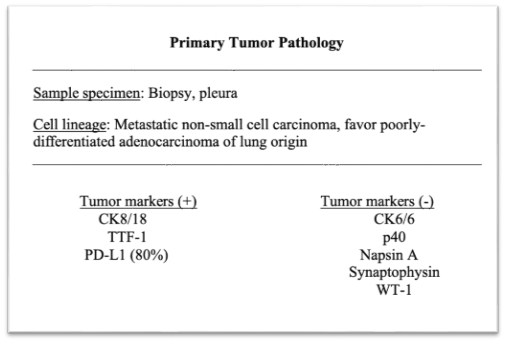