What is the Hierarchy of Evidence?

This form of taxonomy provides an easy visualization of study designs that gives researchers and knowledge consumers a crude method to identify how much confidence should be invested in a study.

Overview of the Hierarchy of Evidence

The hierarchy of evidence is a taxonomy that organizes clinical research based on study designs and assigns a classification level to each design. 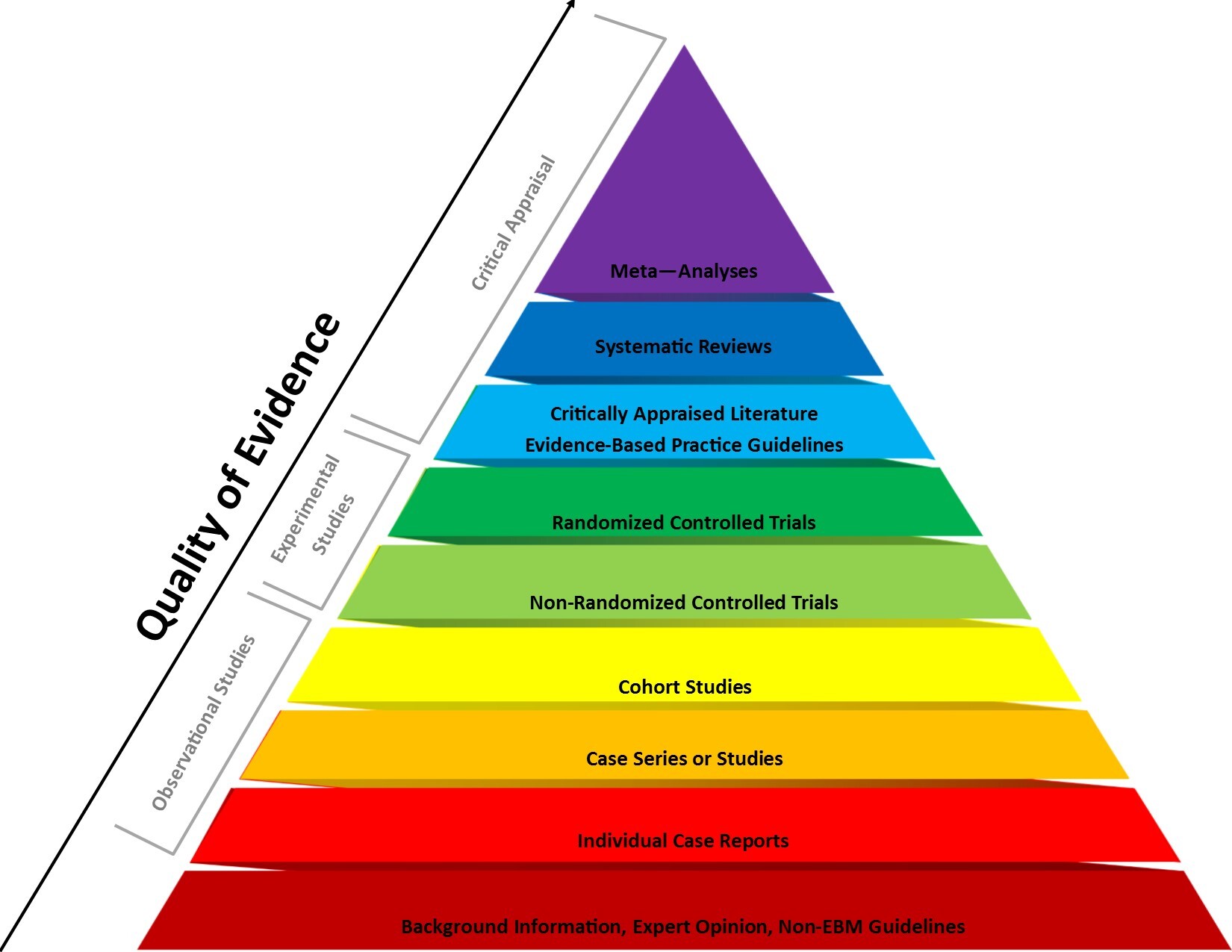 The taxonomy was one of the earliest principles developed by evidence-based medicine (EBM) researchers. The purpose of EBM is to use the current best evidence to make decisions about the care of individual patients.

To use the “best evidence,” the hierarchy was established to guide researchers when evaluating the quality of trials based on the likelihood that the methods used and the results obtained would be less prone to bias and their data more reliable.

Advantages of the Hierarchy of Evidence

The hierarchy provides an easy visualization of study designs that gives researchers and knowledge consumers a crude method to identify how much confidence should be invested in a study based upon the design of the trial in relation to other types of studies in the pyramid.

Caveats of the Hierarchy of Evidence

The hierarchy can be overly simplistic and should not be used to definitively judge the value of a study simply by its design. While systematic reviews and meta-analyses (SR/MAs) are at the top of the hierarchy and represent the highest level of evidence, this does not mean that these studies are always free from methodological issues and bias.

The same concept is applicable to any trial design in the pyramid. Similarly, while expert opinion and case reports represent the lowest level of evidence and are most prone to bias, these forms of research may provide valid insights. However, they will always have limitations, making them the least reliable form of evidence.

Recognizing that the original evidence pyramid may be too simplistic, in an attempt to adjust for potential discrepancies where a study design within the hierarchy achieves a higher level of prominence than one above it, two modifications of the evidence pyramid have been proposed:

The proposed modifications accomplish two objectives, both of which highlight the flexibility of the evidence hierarchy while maintaining its relative structure:

1. The wavy lines indicate that each study design within one level of another may be placed above or below the neighboring level. However, the overall hierarchy is maintained, as case reports should never be considered a higher level of evidence than a cohort trial and a case control study should never be considered higher than a randomized controlled trial (RCT), etc.

2. Since SR/MAs collate all literature around one topic, they should be viewed as the lens through which all additional studies are viewed, retaining the relationship between the wavy lines as described above. For example, the results from a SR/MA evaluating high-quality cohort studies at low risk of bias may be more valid than a SR/MA of low quality RCTs at a high risk of bias.

What to watch for in the Hierarchy of Evidence

The following is a guide that briefly outlines the construction and rational for the hierarchy levels, proceeding from the highest level of evidence to the lowest:

1. SR/MAs are the highest level of evidence. These trials assess the consistency of results and risk of bias between all studies investigating a topic and demonstrate the overall effect of an intervention or exposure amongst these trials.

2. RCTs are the second highest level of evidence. These trials are designed to minimize confounding bias and test causal relationships between groups regarding the effect of an intervention on an outcome.

3. Cohort observational studies are the third highest level of evidence. Both retrospective and cohort studies can be prone to various biases. Prospective cohort studies are considered more reliable and less prone to information bias (selection, misclassification, recall, etc.) and the temporality of the association can be established (the outcome follows the exposure). Confounding bias is possible in both retrospective and prospective cohort trials and is a major problem that can diminish the validity of results from these studies.

4. Case control studies, a type of observational study, are the fourth highest level of evidence. These trials are generally retrospective:the outcome has already occurred, and the researchers are attempting to discover if an association between the outcome and an exposure/risk factor exists. Case control studies are prone to selection bias, information bias, and confounding bias, that collectively make these trials less trustworthy than cohort trials.

5. Case series and case reports are the second lowest level of evidence and are essentially cohort studies that lack a control group. Lack of a comparison group hampers the ability to obtain an association between the variable being investigated and the effects of an intervention/exposure/risk factor and an outcome.

6. Expert opinion is the lowest level of evidence because it is highly prone to bias. Compared to all levels of evidence above, experts are more likely to selectively choose evidence that confirms their prior assumptions or beliefs, may be more prone to conflicts of interest, and may be so selectively focused on one field that they lose sight of the broader picture, which biases their perspective. Expert opinion should be viewed cautiously and not necessarily taken at face value.

Overall, while the evidence hierarchy provides a simple and flexible guide regarding the quality and validity of results, it is laden with many caveats. The takeaway is that the design of a research study is one element that impacts how much trust should be invested in the results of a trial.

Explainer: What is Selective Reporting Bias?

Most Influential Research Square Preprints of All Time