Read the published version in Journal of Clinical and Nursing Research  →

Methods: Female staff aged 40-60 years in 4 tertiary hospitals were randomly selected. The participants’ characteristics and the information of cognition, application and recommendation of MHT were collected by questionnaire.

Results: A total of 341 people participated in this study, the cognition rate of MHT was 37% and the recommendation rate was 44%.For people with indications of MHT, the utilization rate is 15%, and 84.6% of them have used MHT for less than 3 years. 84.6% of those who did not use MHT considered menopause is not a disease and there was no need to use medication. Compared with nurses, doctors know more about MHT ( P <0.01), and MHT recommendation rate of doctors was higher than that of nurses ( P <0.01). The cognition of MHT were analyzed in menopause group, irregular menstruation group and regular menstruation group, there was no difference was found among these three groups (P >0.05).

The life span of human beings have been significantly prolonged, menopausal transition and postmenopausal period have become the longest period in female life cycle[1–2].During this period, ovarian function has declined, a variety of degenerative dieases occurred in the body with estrogen level drops, these changes affect on the health and life quality of middle-aged and elderly women seriously.Proper application of menopausal hormone therapy (MHT) can effectively relieve symptoms related to menopause, and early application of MHT can also prevent the occurrence of chronic diseases in the elderly women[3–4], and improve the quality of life of middle-aged and elderly women.The use of MHT usually advocated by medical staff, whose cognition of MHT directly determines the application of MHT. This investigation aimed to figured out the cognition of MHT among medical institution staff with different professional backgroundand and improve the application of MHT.

The survey was conducted between January to June 2019 in 4 tertiary medical institutions of Dezhou city. Eligible participants were randomly selected, 40–60 years of age, including doctors, nurses, medical technicians and administrative logistics personnel. Written informed consents were obtained from all participants. Exclusion criteria: iatrogenic menopause; women with contraindications to use menopausal hormones.

A questionnaire designed by professional group was used in this study, and the investigators who received specialized training instructed the participant to fill the questionnaire one-to-one and face-to-face. Details of the questionnaire covered age, professional qualifications, educational background, major, height, weight, menstrual status, intrauterine device,chronic diseases, surgical history and family history (gynecological cancer); the awareness and utilization of MHT, the understanding of MHT advantages, such as to relieve vasomotor symptoms[5], prevent osteoporosis[4] and cardiovascular diseases[6–8], and solve problems related to urinary and reproductive tract atrophy[9–11]; whether to use, reasons for using or not; whether recommended to others.

All data were analyzed using SPSS software version 23.0, and the comparisons were performed by chi-squared Test. When P < 0.05, the difference was considered statistically significant.

In our study, 118 women were postmenopausal, accounting for 34.6% of the total number, the average age was 48.63 ± 3.900. 55 women’s periods were irregular, accounting for 16.1%. 168 women have regular menstrual cycles (49.3%). Considered the understanding rate of MHT advantages, such as to relieve vasomotor symptoms, prevent osteoporosis and cardiovascular diseases, and solve problems related to urinary and reproductive tract atrophy, no significant difference was found among menopause group, irregular menstruation group and regular menstruation group (P > 0.05). The 173 women with menopause and irregular menstruation had indications for treatment of MHT, only 26 (15.0%) received MHT, including 11 doctors, 3 nurses, 3 medical technicians and 9 administrative logistics personnel, and MHT utilization was less than 3 years in 84.6 patients (22/26), among these 22 people, 10 patients (45.5%) had remission of symptoms, there was no need to take the drug anymore, for the other 12 patients (54.5%), they feared of adverse reactions, and dare not to use for long time. According to our study, 147 females in medical institutions who had indications didn’t received MHT, most of them (94/147) considered that there is no necessary to accept medication, in their view, menopause was not disease(Table 2). 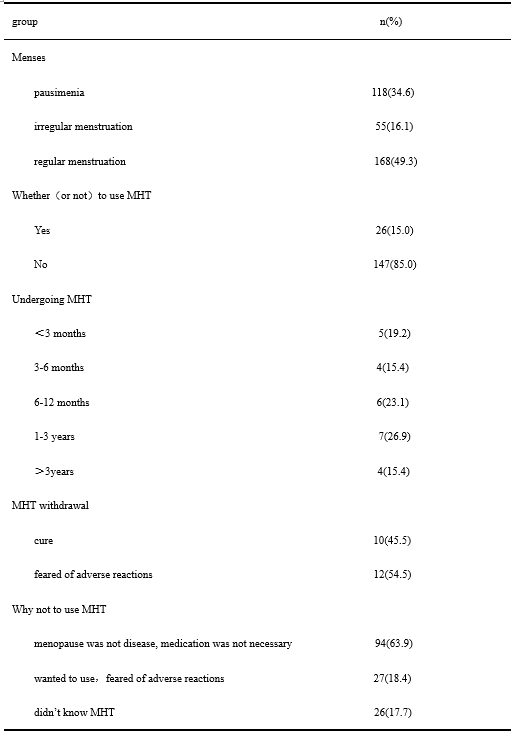 It has been reported that nearly 3/4 of perimenopausal women suffer from hot flashes, night sweats and other symptoms, which can last from moderate to severe for 10 years or more and seriously affect the quality of life [13]. Meanwhile, menopausal symptoms without medical intervention are also associated with high medical expenses and reduced work efficiency [13]. MHT has played roles in various diseases caused by ovarian failure, and contributed to relieve vasomotor symptoms, prevent osteoporosis and cardiovascular disease, improve urogenital tract atrophy. In China, the incidence of menopausal symptoms reached up to 60–70% [14], and only 13.6-29.98% of women knew about MHT [15]. Our survey found that the cognition rate of MHT among medical institution staff was only 37%, MHT could relieve pausimenia symptoms, but only 37.8%-44.3% were awareness of this, which indicating that the understanding and knowledge of menopause in medical institution staff were insufficient. Differences of cognition rate existed in people with different professionals, the cognition rate of doctors on MHT was higher than that of nurses and medical technicians.

The utilization rate of MHT in developed countries has reached 18%-50% [2],A survey among German obstetricians and gynecologists published in 2012 revealed that up to 97% of them would use MHT themselves or give MHT to their partners [16]. A survey in Italy revealed hormone therapy was used by 37% postmenopausal women doctors and 39% male doctors' wives, and 64% postmenopausal women doctors and 58% male doctors' wives were under the hormone therapy[17]. Taking the acceptance and utilization of MHT into account, Chinese women is far from that of advanced countries, such as Europe and the United States. According to the data of Tianjin,the utilization rate of MHT was less than 9.62% [18]. This phenomenon reflected that health care knowledge of Chinese perimenopausal women was exparte, unstandardized, and weak [19]. In our survey, it was also found that the utilization rate of MHT in medical institutions was only 15.0%, and 84.6% of them used MHT for less than 3 years, in their consideration, medication was not required after the symptoms have subsided, and a number of them showed worry about drug side effects. 84.6% of those without MHT believed that the problems related to menopause were not diseases and medication was unnecessary. this conclusion kept consistent with the fact that other studies revealed, that perimenopausal women urgently need to acquire perimenopausal knowledge with a particularly strong demand for health care. The cognition rate of MHT among medical institution staff was 37% and the using rate was only 15.0%, but 44% of them, especially doctors, would like to recommend MHT to others.

In conclusion, the knowledge of MHT in medical institution personnel have been confirmed insufficient and the awareness of health care was very weak. It is urgently required that systematic and standardized training should be conducted for medical institution staff. Administrative staff as a nonmedical background group, had higher utilization rate and recommendation rate of MHT than that of nurses, suggested general population trust the opinions of the professionals, and would like to spread professional points. The training of MHT knowledge in medical institutions should be strengthen, only in this way can we improve the cognition and utilization rate of MHT, promote the application widely.

Ethics approval and consent to participate：

This study was approved by the Ethics Review Board of Maternity & Child Care Center of Dezhou, Shandong (approval number, DFYKY-2018020). All procedures performed in studies involving human participants were in accordance with the ethical standards of the institutional and national research committee and with the 1964 Helsinki declaration and its later amendments or comparable ethical standards.

Written informed consent for publication was obtained from all participants.

The datasets used or analysed during the current study are available from the corresponding author on reasonable request.

The authors have no conficts of interest.

This research received no specific grant from any funding agency in the public, commercial, or not-for-profit sectors.

Read the published version in Journal of Clinical and Nursing Research  →