Chlorofluorocarbons (CFCs)have been broadly utilized in chemical industry due to their superior physical and chemical properties. However, more and more research showed that CFCs is harmful for ozone layer. Molina and Rowland proved that CFCs are a killer of ozone layer that protects humans against harmful ultraviolet radiation from the sun in 1974[1, 2]. Moreover, CFCs as green house gases have a great negative impact on human health and ecological environment. The research of CFCs has recently attracted many experts and scholars all over the world [3]. For example, in 1985, the Vienna Convention was established to restrict the use of CFCs for protecting the ozone layer, facilitated by United Nations Environment Program. With the enhancement of environmental awareness, 46 countries signed the Montreal Protocol (hereinafter referred to as protocol) in Montreal, Canada in 1987. Over time, the United Nation organized several meetings again, strengthen efforts that limited use of CFCs, modified protocol clearly stipulates that developing countries to stop using CFCs, CFCB, CCl4, CH3CCl3.

So far, the technology of harmless treatment of chlorofluorocarbons mainly includes chemical method, incineration, cement kiln, induction plasma, supercritical water and photocatalysis, etc[4-7]. However these methods have some limitations, therefore, it is urgent to pursue safe and efficient method of hydrolysis of CFCs. Solid superacid [8-11]is one of the new catalytic materials that has developed rapidly in recent years. The solid super acid catalytic has advantage of excellent catalytic activity, pollution-free, stability and reusability, thus this type of materials also become very popular in catalytic hydrolysis of CFC-12[12-14]. The catalytic performance of MoO3/ZrO2-TiO2 solid acid catalysts calcined at different temperatures for the hydrolysis of CFC-12 was studied, including the catalyst life. The effects of hydrolysis temperature and steam concentration on the reaction were also investigated[15-17].The conditions of catalytic hydrolysis of CFC-12[18-20] were optimized, which provided a theoretical basis for a large number of harmless treatment of CFC-12.

The MoO3/TiO2-ZrO2 catalyst was prepared by a wetness impregnation. Firstly, 5 ml TiCl4 solution was added into 30 ml absolute ethyl alcohol solution in ice bath conditions. Then 6.2968 g ZrOCl2·8H2O was dissolved in mother solution. Secondly, the pH was adjusted to 8 with 10% ammonia, then took out the solid, washed out the Cl- with deionized water and dried it at 110 ℃. Next, the precursor was impregnated in 0.25 mol/L (NH4)6MoO24·4H2O at 60 ℃ for 6 hours, Finally, the impregnation liquid was filtered, dried at 110 ℃ and calcined at a certain temperature for 3 hours.

In order to understand the morphology of catalyst, this paper has taken the following characterization tools. Firstly, the surface composition of the catalysts is analyzed by X-ray, the instruments are produced in Germany, the model is BRUKER D8ADVANCE. Secondly, the surface morphology of catalysts is analyzed by scanning electron microscopy with spectrum analyzer, the equipment is produced by FEI company of United States, its model is NOVA NANOSEM-450.The crystal structure of the catalyst was analyzed by transmission electron microscope, the equipment was produced by Japan Electronics Company, model JEM2106. BET N2 isotherm adsorption desorption was used to determine the specific surface area and pore distribution of the catalyst, the equipment was produced by Macchik Bayer company, its model is BELSORP-max Ⅱ.

The catalyst hydrolysis test was performed in a fixed bed reactor at one atmospheric pressure. 1.00 g of catalyst (MoO3/TiO2-ZrO2) and 50 g SiO2 were added into quartz tubes (Φ30×700 mm). A mixed gas stream of CFC-12, H2O(g), O2 and He was introduced into the reactor with a total flow rate of 15 ml/min. The catalytic performance of MoO3/ZrO2-TiO2 solid acid catalyst calcined at different temperature for the catalytic hydrolysis of CFC-12 was investigated. The effects of hydrolysis temperature and steam concentration on the reaction were also investigated. After 1.5 hours, the hydrolysis rate of CFC-12 was tested. The catalyst stability was analyzed after 30 hours.

Electric heating sleeve as heating device to produce steam, firstly, clean and dry the glass sand tail gas absorption bottle and weigh it, record as m1.The second of, add a certain amount of water and carry out catalytic hydrolysis reaction, the reaction time was recorded as t. Finally, stop reacting and absorption bottle with water is weighed as m3, calculation of velocity, the formula is as follows 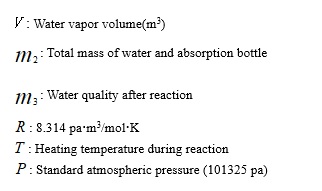 The qualitative and quantitative analysis of hydrolyzate was carried out by gas chromatography and mass spectrometry (Thermo Fisher GC-MS). MS detectors EI source and the electron energy is 70 eV. The hydrolysis rate of CFC-12 and formation rate of CO and CO2 were calculated as follows:

Fig.2 shows the component of the catalyst is mainly amorphous when calcination temperature is below 400℃. As the temperature increasing, the morphology of MoO3/ZrO2-TiO2 crystal appeared. The corresponding characteristic diffraction peaks of tetragonal phase Zr(MoO4)2 occurred with the 2θ of 23.180°,30.526°and 50.033° at calcianation temperature of 500℃. The pattern shows crystal structure of anatase, it confirms the main constituents of the catalyst (MoO3/ZrO2-TiO2) is tetragonal Zr (MoO4)2 phase mixed with TiO2 of anatase.

It can be seen from the TEM diagram of MoO3/TiO2-ZrO2. When the calcination temperature is 400 ℃, the catalyst mainly exists in amorphous state. With the increase of calcination temperature, the catalyst calcined at 500 ℃ mainly exists in crystalline phase. The selected area diffraction pattern in the lower right corner is concentric ring, which shows that the sample is polycrystalline, which is consistent with the XRD results. When the temperature continued to rise to 600 ℃, the specific surface area and catalytic activity of the catalyst decreased, the main reason is the sintering of catalyst.

It can be seen from the figure that the isotherm characteristics of all samples are concave to the relative pressure axis. The adsorption curve is not consistent with the desorption curve, that is, there is a hysteresis loop. The P/P0 values of the catalysts calcined at 400 ℃ and 500 ℃ are 0.45-0.99, which is a typical IV isotherm accompanied by H2 hysteresis loop. The characteristics of these isotherms also reflect the formation of intergranular mesopores. The catalyst calcined at 600 ℃ is characterized by type IV isotherm and H1 hysteresis loop, which is the result of homogeneous pore condensation. When the relative pressure is 0.75 and 0.9, the change slope of the isotherm is higher, which indicates that the mesoporous materials have better uniformity.

NH3-TPD of MoO3/TiO2-ZrO2calcined at different temperatures

Effect of calcination temperature on the hydrolysis rate of CFC-12

It can be seen in Fig.7 that the hydrolysis rate increases with the increase of temperature from 300 ℃ to 500 ℃, and decreases after 500 ℃. The highly hydrolysis rate reaches 98.65 % at 500 ℃. It is studied and analyzed that the occurrence of the catalyst is due to the temperature being too high, the catalyst is sintered, and the activity is lowered.

Effect of calcination time on hydrolysis rate of CFC-12

MoO3/TiO2-ZrO2 SEM diagram of the reaction before and after

The SEM images of MoO3/ZrO2-TiO2 composite before and after the catalytic hydrolysis reaction of CFC-12 were given in Fig.9. The MoO3/ZrO2-TiO2 composite is the shape of lumpy. And has a good crystal structure with calcination temperature of 500 ℃ and calcination time of 3 hours, which is consistent with the XRD results. In addition to the complete crystal form, amorphous particles appear after the reaction, mainly due to the introduction of SiO2, which indicates that MoO3/ZrO2-TiO2 catalyst has high stability and long service life.

Characterization of MoO3/TiO2-ZrO2 EDS after reaction

The EDS diagram showed that no fluorine(F) was detected after the reaction, indicating that fluorine products did not participate in the reaction, and elemental carbon(C) appeared mainly due to the introduction of conductive adhesive in the test. The results show that MoO3/ZrO2-TiO2 catalysth as high selectivity and stability.

The results show that the hydrolysis rate of CFC-12 is more than 98.00%, and the optimum conditions of catalyst dosage, flow rate, water vapor volume fraction and hydrolysis temperature are 1.00 g, 1 mL/min, 83.18% and 400℃, respectively. The main hydrolysis products were CO, CO2, HF and HCl. The main constituents of the catalyst (MoO3/ZrO2-TiO2) is tetragonal Zr (MoO4)2 phase catalyst showing higher activity and selectivity. When the reaction time overtook 30 hours, hydrolysis rate of CFC-12 still remained over 65.00%, showing that the catalyst has high stability. In short, MoO3/TiO2-ZrO2 is a promising catalyst for the catalytic hydrolysis of CFC-12.

This work was funded by the National Natural Science Fund（51568068), Yunnan Minzu University is gratefully acknowledged for providing us with the facilities for the XRD and BET study.at the same time, I would like to thank Tong Zhou, Guoqing Ren, Xiaofang Tan for their help with the expriment and Professor Tiancheng Liu guidance to the experiment.

This work was funded by the National Natural Science Fund（51568068)