Background: Low anterior resection syndrome (LARS) is the most common complication after rectal cancer resection. We aimed to identify predictive factors for LARS and to construct and evaluate a predictive model for LARS.

Methods: This retrospective study included patients with rectal cancer more than one year after laparoscopic or robotic-assisted surgery. A questionnaire was administered to evaluate the degree of LARS. Clinical characteristics were examined with univariate and multivariate logistic regressions to identify predictive factors for major LARS. The obtained data was divided into learning set and validation set. A predictive model for major LARS was constructed using the learning set, and predictive accuracy of the validation set was assessed.

Conclusions: We found that sex, age and tumor location were independent predictors of major LARS in Japanese patients that underwent rectal cancer surgery. Our predictive model for major LARS could aid medical staff in educating and treating patients with rectal cancer before and after surgery.

Colorectal cancer is one of the most prevalent types of cancer in the world.[1] Survival from colorectal cancer has increased over the past 30 years, due to advances in surgery, chemotherapy, and other medicines.[2] The standard treatment for resectable colorectal cancer is radical resection. However, in recent years, a total mesorectal excision and intersphincteric resection (ISR) have become wide-spread for treating rectal cancer.[3, 4] These techniques have reduced the local recurrence rate, but they have negatively impacted anorectal function.[5, 6]

Recently, a European group created a nomogram of a predictive model of LARS occurrence after rectal cancer surgery.[13] The nomogram could be an effective aid for preoperative education and counseling. However, the nomogram was created based on European patients with rectal cancer, and it is unknown if the European nomogram would adapt to Japanese patients with the same condition.

The present study aimed to clarify the risk factors for developing LARS after rectal cancer surgery in Japan, and to develop a model for predicting LARS occurrence in Japanese patients.

We retrospectively reviewed 574 patients that underwent radical rectal cancer resections with lymph node dissections between January 2010 and July 2019 at the Osaka University Hospital. Among these patients, 199 were followed up in our outpatient clinic and completed our LARS survey questionnaire between April 2017 and July 2020. Patients were excluded when they had familial adenomatous polyposis (5 cases), ulcerative colitis (10 cases). Furthermore, patients less than 1 year after surgery (24 cases) were also excluded. We finally included 160 patients in this retrospective study. The obtained data was divided into learning set (n = 115, April 2017 to May 2019) and validation set (n = 45, June 2019 to July 2020) due to the timing of the questionnaire (Fig. 1).

We scored the completed questionnaires and classified the severity of LARS according to a scale described previously.[10] Scores of  0 to 20 indicated no LARS, 21 to 29 indicated minor LARS, and 30 to 38 indicated major LARS  We performed a multiple logistic regression analysis to identify the correlation between major LARS and the preoperative clinical factors.

This study was performed in accordance with the Declaration of Helsinki (1975, and revised in 2008). The study protocol was approved by the Ethics Committee of Osaka University Hospital. All study participants provided written informed consent.

Clinical characteristics of the study population 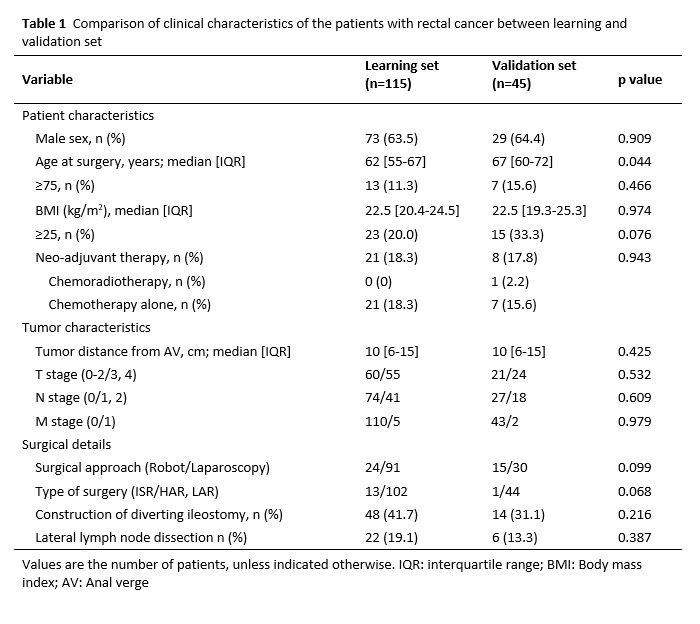 Outcomes of the LARS survey

To identify and construct a nomogram of predictive factors for major LARS, we performed a univariate and multivariate analysis in the learning set. A receiver operating characteristic analysis indicated the cutoff value of 8.5 cm for the tumor distance from the AV (area under curve (AUC):0.77, p <0.01, sensitivity: 0.73, specificity: 0.79; Supplemental Fig.1).We found that  major LARS was signiﬁcantly associated with sex, age, tumor distance from the AV and type of surgery (Table 3). The multivariate analysis included factors with p-values <0.05 in the univariate analysis. We found that male (OR: 2.88, 95%CI: 1.11-8.09, p = 0.03), age <75 years (OR: 5.87, 95%CI: 1.14-47.25, p = 0.03) and tumors located <8.5 cm from the AV (OR: 7.20, 95%CI: 2.86-19.49, p <0.01) were independent predictors of major LARS in Table 4. We then constructed a nomogram of a predictive model for major LARS with the independent predictive variables in Fig. 2. The AUC of the nomogram for major LARS were 0.80 in the learning set and the calibration was sound. When the nomogram was applied to the validation set, the AUC was 0.76 and the calibration was also valid.

Rectal cancer surgery is frequently associated with complications.[15-17] Defecation disorders are among the most frequent complications after rectal cancer surgery. The Japanse treatment guidelines recommend total mesorectal excision for patients with rectal cancer.[18] In addition, we are also actively working on lateral lymph node dissection and ISR to prevent local recurrences. These surgical treatments cause bowel dysfunction due to damage of the anal sphincter muscle and a reduction in rectal volume.[19-21] On the other hand, preoperative radiation therapy is recommended for patients with advanced rectal cancer in Western countries, and it has been reported that the radiation therapy also leads to defecation disorders.[13, 22] The incidence of major LARS after rectal cancer surgery has been reported to be more than 40% [22-24], and the incidence of major LARS was similar in this study.

Defecation disorders impose limits on daily life activities and mental stress.[25, 26] It is considered necessary to treat or prevent defectation disorders after rectal cancer surgery. One study reported that sacral nerve stimulation therapy could effectively alleviate defection disorders.[27] However, there has been no evidence of an effective treatment for LARS. Recently, it has been reported that a nomogram may be effective in preventing complications.[28, 29] In addition, the nomogram may be beneficial for counseling patients. Therefore, we expect that our nomogram can play an important role for LARS therapy.

We found that age also strongly affected the development of major LARS in our nomogram. Older individuals have a weak anal sphincter muscle, which prevents control of gas or stool passage.[30] Therefore, fecal incontinence after rectal cancer surgery might be expected to occur more frequently in older patients. However, interestingly, we found that younger patients tended to have higher LARS scores in this study, consistent with findings in the previous European study.[13] When compared by age, there was no apparent difference in clinical characteristics, as shown in Supplemental table 1. On the other hand, comparing the results of the LARS survey, younger patients had higher scores than older patients in the question about the sense of urgency in defecation (Q5), although they showed little or no differences in the scores for questions 1-3, as shown in Supplemental table 2. This result suggested that younger patients felt more fecal urgency than older patients, despite the fact that rectal cancer surgery can cause stool and fecal incontinence, regardless of age.

Gender was also a correlating factor as well as the other report.[13] In the present study, men were more likely to develop major LARS. However, men generally have a narrower pelvic floor than women, which makes it more difficult to manipulate and puts more external stress on the surrounding tissues, including the pelvic floor muscles, which may have led to defecation problems. On the other hand, the European nomogram suggests that women are more likely to develop major LARS and to have defecation disorders due to damage to the pelvic floor muscles caused by childbirth. Thus, the nomogram has a problem that the results may differ depending on the background of the subject, and the application of the nomogram needs to be carefully examined. In fact, the AUC of the European nomogram was 0.60 in the present study of 160 patients, and our nomogram showed higher accuracy.

We identiﬁed three independent predictors of major LARS for Japanese patients that undergo rectal cancer surgery: sex, the age at surgery, the location of the tumor. We also constructed and validated a nomogram to predict major LARS from the above results. In the future, we will examine the applicability of the model developed in this study to other institutions and the impact of this model on rectal cancer treatment.

Ethics approval  The study protocol was approved by the Ethics Committee of Osaka University Hospital.

Consent to participate  All study participants provided written informed consent.The authors declare that they have no conflict of interest.

Availability of data and materials  The datasets used and/or analysed during the current study available from the corresponding author on reasonable request.

Competing interest  The authors declare that they have no conflict of interest.

Conception and design of the study: Paku, Miyoshi, Fujino

Final approval of the article: Eguchi