Background: Airway management in patients with out of hospital cardiac arrest (OHCA) is important and several methods are used. The establishment of a supraglottic airway device (SAD) is a common technique used during OHCA. Two types of SAD are routinely used in Norway; the Kings LTS-D™ and the I-gel®. The aim of this study was to compare the clinical performance of these two devices in terms of difficulty and number of attempts before successful insertion.

Methods: All adult patients with OHCA, in whom ambulance personnel used a SAD over a one-year period in the ambulance services of Central Norway, were included. After the event, a questionnaire was completed and the personnel responsible for the airway management were interviewed. Primary outcomes were number of attempts until successful placement of SAD and graded difficulty of insertion. Secondary outcomes were specified challenges with the SAD at insertion. Intergroup differences were compared using Chi-square test for multiple groups.

Establishment of a patent airway in order to perform ventilations and chest compressions in addition to early defibrillation are important interventions during the resuscitation of a patient with out-of-hospital cardiac (OHCA) [1]. To establish a patent airway, health care providers commonly use bag-valve-mask ventilation (BVM), or an advanced airway such as supraglottic airway device (SAD) or endotracheal intubation (ETI). Animal studies have shown that a combination of ventilation and chest compressions is more effective than compressions only to preserve oxygenation and to limit hypercapnia [2, 3]. Even though the time spent on ventilation during BVM is not necessarily long, the total hands-off time is significantly longer than the time required for each ventilation [4]. While BVM requires interruptions in compression to perform ventilation, SAD/ETI allows continuous compressions combined with ventilations between compressions. Another advantage is that a fixed airway gives the manual availability for other practical tasks, and no-flow time is reduced when an advanced airway is established [5].

An advantage of the SAD is that it can be inserted without visual inspection, and that it provides a relative air seal tightness around the larynx, which reduces the passing of air into the stomach. Even though some studies show higher survival with the use of ETI compared to SAD [6], SAD is performed quicker and with a higher success rate than ETI when used out of hospital and by less experienced personnel [7-9]. SAD is associated with a lower hands-off time than ETI [10].  European guidelines regarding CPR by ambulance personnel recommends the use of SAD rather than ETI during out of hospital cardiac arrest (OHCA) [1].

Neither the Norwegian nor the European Resuscitation Councils have specific recommendations on the selection of type of SAD, which may explain the use of several different devices among local health trusts [11]. In the three local health trusts in Central Norway two different types are used, the I-gel® (Intersurgical, Wokingham, UK) and the King LTS-D ™ (North American Rescue, Greer, SC, US). LTS-D is a laryngeal tube, consisting of a tube with a distal oesophagus cuff and a proximal pharyngeal cuff, which are inflated after insertion in oesophagus. I-gel is an anatomical shaped laryngeal mask, covering all of glottis when placed.

The aim of the study was to investigate the number of attempts before successful insertion and assessment of challenges of insertion in I-gel and LTS-D, when being used by ambulance personnel during out-of-hospital cardiac arrest in Central Norway.

The Central Norway Regional Health Authority has the overall responsibility for the three ambulance services within the health trusts of Møre- og Romsdal (HMR), Nord-Trøndelag (HNT) and St. Olav’s hospital (SOH), covering a total patient population of approximately 721.000 persons. The three ambulance services are separate administrative units, but the Joint Commission of Ambulance Services in Central Norway provide the same guidelines and protocols, and the training and certification of personnel within the three services. The only difference in protocols during this study was the type of SAD used during OHCA. In HMR and SOH the I-gel was used, whereas in HNT the LTS-D was used.

All cardiovascular and / or respiratory arrests in adult patients where ambulance personnel attempted insertion of a SAD during the 12-month period from March 2016 to February 2017 were included. These patients were registered according to the Utstein template of uniform reporting for OHCA [13]. The inclusion process is shown in Figure 1. Ambulance staff recorded patient data electronically in the electronic patient chart (Ambustat®). Additional study variables were added to further describe characteristics of the performed airway management (Additional file 1). To validate recorded data, every ambulance personnel responsible for airway management was interviewed after every case. This was done to ensure that the form was interpreted and filed correctly.

The included OHCA were divided into groups according to which SAD was used. A successful insertion of a SAD was defined as properly positioned and working, as clinically assessed by the ambulance personnel on site. Assessment of proper function was verified by visual confirmation of chest movements, auscultation and/or by the use of capnography. The level of insertion difficulty (easy, medium or hard) were based on the individual perception of the ambulance worker.

Data was analysed in SPSS, and primary endpoints were assessed with Chi-square test for two or more categories (without test for trend). The tests were two-sided, and significance was set at p <0.05. Data were reported as median +/- interquartile range.

Five-hundred-and-twenty-eight patients with OHCA were treated by the ambulance services, of which two-hundred-and-fifty were included in the study. Baseline patient and event characteristics are presented in Table 1. The total number of excluded patients was 278, in which the main reason for exclusion was no resuscitation efforts started, or airway administration performed by someone other than ambulance personnel (Figure 1). Seven out of 392 interviews were excluded due to unavailability of adequate information from the ambulance personnel involved. The degree of procedural success and reported difficulty of insertion is demonstrated in Table 2. 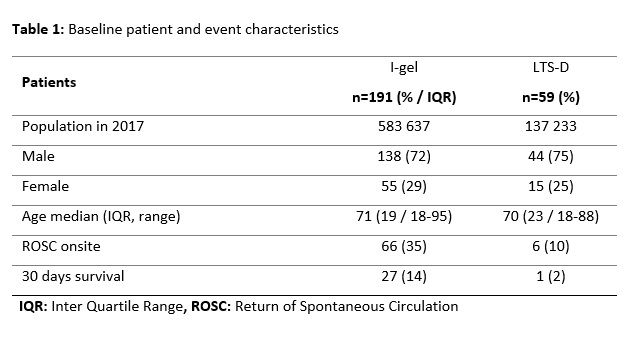 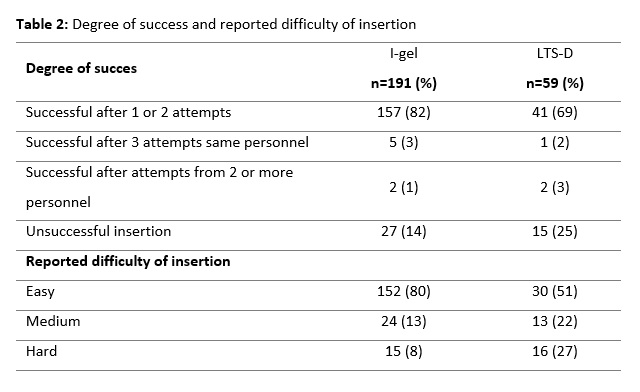 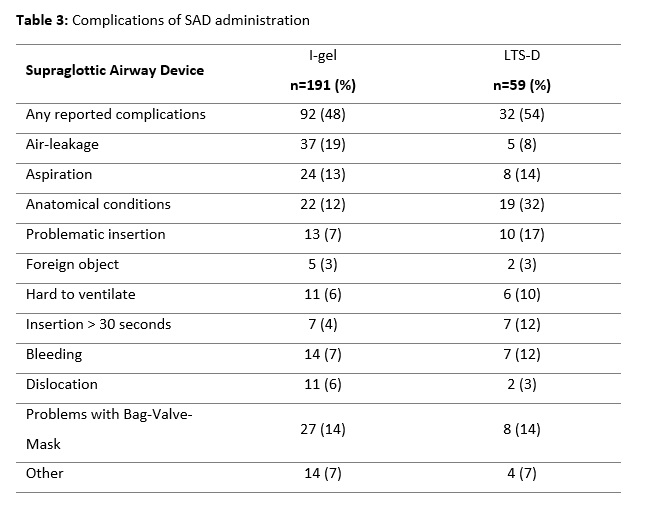 Endotracheal intubation is the gold standard in prehospital advanced airway management, but requires a level of experience and training often not achievable for ambulance personnel [14]. Several studies show that, at least in hands of less experienced personnel, SAD has a higher insertion success rate and reduced time to secured airway compared to ETI [9, 15, 16]. Skill retention is also high for SAD, showing that less continuous training is needed to adequately use the SAD [15, 17]. When the patient is suboptimal positioned, SAD has an increased success rate compared to ETI, even when being used by skilled anaesthesiologists [18]. During a randomized controlled trial comparing SAD or ETI, fewer of the patients in the ETI group received any advanced airway interventions, which might be associated with SAD being easier to use. In the same study, they noted that among the patients receiving advanced airway management, the patients who received SAD had a higher survival compared to ETI – independent of which group they initially were allocated to [19]. A meta-analysis showed better survival and neurological outcome by the use of ETI compared to SAD, but this included no randomized controlled trials, and did not specify if the personnel using ETI and SAD had the same experience level [6].

In studies comparing I-gel and LTS-D during elective surgery, on cadavers or on manikins most studies are in favour of I-gel when it comes to successful insertions and time to airway control [20-26]. This is consistent with our study results, but it’s important to note that during elective surgery, treatment occurs in a more controlled environment than in the prehospital setting; with more knowledge of the patient in advance, optimal positioning of the patient, optimally anesthetized patient, optimal working height, good lighting, and sufficient personnel present and necessary equipment available. The prehospital setting is often characterized by austere conditions and an unpredictable treatment situation; the lighting conditions may be poor, the space conditions and positioning may be challenging, the patient is unknown, and the personnel resources are limited. The importance of an easy-to-use airway management tool is essential, as it is necessary to share the attention between airway management and other work tasks. We have not found any studies comparing the two SADs in out-of-hospital cardiac arrests.

We recognize some limitations in our study. First, the type of airway device used depended on which ambulance service the ambulance personnel belonged to, thus there was two groups with I-gel and one with LTS-D. Second, the three separate services had the same certification requirements and monthly case training on cardiac arrest situations and airway administration, but one would expect that educational motivation and updating would differ a little between ambulance bases in the same service. Third, the level of competence and experience of the ambulance personnel being responsible for each airway administration was not recorded in this study. All personnel have completed training in supraglottic airway administration, but personal education and experience may differ based on years in service and the local incidence of OHCA. This was not further investigated, which cannot exclude the possibility of results being affected by differences in overall competence in the three ambulance services. Fourth, the population density differs within the three health trusts. In services close to the cities, in Trondheim in particular, the population density is significantly larger than in the rural areas. This may affect the experience, and thus the competence of the individual ambulance personnel. Differences in geography may also affect ambulance response times, which may affect the probability of survival after cardiac arrest. Extended use of time before the initiation of resuscitation reduces the likelihood of survival [27]. However, we assumed that this would not affect the primary endpoints.

Despite some limitations, the data in this study reflect real-life situations and how the two different devices perform in pre-hospital clinical services. There are several environmental differences affecting practice when comparing the pre- and in-hospital setting. Results from previous studies performed in the in-hospital setting (i.e. operating room) might therefore not be directly transferrable to the pre-hospital setting. By conducting a telephone interview of all involved ambulance workers, the quality data could be validated. As an example, several ambulance personnel did initially not register the use of SAD as an airway intervention if they did not achieve a successful insertion. Without a telephone interview, the number of missed interventions would potentially have been substantially higher.

The study showed a difference between the use of LTS-D and I-gel during OHCA in the clinical setting of the ambulance service in Central Norway. Overall success rate was significantly higher and the difficulty in insertion was significantly lower in the I-gel group compared to the LTS-D group. The use of I-gel during OHCA is associated with both being easier and more often successfully inserted when compared with LTS-D.

STROBE          Strengthening the reporting of observational studies in epidemiology

The datasets used during the current study are available from the corresponding author on reasonable request.

The authors declare that they have no competing interests or disclosures.

The authors received no external funding.

We would like to thank Inger Ingeborg Riphagen from the Unit for Applied Clinical Research at the Norwegian University of Science and Technology for her assistance in an extended literature search relating to the topics of the use of SAD in cardiac arrest.