Read the published version in Journal of Orthopaedic Surgery and Research  →

Background: Lumbar interbody fusion is a standard technique for treating degenerative lumbar disorders involving instability. Due to its invasiveness, a minimally invasive technique, extraforaminal lumbar interbody fusion (ELIF), was introduced. On surgically approaching posterolaterally, the posterior muscles and spinal canal are barely invaded. Despite its theoretical advantage, ELIF is technically demanding and has not been popularised. Therefore, we developed a microendoscopy-assisted ELIF (mELIF) technique which was designed to be safe and less invasive. Here, we aimed to report on the surgical technique and clinical results.

Methods: Using a posterolateral approach similar to that of lateral disc herniation surgery, a tubular retractor, 16 or 18 mm in diameter, was placed at the lateral aspect of the facet joint. The facet joint was partially excised, and the disc space was cleaned. A cage and local bone graft were inserted into the disc space. All disc-related procedures were performed under microendoscopy. The spinal canal was not invaded. Bilateral percutaneous screw-rod constructs were inserted and fixed.

Results: Fifty-five patients underwent the procedure. The Oswestry Disability Index and visual analogue scale scores greatly improved. Over 90% of the patients obtained excellent or good results based on Macnab’s criteria. There were neither major adverse clinical effects nor the need for additional surgery.

Conclusions: mELIF is minimally invasive because the spinal canal and posterior muscles are barely invaded. It produces good clinical results with fewer complications. This technique can be applied in most single-level spondylodesis cases, including those involving L5/S1 disorders.

Posterior interbody fusion is a standard technique for treating degenerative lumbar disorders. Posterior lumbar interbody fusion (PLIF) was developed first,1 followed by transforaminal interbody fusion (TLIF).2 These techniques have produced stable outcomes but are relatively invasive because both the posterior muscles and spinal canal are surgically invaded. Therefore, a minimally invasive technique, extraforaminal lumbar interbody fusion (ELIF), was introduced.3 In this technique, the approach is from the posterolateral direction, and the disc is manipulated through Kambin’s safety triangle.4 This damages the posterior muscles to a small extent, and it does not involve the surgical invasion of the spinal canal. However, despite its theoretical superiority, ELIF has not been popularised because it is technically difficult to perform.

Thus, we developed a unique single-level microendoscopy-assisted ELIF technique (mELIF). In this technique, the approach is more lateral than that of TLIF (Fig. 1A, B). In most of the procedure can be performed with a tubular retractor (TR) under endoscopic visual assistance. We considered that this technique could yield good results and reduce approach-related complications. Therefore, in this report, we aimed to describe the surgical technique and its clinical results.

A total of 55 patients (17 men and 38 women; mean age, 62.7 years; range, 43–79 years) underwent the mELIF procedure between 2015 and 2020. The index diagnoses were degenerative spondylolisthesis (n = 33), isthmic spondylolisthesis (n = 9), foraminal stenosis (n = 10), and others. Thirty-three patients had Meyerding grade II spondylolisthesis, and nine had grade I. Seven patients had previous canal decompression surgery. Thirty-six patients underwent surgery at L4/5. The remainder underwent surgery at L5/S1 (n = 16) and L3/4 (n = 3). To evaluate the levels of lumbar and radicular pain, changes in pain density were recorded using a visual analogue scale (VAS) with scores ranging from 0 to 10 (0: no pain and 10: the most severe pain). Physical spinal function was evaluated using the Oswestry Disability Index (ODI). The final outcome was evaluated using Macnab’s criteria. All the patients, apart from two who were lost to follow-up, were followed up for at least half a year. Demographic data are shown in Table 1. The surgical procedure is described below. 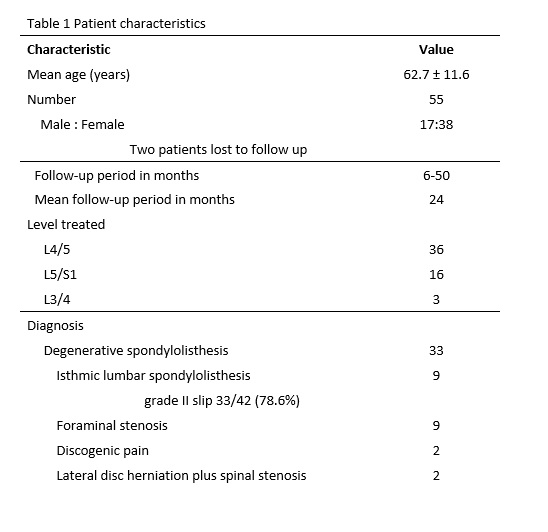 mELIF at L4/5 with right-sided approach is described. Surgery was performed under general anaesthesia with the patient in the prone position. At approximately 5 cm from the midline, bilateral longitudinal skin incisions that were approximately 4 cm in length were made. Under fluoroscopic guidance, four guide wires were inserted bilaterally into the L4 and L5 pedicles for percutaneous pedicle screw placement. In the middle of the right-sided skin incision, approximately 2 cm of the fascia was cut. A TR with a diameter of 16 mm was docked on the lateral edge of the facet joint after sequential dilation (Fig. 2A). A microendoscope (Medtronic Sofamor Danek, Memphis, TN, USA) was then installed. Under the guidance of microendoscopic illumination and vision, the lateral aspect of the right L4/5 facet joint was excised with a chisel and preserved as graft bone. A high-speed burr was used for the final meticulous bone resection. The intertransverse process ligament was removed, and the right L4 exiting nerve root and disc were identified (Fig. 2B). The root was protected, and a rotational expander followed by a ring curette were inserted into the disc. The disc space was subsequently cleaned (Fig. 2C).

Under fluoroscopic guidance, a mixture of bone graft and β-tricalcium phosphate was inserted into the disc space through the TR, followed by the insertion of a bullet-type cage (Fig. 3). After saline irrigation, the TR was removed. Bilateral pedicle screws and rod constructs were placed. A suction drain was placed only on the right side of the wound, and the wounds were closed. 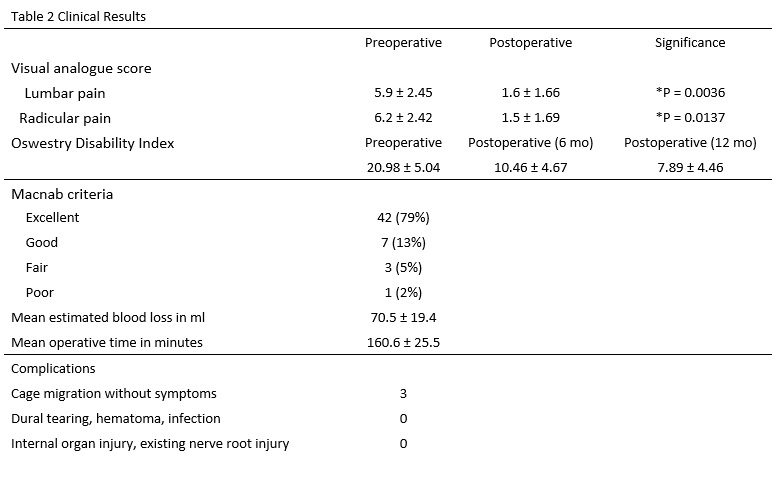 A 61-year-old woman presented at our hospital with a complaint of lower back pain and bilateral sciatica, which had lasted for 2 years. Imaging studies revealed grade II degenerative spondylolisthesis and severe spinal stenosis at L4/5 (Fig. 4A, B). The VAS scores were 7.0 for lumbar pain and 8.0 for radicular pain. The ODI was 40%.

The operative time was 206 min, and the amount of blood loss was 50 ml. The patient’s symptoms were greatly alleviated after surgery. During the final follow-up conducted 2 years after surgery, the VAS scores were 1.1 for lumbar pain and 0 for radicular pain. The ODI improved to 6% at 2 months and to 4% at 2 years post-surgery. The result was excellent based on Macnab’s criteria. One year after surgery, radiography demonstrated that a good correction of spondylolisthesis was maintained (Fig. 5A). Magnetic resonance imaging revealed that the spinal canal was decompressed without direct decompression (Fig. 5B), and computed tomography also revealed bone fused around the cage (Fig. 5C).

ELIF, a less invasive interbody fusion technique, was introduced by Phillips and Cunnigham3 based on Wiltse’s approach9 in 2002. The approach in ELIF is from the posterolateral direction which is more lateral compared to those in PLIF or TLIF (Fig. 1A). Interbody fusion is performed through Kambin’s safety triangle4 without the need for surgically invading the spinal canal.

In theory, ELIF has many advantages: minimal invasiveness, no canal invasion, and easy revision surgery after the previous decompression of the canal. However, ELIF has not been popular. In our opinion, the reason for this is that ELIF is considered technically demanding because the surgical field is deep, and the illumination is poor. In addition, surgeons were concerned about damaging the dorsal root ganglion of the exiting nerve root. Therefore, Baek et al.10 recommended a wide dissection and meticulous manoeuvre in ELIF.

Based on the same concept that does not involve the surgical invasion of the spinal canal, lumbar lateral interbody fusion (LLIF) was introduced.11-14 LLIF employs a lateral approach, and neither the spinal canal nor the posterior lumbar muscles are surgically invaded. This technique demonstrates that “indirect neural decompression without direct decompression of the spinal canal” can result in good clinical recovery. LLIF procedures, including oblique lateral interbody fusion (OLIF)11,12 and extreme lateral interbody fusion (XLIF),13,14 have become increasingly popular. LLIF has been demonstrated to produce good results in a minimally invasive manner, but the rates of approach-related adverse effects, some of which are very severe, have been reported to be relatively high.15-17 In XLIF which involves a lateral retroperitoneal transpsoas approach, lumbar plexopathy, bowel injuries, ureteral injuries, and vascular injuries have been reported.15,16 OLIF involves the use of a peritoneal approach, and complications, such as lumbar plexopathy, peritoneal lacerations, and ureteral injuries, have been reported.16,17

mELIF is a unique lumbar interbody fusion technique that entails the use of the ELIF approach under spinal microendoscopy. The skin incision is made 6 to 10 cm from the midline in ELIF10,18 and 4 to 6 cm from the midline in mELIF. As stated by Baek et al.,10 a wide dissection is needed in ELIF, and in contrast, minimal invasiveness can be maintained in mELIF by using a 16 or 18mm TR. In mELIF, the approach angle is approximately 45-degrees from the posterolateral direction, which is away from the internal organs and psoas muscles. The procedure is performed under bright and clear microendoscopic vision. Therefore, we believe that mELIF is a safe surgical technique.

Another endoscopic ELIF technique performed through Kambin’s safety triangle was also reported.24,25 In this technique, the approaches are relatively distant from the midline and are close to those involved in the original ELIF procedure. They used full endoscopy (FES) of which diameter is around 8mm. The advantage of mELIF is that manipulations such as removing bone, securing nerve root and inserting a cage into the disc are clearly seen in 16mm TR. These procedures are difficult to see directly in fusion surgeries using FES. Therefore we believe that mELIF can be performed in a safer manner. Another benefit of mELIF is that bone resection is easier. Therefore complicated cases such as with L5/S1 disorder or with grade II spondylolisthesis can be good candidates for mELIF.

We performed a single-level mELIF procedure in 55 patients, and the results were very favourable. The results in over 90% of the cases were excellent or good. We are certain that indirect decompression is also valid in mELIF as well as in other LLIF techniques. There were neither major clinical complications nor the need to perform revision surgical procedures in this study. Three patients developed asymptomatic cage migration in the disc space. Bone union was obtained in 90% of the cases at 2 years postoperatively. The rate was comparable to that of TLIF studies.5-8 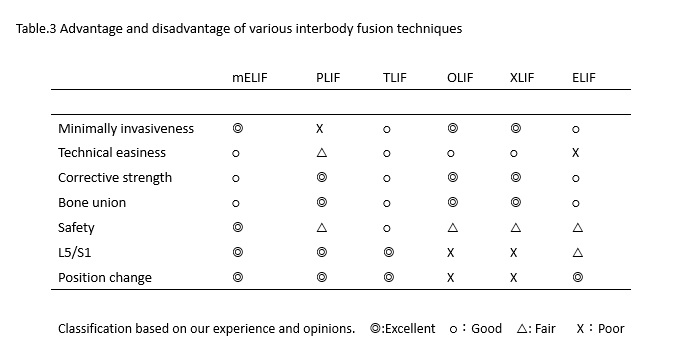 There were several shortcomings associated with mELIF in this study. This procedure was only applied to treat single-level disorders. Multiple-level mELIF can be performed, but we do not have the experience yet. The operative time was also slightly prolonged, but after our initial experience, we are certain that this can be shortened. We used a single bullet-type cage in most of the cases, and the correction was not as strong as that achieved in the XLIF and OLIF procedures, in which a bigger cage is used. However, recently, we managed to insert two cages in several cases (Fig. 6A, B). In this study, bone union was achieved in 78% of the cases at one-year post-surgery and in 90% at 2 years. This number is comparable to that of TLIF studies5-8.

In addition, there are other limitations in this investigation. There was no control group in this study. The number of cases was relatively low. The follow-up period was relatively short. Further follow-up is necessary to assess long-term outcomes. However, our preliminary results appear promising. In conclusion, mELIF is safe and produces stable results in a minimally invasive manner and therefore, can be used as an alternative to other more invasive lumbar interbody fusion techniques for the treatment of patients with single-level spondylodesis, including those with L5/S1 disorders.

The authors have no financial or any other kind of personal interest in any of the materials, or devices mentioned in this article.

We would like to thank Editage (www.editage.com) for English language editing and thank Ms. Huiwen Li revising the article.

Informed consent for publication availability of data and materials was obtained from all participants.

This study protocol was approved by the Aichi Spine Hospital Institutional Review Board (IRB FILE No: 2014-12-20180000) and adhered to the guidelines of the Declaration of Helsinki. All participants provided written informed consent.

Patients signed the consent form to publish their data and photographs.

The authors declare no competing interests.

Read the published version in Journal of Orthopaedic Surgery and Research  →