Based on the influence of multiple factors such as natural environment, socio-economic and cultural customs, the spatial forms of settlements have regional heterogeneity that is obviously different from that of cities[10]. The research framework of the development law of rural settlements based on external factors such as nature, economy, society and culture has been widely used in the study of settlement space. For example, Singh et al.[11] analyzed the influencing factors of land use in the Galval region of rural India from three aspects: ecological, socio-economic and policy influences. Liu Sheng et al.[12] explained that natural and human activities are important driving forces that cause the spatial differences in the hollowing out of traditional settlements in Lishui. Beatrizand García-Gómez[13] argued that population is the main reason for the fluctuation of spatial vitality in traditional cultural regions. Furthermore, some scholars have found that the human-land relationship plays an important driving role in the evolution of the spatial patterns of traditional settlements [1]. The studies mentioned above showed that the settlement space is driven by multiple aspects. But rural settlements have a law with strong bottom-up and self-organization model, and spatial change is a dynamic process of multiple driving forces affecting multiple dimensions such as material space, economic development and social function [14]. The exploration of settlement space should not only start from external factors, but also focus on the search for the composition of the village form space itself [15]. However, only refer external indicators as a way to discuss the development law of traditional settlement space is easy to ignore the driving force of the spatial organization structure law on the evolution and adaptation mechanism of the space system, which has certain limitations. Therefore, it is necessary to study the role of rural settlement spatial networks and spatial forms on the spatial diversity laws of traditional settlements.

This study refers to Qianzhong area is Anshun city of Guizhou province in Southwest China (105°13′~106°34′E, 25°21′~26°38′N) (Figure 1), with a total area of 9267km2, which is a typical karst landform concentration area and occupies an important military position along the line of Guizhou and Yunnan. According to statistics, there are 229 Tunpu in the Qianzhong area, accounting for 35.5% of the province's Tunpu [27]. According to the list of traditional Chinese villages, a total of 67 villages in Anshun have been selected into the list of traditional villages, of which 33 are Tunpu settlements, accounting for 49.3% of the total number of traditional villages in Anshun.

In this study, through obtaining the textual data of traditional villages of the Department of Housing and Urban-Rural Development of Guizhou Province so as to determine the scale range of this study and extract the influencing factors index of settlements. Taking the 2019 Pleiades high-resolution satellite image map (0.5m spatial resolution) of the research object as the source of image data, referring to the settlement topographic map to drawn up the existing spatial layout map of the Tunpu settlement, and extract the two-dimensional data variables such as the spatial networks and spatial morphologies of the settlement. On the basis of field research, the quantitative statistics of spatial types are carried out.

Using typological methods, the Tunpu settlement space is divided from the perspective of functional properties, thereby defining space matter, that is, it refers to the plot space that has a certain functional positioning and is not easily separated by external interference (the two-dimensional land plane). A collection of multiple plot space with a certain function constitutes a spatial population [21]. This study is focused on the dense areas of the elements constituting the settlement (neglecting large areas of woodland, rivers and other plots), and based on the functional attributes of each plot space, it can divide into 13 types of space. They are: residential architectural space, street space, courtyard space, Tunpu gate space, Tunpu walls space, watchtower space, temple space, opera house space, ancestral temple space, educational space, square space, ancient well space, commercial space. In order to reveal the spatial diversity changes of the Tunpu settlement in the later period expansion, this study refers to the text of the traditional village planning and design scope of the study area and sets the scale of the scope of this study: That is to say, the core protected area with relatively well-preserved cultural landscape characteristics of the settlement and the planning coordination area of the later artificial expansion are the scale range(Taking Tianlong Tunpu as an example, Figure 2). According to the formation characteristics of Tunpu settlement, the classification of Tunpu settlement type is the basis for the gradient of diversity differences in β.

Calculation and meaning of spatial diversity index of Tunpu settlement 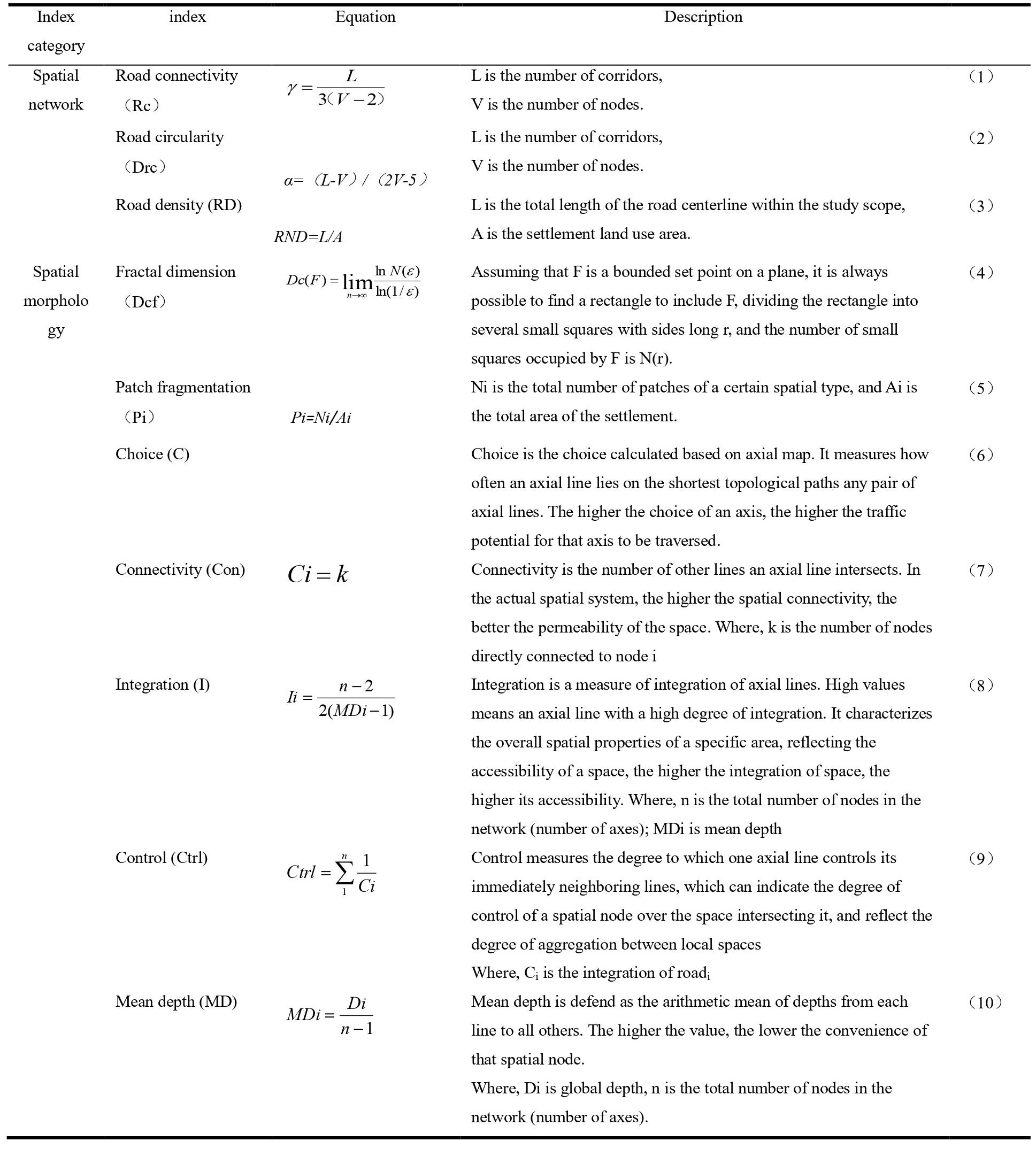 Excel2020 and SPSS19.0 software were used to perform statistical analysis on the data, the spearman correlation analysis of bivariate correlation was used to compare the correlation between spatial diversity and spatial characteristics and influencing factors of Tunpu settlement; stepwise linear regression is used to analyze the contribution rate of influencing factors; adopted mean Euclidean distance to classify spatial patterns; and utilized Origin 2021 software for mapping.

It can be seen from figure 3 that the overall level of military Tunpu and commercial Tunpu shows the characteristics of a space network with strong connections, and the spatial network connection of residential Tunpu is relatively weak, but there are different amplitudes of changes in the spatial network indicators of Tunpu settlements under artificial expansion. Among the spatial network indicators in the core area, Vil2 has the strongest spatial connection, and in the coordinated control area, Vil2 has the highest performance in road density and Vil8 has the highest performance in road connectivity and road circularity; On the whole, the expansion of the regional spatial network of residential Tunpu is characterized by a strengthening or slight decrease in ties, and most of the spatial relevance of military Tunpu and commercial Tunpu is weakened to a certain extent, while the slight increase in Vil8 may be related to the strengthening of external links with its original closed geographical conditions in the process of urbanization.

4.3.1 The relationship between the internal influencing factors of the Qianzhong Tunpu settlement and the spatial diversity

In the equation, ST is the Tunpu type, PCCL is the per capita cultivated land, and MT is the main transportation.

In the equation, Rc is road connectivity and PCAI is annual per capita income.

The diversity of urban spatial types is an important indicator to reflect urban vitality [21], and the changing trend of spatial diversity reveals the law of urban expansion. Usually, in the scale change of urban spatial, urban diversity changes significantly along the population density gradient, as the distance from the central city [20,32], resulting in significant differences in urban-rural gradient diversity [14]. Previous studies have pointed out that the urban-rural gradient decreases in a pattern of physical decay from the inside to the outside, resulting in the hollowing out of rural industry and population [33]. However, this study showed that the ranges of different spatial scales, military Tunpu and commercial Tunpu was in line with the law of urban diversity change. They all performed as decreasing from the inside to the outside, which is different from the diminishing law of diversity of the expansion of the urban center to the periphery. The diversity of residential Tunpu α shows a trend of increasing from the core area to the expansion area, which is obviously different from the single diversity characteristics under the urban and rural gradient, which confirms that the expansion of the Tunpu settlement has a variety of spatial evolution mechanisms [25]. Through the results of β diversity, it can be concluded that the spatial similarity between military Tunpu and commercial Tunpu is relatively high, and the dissimilarity between residential Tunpu is larger, which may be related to the more prominent defensive cultural characteristics and rich spatial functions of military Tunpu and commercial Tunpu. It also reflects from the side that due to the stricter defensive guard needs and scale requirements of military Tunpu and commercial Tunpu, the strict spatial hierarchy and the same or similar defense system different from that of residential Tunpu are characterized [26,34], explaining that the spatial type differences of Tunpu settlements have significant cultural dependence. Through field research, it was found that the public landscapes such as streets, alleys, watchtowers, and Tunpu walls with extremely obvious defensive functions in military Tunpu and commercial Tunpu were relatively well preserved in historical style, while the damage to the landscape of residential Tunpu was relatively serious. It shows that the Tunpu types with strict military needs are less affected by the homogenization and destructiveness of urbanization expansion, which further indicates that the defensive function dominates the spatial representation of Tunpu settlements, and the hierarchy of the defense system is inseparable from the formation and development of Tunpu settlements [35,36]. Comparing the study areas of the sample settlements, it was found that unlike the decreasing trend of human activity along the urban and rural gradient in urban expansion [13], the Tunpu settlement showed a strong anthropogenic vitality in the expansion area under the influence of urbanization, which was contrary to the law of urban spatial diversity, and to a certain extent, it reflected that the intensity of anthropogenic activities had a counter-effect on the spatial diversity of Tunpu settlements. Although the Tunpu settlement as a whole shows low spatial diversity compared with the urban spatial diversity, but its diversity index shows certain laws, which explains the applicability of the diversity index system based on ecological theory in the study of spatial diversity of traditional settlements at home and abroad.

5.2 The driving mechanism of spatial diversity between the spatial network and spatial morphology of the Tunpu settlement

A settlement space is a system built by the interconnection, influence and action of different elements [39]. The specific socio-cultural and natural environment allows the material space of traditional settlements to manifest itself in a diverse form [42]. The diversity of spatial patch types as functional division units can also effectively reflect the spatial variation law of traditional settlements. This study shows that the spatial diversity of The Qianzhong Tunpu settlement is a comprehensive response under the synergy of multiple driving factors such as natural environment, social economy, policy support and cultural customs, which confirms the inevitable impetus of external influencing factors on the evolution of the spatial system of traditional settlements [13,26,43,44,45,46,47]. From the perspective of influencing factors, the gradual regression equation is further analyzed, and the correlation between cultural customs and social economy on the spatial diversity index of Tunpu settlement is more significant, which indicate that cultural customs and social economy have a strong guiding effect on Tunpu settlement. It was confirmed that socio-economic and cultural practices played an important role in maintaining stable spatial systems and evolution of traditional settlements [42,48,49,50]. Through the survey, it is found that the qianzhong Tunpu settlement area lacks the necessary economic development factors, and there is a significant weakening trend in the cultural identity of the settlement residents. Therefore, in the process of protection and development of the Tunpu settlement, it is necessary to attach importance to the guiding role of culture in spatial diversity, develop economic factors that conform to the endogenous logic of the settlement, and improve the economic level of the settlement residents in order to carry out effective protection and development.

The authors have no competing interests.

All authors contributed to the entire paper, although Hongyi Ge curated the data, writing the paper and all authors was  involved in date acquisition and processings. All authors read and approved the fnal manuscript.

We thank the Department of Housing and Urban-Rural Development of Guizhou Province in China for the data support of this paper, and thank the three teachers for their useful suggestions on this manuscript.