Background: Bladder Urothelial Carcinoma(BLCA) is one of the most common tumors of the male urinary system. It is highly heterogeneous and there is still a lack of biomarkers to predict prognosis in patients with advanced BLCA. senescence-associated secretory phenotype (SASP) plays an important role in tumor and many studies have shown that it is closely related to the immune microenvironment. The aim of this study was to investigate the prognostic value of SASP-related genes and BLCA immune infiltration.

Conclusions: In conclusion, our study confirms the influence of SASP-related genes in BLCA on the prognostic value and immune microenvironment. This will provide important evidence for future research on the role of SASP in BLCA.

Cancer is the leading cause of death in countries around the world and an important barrier to improving life expectancy [1]. Bladder cancer, as one of the three major tumors of the urinary system, is one of the top ten tumors with the highest incidence, with 573,000 new cases in 2020[2]. Bladder cancer has traditionally been classified as non-invasive bladder cancer (NMIBC) or muscle-invasive bladder cancer (MIBC). NMIBC is the most common and has the highest recurrence rate, and MIBC has a high rate of metastasis and mortality[3]. Chemotherapy, immunotherapy and targeted therapy are the preferred treatments for patients with advanced bladder cancer. However, treatment outcomes in patients with advanced bladder cancer have been unsatisfactory due to drug resistance, individual differences, and a lack of reliable prognostic biomarkers. Studies have shown that BLCA patients benefit significantly from adjuvant chemotherapy and new immune checkpoint inhibitors (ICIs)[4]. However, due to tumor immune evasion, a significant proportion of patients do not respond to immunotherapy at all stages of BLCA[5]. Therefore, it is important to study the immune microenvironment of bladder tumor and to find effective biomarkers that can be used to identify and predict the survival of bladder patients.

Senescence has long been known as a tumor suppressor mechanism. However, paracrine signaling in senescent cells has recently attracted attention for its pro-tumor role. Senescence is a damage-induced stress process that activates a range of cytokines, chemokines, growth factors, and age-related secretory phenotypes (SASP) proteases, Finally, it leads to the permanent suppression of tumor cells and the remodeling of tumor immune microenvironment[6]. Therefore, changes in secretion and surface composition of senescent cells provide research directions for existing and new immunotherapy strategies.

RNA-sequencing expression (level 3) profiles and corresponding clinical information for BLCA were downloaded from the TCGA dataset(https://portal.gdc.com). Consistency analysis by using ConsensusClusterPlus R package (v1.54.0), the maximum number of clusters is 6, and 80% of the total sample is drawn 100 times, clusterAlg = "hc", innerLinkage='ward.D2'. Use the R software package pheatmap (v1.0.12) for clustering heatmaps.

Establishment of a prognostic model of SASP-related genes in BLCA

RNA-sequencing expression (level 3) profiles and corresponding clinical information for BLCA were downloaded from the TCGA dataset. Converting counts data to TPM and normalizing the data log2 (TPM+1), keeping samples with clinical information at the same time. Finally there are BLCA samples for subsequent analysis. Log-rank test was used to compare differences in survival between these groups. The timeROC (v 0.4) analysis was used to compare the predictive accuracy of BLCA gene and risk score. Lasso: The least absolute shrinkage and selection operator (LASSO) regression algorithm was used for feature selection, 10-fold cross-validation was used, and the R package glmnet was used for the analysis. For Kaplan-Meier curves, p-values and hazard ratio (HR) with 95% confidence interval (CI) were generated by log-rank tests and univariate cox proportional hazards regression. All the analysis methods and R packages were implemented by R (foundation for statistical computing 2020) version 4.0.3. p value <0.05 was considered statistically significant.

SASP-related genes were screened in BLCA

ConsensusClusterPlus (v1.54.0) is used for consistency analysis.  Based on the expression level of selected SASP-related genes and the proportion of fuzzy clustering measures, k = 2 was determined to be the best clustering stability from K = 2 to 6 (figure 3A-B). Subsequently, we analyzed the expression of SASP-related genes in these 2 clusters, and found that 11 genes were highly expressed in cluster 2, 4 genes were highly expressed in cluster 1, and 3 genes showed no significant difference between cluster 1 and cluster 2(figure 3C-D). We also analyzed OS and PFS of clusters 1 and 2 in bladder cancer, and the results showed that cluster 2 was significantly associated with poor prognosis of BLADDER cancer OS and PFS (figure 3E-F). Subsequently, differences were noted in the clinicopathological characters and prognosis between the two subtypes, as shown in Table 1. There was no statistical significance between the two clusters except for age and sex (P > 0.05), and other pathological features were statistically significant. 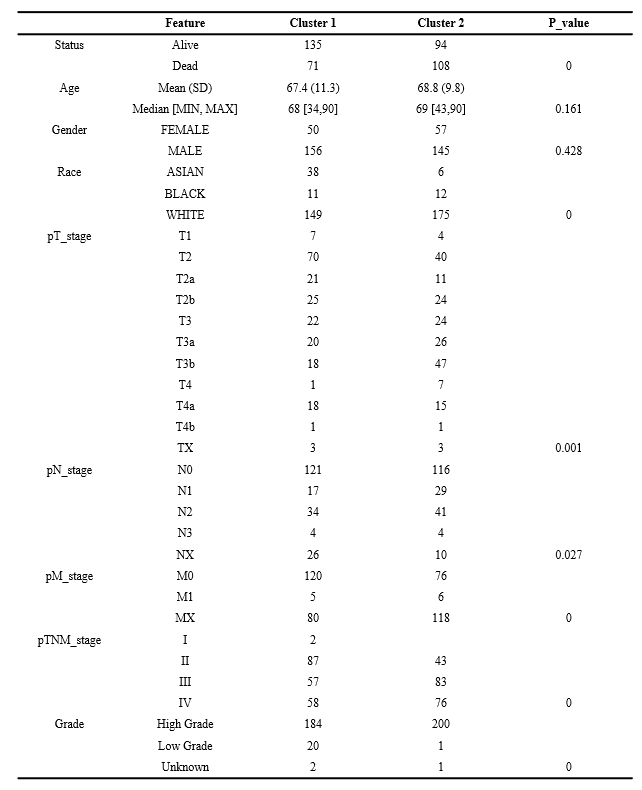 In order to investigate the effect of SASP-related genes on the immune microenvironment of bladder cancer, TIMER and CIBERSORT methods were used to evaluate the relationship between cluster 2 and genes related to immune cells and immune examination sites. The classification of the two subtypes based on expression levels of selected SASP-related genes revealed significant differences in immune cell infiltration (figure A-D). In addition, we also analyzed the relationship between cluster 2 and immunoassay sites, and the results showed that there were significant differences in the expression of genes related to immunoassay sites in cluster 2 (figure 4F). PD-L1 (CD274) plays an important role in the immunotherapy of bladder cancer. Therefore, we detailed the expression of PD-L1 in two clusters, and the results showed that the expression of PD-L1 in cluster 2 was significantly higher than that in cluster 1 (P=3.1e-18)（figure 4E）. Therefore, we believe that SASP-related genes play an important role in the immune microenvironment of bladder cancer.

Considering the clinicopathologic features and these 12 prognostic SASP-related genes, we also built a predictive nomogram to predict the survival probability. Univariate and multivariate analyses showed that HLA-G, EGFR, CD36 expression, age and pTNM stage were independent factors affecting the prognosis of BLCA patients (figure 6A-B). The predictive nomogram suggested that the 3‐year and 5‐year overall survival rates could be predicted relatively well compared with an ideal model in the entire cohor (figure 6C-D).

Construction of a predictive nomogram. (A-B): The risk ratios and P values of the components involved in univariate and multivariate Cox regression for clinical parameters of BLCA and 12 SASP-related genes. (C-D): Nomogram to predict the 1, 3, and 5 year overall survival rate of BLCA patients. Calibration curve for the overall survival nomogram model in the discovery group. A dashed diagonal line represents the ideal nomogram.

Key SASP genes in BLCA were obtained by screening

PD-L1 plays an important role in immunotherapy of various tumors, including bladder cancer.   Correlation analysis of PD-L1 with 12 SASP-related genes in BLCA prognostic model showed that PD-L1 was positively correlated with CD36, EGFR, HLA-G, IGF1, NFKB1, PRKG1, and negatively correlated with SPINK1, SRC, and VEGFA (figure 8A). Subsequently, we took the cross points of the gene set with high expression of SASP-related genes in bladder cancer, the gene set with positive correlation with DP-L1, and the gene set with significant difference in multivariate analysis of the genes in our prognostic model, we get a single gene：HLA-G (figure 8B). We also showed the correlation between PD-L1 and HLA-G in detail (correlation coefficient: 0.33, P = 7.29E-12, figure 8C). Sankey diagram showed the distribution trend of HLA-G expression on age, pTNM stage, grade and BLCA survival in TUMOR samples of BLCA (figure 8D). Finally, in bladder cancer, we grouped high HLA-G expression and low HLA-G expression into groups for KEGG enrichment analysis. The results showed that HLA-G expression was significantly correlated with 'Th1 and Th2 cell differentiation' and, 'Th2 cell differentiation', suggesting that HLA-G plays an important role in tumor immune microenvironment.

To identify a discrepancy in the TIME of BLCA patients with high and low expression levels of HLA-G, the TIMER and CIBERSORT algorithm was carried out to explore the difference of numerous immune cell subtypes between the HLA-G high expression group and the low expression group in BLCA. TIMER algorithm showed that the B cell, T cell CD4+, Neutrophil and Myeloid dendritic cells in HLA-G high-expression group were significantly increased(p＜0.001)，CIBERSORT algorithm showed that T cell CD8+, T cell CD4+ memory activated and Macrophage M1 were significantly increased in HLA-G high expression group（p＜0.001）（figure 9A-B）, and the heat map visualized the percentage of abundance of tumor-infiltrating immune cells in each sample of low and high HLA-G group (figure 9C). 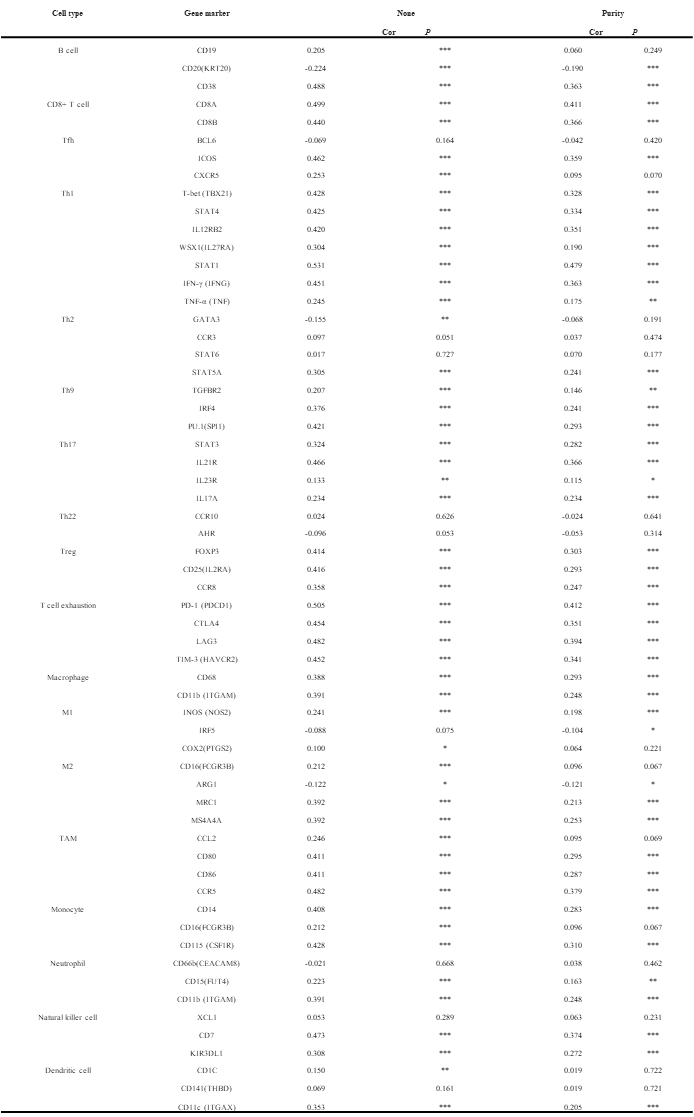 Immunomodulator is an important substance that affects the function of immune system. This study showed that HLA-G expression was positively correlated with Immunoinhibitor, and P < 0.001 (Figure 11A). Meanwhile, we also found that HLA-G expression was closely related to immunestimulants and chemokines (figure 11B-D). These results suggest that HLA-G is closely involved in the regulation of immune interactions and may regulate tumor immune escape.

Bladder cancer is one of the top ten tumors with high morbidity and mortality. In-depth study of bladder tumor immune microenvironment and search for effective biomarkers that can be used to identify and predict the survival of bladder patients can improve the prognosis of bladder cancer patients. In cancer, although cell senescence can be used as a mechanism to inhibit tumor development, SASP produced by cell senescence can promote the treatment resistance and recurrence of cancer [10]. Senescent cells often play a deleterious role in TME, especially those in SASP in advanced cancer [11]. Therefore, SASP plays an important role in tumor immune microenvironment. Here we distinguished two independent subtypes with differential clinical features, prognoses, PD-L1 expression, and TIME via consensus clustering for selected SASP-related genes. Among these, HLA-G was identified as the potential immune infiltration-related SASP-related genes.

The LASSO algorithm analyzes all independent variables simultaneously and selects the most influential variables [14]. According to LASSO Cox analysis, 12 of 18 genes (MAPK3,SRC,CD36,VEGFA,IL4,HLA-G,SPINK1,IGF1,EGFR,GATA4,NFKB1,PRKG1) were identified as prognostic factors for BLCA. The predictive power of SASP-related genes on BLCA prognosis was evaluated by the ROC curve. The results demonstrated that SASP-related genes were involved in the survival of BLCA. We also analyzed the correlation between the prognostic model constructed by SASP-related genes and immune infiltration. The results of TIMER method showed that B cell, T cell CD4+,T cell CD8+,Neutrophil,Macrophage and Myeloid dendritic cell was positively correlated with SASP-related genes prognosis model(Fig. 7A) .SASP-related genes prognosis model was positively correlated with cytotoxicity score, NK cell, B cell, Macrophage/Monocyte, Myeloid dendritic cell, Endothelial cell by MCPCOUNTER method.

In addition, TIMER2.0 and TISIDB databases were used to evaluate the correlation between HLA-G expression and biomarkers of tumor immune infiltrating cells, immunostimulants, immunosuppressants, chemokines and receptors in bladder cancer, and the results showed that HLA-G expression was significantly correlated with all of them. This further proves that HLA-G expression plays an important role in immune invasion in bladder cancer. In this study, we conducted a comprehensive bioinformatics investigation to systematically analyze the clinical significance and expression level of SASP-related genes in BLCA. In addition, our data suggest that HLA-G expression is closely related to the degree of infiltration of different immune cells, immune stimulants, immunosuppressants, chemokines and receptors in BLCA. Therefore, our study provides insight into the key functions of SASP-related genes, of course, this study has some limitations. The model we built is based on online database, without validation from independent cohorts, so we need more studies to verify our conclusions.

This study systematically analyzed the expression profile of SASP-related genes in BLCA and its correlation with prognosis, PD-L1 and its role in TIME. Favorable prognostic biomarkers for BLCA were found by constructing prognostic model. In conclusion, our study provides important evidence for future research on the role of SASP in BLCA.

Ethical approval and consent to participate

Wang Yaxuan wrote the full text, and Xiaolin Wang and HaiXia Zhu was responsible for reviewing it.

This study was supported by the Scientific research project of Jiangsu Provincial Health Commission（M2021005）.

The datasets analyzed during the present study are available from The Cancer Genome Atlas (TCGA) database (https://portal.gdc.cancer.gov/)，GenesCords（https://www.genecards.org/），STRING（https://cn.string-db.org/）,TIMER2.0（http://timer.cistrome.org/）,and TISIDB ( http://cis.hku.hk/TISIDB/index.php ).