Background: Breastfeeding is considered the biological norm and essential to reduce infant morbidity and mortality. Mothers are responsible for breastfeeding but the support of others, including their partners is an influential determinant. The aim of this study was to compare antenatal breastfeeding knowledge, attitudes, and perceived breastfeeding support of expectant couples in Mekelle, Ethiopia.

Methods: As part of a randomised controlled trial of an mHealth intervention, 128 couples in their third trimester from three selected health centres in Mekelle city were recruited to participate between September and October 2018. Couples who each had a personal mobile phone, read and spoke Tigrigna, and lived together were included.  Baseline data on breastfeeding knowledge, attitudes, and perceived support (breastfeeding savvy, help, appreciation, presence and responsiveness) were collected using previously validated tools through interview by health workers.

Breastfeeding is the biological norm and the optimal mode for feeding infants to reduce morbidity and mortality [1]. Although more than 80% of neonates are “ever breastfed” globally, only 50% initiate breastfeeding (baby put to the breast within an hour of birth) [2, 3], and only one-third of infants are exclusively breastfed for the first six months of their life [2, 4, 5]. Sub-optimal infant feeding practices, including pre-lacteal feeding (the feeding of an infant with something other than breastmilk in the first three days of life), non-exclusive breastfeeding, and use of artificial infant formula contribute to 1.4 million child deaths globally [6]. In Ethiopia, only 60% of babies are exclusively breastfed for the first six months [7]. While the Ethiopian government had set a goal of improving the level of exclusive breastfeeding to 70% by 2015, there has only been a one percent improvement in exclusive breastfeeding rates over the last five years [8]. In Ethiopia, non-exclusive breastfeeding was the cause for significantly higher risks of neonatal [9] and infant [10] mortality, and acute malnutrition [11].

Modifiable factors, which impact maternal breastfeeding practices are primarily psychosocial components, including maternal intention to breastfeed, attitudes, self-efficacy and social support during lactation [13]. These psychosocial factors can be potentially modified through interventions focussed on breastfeeding education and promotion [13, 27].

Three health centres with the highest number of mothers attending ANC follow-up were purposively used as recruitment sites. A total of 293 mothers attending their antennal care (ANC) in these three public health centres were approached by nurses either in person at the health centre during the ANC appointment or via a phone call to check eligibility criteria. Eligible couples satisfied the following inclusion criteria: able to read and understand the local language (Tigrigna), living in a union, mother had no known medical issues that could hinder breastfeeding, there were no known issues with the foetus or pregnancy and both members of the couple were able to provide a written informed consent. Based on these criteria, 128 expectant couples were included in this study.

Data were collected through a face-to-face interview between September and October 2018 by trained nurses working in the health centre. A modified version of the cross-cultural adaption process was utilised, in which the questionnaires were translated to Tigrigna, after which the Tigrigna versions of the questionnaires were back-translated to English by two public health nutrition experts from Mekelle University [37]. Finally, face validity to check for understanding and language was conducted for all questionnaires with fathers and mothers who had children under two years of age but not reliability and validity assessment.

Questions on father and mother characteristics such as age, educational status, income, and employment status; and pregnancy and childbirth-related variables such as parity, ANC provider, number of ANC appointments, breastfeeding information during ANC, breastfeeding experience, maternity leave provision, and breastfeeding intention were developed based on the literature [12, 13, 17, 22, 38].

Breastfeeding knowledge/awareness was assessed using a questionnaire adopted from the Food and Agricultural Organization (FAO) of the United Nations (UN) [39]. This questionnaire has ten open questions, which were later coded into Yes or No responses, based on the protocols. Each correct answer was scored, responses were totalled, and the percentage of correct responses recorded. Breastfeeding attitudes were measured using the Iowa Infant Feeding Attitude Scale (IIFAS). This tool has 17 questions, and uses a five-point Likert scale ranging from 1= strong disagreement to 5= strong agreement [40]. Out of the 17 questions nine were reverse scored, thus, these responses were recoded before calculating the total attitude score. The total score was calculated out of 85, with a minimum of 17 and maximum of 85. The questions are non-gendered and can be asked to men and women without modification.

The data was analysed using IBM SPSS Statistics version 23 (IBM Crop. Released 2015. IBM SPSS Statistics for Windows, Version 23.0. Armonk, NY: IBM Crop). After data cleaning and coding, descriptive statistics were conducted. Sociodemographic characteristics were presented using frequency and percentage or mean with standard deviation. Normality tests were performed for each continuous variable using skewness test. Based on these tests further analyses were selected. Independent T-test or ANOVA, and Mann-Whitney U Test or KRUSKAL Wallis test were used for normal distribution and non-normally distributed data, respectively. Once the explanatory variables were fitted with the dependent variable (gender) variables with p-value <0.05 were considered as having significant difference among mothers and fathers. Reporting follows the STROBE guidelines for cross-sectional studies.

In this study 128 expectant couples participated. About half (46%) of the participants were first-time parents. Almost half (47%) of mothers did not have paid employment, and only a quarter (26%) of mothers and nearly a third (30%) of fathers had been educated beyond secondary school. (Table-1). 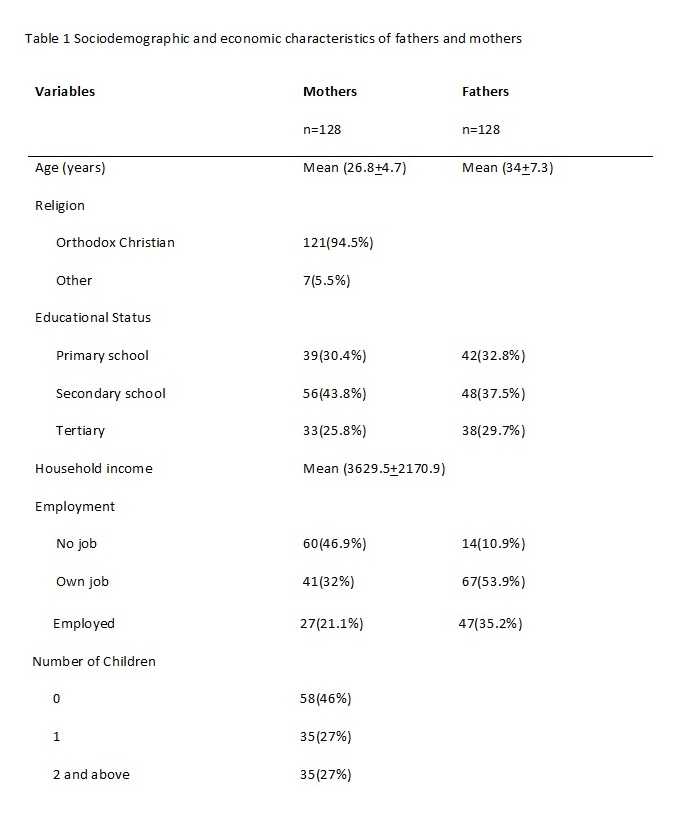 Among the 128 expectant couples more than half 71 (56%) received their first antenatal care (ANC) for the current pregnancy at four to six months of gestation, and 73 (57%) of them made two or three ANC visits to the health centre. Among the 70 (55%) of mothers who had previous breastfeeding experience, three-quarters (75%) had breastfed their last baby for more than two years. Almost all, 125 (98%), of mothers intended to exclusively breastfeed their babies for the first six months (Table-2). 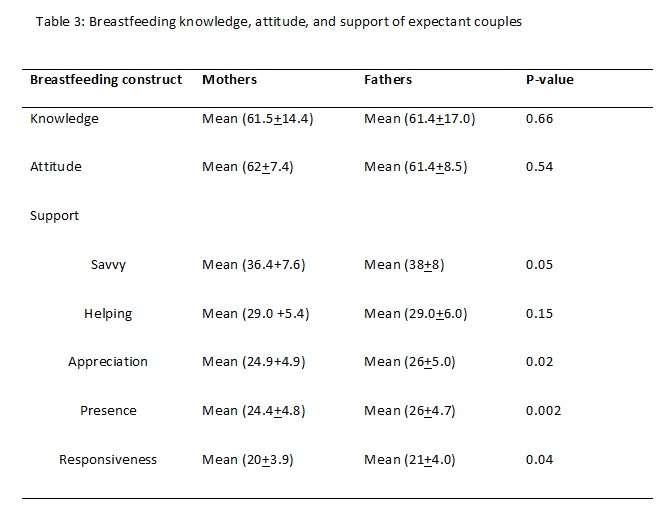 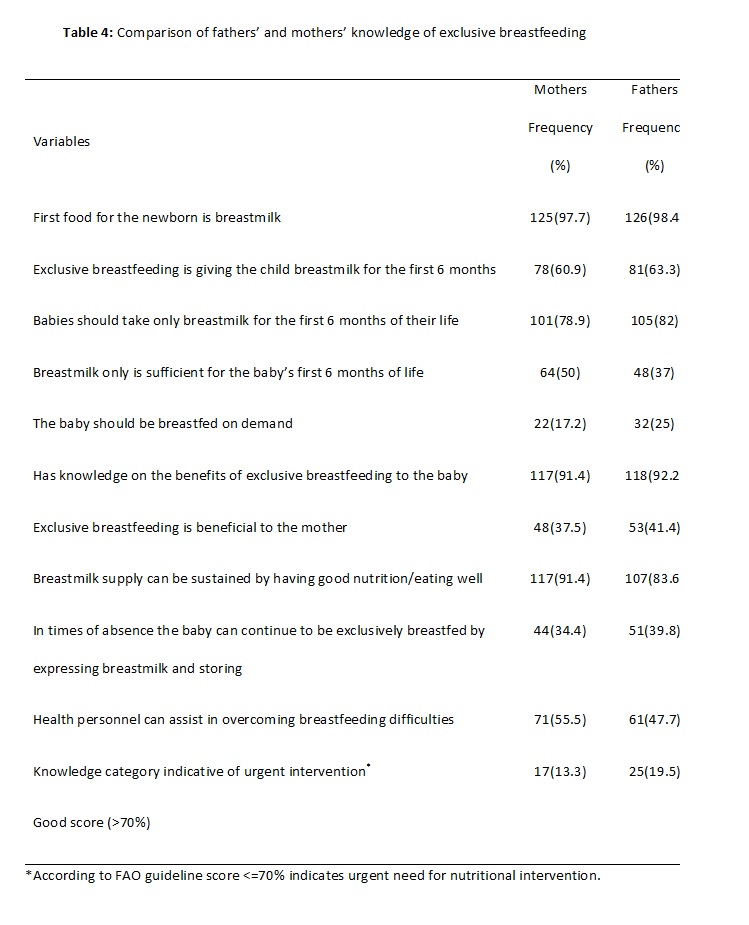 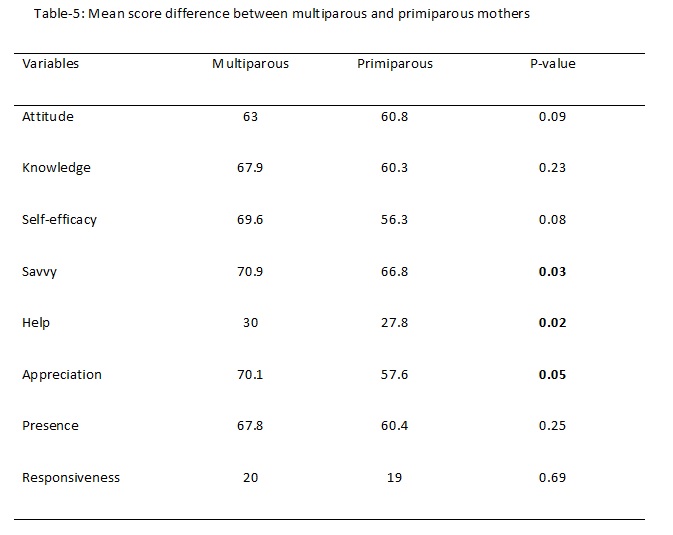 Fathers believe encouraging and showing appreciation to their partner during breastfeeding is one way of providing support to mothers to improve breastfeeding practice [49]. The current study showed that fathers scored better regarding their intentions to encourage and value breastfeeding compared to the perception of mothers regarding their expectations of partner support. Multiparous women had higher expectations possibly based on previous experience. While such a difference is perhaps to be expected, the low expectations of mothers is something that could be addressed. Fathers indicated that they could help their partners by encouraging breastfeeding. According to the assessment of Alive & Thrive in the Tigray region, Ethiopian, fathers have a strong interest in improving their knowledge in relation to child feeding and have reflected their willingness to support their partners [35]. According to Tohotoa et al. [36] mothers believe that fathers make a difference in encouraging mothers to do the best thing with regard to breastfeeding. A previous study has shown that, mothers who perceived that their partners preferred breastfeeding were less likely to cease breastfeeding at any time compared to those who perceived their partners preferred bottle-feeding, or were indecisive about how their child was fed [28]. Therefore, future interventions should emphasise the importance of encouragement and showing appreciation for breastfeeding among both fathers and mothers.

Responsiveness is an individual’s belief about how their partner understands, cares and validates their decisions [41]. According to the current study fathers’ perceptions regarding their responsiveness or the degree to which fathers were sensitive to the needs of their partners and respected their decisions was significantly higher in fathers compared to mothers. Again, this is to be expected and for mothers with previous experience based on this prior experience. Fathers’ breastfeeding responsiveness improves maternal breastfeeding satisfaction, helping mothers to comfortably breastfeed and to continue breastfeeding [41]. When fathers have positive attitude towards and the ability to provide the required breastfeeding support to their partner, they can bring a significant change to maternal breastfeeding practice [55]. The positive perception of fathers in the current study and whether they are able to provide the required support with regard to breastfeeding responsiveness indicates they could have a positive influence on breastfeeding practice. However, the low expectations of mothers regarding the support their partners could provide potentially hinders their involvement and the provision of this support.

One of the strengths of this study is that it is one of only a few studies comparing breastfeeding related knowledge, attitudes, and intended/expected support among expectant parents. As the data was collected during the antenatal period and therefore not reliant on retrospective memory. There are however a number of limitations. The data could be subject to social desirability bias, as the data were collected by trained nurses from the health centre attended by the couple. Although the tools went through face validity, but reliability and validity testes were not conducted in Ethiopian context. In addition, there were no indications of other support provided in the household that may have attenuated the expectation and intention to provide support. For example, the presence of a highly supportive grandparent may have influenced the support provided by the partner. Finally, the sample was limited in size and geographical location and therefore may not be representation of the general pregnant population in Ethiopia.

This study obtained ethical approval from the Human Research Ethics Committee (HREC) of Queensland University of Technology (QUT), UHREC: 1700000717, Australia; and the Health Research Ethics Review Committee (HRERC) of Mekelle University, Ethiopia, ECR: 1194/2017. All participants provided written informed consent. Participation was voluntary with the right to withdraw at any time.

The datasets used and/or analysed during the current study are available from the corresponding author on reasonable request.

Authors declare there no conflict of interest

This work was supported by Queensland University of Technology (QUT) PhD student allocation and the Child and Adolescent Health (CAH) theme of Institute of Health and Biomedical Innovation (IHBI), QUT. These funding institutions have not played a role in the design, analysis or preparation of this manuscript.

We would gratefully like to thank the study participants, Tigray Regional Health Bureau, and directors of the health centers for facilitating the research, and the data collectors for their help in recruitment and conducting the data collection.