Necessity for subsequent surgery in women of child-bearing age with positive margins after cold knife conization: A retrospective cohort study

Background: Risk factors for positive margins and residual lesions after cold knife conization (CKC) for high-grade cervical intraepithelial neoplasias (CIN) were assessed in women of child-bearing age. A design for postoperative management and avoiding these situations is offered.

Methods: This was a retrospective study on 1,309 premenopausal women with high-grade CIN (including CIN3 and CIN2) based on a cervical biopsy under colposcopy used to diagnose a positive or negative margin. Age, gravidity, parity, HPV species, cytology, transformation zone type, results of endocervical curettage (ECC), quadrant involvement, glandular involvement, and CIN grade were analyzed. Among those with positive margins, 245 underwent surgery within three months, including CKC, a loop electrosurgical excision procedure, and total hysterectomy. Residual lesions were also assessed.

Conclusion: High-risk women should be treated appropriately considering fertility. Patients with positive margins should be managed uniquely. Surgery for women without fertility may be appropriate. Close follow-up is necessary for women who have fertility requirements or are unwilling to undergo subsequent surgery if they have no risk factors, especially for women <35 years.

In 2015, the American Society of Colposcopy and Cervical Pathology (ASCCP) recommended that one of the standard treatment options for cervical squamous intraepithelial lesions (SILs), especially high grade SILs [HSILs, including cervical intraepithelial neoplasia 3 (CIN3) and part of CIN2], was cervical conization,[1] including the loop electrosurgical excisional procedure (LEEP) and cold knife conization (CKC). However, these two types of conization have a common limitation; that is, 20–25% of women have residual lesions after an operation.[2] The state of the margin is generally considered to be a risk factor for recurrence or persistent CIN.[3, 4] A comprehensive meta-analysis by Ghaem-Maghami revealed that the rate of positive margins after conization was about 23.0% (8,091/35,109).[5] With improvement of people’s awareness of health care and advances in detection technology, the age of onset for this disease is becoming increasingly younger. Furthermore, due to changes in China’s family planning policy in recent years, an increasing number of women of child-bearing age have fertility requirements. To explore the risk factors of positive margins and residual lesions of high-grade CIN in the women of child-bearing age, the clinicopathological data of 1,309 women of child-bearing age with high-grade CIN (including CIN3 and CIN2) and 245 cases with positive margins who underwent subsequent surgery within three months were retrospectively analyzed. The results of our study can be used to guide the postoperative management of this group of women.

Case inclusion criteria were women of child-bearing age who had been diagnosed with HSIL by biopsy, including CIN3 and part of CIN2. All women were premenopausal women. Case exclusion criteria were women with complications, such as endometrial carcinomas; cervical cancer including micro-invasion; incomplete information, such as lacking correlations among cytology, biopsy, and colposcopic findings; and no contact information.

A total of 1,309 women of child-bearing age with HSIL (including CIN3 and part of CIN2) in Tianjin Central Hospital of Gynecology and Obstetrics from January 2013 to December 2019, aged from 20 to 49 years old, were diagnosed with a "three-step" method, including cytology, colposcopy, and histology. [6] All women were premenopausal women. Among them, 245 women underwent subsequent surgery within three months. Age, gravidity, parity, HPV species, cytology, transformation zone type, the results of endocervical curettage (ECC), quadrant involvement, glandular involvement, and CIN grade were recorded. The data were collected from the electronic medical records of the institution while preserving patient anonymity. The research ethics committee waived the requirement for ethical approval and informed consent because the study used previously stored data.

If HSILs were found in the resection margin of about 1 mm or less, including the ectocervical margin, endocervical margin, or both, it was regarded as a positive margin. If HSILs were diagnosed in women who underwent secondary surgery within three months, it was assumed to be a residual lesion. CIN1 was not considered to be a residual lesion in this study.

SPSS21.0 software was used for statistical analysis (SPSS Inc, Chicago, IL, USA). The statistical methods were examination of exact probabilities in a fourfold table and chi-squared tests. Multivariate analysis was performed using a logistic regression model. All tests were two-sided, and the level of significance was set at P < 0.05. 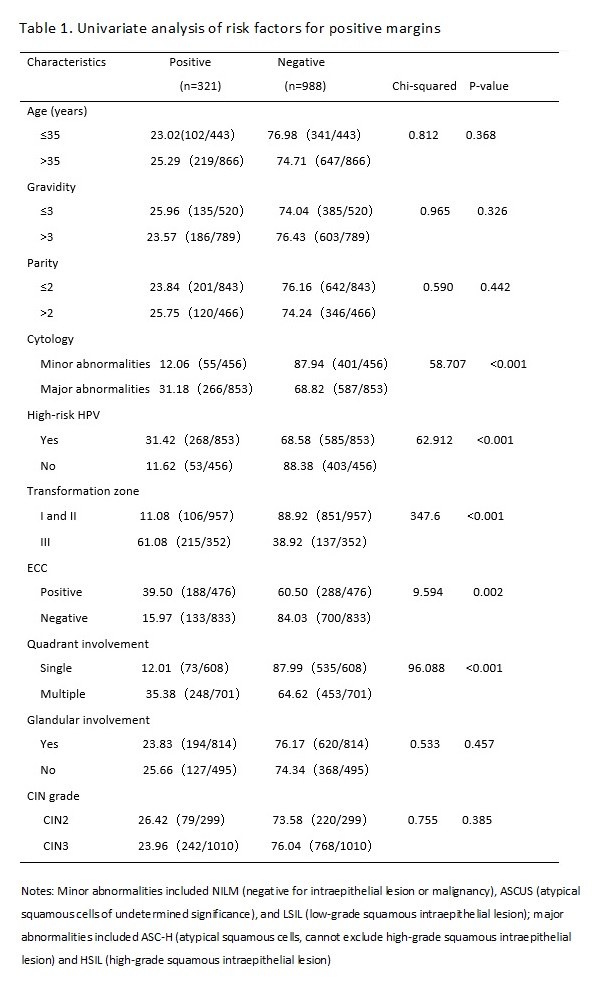 Logistic analysis of the risk factors for positive margins 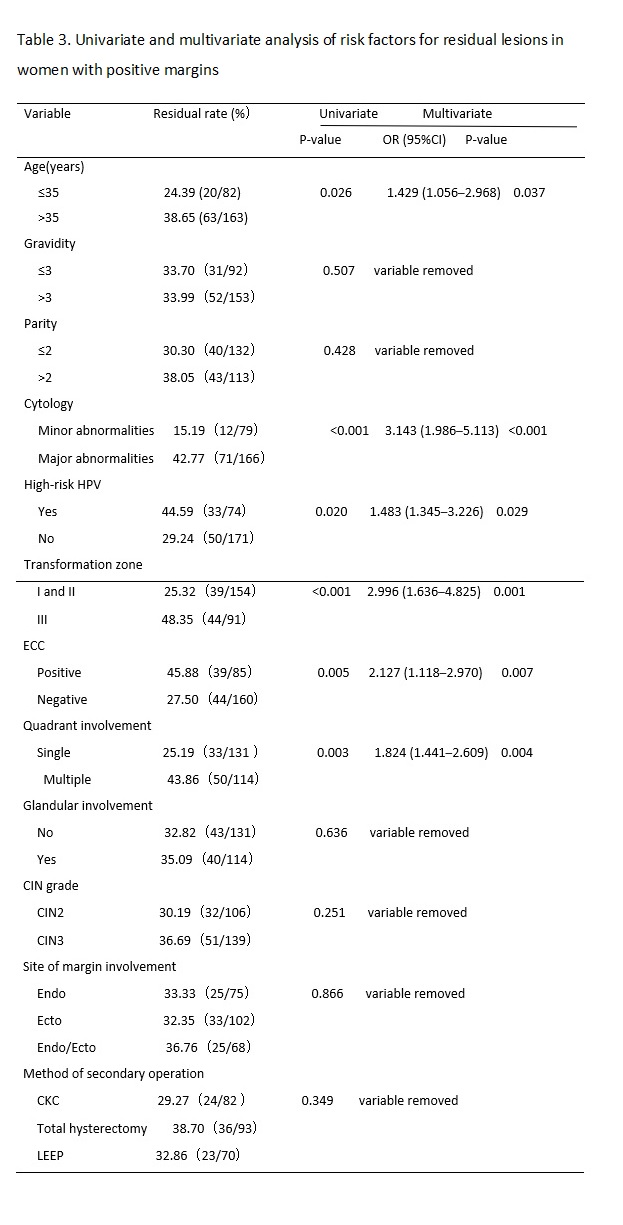 The results of previous studies have suggested that the possible risk factors for residual lesions after cervical conization mainly include positive margins of the specimen, involvement of the lateral margin of the cervical canal, involvement of the lateral margin of the cervical canal and outer orifice, positive specimen from ECC, menopause, persistent infection of high-risk HPV after cervical conization, and decreased or suppressed immune function.[13, 14] Many factors affect the condition of the margin after CKC, including age, menopausal status, glandular involvement, smoking, infection, training level of the operator, and other factors.[15, 16] In this study, we retrospectively analyzed the clinicopathological characteristics of 1,309 women of child-bearing age after initial CKC and 245 cases of women with positive margins who accepted subsequent surgery within three months. We found that a major cytology abnormality (including HSILs and ASC-Hs), high-risk HPV infection type III transformation zone, positive ECC result, and multiple quadrant involvement were the common risk factors for positive margins and residual lesions. Age > 35 years was also a risk factor for residual lesions in women with positive margins after initial CKC.

In addition, we also found that women with a type III transformation zone were more likely to have positive margins and residual lesions after an operation. This may be due to the lesion invading the cervical tube. CKC cannot completely remove diseased tissue. In the same way, the rates for positive margins and residual lesions in women with positive results of ECC were higher than that of negative results. The same results were found in previous studies.[23, 24] Researchers also found that multiple quadrant involvement was a risk factor for positive margins and residual lesions.[25, 26] We came to the same conclusion based on our study results. In this study, the rate of multiple quadrant involvement was 77.26% in the women with positive margins, and that in the women with negative margins was 45.85%. Increases in the range of lesions likely affected observations during the operation, interfered with the judgment of surgical margins, and increased the difficulty of surgery. The above factors should be taken into account in the process of cervical conization to achieve the goal of leaving no residual lesions and preserving cervical function to a greater extent; that is, we should pay more attention to the extent and depth of lesions removed by cervical conization.

There was no significant difference between women of age > 35 years and ≤ 35 years in the rate of positive margins, but there was a significant difference in the rate of residual lesions between the two age groups. The rate of residual lesions in the age > 35 years group was higher than the ≤ 35 years group (P < 0.03). This may be due to the persistent infection of HPV, especially high-risk HPV. Sarian reported that women older than 35 years had a significantly higher risk for persistent infection following LEEP.[27] This could cause multiple quadrant lesions of the cervix.(30) Furthermore, the older the patient, the higher the degree of cervical atrophy. The cervical transformation zone and lesions therefore moved inward to the cervical canal, so cervical conization could not completely remove the diseased tissue. Bilibio also considered that increasing age was the only factor that accurately predicted residual disease.(18) All of these results indicated older age was a predictive factor for residual lesions and it can play a better role in guiding the formulation of a postoperative treatment plan for women of child-bearing age with positive margins. Subsequently, we can preserve normal reproductive function and organ integrity as much as possible in women younger than 35 years old.

A major cytology abnormality (including HSILs and ASC-Hs), high-risk HPV infection, type III transformation zone, positive ECC result, and multiple quadrant involvement were the common risk factors for positive margins and residual lesions. Age > 35 years was also a risk factor for residual lesions in women with positive margins after initial CKC. Experienced doctors should treat these high-risk women appropriately, operate prudently, and expand the scope of the operation while considering the patient’s fertility requirements. Furthermore, the patient with positive margins after CKC should be managed individually. It is reasonable to require further surgical treatment in women without fertility requirement, and close follow-up is necessary for women who have fertility requirements or are unwilling to undergo subsequent surgery if they have no risk factor, especially for women < 35 years.

This retrospective analysis was exempt from ethics committee approval at Tianjin Medical University, Tianjin Central Hospital of Gynecology and Obstetrics, because the committee did not consider approval was necessary for a retrospective chart review.

The data were collected through the electronic medical records of the institution while preserving patient anonymity, and the research ethics committee waived the requirement for informed consent because the study used previously stored data.

All data generated or analysed during this study are included in this published article [and its supplementary information files].

All authors declare that: (i) no support, financial or otherwise, has been received from any organization that may have an interest in the submitted work ; and (ii) there are no other relationships or activities that could appear to have influenced the submitted work.

All authors have read and approved the final manuscript.Acknowledgement

We thank all participants in the study for their invaluable contribution.