Health anxiety and related factors among pregnant women during the COVID-19 pandemic: A cross-sectional study from Iran

Methods: In this cross-sectional study, 300 pregnant women in different trimesters (n=100 in each trimester) were recruited. A demographic questionnaire and the Health Anxiety Questionnaire were used to collect data. Scores of <27, 27-34 and more than 35 were defined as low, moderate and high health anxiety, respectively. Due to nationwide restrictions, data were collected through social media groups. Chi-square tests, ANOVA and multiple linear regression were used to analyze the data.

COVID-19 caused by SARS-COV-2 infection in humans and has affected more than 50 million persons around the world (7). Worry during the COVID-19 pandemic among pregnant women may lead them to refrain from attending clinics for regular prenatal care or to undergo unnecessary Cesarean-section because of fear of mother-to-neonate disease transmission (8). Moyer et al. (2020) evaluated levels of stress and anxiety among pregnant women before and after COVID-19 pandemic. Their results showed that levels of stress and anxiety of pregnant women increased during this pandemic and that most of this anxiety is independent from pregnancy-specific anxiety (9). Additionally, a systematic review by Hassami et al. (2020) showed that depression and anxiety scores were higher among pregnant and postpartum women during the COVID-19 pandemic (10).

Studies have suggested that viral respiratory diseases may cause pneumonia in pregnant women, which may lead to premature rupture of membranes, preterm labor, intrauterine fetal demise, intrauterine growth retardation and even neonatal death (11).

Limited evidence from pregnant women affected by COVID-19 in China and the USA reveal that more than 95% of these women delivered their babies by Caesarean section, as the popularly held belief is that the maternal respiratory disease will be worsen with normal vaginal delivery (the rate of Caesarean section in the USA and China was 32% and 54.5% respectively before the pandemic) (12-14).

COVID-19 is a novel disease and little is known about its characteristics. Iran is facing its third wave of COVID-19 with around 500 deaths per day (15). This study was designed to investigate health anxiety among pregnant women in different trimesters in Iran.

This was a cross-sectional study in which 300 pregnant women were recruited. The design of this study was approved by the Ethics Committee of Ahvaz Jundishapur University of Medical Sciences (Ref No: IR.AJUMS.REC.1399.006). This study started on 20 March 2020 and completed on 10 April 2020. Oral and written informed consent was obtained from each participant. Literate pregnant women in any trimester of pregnancy were eligible for inclusion in this study. Women who had experienced stressful events in the past 6 months, those with a positive test for COVID-19 and those with known mental disorders were excluded from the study.

The sample size was calculated using the following formula (16): 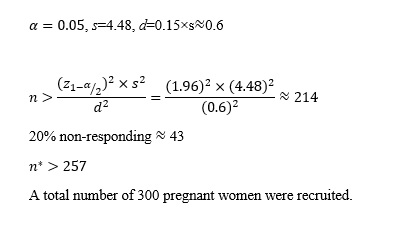 The Health Anxiety questionnaire (17) consists of 18 questions about participants’ worry during the COVID-19 pandemic in Iran. Each question has four response categories ranging from zero (I am not worried about my health) to three (I spend most of my time worrying about my health). The maximum total score of this questionnaire is 54. There are three sub-scales for this questionnaire. The first is related to worry about getting sick, which is reflected in questions 5, 6, 8, 9, 11 and 12. Worry about consequences of disease is the second subscale involving questions 13, 15, 16, 17 and 18, and the third subscale deals with general health concerns, as reflected in questions 1-4, 7, 10 and 14. A total score <27 is defined as low health anxiety, scores of 27-34 are defined as moderate health anxiety, and scores of more than 35 are defined as  high health anxiety. The validity and reliability of the Persian version of Health Anxiety Questionnaire had already been assessed and approved in Iran (18). We also included a question asking women if they thought the COVID-19 pandemic had increased their feeling of anxiety during pregnancy.

All data were entered SPSS version 22. The normal distribution of continuous data was assessed using the Shapiro-Wilk test. The ANOVA test was used for comparing the data across three groups (three trimesters) and the chi-square test was used for comparing categorical data. Multiple linear regression models were used for assessing the relationship of different trimesters and health anxiety, controlling for the effects of history of infertility and results of anomaly screening. P<0.05 was considered statistically significant.

Based on inclusion and exclusion criteria, we assessed 500 women of whom 350 were eligible and provided consent. A total of 300 participants returned the completed questionnaires (n=100 women in each trimester) and were included in the analysis (Figure 1). Table 1 presents the demographic and obstetric characteristics of participants in different trimesters of pregnancy. The mean (SD) age of women was 25.8±5.1, 27.2±5.7 and 26.5±4.5 in the first, second and third trimesters, respectively (p>0.05). Women did not show any significant difference regarding occupation, education, economic situation and their spouses’ level of education across the three trimesters of pregnancy. 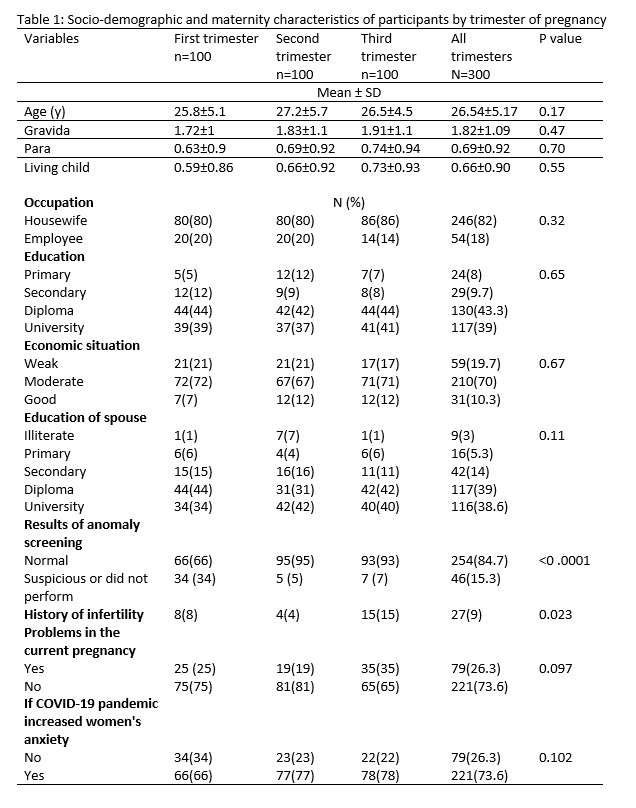 As evident from Table 1, 95% of women in the second trimester of pregnancy had a normal anomaly screening, while 32% of women in the first trimester did not perform these tests or had test with suspicious results. Women in three trimesters showed a significant difference regarding anomaly screening (p<0.0001). The three groups also showed a significant difference regarding history of infertility (p=0.02). As with concerns about their pregnancy, 25%, 19% and 35% of women in their first, second and third trimester, respectively, reported concerns during their pregnancy. These concerns included bleeding in the first trimester, nausea and vomiting, gestational diabetes, and hypertension (p=0.097). Also, 73.6% of women reported that the COVID-19 pandemic had increased their anxiety; most of these women were in the third trimester of pregnancy (78%). 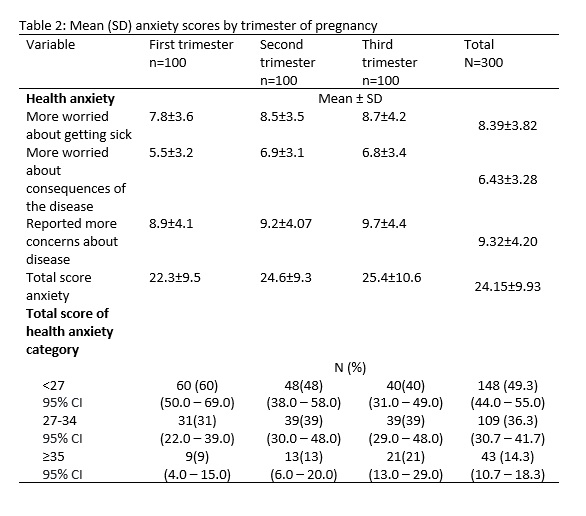 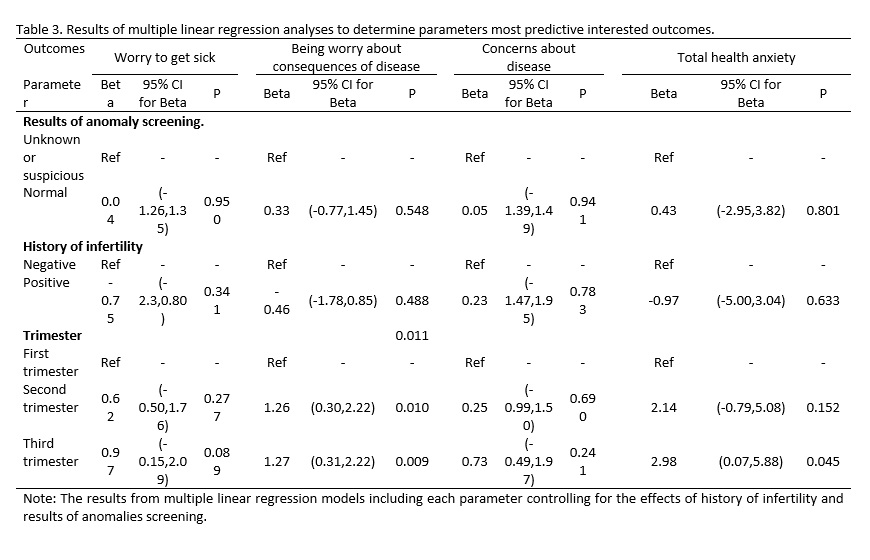 This study was designed to evaluate the health anxiety of pregnant women and its related factors during the COVID-19 pandemic in Iran. The results of this study show that compared with those in their first or second trimester, pregnant women in the third trimester were more worried about getting sick, the consequences of the disease, and concerns about disease. Also, total (mean?) anxiety scores were higher among women in the third trimester of pregnancy. A possible explanation for this may be women’s lack of access to their health providers in time of delivery, or they may be reluctant to go to healthcare facilities or hospitals since they consider such places as being unsafe environments during COVID-19 pandemic (19). A qualitative study by Mizrak et al. (2020) in Turkey showed that fear of the unknown, disruption of routine prenatal care and disruption of social life because of quarantine caused anxiety in pregnant women during the COVID-19 pandemic (20). Another study by Kahyaoglu et al. (2020) in Turkey showed that the prevalence of anxiety and depression among pregnant women during COVID-19 pandemic was 64.5% and 56.3%, respectively (21). Our results are in line with these studies. According to Werner et al (2020), the use of new and diverse models of prenatal care by health care providers can reduce the anxiety of pregnant women in crises such as COVID-19 pandemic (22).

The results of the present study showed that women in the third trimester of pregnancy were more prone to be worried and also had significantly more health anxiety compared to women in the second and the first trimesters of pregnancy. Other studies showed that pregnant women are more worried about different problems in the second and third trimesters of pregnancy (23). In the present study we controlled some confounding factors such as anomaly screening tests. According to the national guidelines in Iran, women should undergo anomaly screening tests including nuchal translucency, and PAPP-A between the 11th and 13th week of gestation. If there is any abnormality in these tests, then women are encouraged to undergo further tests around the 15th week of gestation. We found that 34% of women in the first trimester did not perform any anomaly test or had test results which suggested were abnormal. This may cause undue anxiety in pregnant women in addition to COVID-19-related anxiety.

A study by Corbett et al. (2020) (24) showed that most pregnant women (83.1%) did not worry about their health status before the pandemic of COVID-19, but during the pandemic, 50.7% were worried about their health status most of the time. Concerns of pregnant women may be related to the fact that they do not have access to their relatives if they needed, and many pregnant women may have concerns about lack of family and social support due to distancing measures (25). In the first days of COVID-19 pandemic in Iran, one hospital in Ahvaz, where a large number of women receive intrapartum care, was designated as the center for patients with COVID-19 infection. Although another hospital was later redeveloped to care for pregnant women, the change in location of care may have contributed to women’s symptoms of anxiety.

Limitations of the study

Women were recruited non-randomly in this study, which may limit the generalizability of the study. Also, we may not reach a representative sample, because we recruited only women who had social media. Furthermore, a past history of depression or anxiety, and levels of social support were not assessed in the present study and all of these have the potential to contribute to health anxiety.

At the time of COVID-19 pandemic, women in the second and third trimester of pregnancy were more worried about the consequences of disease, but the mean scores of health anxiety was significantly higher in the third trimester of pregnancy. Healthcare providers should pay more attention to the mental health of pregnant women and provide more psychological support to them in times of crises such as the COVID-19 pandemic. Also, further studies about specific causes of women’s anxiety and identifying supportive mechanisms during COVID-19 pandemic are needed.

Ethics approval and consent to participate: This study was approved by the Ethics Committee of Ahvaz Jundishapur University of Medical Sciences (Ref No: IR.AJUMS.REC.1399.006). The oral and written informed consent was obtained from each participant.

Availability of data and materials: Data will be available upon the request from corresponding author.

Competing interests: Authors declare that they do not have any conflict of interest.

Funding: All expenses of this research were provided by Ahvaz Jundishapur University of Medical Sciences, Ahvaz, Iran. The funder did not have any role in design, data collection, data analysis, data interpretation and writing of the manuscript.

This study was a research project financially supported by the Ahvaz Jundishapur University of Medical Sciences, Ahvaz, Iran. The funder did not play any role in design, data collection, data analyzing and data interpretation. We would like to thank all women who participated in this research.