Epidemiological scenario of leprosy in a province in China: long delay in diagnosis and high rate of deformity.

Background: This epidemiological study aimed to analyze both the distribution and the characteristics of leprosy in an endemic province in the Chinese Northwest.

Methods: The medical records of leprosy in the province of Shaanxi, China, 1998-2018 were collected from the leprosy management information system in China (LEPMIS). Epidemiological variables were analyzed in this study.

Conclusion: The epidemiological study showed that the characteristics of the new leprosy cases in our province were still long delay in diagnosis and high rate of deformity, which indicated the need of actions of stimulating early diagnosis and treatment, and strengthening the detection of leprosy in low prevalent areas.

Leprosy, which is caused by mycobacterium leprae, is a chronic infectious disease[1], and it mainly induces injuries of skin and peripheral nerves. It is prevalent worldwide, and the prevalence of leprosy in China has a history of more than 2,000 years. Although there is no vaccine, there is effective treatment for leprosy, especially when diagnosed early. At the same time, the global leprosy prevention and treatment strategy has not undergone major adjustments[2] and the focus is still on early detection of cases and timely regular combined chemotherapy[3]. The long disease course, high deformity rate[4], and other medical problems may cause a series of social problems, such as low quality of life and low happiness index caused by discrimination[5]. Since the founding of the People’s Republic of China in 1949, our government has carried out a great deal of public health work[6] and taken a large number of effective measures of prevention and control[7]. Measures include early detection of socially active leprosy patients, timely administration of Multidrug Therapy (MDT), cutting off the transmission of leprosy, and control of the epidemic of leprosy to the maximum extent possible[8].

By 2018, the incidence rate of leprosy in Shaanxi province, China had been kept below 1/100,000 population which is the definition of leprosy basically elimination used in China[9]. However, there are still sporadic new cases. As an important part of the Silk Road Economic Belt and the 21st-Century Maritime Silk Road (B&R), our province covers a total area of 205,800 square kilometers and has a resident population of 38.64 million (December, 2018). Due to different regional and population distribution, in order to explore the epidemic trend and characteristics of leprosy in this province, we retrospectively reviewed the leprosy cases between 1998 to 2018, and tried to provided basis for effective prevention and control of leprosy in low epidemic situation.

The diagnoses of new and recurrent leprosy were based on Leprosy Prevention Manual for Primary Care Physicians (PCPs) and Leprosy Diagnosis Standard WS291-2018[10]. Recurrent case was defined as a patient who has completed a prescribed course of treatment, has no ongoing symptoms, and has clinical, bacterial, or histopathological evidence of disease reactivity after achieving clinical cure (clinical inactivity)[10]. Cases were classified as having MB or PB (paucibacillary) leprosy according to the degree of skin-smear positivity[11]. Disability classification was bases on the Disability Classification Standard for Leprosy, WHO, 1998[12]. In 1988, the WHO Expert Committee on leprosy substantially simplified the disability grading system into a three-grade (0,1 and 2) system of classification [13]. And in 1998, the Committee endorsed this grading with the amendment that lagophthalmos, iridocyclitis and corneal opacities be considered as grade 2[12].

All leprosy cases (including new, recurrent and prevalent cases) were collected from the Leprosy Prevention and Control Management Information System in China (LEPMIS). LEPMIS was designed by the Chinese government in 2010, which is characterized by reporting information not only on newly discovered patients and those undergoing treatment, but also on those who have been cured, in order to achieve lifelong management and follow-up of patients, thus forming a detailed and comprehensive database. As for information, it not only requires related information of disease discovery and diagnosis, but also information of all aspects of leprosy system management. In terms of medical record management, it is not only case management of patients, but also effective monitoring and management of patients and their close contacts. In addition, the data of 1998-2009 leprosy patients were collected in paper files in every year before 2010, and were uploaded to LEPMIS in 2010. Administrate regions in China are divided into four levels: province, region, county, and village. In Shaanxi province, there were 11 regions in 2018 (i.e. Xi’an region). 72 counties and 30 districts belong to these regions. County and district administrative levels are the same. Population data came from the Shaanxi Statistical Yearbook[14].

3.1 The overall situation and changing trend 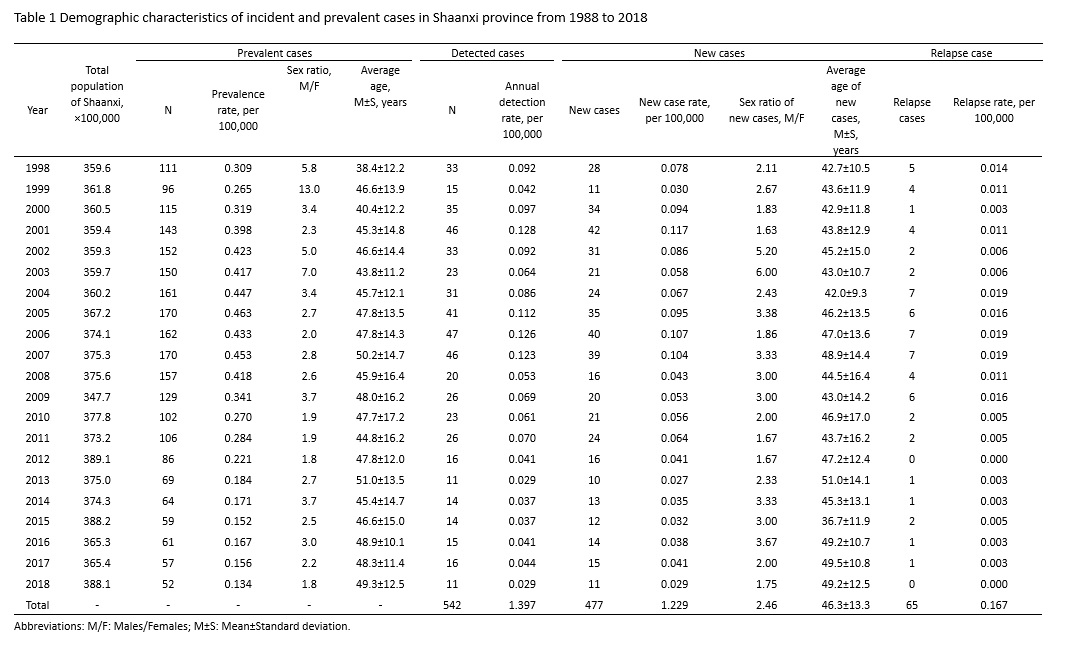 542 new and recurrent cases belong to the local residents, and in 2018, 10 counties or districts in Shaanxi had newly diagnosed cases. By 2018, 28 counties or districts had existing cases, which mainly distributed in southern Shaanxi, including Hanzhong, Ankang, and Shangluo. Leprosy scattered in Guanzhong, and no cases were found in northern Shaanxi for many years (Fig 1). By the end of 2018, there is still one county (Yangxian county) in Shaanxi that has not reached the basic leprosy elimination index (1/100,000) stipulated by the Ministry of Health[9], China, and the prevalence rate of Yangxian county was 1.29/100,000 population.

3.4 Types of cases and disability

Between 1925 and 2018, 11,789 leprosy patients were diagnosed in Shaanxi province, 10,270 cases have been cured, and 502 patients relapsed (data from LEPMIS). The prevalence rates of leprosy in over 95% of regions, counties, or districts in Shaanxi were controlled below 1/100,000 population, reaching our national target of basically eliminating leprosy. According to data above, 477 new diagnosed leprosy cases and 65 relapsed patients were found in Shaanxi between 1998 and 2018, 542 cases in total. The annual detection rate dropped from 0.092/100,000 population in 1998 to 0.029/100,000 population in 2018. The detection rate and prevalence rate of leprosy showed an impressively significant downward trend over the past 20 years, which indicated that we have achieved good results in the prevention and control of leprosy.

In 477 newly diagnosed patients, the male-female ratio is 2.46:1, which was basically consistent with previous reports in some other areas in China[15, 16]. This result was consistent with previous results conducted in other regions of our country[17]. Male patients still accounted for a relatively high proportion of the new diagnosed cases in each year, which may be related to different genetic susceptibility in different genders[18]. However, this ratio in China was different from that in some other countries of the world[19]. That may be because females got more skin consultations than males, and males may be more easily exposed to leprosy bacilli related to behavioral and cultural factors[20]. Culture, life, and genetic differences between races may be related to this difference, but to date, no studies have been published on this, and it would have been interesting to explore this aspect.

The average age of the newly detected was 45.2 years old, which changed little in different years. In terms of newly diagnosed cases, the age distribution in different years were similar. However, the average age of prevalent cases was getting higher[21]. The Leprosy Control Handbook[22]  mentioned that it is generally believed that the average age of patients tends to rise as the incidence of leprosy declined (the prevalence of leprosy is controlled). This was also an evidence for the relatively low epidemic situation of leprosy in Shaanxi. However, this may also be related to the long delay period in diagnosis[23], suggesting that the ability to detect new leprosy patients in Shaanxi still needed improvement. In terms of current leprosy cases, the average age during 21 years was relatively high, which may be related to the large number of MB leprosy cases in our province and the long MDT course. Disability degree is an indicator of the ability to diagnose and monitor leprosy of health service departments, and patients classified as grade 1 or grade 2 disability were related to delayed diagnosis or monitoring failure[24]. This suggested that we should pay attention to the treatment and rehabilitation of current leprosy cases. From 1998 to 2018, only two children under 15 years old were diagnosed with leprosy, which on one hand may be related to the long incubation period and/or low transmission, on the other hand may be related to the relatively low prevalence in Shaanxi. In terms of regional distribution, leprosy epidemic was mainly in Southern Shaanxi and the Central Shaanxi Plain[25]. These areas above were also areas with high incidence rate of leprosy in history. The source of infection has not been completely and effectively controlled, suggesting that we should continue to improve prevention and control work in these areas.

83.6% of the new cases were MB and 16.4% were PB, with a ratio of 5.1:1, which was higher than related reports in some other regions in China[26], indicating that the number of MB cases was too high and there were potential risks. MB leprosy patients have more severe symptoms, more complications, and need longer period of MDT. In Shaanxi, the proportion of MB patients was relatively higher than other provinces, this resulted in leprosy patients in Shaanxi may have more severe symptoms, more complications, and be cured at an older age on average. However, previous studies showed that the type ratio will rise in the low prevalence area of leprosy[27], which may indicate that leprosy in Shaanxi was in a low epidemic state and under effective control. The type ratio of newly detected cases between 1998 and 2018 was relatively high (83.7%). The grade 2 disability rate of new cases in Shaanxi between 1998 and 2018 was about 31.0%, which may be related to the longer delay in diagnosis and less newly detected cases. The average delay period of newly diagnosed patients was 46 months, which was much higher than that reported in relevant literatures in some other areas in China, such as Guangdong province[21], indicating that leprosy cases in Shaanxi took a longer time from onset to diagnosis. This situation may be related to latent symptoms and atypical clinical manifestations in the early stage, low attention to patients, and lack of primary prevention and treatment experience, etc.[28], suggesting that our province should further carry out leprosy monitoring and strengthen the ability of early detection and diagnosis.

Although the leprosy prevention and control in Shaanxi has achieved remarkable results and the leprosy epidemic has been at a relatively low level for a long time, the prevalence of leprosy was still relatively high in some areas, and the incidence of disability in new leprosy patients was still high in some counties. The delay period in diagnosis still needed improvement. To achieve the goal of eliminating the damage caused by leprosy, we should further strengthen the detection ability and the treatment management of leprosy cases, and focus on how to shorten the period between symptom onset and diagnosis and reduce the rate of leprosy disability.

6.1 Ethics approval and consent to participate: This retrospective study was reviewed and approved by the institutional ethics committee of Shaanxi Provincial Institute for Endemic Disease Control (DF2019102001).

6.2 Consent for publication: All authors (G Li, QP Zhang, P Chen, ZX Lin, and C Li) have approved this manuscript for submission and publication on your journal.

6.3 Availability of data and material: The data that support the findings of this study are available from Health Commission of Shaanxi Province; however, restrictions apply regarding the availability of these data, which were used under a license for the current study, and the data are not publicly available. However, data are available from the authors upon reasonable request and with permission of the Health Commission of Shaanxi Province. Please contact the corresponding author: C Li: [email protected]

6.6 Authors' contributions: QP Zhang and C Li led the study, P Chen, ZX Lin and G Li led their respective provincial teams and collected the data. G Li and C Li analyzed the data, contributed to the conceptualization of the study, as well as the interpretation of results, and reviewed drafts of the paper. All authors have read and approved the final version of the manuscript.

6.7 Acknowledgements: We would like to acknowledge Health Commission of Shaanxi Province, Shaanxi Provincial Institute for Endemic Disease Control, and Department of Xijing Hospital of the Fourth Military Medical University for their support in this program of research.