Methods We analyzed 1412 and 582 varus knees from cross-sectional and longitudinal Osteoarthritis Initiative datasets, respectively. BML scores were semi-quantitatively analysed with the MRI Osteoarthritis Knee Score for 4 subchondral regions (median and lateral femorotibial, medial and lateral patellofemoral) and subspinous region. Weight-bearing and non-weight-bearing pain scores were derived from WOMAC pain items. Correlation and negative binomial regression models were used for analysis of associations between the BML scores and pain at baseline, and changes in the BML scores and changes in pain after 24-month follow up.

Subjects were selected from the OAI, a publicly available multi-center, longitudinal, prospective observational study of knee OA (https://nda.nih.gov/oai). The OAI provides access to the data and images from the OAI longitudinal cohort study and includes data of MRI and radiographic images, and Western Ontario and McMaster Universities Osteoarthritis Index (WOMAC) questionnaires [9]. Figure 1 shows a flowchart of participant selection. Of the 4796 participants enrolled in the OAI study, varus knee OA with BML score information of the MRI Osteoarthritis Knee Score (MOAKS) [10], WOMAC questionnaires, femoro-tibial angle (FTA) and body mass index (BMI) were selected. For subjects with bilateral symptomatic knee OA, one knee was randomly selected using random number generator. We analyzed data from 1412 and 582 knees in the cross-sectional and longitudinal OAI datasets, respectively.

We used score data from MRI Osteoarthritis Knee Score (MOAKS) at baseline and 24-month follow up as knee MRI grading. Intra or inter-rater reliabilities for subchondral BML score data used in this study were very good to excellent (weighted kappa=0.76-1.00, 0.76-0.96, respectively) [10]. For subjects who had multiple score data on the same MRI imaging, the median value was used for this study. In MOAKS, subchondral BMLs were scored in each of the 15 anatomical locations according to percentage of the volume of each BML including volume of any associated cysts as; 0 = none, 1 < 33%, 2 = 33-66%, 3 > 66% using the sagittal 3D double-echo steady-state image [10]. In BML scoring for this study, the 15 anatomical locations were integrated into 4 subchondral regions (medial and lateral femorotibial, medial and lateral patellofemoral) and subspinous region (Figure 2). Articular cartilage, osteophytes, Hoffa’s synovitis, effusion, medial meniscus extrusion and anterior cruciate ligament tears were scored based on MOAKS (supplemental text) [10]. We used the BML scores in the 5 anatomical regions, total cartilage score (0-42), total osteophyte score (0-32), Hoffa’s synovitis score (0-3), effusion-synovitis score (0-3), medial meniscus extrusion (0-3), and anterior cruciate ligament tears (absent or present).

Knee pain was assessed at baseline and 24-month follow up using the WOMAC questionnaires. A recent factor analysis of the five WOMAC pain questions suggested that there are two constructs within the five questions [11]. Based on the result, we defined weight-bearing pain as the sum of three WOMAC questions (pain on climbing stairs, on walking, and on standing) and non-weight-bearing pain as the sum of two WOMAC questions (pain in bed and when sitting or lying). The time points of interest for cross-sectional and longitudinal study were the baseline visit, and baseline and 24-month follow up visits.

The participant characteristics in this cross-sectional and longitudinal study are shown in Table 1. 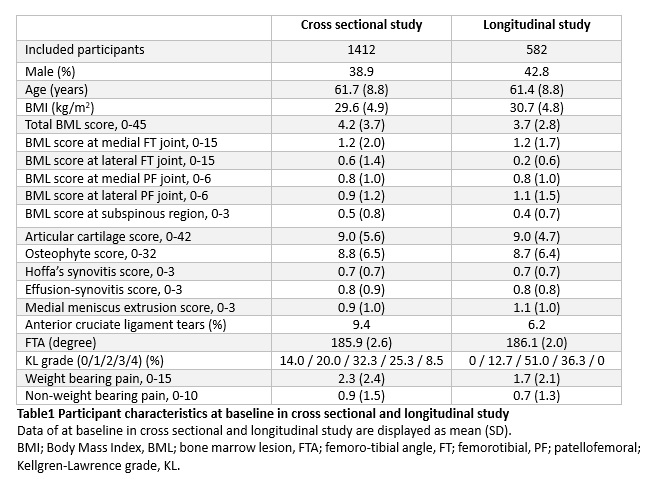 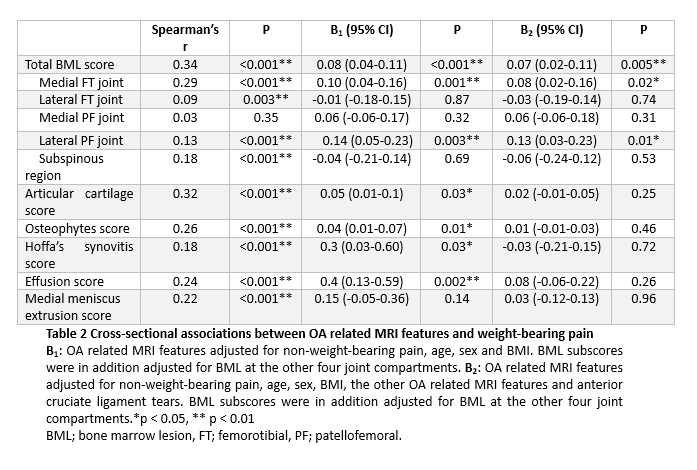 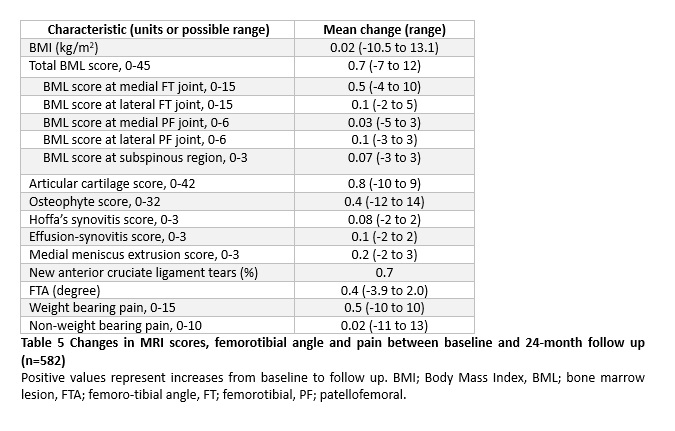 Subchondral BMLs represent regions of subchondral bone characterized as displaying increased bone turnover, and expression of factors, including pro-inflammatory cytokines, that can increase nerve sensitization [5]. We previously showed that nerve growth factor expression within osteochondral channels, and subchondral osteoclast density, each is associated with knee OA pain [12], and calcitonin gene-related peptide immunoreactive sensory nerves within osteochondral channels are associated with pain in human and rat knee OA [15]. Activation of sensory nerves in subchondral bone might contribute to weight-bearing pain in knee OA. Subchondral BMLs might be an imaging biomarker for pathology which sensitises subchondral nerves, and therefore increases weight-bearing pain in knee OA. Further investigation is needed to clarify the cellular and molecular factors which might mediate the observed association between subchondral BMLs and weight-bearing pain.

Subchondral BMLs are also found in healthy pain-free young-middle aged adults, with a prevalence of 13-17 % [19, 29, 30], which is less than that in symptomatic knee OA. Previous study using animal OA models reported that the first sign of change in the development of OA was subchondral BML which preceded cartilage degeneration [31]. These findings suggest that subchondral BMLs may be involved in the pathogenesis of knee OA before it becomes clinically apparent.

Our study has several potential limitations. We investigated only 2 time points (baseline and 24 months). A previous study using OAI dataset demonstrated that changes in total subchondral BML volume after 24 months were positively associated with changes in knee pain severity [3]. However, multiple assessments with shorter intervals are needed to evaluate how fluctuations of subchondral BML size relate to changes in weight-bearing pain. Subchondral BML size was assessed semi-quantitatively and, although our study had a large sample size, quantitative BML measurements might have provided additional information. Direct measurement of mechanical loading through joint compartments was not possible in the current study, and interventional studies would be required to confirm our conclusions that subchondral BMLs are biomarkers for pathology which causes biomechanically-induced nociceptive pain.

This study was supported by a grant from Versus Arthritis (Centre initiative grant number 20777).

The remaining authors have no conflicts of interest to declare.

We would like to thank the OAI participants and Coordinating Center for their work in generating the clinical and radiological data of the OAI cohort and for making them publicly available.

The OAI study was approved by the Institutional Review Board of the University of California, San Francisco, and its affiliates. All participants gave written informed consent.

The datasets analysed during this study are available from the Osteoarthritis Initiative website (https://nda.nih.gov/oai/).

All authors agreed to the publication of this manuscript.