Backgrounds: The ratio of gamma-glutamyl transferase (GGT) to alanine aminotransferase (ALT) is a predictive biomarker for hepatitis and hepatocellular carcinoma (HCC). In this study, the relationship between GGT/ALT ratio and vascular invasion was explored in hepatitis B virus (HBV)-related HCC and tumor prognosis.

Methods: Totally 558 patients were involved in this study. Univariate and multivariate logistic analysis were used to evaluate GGT/ALT as the risk factor of vascular invasion. Prognostic value of GGT/ALT was investigated by univariate and multivariate Cox analysis combined with Kaplan Meier curves. In order to reduce confounding bias, subgroup analysis and propensity score matching (PSM) were performed.

In 2018, liver cancer was ranked as sixth most common cancer and fourth leading cause of cancer-related death in the world, with 841,000 new cases and 782,000 deaths each year[1], among which 85 ~ 90% cases belongs to hepatocellular carcinoma (HCC). Hepatitis B virus (HBV) is one of the major risk factors associated with HCC worldwide especially in China[2].

At present, the treatment of HCC mainly involves chemotherapy, surgical resection and liver transplantation[3]. However, high rates of metastasis and recurrence after operation deteriorate the prognosis severely, in this process vascular invasion accounts for the leading cause[4, 5]. Kunutsor et al.[6] demonstrated that the intrahepatic vascular invasion occupied the prevalent cause of post-operative recurrence and cancer-related death in HCC patients. Therefore, accurate and effective assessment of vascular invasion before surgery is strongly needed to guide the treatment options.

High GGT/ALT ratio was initially found to be prognostically associated with worse condition and treatment response in viral hepatitis[11, 12]. Further studies also indicated GGT/ALT as a positive predictor of HCC [13, 14]. However, those previous studies emphasized more on the prediction of hepatitis or HCC, while the prognostic effect of GGT/ALT on vascular invasion in HBV-related HCC is still unknown. Considering the vital role of hepatitis B in vascular invasion of HCC combining with the diagnostic value of GGT/ALT in hepatitis, the aim of our study is to confirm GGT/ALT as the risk factor for vascular invasion, cancer severity and outcomes of HBV-related HCC patients.

After the discharge, patients were followed up regularly every three months for the first three years and every six months thereafter. Serum biomarkers of tumor and hepatitis B were examined periodically, and abdominal contrast-enhanced CT, ultrasound, hepatic arteriogram or invasive examination were performed as needed. Overall survival (OS) was defined as the interval between the date of surgery and death or the last follow-up. Disease-free survival (DFS) was defined as the time interval between the date of surgery and the date of confirmed HCC recurrence or the date of last follow-up. The last follow-up ended on July 31, 2020. The study was approved by the Ethical Committees of Zhongshan Hospital of Fudan University.

The data analysis was performed by R (R Statistical Software, version 4.0.2). The optimal GGT/ALT cut-off value of receiver operating characteristic (ROC) curve was identified by calculating the maximum value of Youden index. Categorical variables were assessed using Pearson chi-square test or Fisher's exact test as appropriate. Logistic regression model was used for univariate and multivariate analysis. Cumulative survival rates were calculated by Kaplan-Meier and compared with the log-rank method. The Cox method was used for univariate and multivariate survival analysis. Subgroup analysis is conducted to compare the heterogeneity of prediction in subgroups. P < 0.05 was considered statistically significant.

Prediction value of GGT/ALT ratio for vascular invasion in HCC

Relationship between GGT/ALT and clinicopathological parameters

Vascular invasion is one of the major factors leading to poor prognosis of HCC, thus influences the treatment effect of resection surgery severely[18]. Therefore, timely and accurate evaluations are pivotal for guiding the therapeutic approaches and improving the survival. As a main etiology of HCC, infection of HBV has been proved as an important causative agent of vascular invasion in HCC patients.

HBV infection leads to multiple pathophysiological alteration including DNA oxidative damage, liver cell necrosis, inflammation responses, cytokine synthesis and release, fibrosis and tumor tumorigenesis[19]. In this process, HBV X protein (HBx) has been found related with the MVI development involved in post-operative recurrence [20, 21]. Yang et al.[10] found that HBV-positive patients were more prone to develop vascular invasion in HCC. In this study, HBV was found to change the intrahepatic microenvironment through the transformer growth factor beta(TGF-β) - miR34a - C-C motif chemokine ligand 22 (CCL22) pathway, thereby promoting the angiogenesis and the development of HCC. In further clinical studies, Lei et al.[9] discovered that preoperative HBV DNA load larger than 104 IU/mL was an independent risk factor for vascular invasion in HBV-related HCC. Wei et al.[22] further summarized that both infection and active replication of HBV were associated with the inflammatory injuries, occurrence of vascular invasion and cancer metastasis in liver cancer. Therefore, the aim of our study is to predict the vascular invasion and outcomes of HCC via the assessment of HBV infection.

Among the examinations, GGT and ALT are adopted most broadly in hepatitis evaluation[23–27]. GGT could mediate the production of ROS, promote cell growth and proliferation[28], and is often elevated in liver diseases such as hepatitis, fibrosis and cancer[24, 29]. ALT is also known as a marker of liver dysfunction and inflammation, which was found associated with recurrence and poor survival of HBV-related HCC[30, 31]. However, the changes of different biomarkers were not equally accompanied with the fluctuation of inflammatory responses, therefore the combination of GGT/ALT exerts better predictive accuracy in hepatitis compared with using alone[32]. Ebiling et al.[11] disclosed that higher GGT/ALT ratio could predict the worse prognosis in chronic hepatitis C. The research of Tarantino et al.[12] further supported this idea by the discoveries that a lower GGT/ALT ratio is an independent predictor of anti-virus therapy response. Consequently, GGT/ALT could reflect the hepatitis level both in primary disease and therapy responses, which made it possible in the prediction of hepatitis-induced HCC.

Yang et al.[14] found the incidence of primary hepatic carcinoma increased markedly when GGT/ALT elevated in chronic hepatitis B patients. Ju et al.[13] furtherly discovered that increased GGT/ALT ratio was closely related to tumor burden in HBV-infected HCC with Child-Pugh A class, including tumor size, vascular invasion, tumor capsule, and poor prognosis. Those studies proved the predictive potential of GGT/ALT not only in hepatitis but also in hepatic carcinoma. Combining the pathological role of HBV infection in vascular invasion thus in HCC progression, and the prediction value of GGT/ALT in both hepatitis B and HCC, we conducted this study to confirm GGT/ALT as an independent predictive factor of vascular invasion and outcomes in HBV-infected HCC.

As mentioned above, GGT/ALT have the ability to predict vascular invasion in HCC. However, different distribution of characteristics among HCC patients increased the heterology and might lead to false positive results. Therefore, sensitivity analysis including subgroup analysis and PSM was conducted. In subgroup analysis, the prediction value of GGT/ALT was examined effectively in most subgroups. The insignificant predictive value in other subgroups might be attributed to relatively small amount of cases and this could be confirmed through larger database in future. Moreover, PSM was employed to balance the distributions of variables between high and low GGT/ALT groups. After the matching, GGT/ALT was still listed as an independently risk factor of vascular invasion, which proved its prediction value of the ratio solidly.

By now, there is no authoritative explanation for the prediction value of GGT/ALT. One possible hypothesis is proposed as follows: GGT is affected by both inflammation and tumors, while ALT is more responsive to the hepatic inflammation and liver functions relatively. Although the hepatitis in HCC patients has often been controlled before the resection, GGT and ALT might still be interfered by residual HBV infection or surgical stimulus. Therefore, the ratio of GGT/ALT could reflect the stages of primary tumor progression more precisely by minimizing the interference of inflammation. Besides, decreased ALT also indicated increment mortality rate in people aged over 60 years because of the depletion of liver function reserve, which could explain the positive correlation between GGT/ALT ratio and worse prognosis in another aspect[33].

Some scoring systems, such as BCLC classification or ALBI grade, have also exhibited good predicting values in HCC. However, those scoring system is relatively difficult to address, which make it limited in clinical use. As a powerful complement to imaging examination and scoring systems, our study provided a simple and feasible monitoring tool to assess the vascular invasion and outcome of HCC, which make it easier in the patients’ management.

This study still had several limitations. Firstly, this study only involves a single center. More cases from different centers and regions are required in the future. Secondly, this study is a retrospective study, which may lead to selection bias. It may be further verified by prospective cohort studies in the future.

Our study proposed a relatively reliable evidence in proving the prognostic value of GGT/ALT. As a cheap and convenient biomarker, GGT/ALT is an independent predictor of vascular invasion, tumor severity and outcome in HBV-related HCC patients undergoing resection surgery.

The experimental protocol was established, according to the ethical guidelines of the Helsinki Declaration and was approved by the Fudan University affiliated Zhongshan Hospital Ethics Committee. Informed consent was waived for this non-interventional, observational, and retrospective study by the Ethics Committees, in which the patient data used were kept strictly confidential.

The datasets generated and analysed during the current study are not publicly available as the data are being used in next study, but are available from the corresponding author on reasonable request.

The funding body had no role in the design of the study and collection, analysis, interpretation of data or preparation of the manuscript.

We are thankful to Manghua Xu, Tao Qin, Jian Li and Dengyu Wang for provding excellent research condition and guidance. 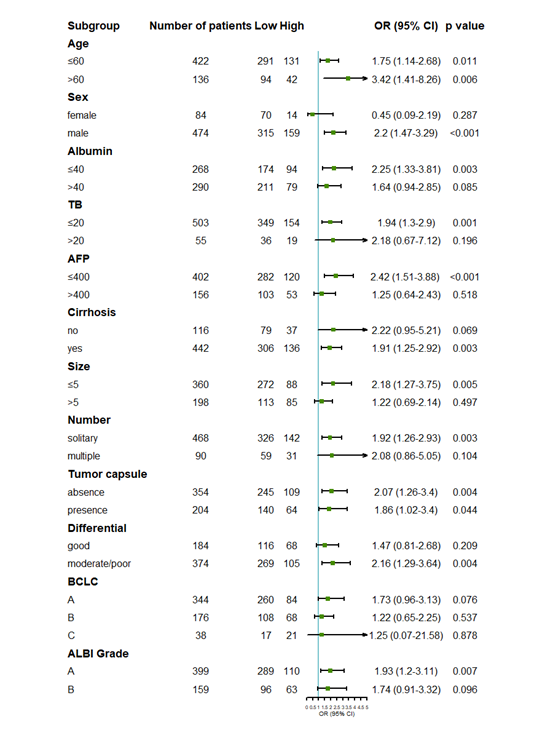 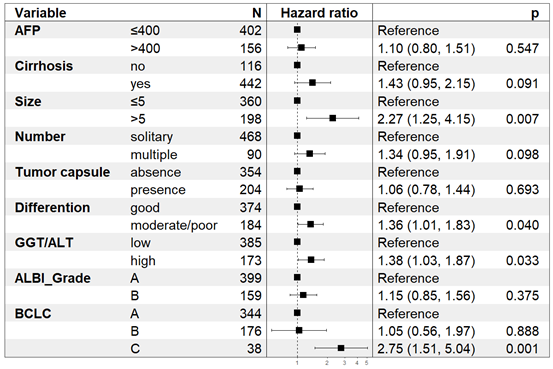 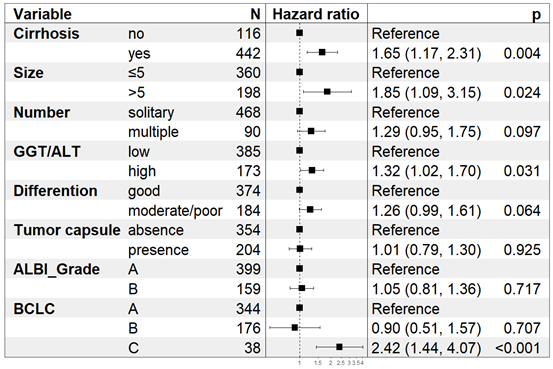 Table 6 Absolute standardized differences before and after propensity score matching