Read the published version in Journal of Ovarian Research  →

Introduction: Sickle cell disease is the most common monogenetic disorder worldwide. There have been reports of endocrine dysfunction and gonadal failure among affected individuals, especially in males. The findings on ovarian reserve and failure in women with sickle anaemia has been inconsistent.

Aim and objective: The aim of this study was to determine and compare the ovarian reserve of Nigerian women with and without sickle cell anaemia attending a University Teaching Hospital.

Study Design: This cross-sectional study was carried out at the Adult Sickle Cell Clinic and the Community Health Clinic of the Lagos University Teaching Hospital.

Methodology: A total of 166 participants who met the selection criteria, were recruited for the study. The study population consisted of two groups of women matched for age; 83 women with HbSS and 83 women with HbAA. The haemoglobin phenotypes of each participant were determined on alkaline electrophoresis (pH 8.4) before analysis. serum Anti-Mullerian Hormone (AMH) were determined using Enzyme-linked immunosorbent assay (ELISA) method (Calbiotech Inc. USA, Catalog no AM448T).

Results: The mean ± SD serum Anti-Mullerian Hormone (AMH) level in women with HbSS 3.64 ± 0.65 ng/mL was lower than that of women with HbAA 7.35 ±1.19 ng/mL (p < 0.001). Serum AMH negatively correlated with age in both study groups (HbAA and HbSS). Also, a significant negative correlation was found between serum AMH and BMI in women with HbAA.

Conclusion: The study showed diminished ovarian reserve in women with HbSS when compared to age-matched women with HbAA.

In Nigeria, it is estimated that 24% of the population have sickle cell trait,7 making it the country with the largest population of individuals with sickle cell trait worldwide.7 According to Mulumba et al, about 150,000 Nigerian children are born with sickle cell disease annually,5 in contrast to 250 new SCD births per annum in the United kingdom (UK) and 2000 in the United states (US).6,8 Globally, the life expectancy of women with sickle cell anaemia has improved over the last four decades due to multiple medical advancements in care.6 The survival estimates have continued to improve from a median survival of 42–48 years in 1994, to 58 years in 2014.10 It is therefore, not unusual nowadays to have patients with SCA who are 60–70 years old.11

The implication of people with SCA living longer is that they are inclined to develop complications of the disease. Endocrine complications such as thyroid and gonadal dysfunction may lead to gonadal failure/insufficiency in males and females with undesirable effects on their reproductive health.2,5 Gonadal dysfunction inherent to SCA has been described in adults (especially in males), such as hypogonadism, sperm abnormalities, and erectile dysfunction (ED).12 Although the available literature is inconclusive about gonadal failure in females with SCA,11,12 some reproductive issues that have been reported in females with SCA include delayed puberty12 and premature menopause.12 Possible explanations

for endocrine dysfunction in patients with SCA include: increased iron storage secondary to frequent blood transfusions, ischemia due to vaso-occlusive crisis and inflammatory mediators during ischemia.8,9 Assessment of ovarian reserve or function is an indicator of the reproductive potential of women. There are various markers available for assessing the ovarian reserve which include: anti-Mullerian hormone (AMH), basal follicle stimulating hormone (FSH) levels, basal oestradiol (E2), and antral follicle count.14,15 However, serum AMH is considered a novel marker for the assessment of ovarian reserve.2 AMH is a gonad specific member of the transforming growth factor beta (TGF-β) superfamily with a total weight of 140KDa.16,17 It is a dimeric glycoprotein produced by the granulosa cells in the ovary and is usually only seen at the preantral and small antral follicle stages.18 Serum AMH level is usually determined by the number of basal antral follicles,18 and does not exhibit intracycle variability, therefore it can be measured on any day of the menstrual cycle, unlike other biochemical markers such as serum basal FSH and estradiol.18,19

This was an analytical cross-sectional study carried out at the Adult Sickle Cell and Community Health Outpatient Clinic of the Lagos University Teaching Hospital (LUTH), Lagos, Nigeria. Ethical approval was obtained from the Health Research Ethics Committee of the Lagos University Teaching Hospital (ADM/DCST/HREC/AP;4P/2674). A total of 166 eligible women who met the selection criteria were recruited for the study between March 2019 and August 2019. The inclusion criteria included non-pregnant women with confirmed HbAA or HbSS phenotype, aged between 18 years and 45 years, and having regular menstruation at the time of the study. Pregnant or lactating women, women with current or past history of oophorectomy/ovarian surgery, combined oral contraceptive usage, chemotherapy and/or radiation therapy, were excluded from the study. The study population consisted of two age matched groups based on the haemoglobin phenotype. A total of 83 women with HbSS and 83 women with HbAA were selected for the study.

After obtaining informed written consent, the subjects’ weight and height were measured using a portable stadiometer with movable head piece mounted on balanced beam scale (FM -S120 Fullmedia China). Thereafter, five milliliters of venous blood were collected from each participant using sterile needles through venipuncture after disinfection of the antecubital fossa with 70% alcohol. Two milliliters of the blood were transferred into EDTA bottles for haemoglobin electrophoresis at alkaline pH (8.4) using the electrophoresis machine (DY 300, Hunan, China), while the remaining 3ml was collected in Serum Separator Tubes (SST) for AMH assay.

The specimen bottles were labelled with the unique identification number and transported via cold chain to the LUTH Central Research Laboratory. The haemoglobin phenotype of all study participants was confirmed before assessing their ovarian reserve. The specimen for AMH assay was allowed to clot at room temperature for 20 minute and centrifuged at 3500 rpm for 10 minutes using Eppendorf 5415C centrifuge (Eppendorf AG, Germany). The serum was collected in 2mL sterile cryovials and stored at -800C until analysis.

23.0. Armonk, NY: IBM Corp. The categorical variables were summarized and presented as frequency distribution tables. The test of normality of continuous variables was performed using the Kolmogorov- Smirnov test. The continuous variables that were normally distributed were presented as mean (± standard deviation), The Student’s independent t- test was used to compare mean of continuous variables such as age, BMI and serum AMH in HbSS and HbAA study participants. Pearson’s correlation coefficient was used to determine the relationship between serum AMH with age and BMI. Simple and multivariable linear regression were used to assess the predictors of serum AMH using age and BMI of the study participants as covariates. The level of significance was set at P < 0.05, power of 0.80, normal distribution, equal sample size in both groups. 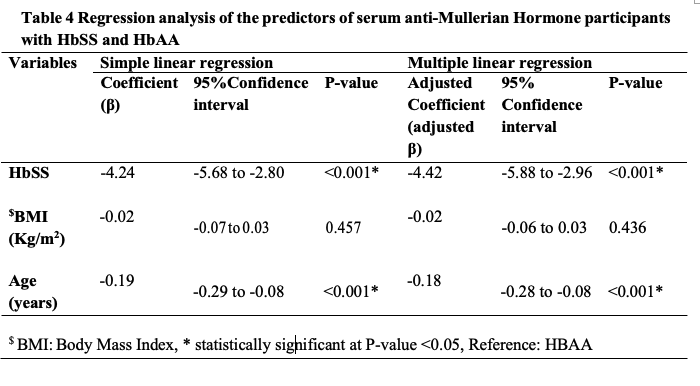 This study aimed to determine and compare the ovarian reserve among Nigerian women with HbSS and those with HbAA, using serum AMH as a marker, in order to document the impact of haemoglopinothies on the reproductive health of affected women. The exhaustive literature search suggest that this is the first and larger study to utilize serum AMH to evaluate ovarian reserve among HbSS women within the age range of 18–45 years in Nigeria and SubSaharan Africa to the best of my knowledge.

This study found that the mean serum levels of AMH among women with HbSS was significantly lower than the mean serum AMH levels among women with HbAA. This result is in agreement with the findings by Kopeika et al in United Kingdom,20 that reported a mean AMH of 7.6 pmol/L (1.06 ng/mL) among HbSS participants as compared to a value of 13.4 pmol/L (1.88 ng/mL) among HbAA participants. The similarity in our study and that of Kopeika et al may be explained by the fact that both studies recruited participants with similar characteristics and restricted the age limit of study participants to the reproductive age group. In contrast, Ibrahim and co-workers reported no significant differences in mean concentration of serum AMH between sickle cell disease participants and non-sickle cell disease participants.2 The study by Ibrahim et al recruited participants between the ages of 2 years and 38 years. The inclusion of the pre- pubertal participants could have significant impact on their findings as serum AMH levels are low in children and adolescent girls.14

In this study, there was a statistically significant difference in the mean BMI of the two groups of participants. The observed difference in BMI is likely due to the haemoglobinopathy and its long-term effect on growth and development. Although a negative correlation was observed between AMH and BMI in the HbAA, the study found no correlation between serum AMH level and BMI among the HbSS study participants. The latter is similar to findings in previous studies by Zahra et al,23 and Buyuk et al.24 which showed no significant linear relationship between BMI and serum AMH levels in women of reproductive- age group. The possible explanation for this finding may be the higher proportion (90.4% versus 60.0%)) of HbSS study participants to HbAA study participants who had low or normal BMI at enrollment.

All the participants from both groups in this study were of African race, but from different ethnic backgrounds in Nigeria. The predominant ethnic group of our participants was Yoruba. The strength of this study includes: cross-sectional study involving a large population of women sickle cell anaemia within the reproductive age-group.

Limitations of the Study

Firstly, the study was hospital-based therefore the finding may not be a true representation of the general public but has enough power to make generalization. Secondly. the possibility of primary ovarian insufficiency/premature ovarian failure cannot be completely excluded as serum oestrogen and serum pituitary gonadotropins (FSH and LH) were not assayed. However, all study participants were still having regular menstruation at the time of enrolment into the study. Also, the antral follicular count, serum FSH and inhibin B were not measured and the subjects were not fully evaluated for polycystic ovarian syndrome, a disorder associated with abnormally high serum AMH. However, attempt was made at recruitment to exclude women with menstrual disorders, using the screening form.

Women living with Sickle cell anaemia may be at risk of diminished ovarian reserve and by extension, reduced reproductive ability.

Ethical approval and consent to participate

The study was approved by the Health Research Ethics Committee of the Lagos University Teaching Hospital (ADM/DCST/HREC/AP;4P/2674) and an informed written consent was obtained from each of the study participant before enrollment into the study.

The data that support the findings of this study are available from SRG but restrictions apply to the availability of these data, which were used under license for the current study, and so are not publicly available. Data are however available from the authors upon reasonable request and with permission of CCM.

The study was funded by the researchers.

Read the published version in Journal of Ovarian Research  →