Methods-From August 1, 2017 and September 1, 2019, 493 consecutive patients with AIS were prospectively enrolled in this cohort. 170 patients received thrombolytic therapy and 323 patients did not have thrombolysis. Clinical evaluation, laboratory data before and after thrombolysis and 3-month modified Rankin scale (mRS) scores were compared. Neutrophil-to-lymphocyte ratio (NLR), which represents inflammatory response, was divided into quartiles for comparison. Multivariate regression analysis was used to determine independent factors of 3-month prognosis. The receiver operating characteristic curve was used to evaluate the predictability of NLR for good prognosis that was defined as 3-month mRS scores < 3.

Stroke is a multifactorial disease with high morbidity and mortality(1, 2). Thrombolytic therapy is an effective method in the treatment of acute ischemic stroke. Thrombolytic therapy can improve not only the prognosis by timely opening up the blood vessel blockage, but also the perfusion to the ischemic penumbra. Inflammation is one of the mechanisms of cerebral infarction, which can promote the formation of early atherosclerosis(3), change blood vessel pathology(4) and regulate blood flow dynamics in ischemia and reperfusion(5, 6), and affect the prognosis of the disease(3, 7).

Neutrophil-to-lymphocyte ratio (NLR) is an easily acquired, non-invasive, and inexpensive marker, which can be used routinely to indicate systematic inflammatory status in clinical work that has been studied as a predictor of bacterial infection, showing a superior predictive value than those of conventional inflammatory markers. In addition, the NLR has displayed good predictive power for pneumonia(8), as well as dose-response information relating to the burden of community-acquired pneumonia(8, 9). NLR has been demonstrated to predict the prognosis in cerebral infarction and cerebral hemorrhage(10–12). NLR before thrombolysis has been proved to be associated with post-thrombolytic functional outcome(13, 14). The effect of thrombolysis on the inflammatory response of patients with stroke is little investigated. We assume that the thrombolytic therapy has a direct effect on the inflammatory response of patients with cerebral infarction, and then the prognosis is affected by the inflammation.

In our single-center prospective cohort study, we aim to study the relationship between thrombolysis and inflammation and their impact on AIS prognosis.

Consecutive patients with AIS were screened and selected from our Acute Ischemic Stroke Registry Program in Shanghai Fifth People’s Hospital (The Fifth People’s Hospital of Shanghai, Fudan university) between August 1, 2017 and September 1, 2019. All included patients were followed up in outpatients to get their mRS scores at 3 months except those who died or reoccurred in this period. Patients were included if they met the following criteria: (1) diagnosed with AIS within 24 hours of onset; (2) aged 18 years or older; and (3) completed a head magnetic resonance imaging (MRI) in 48 hours. AIS was diagnosed if there were new focal neurological deficits explained by relevant lesions detected on head diffusion-weighted imaging (DWI). Patients were excluded if they met the following criteria: (1) patients with previous AIS or current cerebral hemorrhage; (2) pregnant patients; (3) severe heart (with cardiac function in grade Ⅲ or Ⅳ according to New York Heart Association or left ventricular ejection fraction < 40% in echocardiography), lung (with blood oxygen saturation less than 95% and symptoms of shortness of breath, cyanosis, and abnormal blood gas analysis), liver (serum alanine aminotransferase levels > 10-fold upper limit of reference interval), kidney (serum creatinine > 443 µmol/L) and neoplastic diseases; (4) autoimmune diseases; (5) infection symptoms or signs was present at the time of stroke onset. According to the relevant guidelines, if the patients in the cohort meet the criteria of thrombolysis, they will be treated by intravenous alteplase (the dosage = 0. 9 mg/kg × patient’s body weight (kg); 10% of the dosage was injected intravenously within the first minute and 90% dripped intravenously within 1 hour). The inclusion criteria of thrombolysis are as follows: (1) aged within 18 ~ 80; (2) onset of neurological impairment within 4.5 h, head CT or MRI examination excluded bleeding lesions; (3) systolic blood pressure < 180 mmHg or diastolic blood pressure < 110 mmHg before treatment; (4) no hemorrhagic disease and bleeding constitution; (5) patients and their families agree to treatment and sign informed consent. AIS patients with uncertain onset time, suspected subarachnoid hemorrhage, seizures, intracranial aneurysms or arteriovenous malformations or heart, lung, liver, renal insufficiency, or active internal bleeding or arterial puncture treatment within 1 week, surgery within 2 weeks gastrointestinal or systemic hemorrhage within 3 weeks, urological trauma within 3 months or death, or blood glucose < 2.7 mmol/L or > 22.2 mmol/L were excluded for thrombolysis. Figure 1 showed the flow diagram of selecting patients. Written informed consent was obtained from all patients. This study was approved by the Ethical Review Board of Shanghai Fifth People’s Hospital. Baseline data were collected from medical records including age, sex, and history of hypertension, diabetes mellitus (DM), atrial fibrillation (AF), dyslipidemia, NIHSS scores, door-to-needle time (DNT), stroke onset-to-needle time (ONT) (stroke onset-to-second blood sampling time), systolic blood pressure (SBP), history of cigarette smoking, and alcohol drinking.

All blood samples were collected via vacuum tubes, stored at 4 ℃ and tested by clinical laboratory technicians in hospital certificated laboratory within 2 h after collection. White blood count (WBC), neutrophil proportion (N), lymphocyte proportion (L), platelet count (P), serum total bilirubin, serum direct bilirubin, serum glucose, homocysteine (HCY), triglyceride (TG), total cholesterol (TC), high-density lipoprotein (HDL), low-density lipoprotein (LDL) concentrations were measured. Neutrophil-lymphocyte ratio (NLR) was calculated as the ratio of neutrophil counts to lymphocyte counts (N/L). Some laboratory indexes, such as NLR, were collected and calculated after thrombolysis in included patients. Only in patients with thrombolysis the blood samples before thrombolysis medication were collected within 1 h at emergency department. The collection time of blood samples, operated by trained nurses, for patients without thrombolysis was the same as that after thrombolysis (6: 00–7:00 on the second day of admission).

According to inclusion criteria, we selected 450 individuals from the large cohort for preliminary inclusion review, excluding 57 people according to the exclusion criteria, see Fig. 1. Only 2 persons (a male and a female) was lost to follow-up in thrombolysis group, we did not get their mRS.

SPSS 26.0 (IBM Corp., Armonk, NY) and GraphPad Prism 8 (GraphPad Software Inc., La Jolla, CA) were used to perform statistical analysis. Categorical variables were presented as frequency and percentage, and Pearson Chi-square test and Fisher’s exact test were used to compare between these groups. For continuous variables, the Kolmogorov–Smirnov test was used to determine the distribution of data. If the data demonstrated normal distribution, they will be presented with mean ± SD and the Student t test is used for comparison. For data without normal distribution, median and interquartile range are shown and the Mann–Whitney U test is used for comparison. Significance level was set at α = 0.05 (two-tailed). Parameters showing a statistical trend (p < 0.1) or being proved a significant association in previous studies were included in a multivariate model to identify parameters independently associated with functional outcome. The Hosmer–Lemeshow test was used to test the goodness of fit. A receiver operating characteristic (ROC) curve and Youden’s J statistic were used to determine the cutoff value for NLR. Then, patients were dichotomized according to the identified cutoff value of NLR, and 3-month mRS scores of different groups divided by cutoff value of NLR were tested by chi-square test and z test.

Association between NLR and Functional Outcome

According to the best cut-off value of ROC curve, the patients with and without thrombolysis were divided into two groups respectively, high NLR and low NLR group. The proportion of 3-month good prognosis of patients in the two groups was compared as shown in Table 3. We found that the proportion of good prognosis in patients with higher NLR at 3 months was significantly lower than that with low NLR at 3 months (p = 0.006) in thrombolysis patients.

In this single-center prospective cohort study, we found that after thrombolysis the proportion of NLR can significantly increase, and these increased NLR can better predict the 3 months adverse prognosis, suggesting that thrombolysis may enhance inflammatory injury and affect the prognosis.

The underlying mechanism of NLR on stroke is due to a central role of neutrophil in all types of stroke. Circulating neutrophils are the first among various peripheral inflammatory cells to infiltrate the lesion (30 min to a few hours)(16) from the bone marrow and spleen, peak earlier (24–72 h) and decrease rapidly with time. This is associated with stroke severity(17), infarct size(18), and worse functional outcomes(19). In the first 15 minutes of infiltration, neutrophils express endothelial adhesion molecules, P-selection glycoprotein ligand-1, lymphocyte function-associated antigen 1, and macrophage-1 antigen (MAC-1)(20) and in 2 hours they began to roll and adhere to pial vessel of the brain; after 6–8 hours, infiltration has begun(21), and peaked in 24–72 hours(22). Adhesion of neutrophils activate endothelium through adhesion molecules that promote neutrophil-endothelial interactions and neutrophil migration with the results of blood brain barrier (BBB) disruption and brain edema(23). In patients with stroke, the degree of neutrophil accumulation in cerebral ischemia lesions correlates with stroke severity and worse stroke outcome(24).

In contrast to neutrophils, lymphocytes decrease after ischemic stroke(23). Lymphocytes including B and T cells, especially CD4+, CD8 + T cells and γδT cells play important roles in inflammation by producing pro-inflammatory cytokines e.g. interferon-γ and IL-17(25), however Treg cell (CD4 + CD25 + Foxp3 + Treg cell) is benefit for inflammation by releasing anti-inflammatory cytokines such as IL-10 that is neuroprotective via IL-10/JAK/STAT, PI3K, and MAPK pathway(24, 26). NLR levels are elevated because of increased neutrophil counts and downsized lymphocyte counts in the post-stroke stage. Furthermore, elevated NLR levels had detrimental effects on prognosis due to secondary brain injury by neutrophil activation and increased risk of infection by lymphocyte suppression. After success of mechanical thrombectomy for large vessel occlusions, NLR fell for reperfusion of the ischemic lesion(27). And it is reported that NLR decreased in 72 h post successful recanalization(27). However, an elevated neutrophil count was noted an independent predictor of poor outcome (mRS > 3) at 90 days despite TICI 2b/3 recanalization(27). A study has found that higher NLR after thrombolysis is independently associated with symptomatic intracerebral hemorrhages and worse outcome at 3 months(11).

Our study found that, after intravenous thrombolysis, the NLR elevated and the elevated NLR was a better predictor of unfavorable prognosis. This suggests that a thrombolysis-mediated inflammatory response is likely to be achieved by raising the neutrophil counts or decreasing the lymphocyte counts. The vascular recanalization caused by thrombolysis promotes the production of more early reactive cells, such as neutrophils, which infiltrate into the ischemic lesion through the disrupted blood-brain barrier to damage the ischemic cells. Then these cells are cleared by consuming more lymphocytes, and we named the mechanism as a second hit by inflammatory flood. For patients with successful thrombolysis, this outcome seems inevitable, which is why elevated NLR is widely reported in the heart study to be associated with poor prognosis.

Several limitations exist in the present study. First, our research was a cohort study from a single study center and simply excluded the Chinese population, and thrombolysis patients were not included randomly, which might lead to a lack of forceful convincingness and selection bias. Second, we merely calculated the NLR on admission without dynamic detection and observation, which perhaps affected the association between NLR and progression in patients with AIS. Third, we only used the means of the NIHSS score and mRS score to evaluate the functional outcome. No other scores were used to evaluate the prognosis in all-round way (e.g., advanced cognitive function, body function, etc). Finally, some other inflammatory markers such as TNF- α, IL-1, and IL-6 were not evaluated.

In conclusion, we assumed that thrombolytic therapy can improve NLR levels, and proved the increased NLR can better predict the function outcome at 3 months. This indicates that reperfusion by thrombolysis can lead to second injury in the lesion by increased inflammation.

The authors declare that the research was conducted in the absence of any commercial or financial relationships that could be construed as a potential conflict of interest.

DW and DH proposed the research design. DH, XY analyzed data and DH wrote the article. DW and DH evaluated MRI; disagreement was resolved by consensus with DW. DH and CW were responsible for collecting data. DW, and PZ proofread and reviewed the manuscript. DH polished the final manuscript. 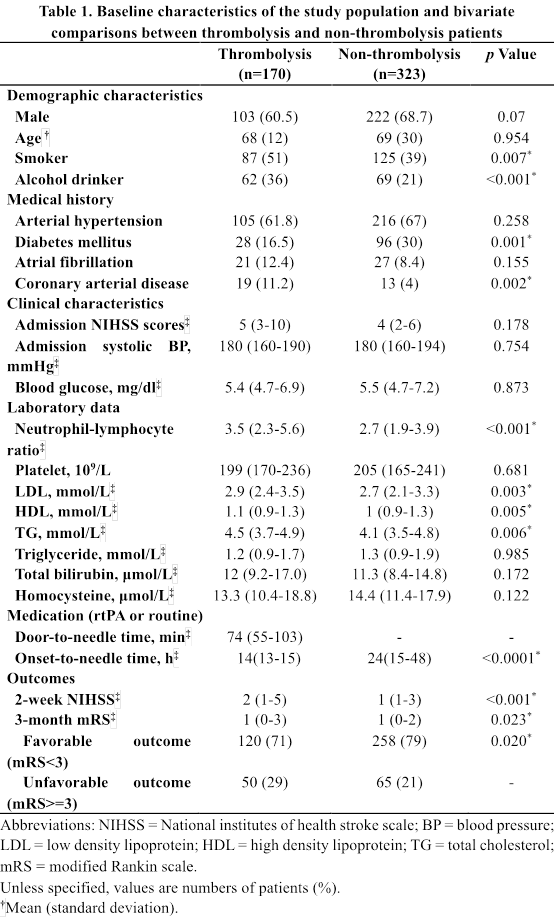 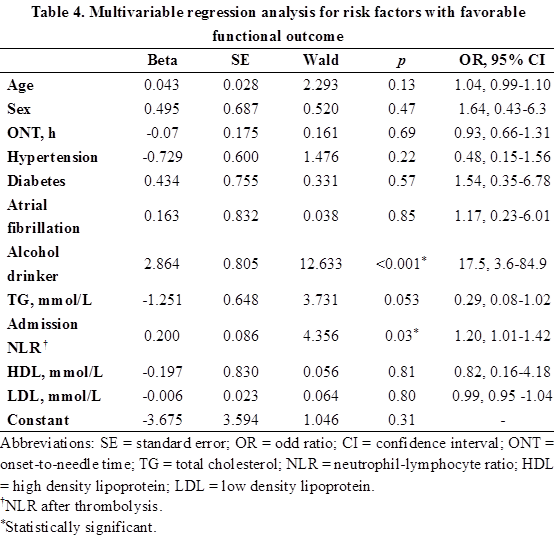