Clinical  analysis of tracheobronchial foreign body aspiration in children: A focus on external and intrinsic factors

Methods: We retrospectively analyzed the clinical data of pediatric patients diagnosed with TFBA and removed foreign body(FBs) by rigid bronchoscopy under general anesthesia at otolaryngeal department from December 2017 to November 2018.

The gender constituent ratio of male(72) to female(53) was 1.4:1. The patients aged from 1 to 3 years accounting for 76% (95/125). Cough, continous fever and dyspnea were premier symptoms. Right primary bronchus was the most common position invovled where FBs were detected by rigid bronchoscopy in 67 cases(53.6%). Organic foreign bodis were commonest in our study. The guardians of patients between rural(parents 16, grandparents 31) and urban(parents 52, grandparents 26) group were significantly different(χ2=12.583, p=0.000). More children were paid attention delayedly over 72 hours in rural group than urban. More children in group of no hsitory of foreign body aspiration(12, 25%) were treated over 72 hours than in the contrary group.

Pediatric tracheobronchial foreign body aspiration is a kind of common emergency in otolaryngology. Age, gender, tracheobronchial anatomy and other physiological elements were defined as intrinsic factors, while guardians, residence, FBs species and prehospital time were defined as external factors of TFBA. External factors would determine the morbidity, and intrinsic factors would determine patient's condition and mortality. It is very important to take effective measures to control external factors, which was expected to decrease morbidity and mortality.

Pediatric tracheobronchial foreign body aspiration (TFBA) is the most hazardous and most common emergency in respiratory tract diseases; it not only initiates infection but also causes obstructive asphyxia or spasmodic asphyxia [1]. The 2008 statistics from the National Safety Council (NSC) revealed that over 17 thousand pediatric patients in the United States presented to the emergency department at younger than 14, and approximately 220 patients eventually died due to TFBA in that year alone[2]. Hence, it is extremely important for patients to see an emergency medicine specialist on time and receive professional treatment if they are considered to be suffering from this kind of disease. However, when and whether children should be taken to the hospital depends on multiple factors relating to guardians, such as economic status, geographical location, education degree and disease cognition. West China is characterized by mountainous areas that have less developed infrastructure and economics than East area. We analyzed the clinical data to judge the external factors and intrinsic factors affecting clinical features of TFBA in this area. The external factors referred to the living environment, and the intrinsic factors referred to physiological factors such as age and tracheobronchial anatomy.

According to clinical symptoms, 114 patients suffered from cough as a major symptom (91.2%), 72 patients suffered from bucking as major discomfort (57.6%), 56 patients suffered from continuous fever (44.8%), 48 children had dyspnea as the most distressing symptom (38.4%), and 46 pediatric patients endured obvious wheezing (36.8%) (Table 1). Regarding the location of the FBs, the right primary bronchus was the most common position involved, with FBs detected by rigid bronchoscopy in 67 cases (53.6%), followed by the left primary bronchus (49/125, 39.2%) and trachea (9/125, 7.2%). The foreign body was successfully removed in 125 cases, and the location of the foreign body was consistent with the preoperative imaging examination (Table 1). Position variance of FBs in 3 cases was observed during operation from the right bronchus to the left bronchus.

When we divided pediatric patients into two groups according to their accompanying history of foreign body aspiration, there was a significant difference between the two groups about when to see a doctor (χ2=11.573, p=0.003). Although most patients in both groups were sent to the pediatric clinic or emergency room within 24 hours, more children in the group without foreign body aspiration (12, 25%) were treated after over 72 hours than in the contrary group (5, 6.5%) (Table 4).

Pediatric TFBA refers to children who suffer from aspiration of a variety of objects by mistake while crying, smiling or yelling. It is very important to turn to specialists for professional aid immediately after aspiration occurs or to avoid it from the very beginning. In our opinion, the occurrence of TFBA was influenced by some external factors and intrinsic factors. Here, we aim to discuss these factors and search for some potentially effective measures corresponding to these factors.

Owing to both the laryngeal protective function and masticatory function development, TFBA usually occurs in infants, especially those less than 3 years old[3]. In our study, the age distribution of pediatric patients was mostly from 1 to 3 years, coinciding with Arias’s findings from the National Center for Health Statistics[4]. In addition, there were 72 boys and 53 girls enrolled in our study, and the male-female ratio was 1.36, similar to that in Maha’s study[5]. As is well known, infants attempt to explore the world with their tongues and mouths, and boys almost always show stronger curiosity and relative hyperactivity than girls in daily life. Therefore, we must emphasize time and again to guardians that infants are not permitted to eat nuts. It is best to put nuts and tiny objects out of children’s sight and reach.

Cough, bucking and having a fever were the three symptoms of highest incidence in our patients, not only because of infection but also because of rejecting reaction. The symptoms mainly depended upon the prehospital duration and the type of FB. Tan et al summarized that nuts and seeds, with some geographic and seasonal variations, were the most common FBs[8]. In our group, most of the FBs were organic objects, such as peanuts, sunflower seeds and walnuts, which produce unsaturated fatty acid and thus promote inflammation of airway mucosa.

Most of western China is mountainous, and rural and urban districts are different in terms of infrastructure and economic conditions. We regard the regional difference as an external factor of TFBA. When the patients were divided into two groups according to their residence, we found that there was a significant difference in the guardians and medical history time but not in the gender of patients or the composition of the types of FBs.

Administering TFBA therapy as soon as possible upon arrival at the hospital is key to timely diagnosis and surgery [9]. However, Foltran et al found that approximately 40% of patients were given delayed diagnosis and treatment [10], and more than 72 hours of prehospital time was considered to potentially increase the risk of complications such as pneumonia, atelectasis, pneumorrhachis, pneumothorax, subcutaneous emphysema and pneumomediastinum[11].

When we focused on medical history time, we found that there were some significant differences between children with or without a history of FB aspiration. A total of 67.5% of pediatric patients with a history of FB aspiration were immediately dealt within 24 hours, while 58.3% of patients who had no explicit medical history were treated after 24 hours. Meanwhile, children living in different districts also showed differences in prehospital time. Although most patients in both groups were taken to the doctor within 24 hours, more children were not treated for over 72 hours in the rural group than in the urban group. Guardians in rural areas were mostly grandparents, who possibly spend inadequate time caring for children and showed a lack of understanding about . Along with distance from medical centers or competent hospitals, the type of guardian is responsible for delayed diagnosis or therapy.

As a result, it is crucial for the guardian to be aware of the danger of TFBA, which could reduce its incidence and prevent medical delay.

Pediatric tracheobronchial foreign body aspiration is a common emergency in otolaryngology. Age, gender, tracheobronchial anatomy and other physiological elements were defined as intrinsic factors, while guardians, residence, type of FB and prehospital time were defined as external factors of TFBA. External factors determine morbidity, and intrinsic factors determine the patient's condition and mortality. It is very important to take effective measures to control external factors, which is expected to decrease morbidity and mortality.

The dataset used and/or analyzed during the current study are available from the corresponding author on reasonable request.

TABLE 1. Demographics and clinical characteristics of the study cohorts 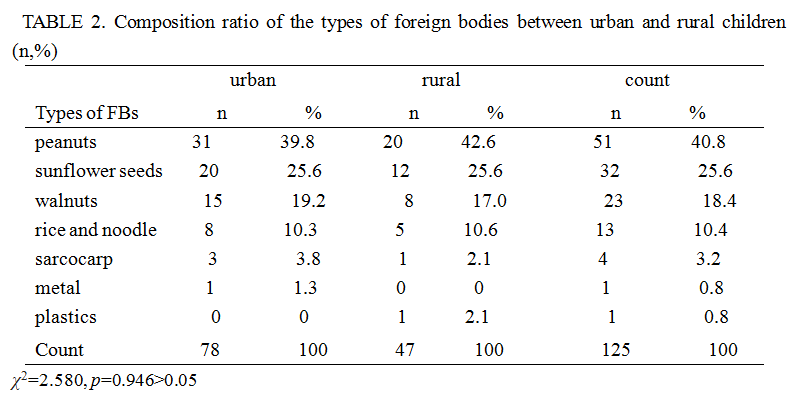