The mean age of the participants was 53.34 ± 9.57 years. Males were 50%. The mean duration of type 2 diabetes in the participants was 6.29 ± 2.78 years. Each index had a strong and significant correlation with fasting plasma insulin (p<0.001). Using AIP as a marker of cardiovascular risk, 14.3% had intermediate/high risk. Among the indices, only McAuley’s index showed a statistically significant negative correlation with AIP (r= -0.453;p<0.001). None of the indices could reliably discriminate between low and intermediate/high cardiovascular risk.

Dynamic indices are derived from glucose tolerance tests and repeated blood sampling which makes them unsuitable for routine day-to-day clinical practice.15 Examples of these are Matsuda’s, Belfiore’s, Avignon’s, Strumvell’s and Gutt’s index.  The basal indices, on the other hand, require one-time sampling, usually fasting, for metabolites such as insulin, glucose and triglyceride.15 Examples of these are the homeostatic mode assessment of insulin resistance (HOMA-IR), quantitative insulin sensitivity check index (QUICKI), fasting glucose insulin ratio (FGIR), fasting insulin resistance index (FIRI), McAuley’s index and Raynauld’s index. The basal indices are suitable for clinical practice but there is paucity of data on which one of them gives optimal information about the cardiovascular risk of individuals living with type 2 diabetes mellitus.

The study involved 70 individuals (35 males and 35 females) previously diagnosed with type 2 diabetes mellitus and who were attending the outpatient diabetes clinic of a major referral hospital in Southern Nigeria. The hospital’s ethical committee gave the ethical approval for the study. Additionally, the participants gave written informed consent before they were allowed to participate in the study. Exclusion criteria were insulin administration, recent acute metabolic decompensation, pregnancy, use of drugs like steroids and anti-psychotic medications and hospital admission in the preceding 3 months.

The data collected were scrutinized for errors as soon as collected. They were coded and entered into Microsoft Excel datasheet before they were transferred for data analysis. Data analysis was carried out using the Statistical Package for Social Sciences software (SPSS) version 22 (IBM, New York, USA). Quantitative variables were presented as mean ± standard deviation (SD). Correlation was done with Pearson’s correlation. Receiver operating characteristic (ROC) analysis was done and the area under curve (AUC) was determined with 95% confidence interval (CI). AUC of 0.5–0.7 and > 0.7 were considered as weak and strong predictors of cardiovascular risk category respectively. P value < 0.5 is considered statistically significant.

TG in mmol/L was converted to mg/dl by multiplying with 88.5 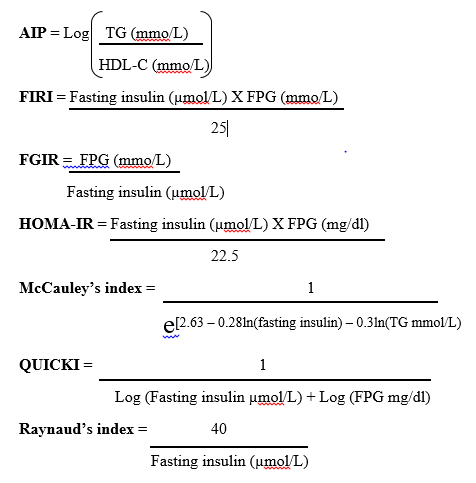 The participants were mostly middle-aged. The onset of type 2 diabetes mellitus usually falls in this age group as reported from previous studies.17,18 This is partly due to the increased prevalence of the risk factors for diabetes such as obesity, hypertension, physical inactivity and dyslipidaemia in this age group.18 Going by the mean FPG and the HbA1c, it can be deduced that the short term and long term glycaemic control are averagely good. The participants were being managed at a tertiary hospital where the best of diabetes care is offered so, attaining good glycaemic control may be unsurprising. Moreover, it can also be assumed that since their anti-diabetic medications required to achieve optimal glycaemic control did not require insulin (an exclusion criterion), the metabolic control must have been within acceptable limit.

Using AIP as a marker of cardiovascular risk, 14.3% of the participants fell within the high/intermediate cardiovascular risk category. This may be explained by their good glycaemic control and the absence of markedly deranged lipid profile. AIP is mainly derived from the mathematical transformation of fasting TG and HDL-C and since this study showed acceptable TG and HDL-C profile, it may be unsurprising that the vast majority of the patients were within the low cardiovascular risk category.10 This present study, being a hospital-based study, may however not reflect what is found in the general population living with diabetes in the community.

Although none of the indices was a strong predictor of cardiovascular risk category yet, QUICKI had the largest AUC which suggests that it had the highest ability to discriminate between individuals with low and intermediate/high cardiovascular risk. It is however worthy of note that this discriminatory power did not attain statistical significance. In a cohort of patients with polycystic ovarian syndrome, Wanderley et al reported an association between some cardiovascular risk factors and QUICKI.23 However, their study was not centred around individuals living with type 2 diabetes mellitus.

The sample size could have been larger to demonstrate the relationship among the variables better. Similarly, a community-based, rather than hospital-based, approach might be a better alternative so as to capture the whole spectrum of diabetic participants in their usual state unlike the vastly well controlled type 2 diabetes patients involved in this study.

This study demonstrated that FIGR, FIRI, HOMA-IR, McAuley’s index, QUICKI and Raynaud’s index correlated strongly with fasting plasma insulin (a validated biomarker of insulin resistance) in a cohort of individuals with type 2 diabetes and may therefore be reliably used to determine insulin resistance in such people. However, none of these indices could reliably discriminate between low and high cardiovascular risk. Newer markers of insulin resistance that can also predict cardiovascular risk would be needed especially in people living with diabetes mellitus.

Ethical approval and consent to participate:

Ethical approval was granted by the ethical committee of the Institute Advanced Medical Research and Training with the reference number NHREC/05/01/2008a. The ethical approval number for the study was UI/EC/17/0284. Also, the recruited participants gave written informed consent to partake in the study.

was taken from all participants.