Background: Stepper movement is popular as a home-based exercise. However, it has not been fully investigated how much energy is consumed during movement. This study aimed to investigate oxygen consumption for stepper movements at different cadence levels and to look into whether there are correlations between stepper movement and treadmill walking.

Methods: Twenty two healthy volunteers (10 males, 12 females, aged between 18 and 40) participated in the study. The participants performed stepper movements and treadmill walking at three different cadences, a self-determined comfortable cadence, a 20% higher and a 20% lower ones than the comfortable one. Their oxygen consumption was measured using Oxycon mobile® system. A set of parameters, e.g. VO2, Metabolic unit, Energy expenditure, etc were obtained. Statistical analysis was carried out to investigate correlations between stepper and treadmill movements in terms of oxygen consumptions.

Results: Strong correlations were found between two types of movements, most of metabolic parameters had correlation coefficients ranged proximately between 0.5 to 0.8, p<0.001. In the conformable cadence level, VO2 for stepper movements was 826.49±56.02 (ml/min) while VO2 for treadmill walking was 787.16±56.02. Usually, stepper movements have oxygen consumption similar to or slightly higher than that in treadmill walking.

In rehabilitation, through different people select different exercise [1, 3, 8], both stepper and treadmill machines are popular [5, 6]. Stepper machine is easy to use, much less expensive, occupies less area, and no guidance is needed for its use as compared to the treadmill. As the home exercising machine, a stepper seems to be better than treadmill.

Stepper machine has various functions. It helps rehabilitation by stimulating the movement of ascending steps [21]. Steppers have a very strong impact on gluteal muscles, legs and lower back. It is an apparatus found to be very useful for rehabilitation by many researchers [2, 4, 11, 15, 16]. There have been a number of studies done on stepper to assess the feasibility for rehabilitation, however, most of them were limited to using electromyography (EMG) which has been considered as the most useful method to measure the muscle activity [15]. However, a few researchers stated that the EMG assessment is limited to the location of the muscles selected. In the situation with deeper muscles containing high threshold motor units the assessment through EMG gets limited in comparison to the fine low threshold motor units. This suggests that there is a need for other ways to find the muscle activity which is the starting point for rehabilitation [15].

The measurement of oxygen consumption is very useful for the assessment of physiological considerations, especially during rehabilitation of patients [9, 10, 14, 19, 20, 22].  There are numerous rehabilitation strategies that can be used, however, the better approach being an individualised approach [18], where each and every individual is assessed separately and the rehabilitation programme is specifically developed according to personal circumstance.

Test using the stepper machines has been used traditionally for submaximal testing due to their lower oxygen values in comparison to treadmill [13]. Balance issues, fatigue and higher rate of stepping are also some of the disadvantages which could be related to the use of stepper [13]. However, despite the fact that stepper machines are an important tool in rehabilitation, there has not been any significant research done to analyse their usefulness in terms of energy consumption [19].

Treadmill, on the other hand, is a common used equipment in rehabilitation [5, 7, 12]. Its research has been done for many years and has a reasonably completed database. It provides more collective form of physiological stress, as walking required by the participant results in higher uptake of oxygen and increased heart rate [1].

Today, it is popular for users to use treadmills in gymnasiums [23]. However, for those who cannot go to gymnasiums for some reasons, stepper exercise is an option [24, 25, 26]. Therefore, it is necessary to investigate whether correlations exist between stepper movement and treadmill walking.

The aim of this study was to investigate oxygen consumption during stepper movement and to analyse whether stepper movement and treadmill walking are correlated or not. Hopefully, this research would provide clinicians with a useful database and allow them to guide patients in rehabilitation.

This was a single centre, observational study of a cohort of the healthy. A total number of 22 healthy volunteers participated in the study, and they were all able to exercise on their own. All the participants were in the age group of 20-50 without any physical and medical disabilities or injuries. They were required to sign a consent form before they took part in the study. This project was approved by the university research ethics committee.

Reebok® mini side stepper (REM-7580) was used in this experiment. It consists of foot plates (Figure 1a), a knob to adjust the resistance and console (Figure 1b) that displays count, total count, time, calories and scan side to side action. Dimensions: H22, W51, D45 cm.

Vision fitness TM T 8500 treadmill was used for the experiment. Three different speeds with no inclination were used for the entire data collection. The treadmill picture is ignored.

The mobile Oxycon system consists of the following components (Figure 2):

Proper calibration was done before every data collection to get the accurate data.

The participants were asked to walk at their self-determined conformable walking speed for 1 min and their steps were counted for 15 seconds during walking. The procedure was repeated three times and the average cadence was taken as baseline, then 20% higher and 20% lower cadences were calculated from the baseline cadence. Three cadence values were then input into the Tempo Perfect Metronome Software (free from the internet) 17 that produces the beat sound accordingly for taking the corresponding data collection.

The first data collection was done for the resting data by asking the subject to sit on a chair.

After five minutes the oxygen mask was removed and the subjects were allowed to relax for five minutes. The stepper or the treadmill machines were then chosen randomly to avoid any advantage of the machine being used first. The data for three different cadences were collected on each machine. A total of seven sets of data (one resting, three different cadences each on stepper and treadmill machines respectively) were collected. All the subjects were instructed to use the stepper or treadmill machine in tandem with the beat produced by the Tempo Perfect Metronome Software, and made sure they did so accordingly (Figures 3).

The Oxycon Mobile® can give different variables as below.

All the data collected were checked for any errors and any participant with inappropriate data was requested to repeat the data collection. All the data were analysed using SPSS® (version 21). The general linear model for repeated measurement was used to compare differences between various groups of data. When some variables were not normal distributed, non-parametric methods were used to double check p values. Pearson’s correlation coefficient and linear regression were used to analyse whether two variables are linearly correlated or not, and if correlated a regression function will be constructed. The significant level was set at p<0.05.

Variables given by Oxycon Mobile ® system

The level of oxygen consumption (VO2 mean, ml/min) in the S1, S2, S3 showed strong correlation with T1, T2, T3, where S1 and T1 are baseline cadence in stepper and treadmill movements, S2 and T2 represents 20% higher cadence than the baseline one, and S3 and T3 20% lower cadence than the baseline one. Mean values showed that S3 consumed more energy than T3 by approximately 14% (Table 1). The correlation coefficient between stepper and treadmill movements in VO2 is very strong (0.789, p< 0.001) and a linear regression was constructed as seen in Figure 4. 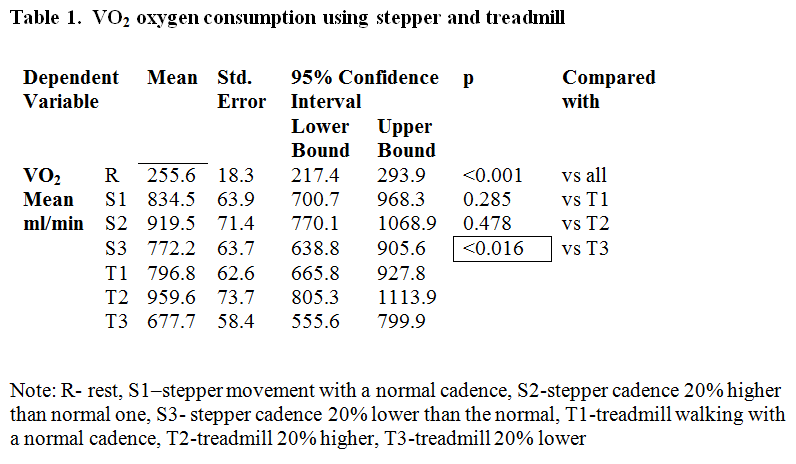 EqO2 mean in S1 (28.992) was very close to T1 mean value (28.33). It was found that the difference between S3 and T3 was significant, and T3 was higher than S3 by approximately 6% (Table 2). The correlation coefficient was also strong (0.489, p <0.001) and linear regression as seen in Figure 5. The mean at Rest was observed at 33.560, which was significantly higher than the other situations, because EqO2 is reversely proportional to VO2.

VCO2, which is the production of carbon dioxide per minute, was recorded. It is found that S1 and S3 were higher than T1 and T3 by approximately 16% and 11% respectively (Table 3). The correlation coefficient between two types of movements is 0.778 (p<0.001) as seen in Figure 6.

The mean for EqCO2, the minute volume and carbon dioxide output, was recorded in Table 4. It was found that S1 and S3 were lower than T1 and T3 by approximately 6% and 10%, respectively (Table 4).  The correlation coefficient is 0.652 with p<0.001 as in Figure 7, showing a strong correlation.

At Rest, the lowest mean of energy consumption (EE) was recorded as 1791.723. It was found that S3 was significantly higher than T3 by approximately 14% as shown in Table 6. The correlation coefficient was 0.790 with p<0.001 as in Figure 9, showing strong correlation between two types of movements.

VE mean value showed that S1 was higher than T1 by approximately 9% in Table 7. The correlation coefficient between stepper and treadmill is 0.826 with p<0.001 as Figure 10.

Mean value for MET showed that S3 is higher than T3 by approximately 15% in Table 8.  The correlation coefficient for MET was 0.598 with p<0.001 as Figure 11, so two type of movements were correlated.

Qtc results showed correlation between stepper and treadmill as well, with the coefficient as 0.806 with p<0.001 as in Figure 12. It is also found that S3 is higher than T3 by approximately 11% as in Table 9.

The results of the present study showed significant correlation of oxygen consumptions between using the stepper and treadmill. Also, almost all parameters analysed showed that there are linear correlations between two types of movements, and nearly half of the correlation coefficients reached or close to 0.8. Therefore, some of the regression functions provided are useful and would be used to describe the relationships between stepper movements and treadmill walking. In other words, users can use stepper movement data at home to estimate how much energy they could have consumed in treadmill walking in gymnasiums. The database produced from this study allows clinicians and physiotherapists to prescribe an exercise plan for the patients who 1) physically cannot go to gymnasium and have to stay at home, and 2) cannot horizontally walk in rehabilitation. To our best knowledge, there is little previous research done on this topic [4, 7, 11].

Limitation of the study

Lack of ability of a few participants to work accurately on the stepper initially as they were not trained how to work with beep produced by the Tempo Perfect Metronome software. Sometimes it was getting difficult for them to keep balance on the stepper also.

In the near future, the studies may focus on muscle force, muscle activities and kinematics and kinetics in the lower limbs in stepper movements. Further research should be done for patients, who may give practical feedbacks to different machine and movement types. If patients were not like stepper due to its stability, a handle or support could be designed for them.

-        Availability of data and materials: the raw data will be available if it is required.

-        Funding: The department funding for cost of equipment.

-        Authors' Contributions: AM, recruitment of participants and data collection. AM, GA, RA, WW ran the analysis. WW, statistical analysis. AM, WW, writing of paper. WW, conception of the study. All authors made substantial contribution to the manuscript.

-         Acknowledgements: The authors would like to thank all participants, and would be grateful to Mr Sadiq Nasir for helping data collection and to Mr Ian Chretien for editing English.