A total of 88 patients, including 38 perimenopausal patients and 50 postmenopausal patients, who were diagnosed with cervical HSIL after LEEP in Shanghai Jiaotong University affiliated Songjiang Hospital from May 2016 to May 2021 and then underwent hysterectomy within 3 months were collected. The patients' age, hrHPV typing, liquid-based thin-layer cytology (TCT), cervical biopsy P16 expression under colposcopy, endocervical curettage(ECC) during LEEP , margin status of LEEP and whole uterine pathology were reviewed and the risk factors of residual lesions after LEEP in HSIL patients were analyzed statistically with t test,χ2 test or logistic regression analysis.

High-grade squamous intraepithelial lesions (HSIL) are recognized as precancerous lesions in cervical cancer. The 2012 American Society of Colposcopy and Cervical Pathology (ASCCP) guidelines suggest that the main treatment for HSIL was Loop Electrosurgical Excision Procedure (LEEP). LEEP is easy to operate and less bleeding, but there is a risk of residual, recurrence and even progression of the lesions after operation. At present, the risk of residual and recurrence of HSIL lesions after LEEP has been reported in various studies, which is 4.0% ~ 24.7%[1]. In this study, we retrospectively analyzed the clinical data of HSIL patients with hysterectomy after LEEP to investigate the risk factors of LEEP residual lesions.

A total of 88 patients with cervical HSIL diagnosed by histopathological examination after LEEP in Shanghai Jiaotong University affiliated Songjiang Hospital from May 2016 to May 2021 and underwent hysterectomy within 3-month intervals were collected.Of them, there are 38 perimenopausal women and 50 postmenopausal ones.The patients with other malignant tumors,history of radiotherapy and chemotherapy,and severe complications were excluded. The patients' age, hrHPV typing, liquid-based thin-layer cytology (TCT), cervical biopsy P16 expression under colposcopy, endocervical curettage(ECC) during LEEP, margin status of LEEP, and uterine pathology were recorded retrospectively. This study was approved by the ethics committee of our hospital, with informed consent of all patients.

Colposcopy images were described and diagnosed according to the 2011 International Federation of Cervical Pathology and Colposcopy (IFCPC) colposcopy terminology [2]. Cervical biopsy 1 to 4 points. P16 expression was detected by immunohistochemistry according to the kit instructions. If the pathological results of cervical biopsy are HSIL or above, further treatment should be performed in time. The diagnostic criteria of HSIL are based on the 4th edition of the WHO classification standard for female reproductive organ tumors (2014). HSIL includes cervical intraepithelial neoplasia (CIN) Ⅱ and CIN III.

Perform LEEP according to the 2011 IFCPC [2] standard.Positive margins were defined as margins ≤3mm for cervical specimens with ≥HSIL lesion distance resection, including cervical canal lateral (inner) and cervical vaginal (outer) margins. LEEP power 40W when electrocutting, 60W when electrocoagulation. Starting from 12:00 of the cervix, the whole transformed area was removed by rotating 360° clockwise, and the resection was as far as possible to more than 3mm outside the lesion. At the same time, ECC was performed, and curettage tissue from2-4cm inside cervical ≥LSIL was positive margin.

Hysterectomy was performed to patients confirmed HSIL with a benign disease such as uterine leiomyoma or metroptosis, or patients with persistent hrHPV infection who strongly require hysterectomy after LEEP. 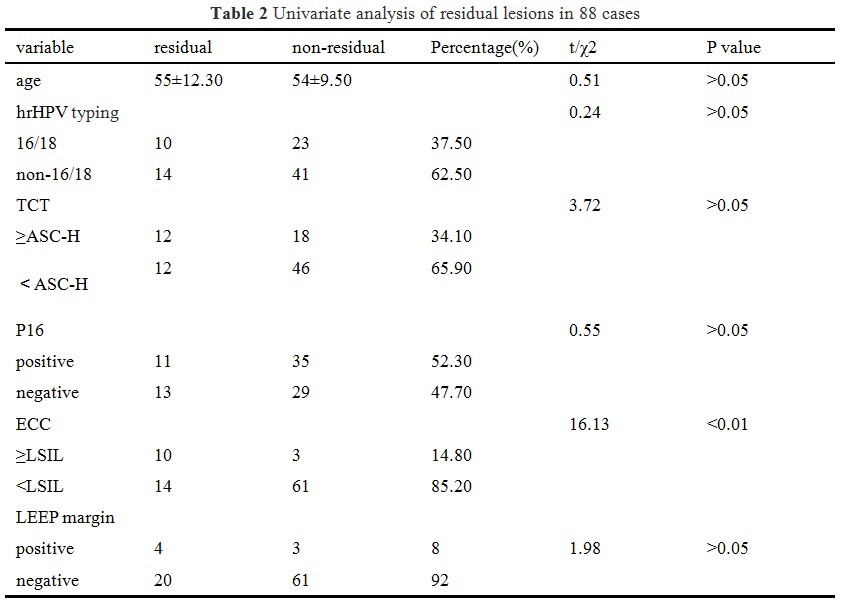 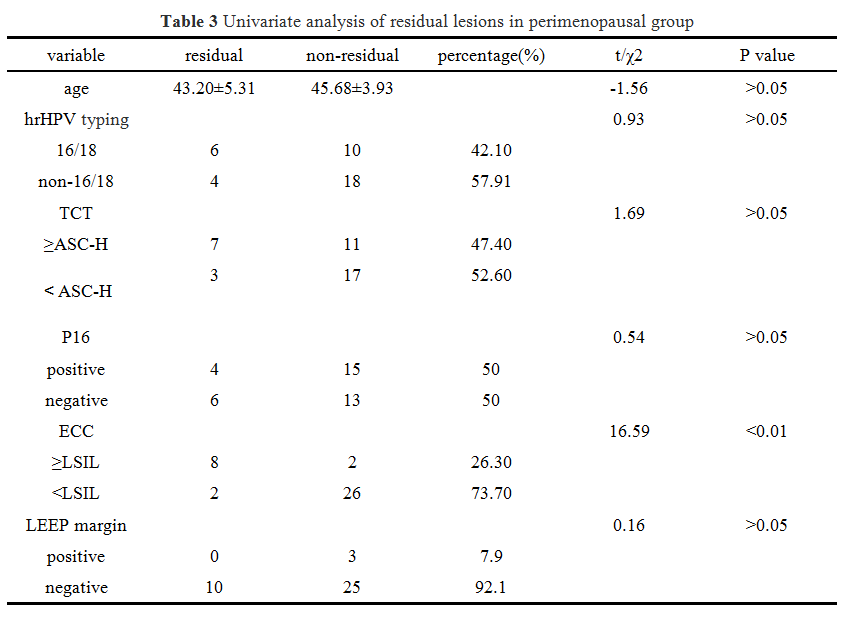 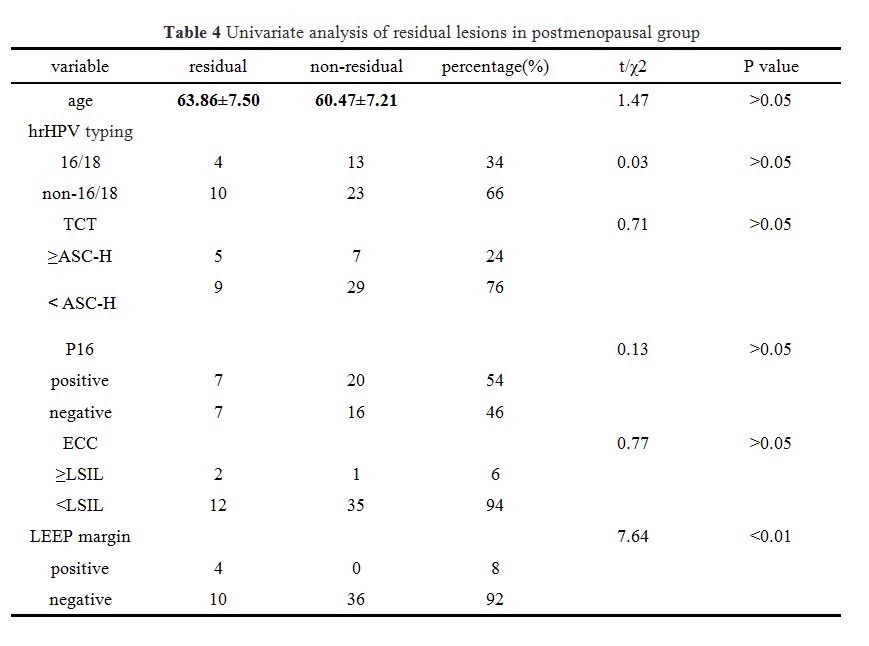 LEEP is the most common treatment for HSIL. At present, some researchers have reported that the incidence of residual or recurrence of cervical lesions after LEEP is 4%-25% [1]. In this study, the residual rate was 27%.The patients with residual lesions are with 88% hrHPV infection, 40% HPV16/18 infection, and high infection of persistent hrHPV.The majority of our study are postmenopausal women, so the residual rate was higher than reported ones.

In this study, all patients underwent colposcopy, cervical biopsy and P16 test before LEEP. According to the 2011 International Federation of Cervical Pathology and Colposcopy (IFCCP) guidelines, LEEP was performed to remove the lesion as much as possible. The optimal treatment for postmenopausal cervical HSIL has not yet been determined, but cervical coning is still recommended by various guidelines because it can provide the lesion with or without interstitial invasion and achieve the dual effect of diagnosis and treatment [3–6]. The US Preventive Services Task Force (USPSTF) updated guidelines for cervical cancer screening in 2018 adopted the same strategy for cervical cancer screening in women aged 30–65 years [7–8]. In our study, there was no statistical difference in the rate of residual lesions between the postmenopausal and the perimenopausal group, which was consistent with the individualized risk assessment treatment recommended by current guidelines. The principles of diagnosis and treatment for cervical lesions in menopausal women were the same as those in the premenopausal ones.

Chinese scholar Tao Hua [9] conducted a six-month follow-up of 752 HSIL cases after LEEP, including colpoposcopy, re-coning or hysterectomy, etc., and found that residual or recurrent disease was associated with positive LEEP margin (OR = 13.34, P < 0.01). Cheng et al. [10] found that, compared with premenopausal patients, the satisfaction rate of colposcope in postmenopausal patients was significantly reduced (23.2%vs68.9%,P < 0.001). In postmenopausal patients, diagnostic consistency between conization and colposcopic biopsy was significantly reduced (46.4%vs68.9%, P = 0.004), and the positive marginal rate of conization was higher (20.8%vs10.9%, P = 0.020). In this study, positive LEEP margin was found to be a risk factor of residual lesions in perimenopausal group (OR = 3.50, P < 0.05). Because postmenopausal patients have a long cervical canal, conization may not guarantee removal of a wide enough range of cone height and width to avoid residual lesions. It is unclear what is the optimal treatment for postmenopausal women with obvious cervical atrophy when cervical conization is not possible. Hysterectomy is generally considered as the last choice. Therefore, we need to choose an individual strategy for postmenopausal patients with cervical atrophy. Postmenopausal women with hrHPV infections have atrophy of the reproductive tract and relatively low immunity.Some scholars suggest that drug supplement therapy should be used as early as possible even after hysterectomy in order to reduce the recurrence caused by the lesions hidden in the scar on the top of the vagina [11],. The use of condoms promotes the regression of CIN lesions and the clearance of HPV [12]. Therefore, even if postmenopausal women do not need contraception, it is still recommended to use condoms during sex.

Colposcopy plays a key role in the prevention of cervical cancer, but some studies have suggested that colposcopy biopsy may miss 30%-50% of HSIL [13]. Therefore, many researchers proposed that colposcopy-guided multi-point biopsy and ECC could be used to improve the accuracy of colposcopy. Debate about the role of ECC has persisted in recent decades [14]. Some studies determined that the ECC can check out 2–12% misdiagnosis to HISL or cancer after biopsy [15–17]. Gage JC et al. [17] detected CIN2 + in only 1.01% of 13 115 women with conventional ECC under colposcopy, suggesting that conventional ECC has limited value. ECC is only recommended to cytological HSIL, age at 46 years and older. Milan et al. [18] showed that ECC had little effect on additional diagnosis when the cervical lesions were fully evaluated during colposcopy and multi-spot biopsy was performed. However, ECC may have additional diagnostic value for unsatisfactory colposcopy, or for screening risks that are inconsistent with diagnosis under colposcopy. In this study, all HSIL patients received ECC during LEEP, and the positive rate of ECC was statistically different between the group with residual lesion and non-residual lesion (χ2 = 16.13, P < 0.01). ECC examination during LEEP was also significant, suggesting that we should pay attention to ECC. However, in the study of postmenopausal patients, there was no statistical difference in the positive rate of ECC between two groups (χ2 = 0.77, P > 0.05), which may be related to the small number of cases, and further study is needed.

Nevertheless, this is a retrospective study, and all the patients in this study were older than 40 years old, so it is not representative for patients of other ages. Foreign scholars have found [19] that, compared with age, LEEP margine status and CIN level, the persistent infection of HPV is a more important factor to cause lesion residue. Unfortunately, since duration of HPV infection was not recorded in some cases in this study, this factor was not stratified for analysis. In addition, the sample size of this study is small, and the conclusions need to be further confirmed by large sample studies, so it will be more meaningful to conduct prospective multi-center clinical studies in the future.

We declare that we have no financial and personal relationships with other people or organizations that can inappropriately influence our work, there is no professional or other personal interest of any nature or kind in any product, service or company that could be construed as influencing the position presented in the manuscript entitled,