Objectives: CircRNA may play essential roles and act as biomarkers in tumor development due to their special stable structure. However, the mechanism by which circRNAs affect OSCC progression is still unclear.

Conclusions: Our results demonstrate that circ_0005232 exerts its tumor-promoting effects by sponging miR-1299 which then affects function of CDK6. Therefore, circ_0005232 may represent a novel potential prognostic biomarker and therapeutic target in OSCC.

Oral squamous cell carcinoma (OSCC) accounts for over 90% of oral malignant tumors, and it is the sixth most common cancer worldwide[1]. Due to the risk factor exposure, low cure rate, and high mortality rate, OSCC has become a global public health problem, with 5-year survival rates of about 80% for early OSCC (Stage I and II) but only 20% for advanced OSCC[2, 3]. Despite years of research, the pathogenesis of OSCC remains unclear.

The progression of OSCC are accompanied by a series of dysregulated non-coding RNAs (ncRNAs) in cancer cells, which may be potential diagnostic markers for OSCC treatment. NcRNAs are a type of RNA without coding function which can regulate the expression and function of various genes at the transcriptional and post-transcriptional levels. At present, reported ncRNAs mainly consist of microRNA (miRNA), long non-coding RNA (lncRNA) and circular RNA (circRNA)[4]. Recent studies have shown that circRNAs can be used as diagnostic markers for tumor progression[5–8]. With the development of research and sequencing technology, circRNAs have become better understood. Emerging evidence show that circRNAs are endogenous ncRNAs with conserved sequences, stable states, and high abundance[9, 10]. Since there are many miRNA binding sites on circRNAs, they can regulate mRNA expression by competing miRNAs away from mRNA, leading circRNAs to be considered miRNA sponges. Due to the tissue specificity and stability of circRNAs, they have become potential markers for some diseases, especially tumors[11, 12]. CDK6, a member of cyclin-dependent kinase (CDK) family, is a classical cell kinase. Abnormal activation of this kinase can lead to uncontrolled cell proliferation and cancer. Therefore, the importance of CDK6 in promoting tumorigenesis and progression makes it an attractive target for drug inhibition[13].

In the current study, we use microarray to analyze expression of circRNAs in 3 pairs of OSCC tissues. Based on the microarray and PCR results, circ_0005232 was selected as our research target. Our findings confirm that circ_0005232 exerts its tumor-promoting effects through the miR-1299/CDK6 axis. Therefore, circ_0005232 may be a potential biomarker of OSCC.

Our study collected specimens from patients who were diagnosed with OSCC and who received maxillofacial surgery at the Stomatological Hospital Affiliated to China Medical University. The specimens were stored at -80℃ for long-term preservation. Patients were diagnosed with OSCC by the pathology department, and OSCC tissues and corresponding adjacent healthy tissues (AHT) were taken at least 3 cm apart. This research was authorized by the ethics committee of the Stomatological Hospital Affiliated to China Medical University, and all patients signed informed consent. The relevant clinical information and pathological characteristic data were collected and collated for statistical analysis.

Experimental cells were plated (5×105) in 6-well plates. After 24 h, when the cell concentration had grown to 70% and the cells were in the logarithmic growth phase, the cells were transfected with si-circ_0005232 using Lipofectamine 3000. Cells were collected at 48h for functional experiments.

In this assay, 500–1000 squamous cells were added to every new well of 6-well cell culture plate, cultured for 96h, then medium changed. Cells were cultured for 12–15 days depending on the growth rate and of each cell, after which 1ml methanol was added to each well and cells were fixed for 10min. After fixing, methanol was discarded and 1ml crystal violet was added to each well to stain for 10min. Wells were then washed twice with 1ml PBS (phosphate belanced solution) until the colony was clearly visible. A light microscope was used to capture images. All experiments were performed in triplicate.

An EdU cell proliferation kit (RiboBio, Guangzhou, China) was used to test DNA synthesis and cell proliferation. Cells were incubated in 96-well plates at the required density. After growing for 36 h, 50 µM EdU was added to cells and incubated for 3 h, fixed with 4% paraformaldehyde, then stained. Images were observed under a fluorescence microscope, with EdU positive (red) and Hoechst 33342 positive (blue) cells counted in 5 randomly captured fields. The cell proliferation rate was calculated as EdU-positive cells /Hoechst33342-positive cells. All experiments were performed in triplicate.

Transwell assays were used to detect the effect of circ_0005232 on the migratory ability of cancer cells. For cell migration assays, tumor cells were evenly spread in double-free medium in the upper chamber of a transwell chamber, and complete medium containing 10% serum was added to the lower chamber. For cell invasion assays, cells were seeded in upper chambers pre-coated with 100% Matrigel (BD Biosciences) then treated the same as in the migration assay. Cells passing through the transwell were obtained after 24 h culture, at which point they were fixed with methanol for 1 minute, stained, dried and sliced. Images were collected under microscopy and cells were counted with Image J. All experiments were performed in triplicate.

Transfected cells were uniformly plated into a 12-well plate and cultured 24 h until 90% confluency. A 10-µL sterile tip held perpendicular to the 12-well plate was used for scratching to ensure a consistent scratch width. After scratching, the cells were washed two times with PBS and culturing continued. Images were obtained at 0 h, 6 h, 12 h, 24 h and 36 h. All experiments were performed in triplicate.

Total protein was extracted from squamous cells. Cells were lysed (Beyotime, ShangHai, China) and total protein prepared following the manufacturer’s instructions. The absorbance of each well was measured at 560nm with a microplate analyzer, then the known protein content and absorbance were used to draw a standard curve to calculate the sample concentration. Equal amounts of protein were then separated via electrophoresis before being transferred to PVDF membranes (Millipore, Darmstadt, Germany). PVDF membranes were blocked with 5% defatted dry milk for 2h, incubated with primary antibody overnight at 4℃. Next, PVDF membranes were incubated with secondary antibodys for 2h to complete a color reaction. Actin was used as the internal protein loading control. All experiments were performed in triplicate.

RNA immunoprecipitation (RIP) assay was performed using the EZMagna RIP Kit (Millipore, Billerica, MA, USA) according to the instructions. RNA-protein compounds were precipitated using antibodies against the target protein CDK6, then the RNA bound on the compounds were isolated and purified. Finally, the target RNA was analyzed via qRT-PCR. After co-transfection, cell lysate was prepared and mixed with magnetic beads, immunoprecipitation buffer was added, and the RNA binding protein immunoprecipitation reaction was performed. Retrieved RNA were then purified and analyzed with reverse transcription and qRT-PCR. All experiments were performed in triplicate.

GraphPad Prism8 and SPSS 17.0 were used to calculate experimental results. Each experiment was repeated three times.

Characterization and expression of circ_0005232 in OSCC

To test whether circ_0005232 is abnormally expressed in OSCC, we used qRT-PCR to probe circ_0005232 expression levels in 53 pairs OSCC tissue and matched healthy tissues and found significantly higher levels in the cancer tissues. The results were evaluated as follows ratio = ΔCt (normal tissue)/ ΔCT (cancer tissue), with a higher ratio representing higher expression (Fig. 1a). In our experiment, a ratio > 1 is considered high expression; otherwise, it is considered low expression. Clinicopathological parameters of the 53 patients diagnosed with OSCC are shown in Table 1, and circ_0005232 was found to relate to TNM stage and lymphatic metastasis. We then measured the expression level of circ_0005232 in two OSCC cell lines, CAL27 and SCC9, and in the noncancerous HOK cell line, and found higher circ_0005232 in the OSCC cell lines (Fig. 1b).

We next predicted target genes of miR-1299 using TargetScan and selected CDK6 for further study based on references (Fig. 6a). RIP testing indicated that miR-1299 complexes with CDK6 (Fig. 6b). Our results thus far suggest that circ_0005232 plays a role in OSCC through sponging miR-1299, so we tested whether circ_0005232 regulates expression of CDK6, a known target of miR-1299. QRT-PCR and Western blot indicated that CDK6 was significantly decreased and increased after circ_0005232 knockdown and overexpression, respectively (Fig. 6c). Rescue experiment results suggested that inh-miR-1299 restored the effects of si-circ_0005232 on CDK6, while miR-1299 mimics reversed the effects of circ_0005232 on CDK6 (Fig. 6d). EdU rescue experiments were performed with si-circ_0005232 and CDK6 mimics, and CDK6 mimics were found to restore the effects of si-circ_0005232 on proliferation changes (Fig. 6e). These results support the hypothesis that circ_0005232 affects CDK6 to promote proliferation, migration, and invasion at least partially by sponging miR-1299.

Extensive research on circRNAs has raised many new insights into cancer development. Researchers now use advanced sequencing and micro-array technology to better investigate circRNAs and verify their function and molecular mechanism[14–19]. CircRNA are considered potential biomarkers and therapeutic targets for cancer because of their special stable structure[20, 21]. However, the mechanisms by which circRNAs affect OSCC progression are still unclear. Our study was based on a previous study[22] in which 407 differentially expressed circRNAs were detected between OSCC and AHT using high-throughput sequencing analysis, with 134 highly expressed and 273 lowly expressed in OSCC. Circ_0005232 was an implicated highly expressed circRNA. Following preliminary qRT-PCR experiments, we chose circ_0005232 as the focus of this study. The relationship between circ_0005232 and OSCC was confirmed through bioinformatic analysis and functional experiments. Circ_0005232 is a newly discovered circRNA which has not yet been reported in any other cancers. QRT-PCR results from 53 pairs of OSCC tissue confirmed that circ_0005232 has significantly higher expression in OSCC. Correlation analysis of clinical pathological characteristics indicated that high circ_0005232 is related to lymphatic metastasis. To better define the relationship between circ_0005232 and OSCC, we knocked down circ_0005232 in OSCC cell lines by transfecting with si-circ_0005232 then performed colony formation, transwell migration and invasion, and wound healing assays. We found that circ_0005232 silencing inhibited proliferation, migration, and invasion in OSCC cells, suggesting that circ_0005232 plays an important role in malignant OSCC development. To determine functional effects of circ_0005232 in OSCC cells, we overexpressed circ_0005232 then repeated the functional experiments, finding that overexpression of circ_0005232 significantly improved proliferation, migration, and invasion ability. These results suggest that circ_0005232 may serve as a cancer-promoting gene that affects biological functions of CAL27 and SCC9 in OSCC, consistent with the results of clinical and pathological data analysis.

We predicted target proteins of miR-1299 by TargetScan and selected CDK6 for further study. CDK6 is encoded by the CDK6 gene, which is a cell division protein kinase regulated by cyclins[40]. Reports in breast cancer[41], liver cancer[42] and osteosarcoma[43] show that miR-1299 acts on CDK6 through sponging to play a role in tumor progression. RIP verified that miR-1299 binds to CDK6 in squamous cell carcinoma cell lines, so we speculated that circ_0005232 might regulate the miR-1299/CDK6 axis in OSCC. Mechanistic experiment results verified that miR-1299 could restore the effects of circ_0005232 on CDK6 RNA and protein expression and that CDK6 could restore the effects of circ_0005232 on proliferation in SCC9 cells. Taken together, our results suggest that circ_0005232 regulates expression of CDK6 and affects the malignant function of OSCC cells through sponging miR-1299.

In conclusion, the results of this study indicate that circ_0005232 is a cancer-promoting gene in OSCC. Circ_0005232 affects biological functions of OSCC through the miR-1299/CDK6 axis, and as such it may be a potential diagnostic marker of OSCC.

Ethical Approval and Consent to participate

All authors have given approval to the publication of the article.

The data and materials used in the current study are all available from the corresponding author upon reasonable request.

The present study was supported by the contract grant sponsor Natural Science Foundation of Liaoning Province, China (No. 20180550782).

We would like to acknowledge the Key Laboratory of Precision Diagnosis and Treatment of Gastrointestinal Tumors (China Medical University), Ministry of Education for providing the space and equipment for conducting the experiments. 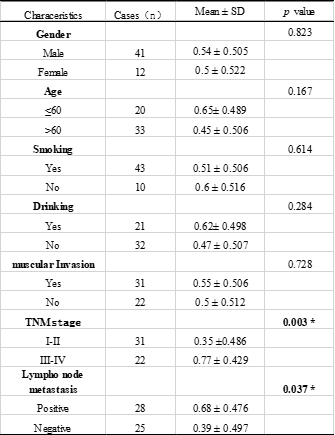