Pedestrians in Iran: Determinants of unsafe traffic behaviors of pedestrians

Objective: Pedestrians are among the most vulnerable groups in traffic accidents. In this cross-sectional study, the behavior of 600 pedestrians in Iran, using a pedestrian traffic behavior questionnaire. Cluster sampling was conducted among 30% of the health centers in each district of the city. Thereafter, individuals were randomly selected from each center depending on the covered population.

Results: Although 17% of the pedestrians demonstrated safe traffic behaviors, over 85% were distracted, more than 80% did not comply with traffic laws, the majority violated rules and displayed no positive traffic behaviors, and half of the participants were aggressive. Age, gender, marital status, education level, daily walking rate, and transportation mode were significant predictors of traffic behavior.

Road traffic deaths in Iran are among the highest in the world and the Eastern Mediterranean region (4). Majority of the accidents occur because pedestrians do not comply with traffic laws (5). They enter the streets paying no attention to vehicles and cross the street without paying attention to vehicles (1). In Iran, over 39% of the deaths caused by traffic involve pedestrians (6). This study aims to investigate pedestrian traffic behaviors (PTB) in different domains and to determine the predictors of unsafe behavior.

This descriptive cross-sectional study was conducted among 600 pedestrians in the city of Urmia, northwestern Iran, from May to October 2018. Cluster sampling method was applied. The health centers of each clustert were randomly selected. Then, from each center , the participants were randomly selected with respect to the inclusion and exclusion criteria.

The inclusion criteria were (a) being 18 years old or above and (b) being capable of standing and walking. After selecting the respondents, they were invited to visit the health centers to participate in the study.

Data in this study were collected by means of The Pedestrian Behavior Questionnaire (PBQ). This instrument proved to be valid and reliable(7) and consisted of 29 items measuring pedestrian behaviors across the following five dimensions, using a five-point scale ranging from 1 to 5: (1) adherence to traffic rules (7 items) (e.g., I cross the street after the vehicles are fully stopped); (2) traffic violations (10 items, reverse scored) (e.g., I don’t use the pedestrian bridge because most people don’t); (3) positive behaviors (2 items) (e.g., I let the vehicle pass even if I have the priority right); (4) traffic distraction (4 items, reverse scored) (e.g., I use my mobile phone while crossing the street); and (5) aggressive behaviors (2 items, reverse scored) (e.g., If I get angry at the behavior of a driver, I would kick or punch the car). Total PTB score is calculated as the sum of scores received in each of the five domains. The higher the score, the safer the behavior. Cronbach’s alpha, of PTB was 0.83. The number of items in each domain and possible ranges and mean score of items in each domain are shown in Table 2. Socio-demographic characteristics including age, gender, marital status, education degree, walking minutes/day and transportation mode transportation.

As shown in Table 1, participant characteristics and the five different domains of PTB. Univariate regression analyses revealed that traffic behaviors were better among the elderly compared to the other age groups, among females compared to males, and among the married compared to others. As the level of education increased, the traffic behaviors became safer. The behaviors of bicyclists and motorcyclists were less safe than those using other transportation modes. The people with longer daily walking rate showcased safer behaviors. 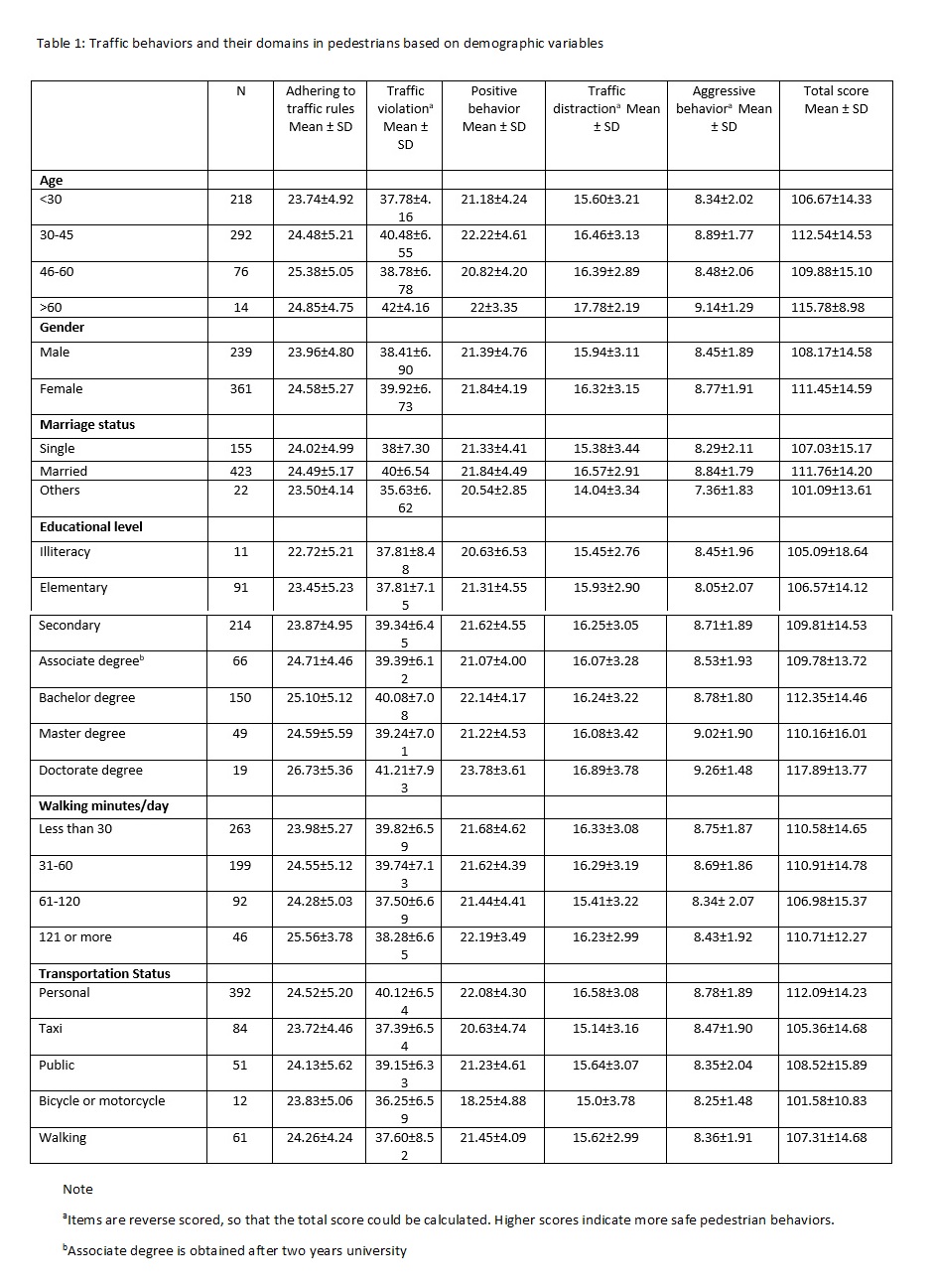 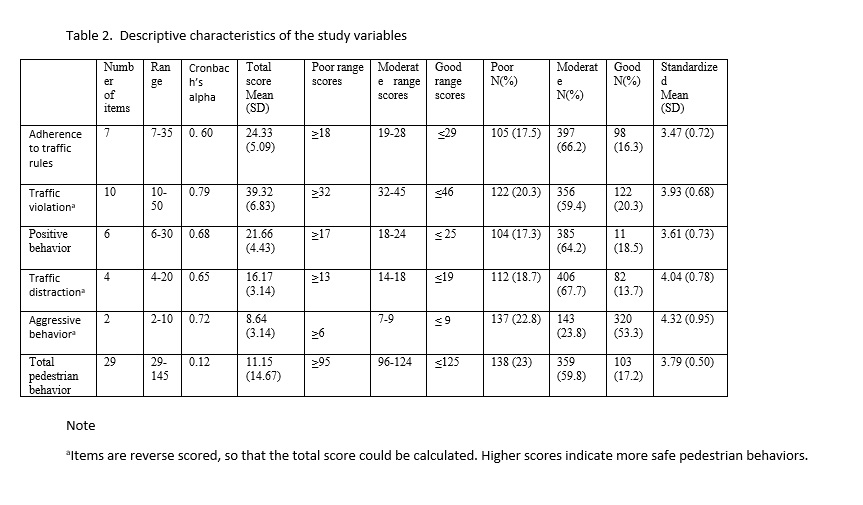 As shown in the table, traffic behaviors were good among only 17% pedestrians. Over 85% pedestrians experienced traffic distraction and over 80% of them did not adhere to traffic laws. Most of them showcased traffic violations and demonstrated no positive traffic behaviors, and half of participants even demonstrated aggressive behavior. In the present study, the score in the "aggressive behavior" domain of the studied pedestrians was better than that in the other domains, while the score in the “adherence to traffic rules” domain was lower than that in the other domains.

Results of a series of univariate regression analyses demonstrated that all the study variables were significantly associated to PTB. Among those aged below 30 years, the traffic behaviors were better than that for those aged more than 30 years. More particularly, in the age group of the elderly, PTB was 10.7 points higher than that for the youth group. Total score of men was 3.83 points lower than that of women and those who were single had more unsafe behaviors than the others and their score was 8.57 points lower than the rest. Married people displayed safer behaviors compared to those who were single and others. The higher the level of education, the more significantly improved were the traffic behaviors. 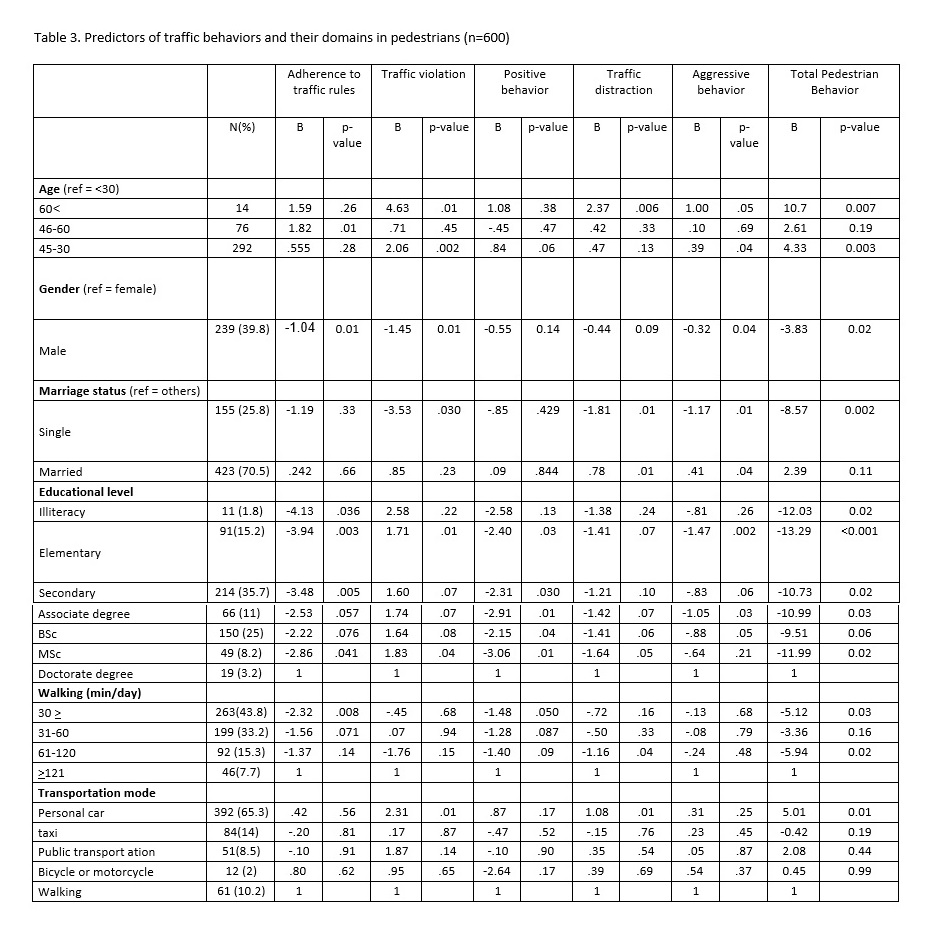 To reduce intervention costs, it is essential to perform various training interventions, make changes in the physical environment, and increase policies to promote positive pedestrian behaviors. One way to do this is by conducting training workshops in the selected neighborhoods on pedestrian and cyclist’s safety (9), designing new pavements with different performance for pedestrian safety (10), providing reflective products and training brochures (11), increasing compliance with priority rights of pedestrians by drivers and stopping to let them pass(12), and increasing positive behaviors and mutual respect alongside the improvement in Iranian infrastructure and culture.

According to the findings of this study, all the demographic variables were significantly associated with traffic behaviors. Age was one of the most important predictors of PTB, so that with aging, people demonstrated higher levels of safe behaviors. This finding is similar to the result of other studies (1, 8). In the present study, the PTB score of the elderly was 10.7 points higher compared to that of those aged under 30 years. In examining behavioral dimensions, it was also observed that age had a significant impact on traffic violation, traffic distraction, and aggressive behavior.

This was similar to another study (13) wherein age was found to be significantly negatively associated with aggression and violation. It could be said that the higher experience of the elderly could lead them to have safer behaviors. Moreover, it could be argued that adolescents are more likely to use mobile phones and other distractive devices that could increase their distraction. A study showed that almost 100% of the Americans aged 18–29 years had mobile phones and about 92% had smartphones (14). Mobile use is one of the important distractors and environmental and training intervention programs are required in this regard.

This study showed that gender was a predictor of pedestrian behaviors and women showcased safer behaviors than men. According to the World Health Organization (1), the traffic accident death rate in Iran was 15932 in 2016, of which 78% included to men (1). A research carried out in the United States showed that 70% of the pedestrian deaths was related to men. In Mexico, the pedestrian mortality rate among men was higher than that among women (15, 16). In the present study, the men and those who were single were less adhering to traffic rules, and they demonstrated higher violation and higher aggression. A greater emphasis on men is required in the interventions for safe traffic behaviors.

Results of the present study showed, with an increase in education level, the traffic behaviors of the pedestrians significantly improved, which was similar to the findings of other studies (17, 18). Higher education had a significant impact, especially on the dimensions of adherence to traffic rules and aggressive behaviors. Studies have shown that increased level of education also affects the acquisition of other healthy behaviors, such as physical activity (19, 20). It can be argued that, with increased education level, the perception of various issues is increased, so people can better understand safe behaviors.

This study showed that, in individuals with more walking rate, adherence to traffic rules was significantly better. Also, higher experience of walking and observing behaviors of others in the environment makes people practically understand the laws. Studies have also shown that seeing the behavior of others in the environment leads to the same behaviors among the individuals in Iran, the rate of death and injury from traffic accidents is high. Therefore, it is essential to examine the behavior of users and determine the predictors for implementing interventional programs with the aim of reducing the burden of traffic accidents.

The present study found that the behaviors of the Iranian pedestrians were rather unsafe. The youth, those who were single, those with lower education, those with less walking rate, as well as bicyclists and motorcyclists demonstrated more unsafe behaviors. It is essential to have interventional training programs to improve all domains of traffic behaviors with respect to age and other predictors.

The present study didn’t examine traffic accident history of the participants or their family and friends, language, and ethnicity were not assessed, which could affect the traffic behavior. Another limitation is the use of self-reports which may have resulted in biased answers.

All relevant data are available within the manuscript. In case of need, the data that support the findings of this study are available from the corresponding author on reasonable request.

Declaration of Competing Interest: The authors declare that they have no competing interests.

Acknowledgements: We would like to thank all the participants for their contributions to the present study.

The authors declare that they have no known competing financial interests or personal relationships that could have appeared to influence the work reported in this paper.