Background: Lung cancer is a leading cause of death worldwide. MicroRNAs (miRNAs) are small noncoding RNAs that regulate gene expression and may act as both tumor suppressors and as oncogenes. The presence of single nucleotide polymorphisms (SNPs) inside the miRNA genomic region could affect target miRNA maturation, expression and binding to its target mRNA and contribute to cancer development. Previous studies on the SNPs Rs2910164 in miR-146a and Rs767649 in miR-155 showed association with non-small cell lung cancer (NSCLC) development. Thus, the aim of study was to detect any correlation between those SNPs in Iranian NSCLC patients.

Methods: In a small cohort study, 165 NSCLC patients and 147 non-cancer controls were enrolled between Apr 2015 – Sep 2019 at the Masih Daneshvari Hospital, Tehran-Iran. Allele frequencies from genomic DNA of blood PBMC was studied using PCR-RFLP and their association with the risk of lung cancer was evaluated.

Conclusion: The findings of this study suggest that miR-146a rs2910164 and miR-155 rs767649 polymorphisms could be related with the risk of NSCLC in an Iranian population. However, a larger multi center study across Iran is needed to confirm these findings.

Lung cancer is the most common cancer worldwide and is associated with high mortality rates [1]. The two main subtypes of lung cancer are small-cell (SCLC) and non-small-cell lung carcinoma (NSCLC). NSCLC encompasses over 80-85% lung cancers although SCLC which totals 12% of all cases is more aggressive than NSCLC [1]. Despite considerable improvement in diagnosis and treatment; lung cancer remains the leading cause of global cancer-related deaths [2]. Improving our knowledge of the molecular pathology of NSCLC is important in achieving earlier diagnosis and successful treatment. Although smoking is one of the major risk factors for lung cancer, nonsmokers are suffer from the disease [3]. Indeed, lung cancer is now considered as a multifactorial disease resulting from a combination of genetic background and lifestyle habits such as diet, smoking and environmental pollution [4].

Previous studies have demonstrated the importance of multiple genes in lung cancer pathology including P53, Myc and BRCA1 [1]. In addition to these genes; microRNAs (miRNAs) have recently been identified as important factors in the development of numerous cancers [5]. miRNAs are a family of endogenous small noncoding RNAs that regulate gene expression post transcriptionally. miRNAs are implicated in the regulation of almost all biological process and may has function as either oncogenes or tumor suppressor elements. Dysregulation of miRNA expression is reported a wide array of cancers where they play key roles in oncogenesis including the promotion of invasion, metastasis and angiogenesis [5].

Recent attention has focused on the effects of single nucleotide polymorphisms (SNPs) within non-coding regions of miRNAs. SNPs can significantly affect the production or processing of miRNAs by modulating their expression or by altering their association with the 3′ untranslated regions (UTRs) of their target mRNAs. Thus, SNP-induced alterations in miRNA maturation, structure and expression may impact on cancer susceptibility [6]. Rs2910164 and rs767649 polymorphisms have been frequently observed in association with lung [7, 8], breast [9], cervical [10] and hepatocellular [11] cancers. In the current study we aimed to assess the possible association between miR-146a rs2910164 and miR-155 rs767649 polymorphisms in an Iranian cohort with newly diagnosed NSCLC.

One hundred and sixty-five patients with newly diagnosed NSCLC (aged 58.5 ± 8.6 years) were recruited at the Masih Daneshvari Hospital, Tehran, Iran between Apr 2015 and Sep 2019. One hundred forty seven age- and gender-matched healthy controls with a negative history of cancer were also enrolled. Demographic information of study participants is shown in Table1. The Ethics Committee of the Masih Daneshvari Hospital approved the study and all subjects gave written informed consent (Ethics committee approval number: IR.SBMU.MSP.REC.1397.525).

The primer sequences for each PCR reaction is shown in Table 2. The cycle parameters for the PCR analysis were as follows: initial denaturation at 95°C for 5 min, 35 cycles of denaturation at 94°C for 30 sec, annealing at 58°C for 1min and extension at 72°C for 1 min and a final extension at 72°C for 10 min.  To identify the miR-146 C/G polymorphism, the PCR product was digested with the restriction enzyme mnlI (Thermo Fisher, USA, REF: ER1071) by incubating the samples at 37°C for 4h.  The miR-155 T/A polymorphism PCR product was incubated at 37°C overnight with the restriction enzyme TSP45I (Thermo Fisher, USA, REF: ER1511) and the digestion products detected by 3% agarose gel electrophoresis.

The differences in genotype distribution for the two analyzed SNPs between NSCLC and healthy subjects were analyzed using the Chi-square test. Deviations of the genotype frequencies in the controls from those expected under the Hardy–Weinberg equilibrium (HWE) were assessed by a goodness-of-fit χ2 test. All statistical tests were carried out using SPSS-25 software (SPSS, Inc.). P values ≤0.05 were considered statistically significant.

The study included 165 NSCLC cases and 147 healthy controls (Table 1) with a mean age of 58.5 and 52.6 years in cases and controls respectively. The age and gender distributions were similar between the two groups (P>0.05).

The distribution of rs2910164 alleles and rs767649 alleles is summarized in Table 6 no evidence of association was found.

In the current study we found that the miR-146a rs2910164 and miR-155 rs767649 variants were significantly associated with the risk of NSCLC in an Iranian population. In particular, we demonstrate a significant increased risk of NSCLC in subjects with the CC genotype of miR-146a rs2910164 compared to subjects with the GG genotype. In contrast, the AT genotype of miR-155 rs767649 is protective against NSCLC.  There was no link between miR-146a polymorphisms and smoking status although the AT genotype frequency of miR-155 was lower in smokers with NSCLC than in non-cancerous smoking controls.  No polymorphisms were associated with NSCLC stage or type.

SNPs occur approximately once every three hundred base pairs in both coding and non-coding regions of the genome [12]. Approximately 93% of functional SNPs are located within non-coding regions which are the most common sites for miRNA genes [13]. SNPs located in mature miRNA regions may directly affect binding to target miRNAs and those SNPs occur in pre-miRNA, may interfere with miRNA maturation [13]. Importantly, miRNAs generally do not act individually but as part of a network in order to regulate the expression and/or function of numerous genes whilst variations in miRNA expression induces diverse functional outcomes [6].

miR-146a is known to negatively regulate severe inflammation [14] in an NF-kB-dependent manner and can bind to sequences within the 3′-UTRs of the TNF receptor-associated factor 6 (TRAF 6) and IL-1 receptor-associated kinase 1(IRAC1) genes [14]. NSCLC has been associated with enhanced inflammation [15] and changes in miR-146a expression may enhance lung cancer risk.  In previous studies, Jia and colleagues showed that the CC genotype and C allele distribution in NSCLC patients was signiﬁcantly higher (P = 0.03 and 0.03, respectively) and concluded that the rs2910164 polymorphism of miR-146a was associated with an increased risk of NSCLC in a Chinese population [8]. A meta-analysis study has also reported that the rs2910164 polymorphism is associated with lung cancer (NSCLC and SCLC) [16].

However, there is disparate data concerning miR-146a polymorphisms and the susceptibility to other cancers. Hashemi et al. showed no statistically significant association between miR-146a rs2910164 polymorphisms and prostate cancer in an Iranian population [17] despite a meta-analysis demonstrating that the rs2910164 CC genotype was associated with decreased prostate cancer risk in an Asian population [18]. In addition, whilst the miR-146a rs2910164 GC allele was significantly associated with breast cancer in a Pakistani population [9] this was not the case in Azeri subjects from Iran [19]. Furthermore, Gao and colleagues demonstrated a significant association of the rs2910164 CC genotype or C allele with susceptibility to colorectal cancer in Chinese males [20].

A recent meta-analysis showed that the CC genotype of miR-146a rs2910164 was associated with susceptibility to NSCLC but not to hepatocellular carcinoma and gastric cancer [12]. In stratified analysis by cancer type and ethnicity, is was reported that these polymorphisms were associated with a significant risk of lung cancer, breast cancer and colorectal cancer in Asian, but not Caucasian populations [13].

miR-155 expression is significantly up-regulated in lung cancer tissues, plasma and sputum and is associated with the risk of NSCLC [7]. possibly through a modulatory effect on NF-kB activity [7, 10]. The rs767649A>T polymorphism has been associated with an increased risk and poor prognosis of NSCLC. The T allele increased the transcriptional activity of miR-155 and patients with the rs767649-TT genotype had the highest risk ratio for NSCLC and had a reduced response to radiotherapy or chemotherapy [7].

In contrast, the rs767649 TT genotype is associated with a significantly reduced risk of cervical cancer and was linked with miR-155 overexpression in cancerous tissues compared with normal tissues suggesting an oncogenic role of miR-155 in cervical cancer. However, in vitro miR-155 promoter-luciferase assays indicated that the transition from an A to T allele might lead to miR-155 downregulation at the transcriptional level. This opposing effect on miR-155 expression indicates the importance of other factors in cervical cancer pathogenesis such as the presence or absence of human papillomavirus (HPV) infection. HPV is the main risk factor for cervical cancer and may impact on the direction and magnitude of the association between miR-155 rs767649 polymorphisms and the risk of cervical cancer [10].

miR-155 is overexpressed in hepatocellular carcinoma tissues compared with adjacent healthy tissues [11] . The rs767649 T allele is associated with higher miR-155 expression suggesting that variants of miR-155 contribute to the increased risk and poor prognosis of hepatocellular carcinoma [11]. A study has reported a population-dependent difference in the impact of the rs767649 TT genotype as a risk factor for multiple sclerosis.  93% of patients and 87% of controls had the T allele and none of the patients and controls had the AA genotype in one population but this was the opposite in subjects of Chinese ethnicity [21].

In conclusion, the current study indicates that the miR-146a rs2910164 and miR-155 rs767649 polymorphisms are associated with the risk of NSCLC with the AT genotype of miR-155 rs767649 being protective against NSCLC. Larger sample sizes with diverse ethnicities are needed to extend the findings.

The study was approved by the Ethics Committee of the Dr. Masih Daneshvari Hospital, and all patients gave signed informed consent.

The authors confirm that there are no competing interests.

This study was supported by internal funding.

This article has been extracted from the thesis written by Neda KakaDezfuli in School of Medicine Shahid Beheshti University of Medical Sciences. (Registration No: 14960). Ethics committee approval ID: IR.SBMU.MSP.REC.1397.525.

Table 4: The association between SNPs and the risk of NSCLC stratified by smoking 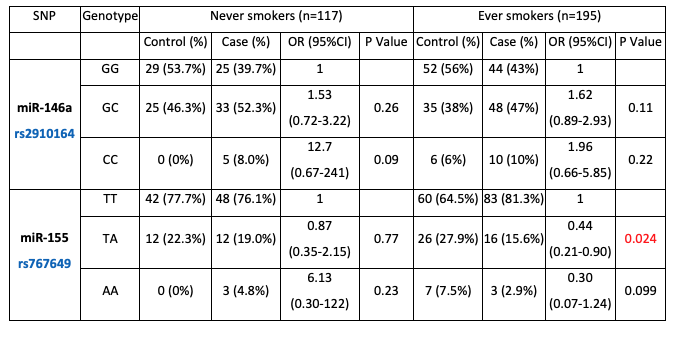 Table 5: Association of SNPs with NSCLC according to stage and subtypes 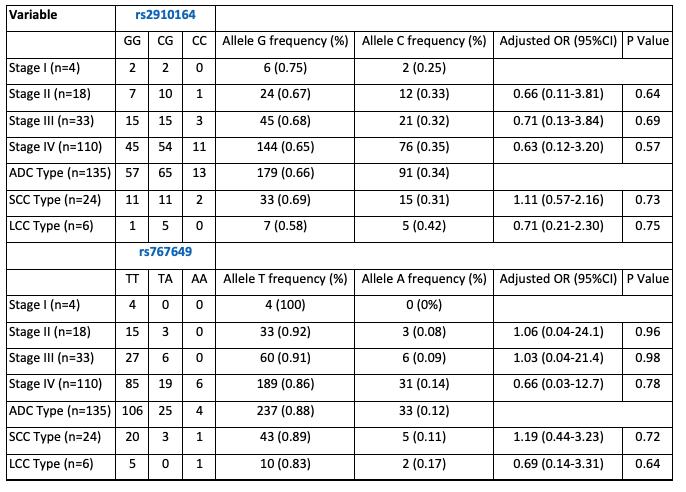