Which Incision is Better for Orthotopic Rat Liver Transplantation, Transverse or Midline?

Orthotopic rat liver transplantation (OLT) is a complex procedure extensively applicable to basic science, myriad complications can occur, incision-related self-biting has not been reported after liver transplantation. For the project of tolerance induction through stem cells, OLT was performed from inbred Sprague Dawley (SD) rat to SD (control group, n = 9), SD to Lewis (chronic rejection, n = 11), and OLT from Lewis allograft to Brown Norway (BN) rats (acute rejection, n = 63), the acute rejection group was sub-grouped into the transverse incision group(n = 26) and midline group(n = 37), Cyclosporine A was injected at 2mg/kg into the rejection groups once daily for 14 days, lidocaine cream alone or with naloxone was used for pain-relieving. The recipient survival and wound status were the primary endpoint of this study. For SD→SD, 30-day survival rate was 88.9%, no self-biting behavior occurred; for SD→Lewis, 30-day survival rate was 54.5%, the degree II of self-biting occurred in 2 cases. For Lewis→BN with transverse incision, 30-day survival rate was 51.8%, severe self-biting occurred in 16 cases in 8–27 days and 5 more cases over 30 days, which caused death or euthanasia, the degree 2 of biting occurred in 2 cases. For Lewis→BN with midline incision, 30-day survival rate was 86.0%, no severe self-biting occurred, mild self-biting in 2 cases. There was difference in the biting–related survival between two sub-groups (p = 0.003). In conclusion, incision-related self-biting behavior is species-specific for rats, the transverse incision is the pain-causing reason; the midline one is effective to avert occurrences.

Rat OLT is well accepted small animal model in studying ischemia-reperfusion injury, immunology and liver regeneration in basic science after its development by Lee and his colleagues [1–4], this procedure is still challenging and complications will occur intra- and post-operation like blood loss, thrombosis and graft dysfunction etc [5–8]. Self-biting after rat liver transplantation is not reported in the literature. Here we first reported after liver transplantation with different combinations of rat uses.

All male rats like inbred SD, Lewis and BN (weighing 180-380g) were used as donors and recipients purchased from Beijing Vital River Laboratory Animal Technology Corporation. SD→SD OLT was performed for microsurgery skills (control group, n=9); for the project of tolerance induction through stem cells, chronic rejection model with SD→Lewis (chronic rejection, n=11) and acute rejection with Lewis→ BN (acute rejection, n=63) were used, the acute rejection group was sub-grouped into the transverse incision group (n=26) and midline group (n=37). The rats were housed in a temperature and light-controlled environment, the standard food and tap water was freely accessible; they were fasted 12 hours before the operation. All experimental protocols were approved by Committee of Henan Provincial People’s Hospital and all experiments were carried out in compliance with the ARRIVE guideline and the standards for animal use and care set by the Institutional Animal Care Committee of Henan Provincial People’s Hospital.

Under inhalation anesthesia of isoflurane with a few modifications, a transverse incision was made to enter the abdominal cavity of the all donor rats. The liver was flushed first through the aorta with lactated Ringer's solution and re-flushed through the portal vein (PV). Cold storage time was less than 3 hours in all cases. In the recipient, after the abdominal cavity was opened using the transverse incision (Figure 1), the midline incision was made only for Lewis→BN subgroup(Figure 2). The native liver was removed and the graft was placed orthotopically, the suprahepatic vena cava was anastomosed with 8-0 polypropylene running suture, PV and the inferior vena cava were reconnected with the cuff, the anhepatic time was generally less than 20 minutes, and the hepatic artery was reconstructed with a stent [9], the bile duct was reconnected with a stent too. After the muscle layer was closed and coated with lidocaine cream, the skin was interruptedly sutured (Figure 3). The rat recipient was kept in a cage under an infrared light for warm. Both tap water and 10% glucose solution were supplied for first 3 days, and later regular food and tap water were available. Naloxone was additionally used to distract the recipients for the acute rejection group of the transverse incision. Antibiotic (ceftriaxone) was injected subcutaneously once a day, 3 days in total. For the rejection models, the recipient stem cells were mobilized, cyclosporine A was subcutaneously injected at 2 mg/kg once daily for 14 days and ceased afterwards. The detailed protocol of tolerance induction was out of scope here. All recipient rats were closely monitored, the severity of self-biting was rated simply on the scale adapted from the clinical setting: 0= no evidence of biting, 1=mild injury (erythema, edema), 2=moderate injury (minor tissue loss, such as single digit, fur removal, or involvement of multiple sites), 3=severe injury (amputation of several digits, significant abdominal or thoracic lesions, animal requires euthanasia due to self-biting injuries) [10]. Only the recipient rat alive for more than 3 days was included in this study.

The comparisons of incision-related self biting morbidity or mortality between groups were made with the chi-squared test or Fisher exact test; the cumulative survival rates of different groups was evaluated with the Kaplan-Meier Curve, the analysis was made with SPSS 22.0 software (IBM Corp, Armonk, NY, USA), and P<0.05 was considered significant

At present, the rat is more commonly used for liver transplant tolerance research compared to the mouse due to more available combinations of acute or chronic rejection models[10–12]. For this complex surgery, good exposure is prerequisite. Clinically, the bilateral anterior subcostal incision with a ventral midline extension is regularly made like the “Mercedes-Benz logo” which contributes to intense intraoperative and postoperative pain [13,14], the wound heals depending on good medical care, it is equivalent to the transverse incision made for the small animals[15], this incision facilitates the surgical procedure without retraction on the both side of the rib arch, especially for one surgeon. In our study group, the transverse incision was frequently made; different outcomes of OLT for 3 groups were achieved mainly due to incision selection, incision-related self injury occurs frequently, especially in BN recipient rats who can not tolerate the long pain and discomfort brought about by greater transverse incision trauma. Later incision was changed to midline one which displayed poor exposure and surgical performance due to retractors. According to duration and distress, OLT is in the list of the most extensive abdominal operation pain. Pain after operation or trauma is unavoidable and its intensity or rating varies depending on many factors including operational complexity, species, age and so on, appropriate pain control can confer on comfort, which, in turn is beneficial to agitation and anxiety reduction, decreasing oxygen consumption and better recovery [16]. For the small animals used, pain management is indispensable and should follow the animal welfare. In fact, diverse animals are susceptible to stress, pain and other discomforts [17]. BN is unresponsive to lidocaine cream and Naloxone. BN rats should be preferably addressed to pain control and less injurious incision should preemptively be selected.

Following liver transplantation,incision-related self-biting behavior is species-specific in rats due to continuous pain derived from the transverse incision selection; the midline incision is effective in reducing this self-injury and preferably selected. 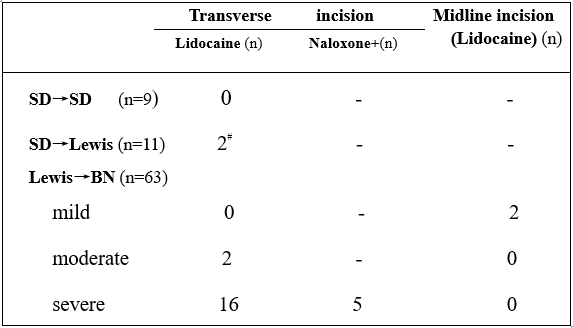