Background: In the bone marrow microenvironment, endothelial cells (ECs) are individual cells that form part of the sinusoidal blood vessels called "bone marrow endothelial niche." They account for less than two percent of the bone marrow cells. They may play critical functions in generating growth and inhibitory factors that promote the recovery of the hematopoietic stem cells.

Results: Our findings prove that the cell isolated are characteristic of bone marrow endothelial cells and response to tumor necrosis factor-alpha by an increase in proliferation and enhance the expression of adhesion molecules.

The wild type C57BL/6 mice (age 8-12weeks) obtained from the Jackson laboratory. The mice housed per the guidelines of Xuzhou Medical University, Jiangsu Province, China. The use committee approved the animal studies of Xuzhou Medical University (Xuzhou, China) and the National Institute of Health guide for the care and use of laboratory animals, Jiangsu province, China. (Acceptance number: XZMC20130226).

Matrigel was allowed to thaw on ice overnight according to the manufacture's protocols. Prechilled 24 well plates were coated on ice with 200 ul Matrigel per well. Gels were incubated for 30 minutes for solidification at 37 0 C. BMDECs 10^5 cells, resuspended in 500 ul of the pre-cold endothelial cell medium supplemented with growth factors and cell plated on the gels. The plated cells were incubated in the humidifier at 370 C for 4–7 days. The morphological changes are periodically monitored and photographed.

To verify the molecular expression of the bone marrow endothelial cells, total RNA extracted from the cells after 7 days of incubation and the negative cells immediately after isolation using Trizol reagents (TIANGEN Cat#dp424). The cDNA is synthesized by using 5X All in one RT Master mix (Cat.No.G492) and kept at -20 0C. Primers sequences and probe are shown in (Table 1). For RT-qPCR, the synthesized cDNA samples 10 ng were amplified with the SYBR green master mix in a final volume of 20 ul, as described in our previously published article(13). The mean threshold values are used to evaluate the molecular gene expression with normalization with mouse beta-actin.

To examine the molecular expression of bone marrow endothelial cells. The cells were placed in a plate pre-coated with rat tail collagen type 1 washed with cold PBS, and a herpes-chap lysis buffer containing the protease inhibitors pour into the dish, incubate for 10 minutes, and adherent cells scraped off with cell scraper. The lysed cells were centrifuged at 20,000 g for 30 minutes at 40 C. While For the non-endothelial cells (CD31 negative), the protein isolated immediately after isolation and protein stored at -200C until ready for use. The cell supernatants run on SDS-PAGE 8–12% gel (BIO-RAD; Hercules, CA). The proteins were transferred to the P 0.45 PVDF blotting membrane (Amersham™Hybond™ Germany) by the wet transfer method. Primary and secondary antibodies are shown in (Table 2).

Characterization of BMDECs by immunofluorescence staining

To certify the bone marrow endothelial cells for the expression of CD31 (PECAM-1), VE-cadherin (CD144), and ICAM-1 with passage zero determine by direct immunofluorescence staining. The CD31 positive cells were plated into pre-coated 48-well with rat tail collagen type 1 for 5–7 days, as described above. After 60–70% of the confluence, the medium removed, cells fixed with 4% paraformaldehyde (PF for 20 minutes at RT, followed by two wash 3 minutes apart with PBS. The cells were permeabilized with 100% cold methanol at room temperature for 20 minutes, rinse with PBS three times and blocked with 1% BSA/PBS for 1 hour at room temperature. Cells incubated with the recommended dilution of primary antibodies overnight at 40C. The cells were cleaned twice with PBS and counterstained with Hoechst for 5 minutes at 370C. The cells were washed with PBS and imaging acquired using inverted Nikon microscopy (Nikon Eclipse Ti microscopy, Tokyo, Japan). Primary and secondary antibodies are shown in (Table 2).

To examine the cell proliferation of primary bone marrow-derived endothelial cells, 105cells were seed in 48 well plates incubated for 7 days. After 7 days, the BMDECs was stimulating with recombinant TNF-α (10 ng/ml) and the control with 1% FBS with DPBS for 48hrs, the media containing the recombinant cytokine and FBS/DPBS were replaced with new endothelial media and incubated for another 7 days. The cells were harvest by trypsin/ETDA ( VICMED 0.25% 0.02%), centrifuge at 350 g for 5 minutes, wash 2x with PBS, and fixed with 70% cold –ethanol at -200C for 1hour. The fixed cells centrifuge as above followed by washed with FACS buffer incubated with Ki-67 (FITC, anti-mouse, Biolegend®) and F4/80 (APC, anti-mouse as isotype control Biolegend®) for 30 minutes at room temperature. The data acquired by flow cytometry. For the cell count, the cells were stain with trypan blue and live cells counted by hemocytometer.

The molecular expression of markers specific for bone marrow endothelial cells verifies by; real-time quantitative polymerase chain reaction (RT-qPCR) or immunoblotting and immunofluorescence staining. The cells were cultured for 7 days to form a confluence, then stimulated with TNF-A at (10 ng/ml) and vehicle control (2% fetal bovine serum in PBS) for 48hrs. Cells were then harvested for RT-qPCR, western blotting analysis and stained for immunofluorescence, all samples done in triplicate, and results expressed in mean with standard deviation.

Real-time quantitative PCR and immunoblotting: The fold change of the relative messenger RNA for bone marrow endothelial cells is more significant than the non-endothelial cells for ICAM-1, VCAM-1 ESAM, and VE-cadherin, respectively, as shown in figure (4A-D). Furthermore, the immunoblotting shows an increase in the expression of E-selectin, VE-cadherin, PECAM-1, ICAM-1, and VCAM-1, respectively, as shown in Fig. 4E.

Certification of primary bone marrow-derived endothelial cells by immunofluorescence staining: To certified the purity of the primary bone marrow-derived endothelial cells, the cells were cultured in a 48-well plate, after 60–70% of the confluence is achieve then tested against anti- CD31 (PECAM-1), anti-VE-cadherin (CD144) and anti-CD106 (ICAM-1) respectively. The cell shows the expression of three EC markers; PECAM-1, VE-cadherin, and ICAM-1, respectively, as shown in Fig. 5 (A-C). The mean fluorescence was quantified using Image J software on three experimental repeats, which reveals that expression of the EC-markers in order PECAM-1 > VE-cadherin > ICAM-1 as shown in Fig. 5(D).

We established a method for isolation of primary bone marrow-derived endothelial cells from mice bone marrow, which can be used to evaluate the function of endothelial cells in vitro studies. We suggest the following factors must be considered when isolating these cells.

The use committee of Xuzhou Medical University (Xuzhou, China) and the National Institute of Health guide for the care and use of laboratory animals, Jiangsu province, China approved the studies with acceptance number: XZMC20130226.

All relevant data in the study included in the article; further inquiries can be directed to the corresponding authors.

The authors would like to acknowledge the contribution, support, and expert advice of the corresponding authors. 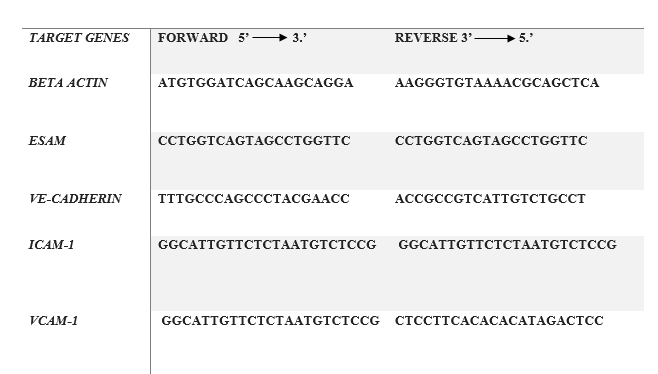