Prognostic and Clinicopathological Significance of CXCL1 Expression in Gastric Cancer: A Meta-Analysis.

Methods: Databases of EMBASE, PubMed Web of Science and the Cochrane Library were systematically searched for the eligible studies from their establishment to July 16, 2020, which reported the association between CXCL1 expression and survival in GC. The quantitative meta-analysis was carried out with Stata SE12.0 software.

Conclusions: CXCL1 may serve as a potential biomarker to predict prognosis and clinicopathological features in GC.

Despite the great improvement of diagnosis and treatment in the past decade, cancer remains a major public health problem worldwide, and is related to high morbidity and high mortality [1]. There were 17.2 million cancer cases worldwide and 8.9 million deaths in 2016[2]. Cancer cases increased by 28% between 2006 and 2016. Among cancers, gastric cancer (GC) has been a common malignant tumor in humans and has become a major health problem. GC ranks sixth for cancer incidence and third for cancer deaths with 834 000 deaths [2]. In view of this situation, numerous investigators are committed to identifying novel applicable prognostic biomarkers, which not only improve poor prognosis but also provide a novel therapeutic target in GC [3–5].

Chemokines are small chemokine proteins (8–10 kDa) with diverse bioactivities that can drive the directed migration of leukocytes to tumor microenvironments [6].There are a number of Chemokines, and researchers have identified approximately 50 chemokines to date [6]. The chemokine (C-X-C motif) ligand 1 (CXCL1), also known as the GRO-1 oncogene, is expressed in macrophages, neutrophils, and epithelial cells. It also has been overexpressed in melanoma tumors and involved in carcinogenesis of melanoma [7, 8]. CXCL1 binds specifically to the CXC chemokine receptor 2 (CXCR2), which is a member of the G protein-coupled receptor superfamily [9]. Previous investigations have demonstrated CXCL1 expression might play an essential role in the chemoresistance, tumorigenesis, metastasis and angiogenesis of cancer [10–13]. In recent years, previous studies had explored the prognostic effects of CXCL1 in cancers [14–22]. Some studies suggested that high CXCL1 expression correlates with poor survival in GC [21, 22]. However, a study by Junnila et al. reported that over-expression of CXCL1 has better survival in GC [23]. The prognostic value of CXCL1 in GC is controversial.

Therefore, we performed the current meta-analysis to explore the prognostic and clinicopathological significance of CXCL1 expression in GC patients.

We performed a systematic selection of studies published in English from PubMed, EMBASE, Web of Science and Cochrane Library. The studies were published from their establishment to July 16, 2020, which reported the association between CXCL1 and survival in GC patients. The following keywords were searched in combination: " CXCL1 Chemokine" or " Gro alpha Protein " or " MGSA-alpha Chemokine " or " Neutrophil Activating Protein 3 " or " Growth Related Oncogene alpha Protein " and " Neoplasm " or " Neoplasia " or "Tumor" or "Cancer" or “Malignancy” or "Carcinoma". The references and related systematic reviews of the included studies were tracked.

The studies were selected according to the following inclusion criteria: (1) GC patients were investigated. (2) CXCL1 expression levels were determined in human tissues or plasma samples. (3) According to the expression levels of CXCL1, patients were divided into low and high expression groups; (4) Hazard ratios (HRs) and its 95% confidence intervals (CIs) for OS time should be provided in the original paper or could be calculated through the K-M curves. Exclusion criteria were as follows: (1) studies without available data; (2) Overlapping data; (3) letters, Case reports, reviews, and conference reports; (4) studies not in the English language.

Two reviewers (Yujian Xia and Zhewei Wei) reviewed each eligible study and extracted the data independently, and any disagreements were discussed and judged by the third reviewer (Weibin Huang). The obtained data included the first author, year of publication, country, number of patients, detected method, cut-off value, follow-up time, outcome measures, analysis method, Newcastle-Ottawa Scale (NOS) criteria and clinicopathological characteristics, HRs and their 95% CIs for OS. If the results of OS were provided in the studies, multivariate analysis was considered to be prior to univariate analysis. If only the K-M curve was provided, the survival data was extracted with Engauge Digitizer version 4.1 and calculated the HRs and 95% CIs estimates based on the obtained data [24]. The quality of the studies was assessed by the NOS criteria [25].The NOS scores ranged from 0 to 9. The studies were considered of high quality when NOS scores were higher or equal to 6.

The meta-analysis was conducted with Stata statistical version 12.0 (Stata Corporation, College Station, TX, USA). The HRs for OS and odd ratios (ORs) for clinicopathological parameter were statistically analyzed. Chi-square-based Q and I2 tests were used to determine the heterogeneity among the included studies. Ph value < 0.1 indicated significant heterogeneity. The I2 value ≥ 50% was considered as severe heterogeneity, and then the random-effect model was applied. Otherwise, the Fixed-effect model was applied. Subgroup analysis and sensitivity analysis were used to analyze the sources of heterogeneity. P-value < 0.05 was considered statistically significant.

According to our search strategy, a total of 927 original articles were initially identified. With 224 duplicated studies removed, 703 articles were left. Then, 623 studies were excluded owing to reviewing titles and abstracts. As a result, 23 studies remained for full-text screening, 14 studies were excluded under the following exclusion criteria: 5 studies for reviews and 9 studies for insufficient data. Finally, 9 studies involving a total of 1474 patients were included [18, 19, 21–23, 26–29]. The flow diagram of literature retrieval was shown in Fig. 1. The main characteristics of the enrolled studies were shown in Table 1. Among these studies, a total of 1474 GC patients were included. The mean sample size of patients was 163 ranged from 34 to 558. The regions represented in the study included Finland (n = 1), Japan (n = 2) and China (n = 6). Moreover, 7 studies used immunohistochemistry (IHC) technique for the detection of CXCL1 expression, while 2 studies chose Real-time polymerase chain reaction (RT-PCR). NOS scores were higher or equal to 6 in all the included studies, indicating that all studies had high quality.

Correlation between CXCL1 expression and prognosis.

A comprehensive analysis of the molecular mechanism of GC is of considerable significance to improve the early diagnosis rate and individualized treatment. Molecular mechanisms of CXCL1’s underlying the regulatory role in tumorigenesis and tumor progression have been widely researched. Numerous studies have shown that CXCL1 could promote the progression of cancer by activating multiple signaling pathways. Yang et al. revealed that high expression of CXCL1 stimulated breast cancer cell metastasis via the ERK/MMP2/9 pathway[12]. Wang et al. discovered CXCL1 promoted breast cancer metastasis via NF-kB/SOX4 activation [18]. Kuo et al. demonstrated CXCL1 increased cancer cell metastasis by decreasing the level of fibulin-1 expression through NF-kB/HDAC1 epigenetic regulation in prostate cancer [14]. Wei et al. focused on the prognostic effects of CXCL1 expression in GC, and they discovered CXCL1 promoted tumor growth through VEGF pathway activation [22]. In addition, it had been reported that lymphatic endothelial cells could produce CXCL1 and Wang et al. showed CXCL1 secreted by tumor-associated lymphatic endothelial cells could promote the lymph node metastasis of GC via activation integrin β1/FAK/AKT signaling [21]. Determining the underlying mechanism is a prerequisite for determining the prognostic significance of CXCL1 expression. Therefore, more basic researches should be conducted to explore the potential mechanism of CXCL1 in cancer prognosis.

In our study, there were some limitations which should be further discussed in the present study. First, there was no consistent the cutoff value for defining high and low CXCL1 expression, which might lead to the bias of the results. Second, we could not obtain partial HR directly from the original papers. Thus, we had to calculate the HRs from the survival curves, which might not be precise enough. Third, All eligible articles were retrospective research in the meta-analysis, which might lead to a degree of bias.

This study was supported by National Natural Science Foundation of China (Grant NO. 81782579).

The datasets during the current study are available from the corresponding author on reasonable request.

Table 1: The main information of included studies in the meta-analysis 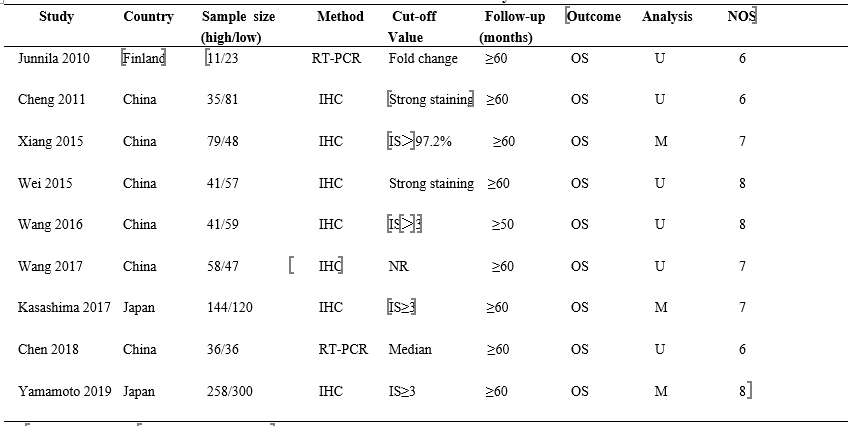 NR, not reported; IS, immunoreactivity score; U univariate; M multivariate

Table 2: Subgroup analysis of association between CXCL1 and OS for gastric cancer patients

Table 3: Meta-analysis results for the associations of high expression level of CXCL1 with clinicopathological parameters