With the rapid development of industrial economy, heavy metals such as copper and chromium contained in industrial wastewater will cause serious environmental pollution[1-5]. Heavy metals can cause serious harm to the human body, such as chromium: it can cause numbness of the limbs and mental disorders, and copper can cause arthritis and accelerate human aging[6-10]. The concept of "cleaner production" was put forward in the 1950s and 1960s. The concept was to quickly realize the impact of industrial development on the environment, thereby establishing a safe and friendly environmental concept. Now that the concept of environmental protection has been deeply rooted in the hearts of the people, economic development is gradually pursuing green[11-17].

Chitosan is widely used in the fields of food, medicine and wastewater due to its excellent biocompatibility, biodegradability, non-toxicity, adsorption and antibacterial properties. Nowadays, In the study of the adsorption of heavy metal ions, chitosan derivatives have excellent performance except relatively expensive price. Chitosan fiber(CS) is dissolved in acid solution, the used CS can be re-dissolved and produced to achieve recycling, meeting the requirements of sustainable development and saving resources. At present,there are few studies on the use of CS for heavy metal adsorption.

In the previous research on the removal of heavy metal ions in wastewater, chitosan and modified substances were mostly used as adsorbents, and the research and application of chitosan fibers were very few. In this paper, chitosan fiber is used as the experimental material to discuss the influence of chitosan fiber, metal chromium ion and copper ion on reaction time, copper ion concentration, temperature and pH value. The kinetic and thermodynamic analysis of the adsorption process were carried out, and the adsorption mechanism was characterized by SEM, FTIR and XRD. It is expected to provide a basis for the application and expansion of chitosan fiber in water treatment fields such as water purification or sewage treatment.

Materials:The CS was purchased from Tianjin Zhongsheng Co.,LTD.(china). The average length of CS is 40mm, and the linear density is 1.3D.

Performance test of the CS to remove Cr (VI) and Cu(II) was conducted within a flask with 250 mL capacity. The employed Cr (VI) and Cu(II) solution quantity was 100 mL in each experiment. The 0.1 mol/L HCL and NaOH were utilized for adjusting solution pH value. The speed and temperature of shaker kept at 90 rpm and 288 K, respectively. After reaction, the filtrate is collected for analyzing Cr (VI) and Cu(II) concentration. The experimental methods of Cr(VI） are presented in Table 1.

Experimental methods in this study.

The adsorption capacity and adsorption efficiency of the fiber to Cr(VI) and Cu(II) are calculated by formulas (1), (2) and (3) respectively. 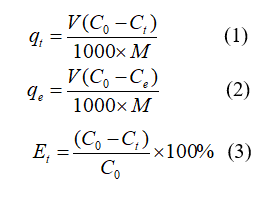 4.1 Effect of single factor on Cr (VI) and Cu(II) removal

It can see from Fig.4 and Tab.3, the kinetic equation of the CS fiber for the adsorption of Cu(II) has the same properties as that of Cr(VI). the kinetic simulation using pseudo-first-order is not good and the actual data deviates seriously from the fitted curve. At the same time, the correlation coefficient of kinetic parameters is low. While the pseudo-second-order kinetic plot, with high correlation coefficient of kinetic parameters.

In addition, based on the analysis of Cr(VI), we can get Freundlich model was used to illustrate non-ideal adsorption for the non-uniform surfaces and multilayer adsorption. We can see from Fig.6 and table5. A high kf value indicates the high affinity of CS fiber for Cu (II) ions.

AS show in Fig.8. CS fiber has two different crystal forms, both of which belong to the monoclinic crystal system, namely Form I (2θ in10˚) and Form Ⅱ (2θ is about 20˚). As can be seen from Figure 5, CS fiber has a broad crystallization peak at 2θ=10.9˚, which represents the hydrated crystals of chitosan. It is due to the fact that water molecules enter the chitosan. After reacting with chromium, the peak at about 10˚ disappears, It shows that after the adsorption of CS molecules with chromium, the separation is weakened.The regularity of the three-dimensional structure of the sub-chain reduces the intramolecular crystalline area.

In addition, After contact with copper ions, the peak at about 20˚ disappears.This also indicates that the functional groups of chitosan fibers have chelated and cross-linked with copper ions.

Fig.9 shows that the infrared spectra of chitosan fiber before and after the absorption of copper ions are roughly similar, and the position of the characteristic absorption peak is based on the original value remains unchanged, the chitosan fiber is more polar than the copper ion after adsorption. This is because after the -OH in the chitosan fiber forms a coordination bond with Cu(II), it breaks the hydrogen bond between -OH, and then The added Cu(II). steric hindrance effect indicates that Cu(II) has been complexed with chitosan fiber. Chromium ions show the same trend.

Chitosan fiber can be dissolved in acetic acid, and the spinning solution of chitosan fiber is under acidic conditions, which is beneficial to recovery. Spinning into chitosan yarn or other textiles, used in water purification and other water treatment fields, can remove harmful metal ions. It is an environmentally friendly material that can be recycled continuously and has broad application and development prospects.

This research was financially supported by the National Youth Foundation of China (51303128) and the Natural Science Foundation of Tianjin (15JCZDJC38400).