Methods: A total of 120 patients who underwent arthroscopic ACL reconstruction were included in this prospective and randomized study. All patients were randomized into three groups: IV group, IA group and placebo group. Patients in the IV group received intravenously administered TXA (15 mg/kg in 100 mL of saline solution) 10 minutes before tourniquet release; patients in the IA group received intra-articular TXA (15 mg/kg in 100 mL of saline solution) injected via the drainage tube; and patients in the placebo group received an equivalent volume of normal saline administered into the knee joint cavity and intravenously. Drainage tubes were removed 24 hours after surgery, and all enrolled patients experienced a 4-week follow-up period. The drain output volume, visual analogue scale (VAS) score, patellar circumference, hemarthrosis grade and Lysholm score of all patients were recorded.

Results: Both the IV group and the IA group had significantly lower drain output volumes at day 1, lower VAS scores at weeks 1 and 2, smaller patellar circumferences at weeks 1 and 2, and lower hemarthrosis grades at weeks 1 and 2 than the placebo group (p < 0.05). There were no significant differences in drain output volume, VAS score, patellar circumference or hemarthrosis grade between the IV group and the IA group at any time point (p > 0.05). No obvious differences in Lysholm score were observed between any pair of groups at week 4 (p > 0.05)). Neither infection nor deep vein thrombosis occurred in any group.

With the popularization of sports and the frequent occurrence of accidents, the incidence of anterior cruciate ligament (ACL) injury increases year by year [1]. Arthroscopically assisted ACL reconstruction (ACLR) is a common, reproducible and minimally invasive procedure. However, after ACLR, hemarthrosis and its associated pain afflict patients and can disrupt rehabilitation programs [2]. Postoperative hemarthrosis has a 3% to 10% incidence after ACLR [2]. Hemarthrosis creates many adverse effects, including increased susceptibility to infection, potential toxic effects to the cartilage, possible subsequent synovitis and arthrofibrosis, the onset of fever episodes, delayed rehabilitation, and prolonged hospital stay [2]. These aspects negatively affect the outcomes of patients and result in increased costs [3]. Minimizing postoperative intra-articular hemarthrosis may be potentially advantageous for recovery in ACLR patients.

Tranexamic acid (TXA), as an antifibrinolytic agent derived from lysine, binds to lysine receptor sites on plasminogen and prevents the formation of plasmin, thus inhibiting the breakdown of fibrin clots and reducing active bleeding [4]. TXA has a great role in reducing postoperative blood loss, the need for transfusion and hospital-related costs after knee surgery without increasing the surgical risks [5-8]. There are two major administration routes in the use of TXA: intravenous (IV) administration and intra-articular (IA) injection. Both IV administration and IA injection of TXA have been previously reported to effectively reduce hemarthrosis during ACLR. Some studies reported that IV administration of TXA could reduce the amount of drainage blood and postoperative hemarthrosis, reduce fever episodes and the need for aspiration of the knee, and improve knee range of motion (ROM) and early-phase outcomes without side effects after ACL reconstruction [9, 10]. Research on intra-articular injection of TXA during ACLR reported that it could significantly reduce postoperative intra-articular bleeding, pain and the grade of hemarthrosis, and no systemic side effects or need for aspiration was noted during the follow-up period [11]. However, the comparative efficacies of IV and IA TXA for reducing postoperative hemarthrosis during ACLR remain elusive.

This was a single-center, prospective and randomized controlled study. Patients who underwent arthroscopic ACL reconstruction due to ACL rupture from December 2016 to December 2019 at our study location were enrolled consecutively. The exclusion criteria were as follows: previous knee procedures on the same side, renal disorder or insufficiency, abnormal coagulation profile, treatment with drugs interfering with coagulation or TXA clearance, multiple ligament injury, patients affected by blood, hemorrhagic or liver disease, and patients with nonsteroidal anti-inflammatory or antiplatelet therapy. This study was approved by the medical ethics committee of the Second Affiliated Hospital of Xi’an Jiaotong University. All participants gave written informed consent. Finally, 120 patients (74 males and 46 females) were included, with an average age of 31.0 ± 8.1 years (Fig. 1). The age, sex, body mass index (BMI) and time from injury to surgery of all patients were recorded.

Transtibial single-bundle reconstructions using autologous hamstring tendon grafts were performed in all patients; the graft was fixed using the RIGIDLOOP Adjustable Cortical System (DePuy Mitek, USA) for femoral fixation and MILAGRO Advance Interference Screws (DePuy Mitek) for tibial fixation. The intraoperative data registered were operative time, partial meniscectomy, meniscus repair, and tunnel diameter. General anesthesia or spinal/epidural block was selected according to the individual condition of each patient. The drainage tubes were clamped for 2 hours before release. A pneumatic tourniquet was used in all patients and was released after skin closure. All operations were performed by the same team of surgeons. Cefazolin was administered 30 minutes before surgery for short-term prophylaxis. The analgesia regimen was intravenous administration of ketorolac (30 mg every 8 hours) for the first day and oral administration of celecoxib (200 mg twice daily) for the next 5 days.

A standard protocol was used for the rehabilitation program. Muscular training included exercises for the quadriceps, hamstrings and core stability at each stage. Patients were discharged with a long brace that was locked in the fully extended position at rest for 6 weeks postoperatively, and they were instructed to partially to fully bear weight with crutches under the protection of the fully extended brace according to their tolerance. After 4 weeks postoperatively, a full range of passive activity was allowed, with an increase in the flexion ROM of 15° per day up to ≥ 120°.

The drainage tubes were routinely removed, and the volume of drainage was recorded 24 hours after surgery. All enrolled patients experienced a 4-week follow-up period. After 1, 2 and 4 weeks postoperatively, the visual analogue scale (VAS) score [12], patellar circumference, hemarthrosis grade [13] and Lysholm score [14] were recorded. The patellar circumference was measured 1 cm proximally to the superior border of the patella of both knees to evaluate joint swelling. To minimize interindividual variability in the patellar circumference, we considered the difference between the affected side and the contralateral side [9]. The clinical grading of hemarthrosis was scored according to Coupens and Yates [13]. Patients were accurately examined for the presence of leg swelling or calf pain, and those with suspected deep venous thrombosis (DVT) were recommended to undergo Doppler sonography. The postoperative evaluation was performed by a trained orthopaedic surgeon (R.M.) who was blinded to the treatment groups. 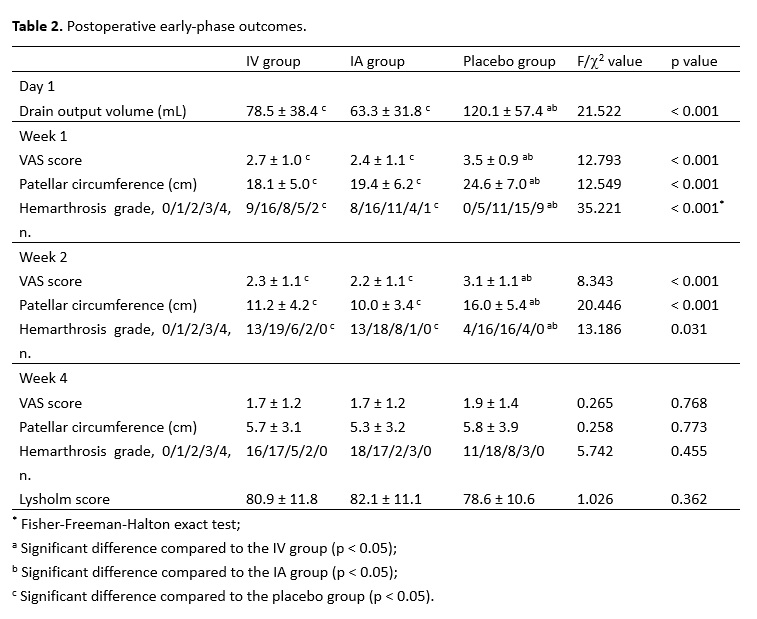 Four weeks postoperatively, the VAS scores, patellar circumferences and hemarthrosis grades of the IV group, IA group and placebo group exhibited no significant differences (p = 0.768 for VAS scores; p = 0.660 for patellar circumferences; p= 0.455 for hemarthrosis grades; Table 2). There were no infections in either group, and no patient developed DVT by postoperative week 4. 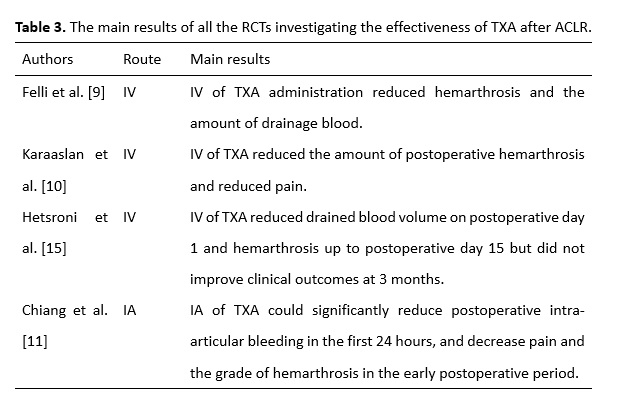 There were several limitations in this study. First, the follow-up period (4 weeks) was not long enough and there were not enough observation times points for the Lysholm scores. The first 3 months postoperatively is a significant period for preventing a delay in the rehabilitation program, so the exact long-term effect of TXA application on outcomes after ACLR could not be effectively analyzed in this study. Second, we only administered TXA intravenously 10 minutes before tourniquet release, which might not be sufficient to maximize the positive physiological effects of TXA. The regimen of intravenous administration of TXA requires further investigation.

This study was approved by the medical ethics committee of the Second Affiliated Hospital of Xi’an Jiaotong University. All participants gave written informed consent and agreed for this study.

The datasets during and/or analyzed during the current study are available from the corresponding author on reasonable request.

The authors would like to thank American Journal Expert (AJE) for language polishing.