Background: Spirulina platensis water extract (SP) could decrease hearing degeneration via reducing oxidative stress damages in the auditory system of senescence-accelerated prone-8 (SAMP8) mice. This study aimed to investigate the effects of SP on the caspase-independent apoptosis in the cochlea and brainstem of SAMP8 mice.

Age-related hearing impairment (ARHI) was common in older subjects. Both of peripheral and central auditory pathways degenerated during aging [1]. ARHI was a complex disease and many factors would contribute to its severity. For example, genetic background, noise exposure, obstructive sleep apnea, metabolic syndrome, ototoxic agents, etc. [2–14]. Hypoxia, neural inflammation, oxidative stress damages, and caspase-dependent cell apoptosis in the auditory system were the most known mechanisms for ARHI [8, 15–18]. However, caspase-independent cell apoptosis in ARHI was rarely reported till now.

Spirulina platensis, one type of blue-green algae, had anti-inflammatory and antioxidative effects via inhibiting cyclooxygenase-2 and nicotinamide adenine dinucleotide phosphate (NADPH) oxidase enzymes [24, 25]. Our previous study had showed that spirulina platensis water extract (SP) could decrease hearing degeneration via modulating expressions of endogenous antioxidant genes and reducing oxidative stress damages in the cochlea and brainstem of senescence-accelerated prone-8 (SAMP8) mice [26]. However, the effects of SP on the caspase-independent apoptosis in the auditory system was still unknown. Therefore, we aimed to investigate this issue in this study in SAMP8 mice.

Twelve 11-month-old male SAMP8 mice were randomly divided into two groups: the control group was fed a normal diet (Fwusow Industry Co, Ltd, Taiwan), and the spirulina group was fed a normal diet with oral supplementation SP (400 mg/kg body weight) for 6 weeks. The animals were housed (in groups of four mice per cage) in a temperature-controlled room with a constant 12-hr light–dark cycle. Food and tap water were freely available throughout the experiments. The Institutional Animal Care and Use Committee of Dalin Tzu Chi Hospital approved the protocol used in this study.

ABRs (Intelligent Hearing Systems, Miami, FL) were measured at the start (11 months of age) and at the end of the study under general anesthesia with an intraperitoneal injection of sodium pentobarbital (65 mg/kg). Click sounds, 8- and 16-kHz tone bursts were delivered sequentially to the left ear through earphones (Telephonics Corp, Farmingdale, NY). Subdermal needles were used for recording. The active electrode was inserted at the vertex; the reference electrode was ventrolateral to the left ear; and the ground electrode to the low back above the tail. The amplified responses were then averaged by a computer and displayed on a computer screen.

Histology and immunochemistry of the cochlea

At the end of the study, the mice were sacrificed by decapitation under general anesthesia with an intraperitoneal injection of pentobarbital (65 mg/kg). Before being euthanized, animals were perfused of 2.5% glutaraldehyde and 4% paraformaldehyde in phosphate buffered saline (PBS: NaCl, 150 mM; KH2PO4, 2 mM; Na2HPO4 2H2O, 8 mM, pH 7.4) via an intracardiac injection. For each mouse, the temporal bones were removed, and the cochlea was perfused with the above fixative through the oval and round windows to an outlet within the apex. After 24-hr post-fixation in the same fixative at 4 °C, the temporal bones were decalcified in 10% EDTA solution, 4% paraformaldehyde, and 2.5% glutaraldehyde in PBS (pH 7.4) for 1 week at room temperature. The temporal bones were then rinsed in PBS, dehydrated through a graded series of alcohol and xylene, and embedded in paraffin.

Embedded cochleae were sectioned at 5-µm thickness at the mid-modiolar level. The cochlear structures were observed with hematoxylin and eosin (H & E) staining using a light microscope. The cell density of neurons in SG, within a central region of 50 × 50 µm2 at the middle turn of cochlea, were measured under × 400 magnification. The numbers of SGN were counted by the presence of stained nucleus. The morphology and numbers of OHCs and inner hair cells (IHCs) in the Organ of Corti of cochlea were observed under × 400 magnification.

The sections were heat-treated at 95 °C in 10 mM sodium citrate buffer for 20 min, incubated in 3% H2O2 for 10 min at room temperature, and blocked in 5% skim milk to prevent non-specific labeling. The specimens were then incubated overnight at 4 °C with one of the following primary antibodies: rabbit monoclonal anti-PARP-1 (1:500 dilution) (Abcam plc, Cambridge, U.K.), and rabbit anti- AIF (1:1000 dilution) (R&D systems, Inc., U.S.A.), were obtained from Cell Signaling Technology (TAIGEN, TPE, R.O.C.).

The above features were observed blindly in two adjacent cochlear sections at 10-slides apart (equals to 50 µm apart) at the same mid-modiolar level. All data were acquired from two cochleae and averaged for each mouse by one well-trained researcher. Stained regions were quantified as the percentage of the entire target area.

The brainstem tissue of SAMP8 mice were dissected cut into small pieces (50–60 mg), homogenized with an appropriated volume of ice-cold lysis buffer with protease/phosphatase inhibitor cocktail, and incubated in the ice for 10 min. Cytoplasmic extraction reagent was added to the tube and centrifuged for 5 min (~ 16,000 xg). The supernatant was immediately transferred to a clean tube (cytoplasmic extract), and added the nuclear extraction reagent to the insoluble fraction. The tube was placed on ice and continued vortexing for 15 seconds every 10 minutes, for a total of 40 minutes, and centrifuged for 10 minutes (~ 16,000 xg). The supernatant was immediately transferred to another clean tube (nuclear extract). Total protein in the supernatant was measured by the BCA method (Bio-Rad, Hercules, CA). Equal amount of protein (20–50 µg) were separated through sodium dodecyl sulfate-polyacrylamide gel electrophoresis and transferred onto nitrocellulose membranes. The membranes were washed with TBST buffer (10 mM Tris-HCl, 150 mM NaCl; pH 7.5) supplemented with 0.1% Tween 20 and then blocked with TBST containing 5% nonfat dried milk. The membranes were incubated overnight with primary antibodies. After being washed three times with TBST, the membranes were exposed to secondary antibodies coupled to horseradish peroxidase for 2 h at room temperature. The membranes were washed three times with TBST at room temperature. Immunoreactivity was detected using ECL reagents. Anti-cleavaged PARP1 and anti-PARP1 (1:500, Boster, CA), anti-AIF (1:10000, Boster, CA), and anti-GADPH (1:50000, Boster, CA) antibodies, were obtained from Cell Signaling Technology (TAIGEN, TPE, ROC). Densitometric analysis of the data was performed using FusionCapt Advance Camera and FusionCapt Advance analyzer ver. 16.07 software.

Since oxidative stress damage was the important mechanism for ARHI, many exogenous antioxidants were used to prevent ARHI in animals and humans. For example, vitamins C and E, and caffeine might prevent hearing degeneration and/or auditory neuropathy in animals [16, 27, 28]. Folic acid could reduce hearing degeneration in subjects with lower folic acid intake [25]. Tea drinking was also associated with better hearing sensitivity in aged subjects [29]. In this study, we had chosen SAMP8 mice as an animal model for ARHI. Increased oxidative stress damages, decreased endogenous antioxidative capabilities, increased inflammation and apoptotic and/or autophagic cell death might account for premature hearing loss in SAMP8 mice [29]. On the contrary, SP could slow down the hearing degeneration in SAMP8 mice as shown in this study.

Previous studies determined that activation of the redox system occurred initially at the plasma membrane, in which NADPH oxidase could reduce oxygen to superoxide anion radicals. Thereafter, excess free radicals and/or reduced protection from antioxidants might be destructive to molecules in the subcellular and cellular levels, and subsequent resulted in cell death. So, it was very reasonable to see that SP, as an inhibitor for NADPH oxidase enzymes, could reduce oxidative stress damages and prevent diseases [24]. For example, SP could reduce oxidative damages in the brain and prevent memory loss in SAMP8 mice [31]. SP could decrease salicylate-induced tinnitus by reducing oxidative stress damages and neuroinflammation in many brain regions of mice [32, 33]. Our previous study also demonstrated that SP could prevent ARHI by increasing expressions of antioxidant genes and decreasing malondialdehyde levels in the cochlea and brainstem of SAMP8 mice [26].

The beneficial effects of SP on auditory functions might be associated with preventing OHC and SGN cell losses and possibly via decreasing caspase-independent apoptosis signal pathway in the cochlea and brainstem.

The Institutional Animal Care and Use Committee of Dalin Tzu Chi Hospital approved the protocol used in this study.

The work described in this manuscript was supported by a grant (DTCRD-102) from the Dalin Tzu Chi Hospital, Buddhist Tzu Chi Medical Foundation, Chiayi, Taiwan. 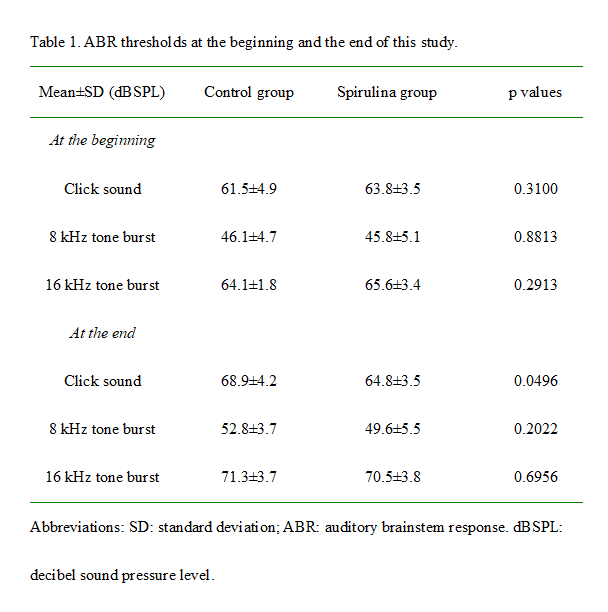