Investigation of in Vitro Culturing Method for Ascaris lumbricoides Eggs in Laboratory: From Soil to Bench

Background: Ascaris lumbricoides is one of the four most common soil transmitted helminths (STHs), they are transmitted by direct contact with infective eggs present in the contaminated soil. Ascariasis infection causes bowel obstruction, nausea, and vomiting. Investigation of in vitro culturing of Ascaris eggs in laboratory in not routinely reported in the literature, if a simple method could be developed, it can help in testing novel drug discovery for STHs. Hence, this study was carried out to investigate on the in vitro culturing method for Ascaris lumbricoides eggs isolated from soil samples. The eggs of Ascaris lumbricoides were isolated from soil samples in Kampung Orang Asli Sungai Lalang Baru, an indigenous village in Malaysia.

Methods:The eggs were primarily isolated from soil using floatation technique. Next, the Ascaris lumbricoides eggs were cultivated using 0.1% of sulphuric acid in a glass petri dish. Then, the petri dish was incubated at 37°C in the incubator. The embryonation of the parasite was observed daily by screening samples under a light microscope. Embryonation of Ascaris eggs was detected in loamy soil within 2-5 days and continued to observe up to 28 days.

Conclusion: It was found that 0.1% sulphuric acid was ideal for the development of Ascaris lumbricoides eggs for cultivating in vitro condition. In future, this method could be used to propagate the eggs for testing anthelminthic drug inhibiting the developmental stages.

More than a quarter of the world’s population have higher chances of getting infection with the soil-transmitted helminths (STHs) like roundworm (Ascaris lumbricoides), hookworm for example Ancylostoma duodenale, other parasites like Trichuris trichiura (whipworm), Strongyloides stercoralis and other parasites due to the contaminated soil and it can cause several diseases [8]. Hookworm infection is spread via larval transmission, where else Trichuris and ascariasis are via egg ingestion [11].

Ascaris lumbricoides is a nematode (roundworm) and it is also referred as the large intestinal parasitic roundworm which multiplies inside the gastrointestinal tract (GI tract) of human. Ascaris lumbricoides is a soil transmitted helminth (STH), they are transmitted through direct contact with the eggs present in the contaminated soil [12]. Ascariasis is widespread and often reported from warm tropical and sub-tropical regions. The most prevalence of Ascaris infection are reported from the countries in tropical area because of warm and humid environment that could favour the transmission of the Ascaris infection [5].

The Ascaris infection are found in endemic areas in developing countries from Asia and Latin America [10]. Usually, it affects children via contaminated food, water, or soil [6). It is mostly reported from developing countries with poor hygiene and sanitary practices [2]. The infection can result in stunted growth as well as intellectual and cognitive loss, causes extended damage to the selected target organs like brain, liver, and urinary tract. Ascaris lumbricoides can also lead to bowel obstruction and volvulus in children, appendicitis, pancreatitis, anaemia due to mucosal bleeding in the upper gastrointestinal tract, asthma and also atopy [7, 13].

Besides, the eggs are surrounded by two layers, thicker outer shell and thinner inside the shell. The viable eggs have spaces between the inner cells of the eggs and the outer shell of the Ascaris eggs. The eggs are smooth, have decorticated shell and also bumpy, mamillated shell [11]. Next, fertilized eggs can float in the saturated solution of common salt. Published literature reveal that high density sugar or salt solution can be used to float up the eggs/ova of helminths [3]. This study was carried out to investigate on the in vitro culturing method for Ascaris lumbricoides eggs isolated from soil samples, at in vitro condition.

The village is located alongside of a river and some villagers are still using the untreated river water for their household requirements; however, majority of the villagers use clean water provided by the government. The soil sample at the riverside, near the toilet area and at the pond area were collected for the purpose of this study. The samples were collected by using a shovel to transfer the soil into a plastic bag, approximately 200–300 gram of soil were collected with a depth of 4–6 inch (optimized). Next, they were transported to the laboratory and stored and stored in a refrigerator until further studies.

Firstly, around 3 grams of the collected soil was mixed with distilled water (15 ml) in a centrifuge tube and centrifuged for 2500 rpm and for 5 minutes. The supernatant was discarded into the sink and filled up with 15 ml of the floatation fluid which was high density salt and/or sugar solution (specific gravity; 1.28).

Isolation of STHs from soil

Three different samples were collected from riverside, toilet area and near the pond area in Kampung Orang Asli Sungai Lalang Baru. The soils were sandy and loamy soil type soil. The sandy soil near the pond area and riverside showed negative result for the presence of Ascaris eggs. Meanwhile, the loamy soil from all regions showed positive result and contain a few of Ascaris eggs. The results were shown in Table 1 below.

Table 1 The result of the soil samples 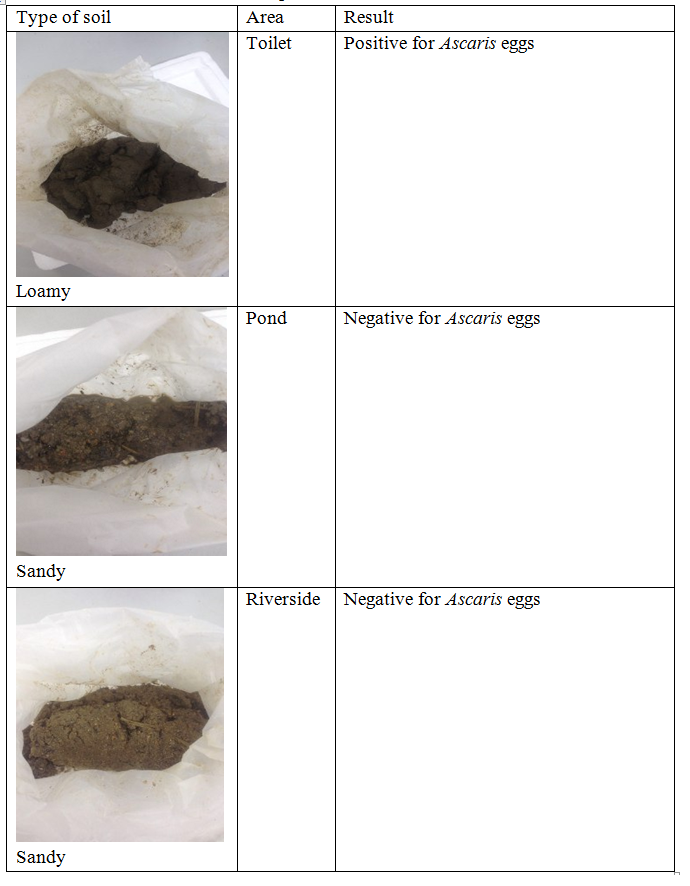 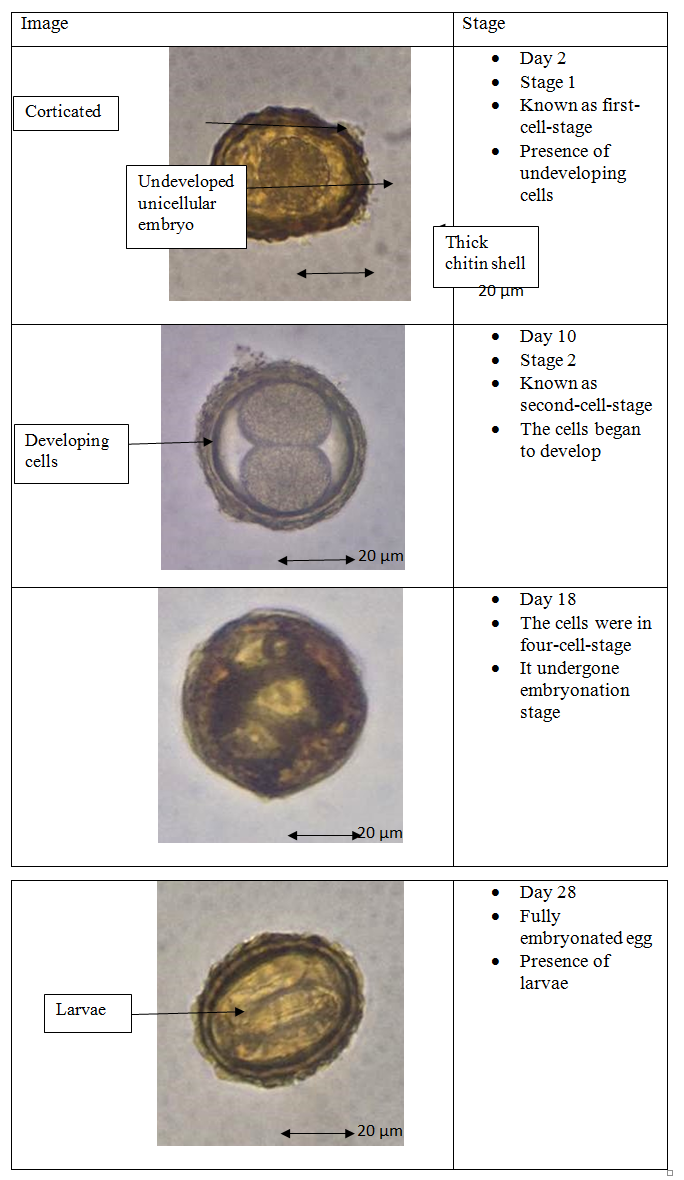 Total three soil samples that were collected from Kampung Orang Asli Sungai Lalang: loamy and sandy soil. The soil samples collected from different locations were between 200–300 grams. The loamy soil consists of the combination of sandy particles, silt, and clay soil. Loamy soil conditions revealed high STHs egg density as previous reported by Nisha et al. [9] and it provided favourable conditions for the STHs growth. This is because the STHs eggs need warm and moist soil and the temperature should be over 18 °C to inhabit.

On the other hand, sandy soil type showed the absence of Ascaris eggs. This can be due to the sandy soil lack of characteristics features needed for the Ascaris eggs to fertilize. The sandy soil composed of high proportion of sand and a little clay inside. These elements did not support embryonation of Ascaris eggs, hence Ascaris eggs were not be seen in a sandy type soil. The soil samples were kept inside the refrigerator for a few days before it was being used for the isolation technique. The soil samples can tend to become dried after if it is kept for too long, the samples need to fresh for better yield. For the optimization technique, about 5 to 10 grams were kept in the incubator and incubated for 37 °C. The soil sample with viable eggs lasted up to one month in the incubator in moist conditions (distilled water was added at regular intervals to avoid dryness).

For the isolation of egg, floatation technique was used using high density floatation fluid in combination of salt/sugar solution. However, it was very difficult to get a very clear viewed of Ascaris eggs when observed under microscope as the soil samples contained a lot of debris and some small particles, despite sieving the soil samples few times prior to experiment.

The glass petri dishes were incubated for 37 °C and the embryonation stage were observed daily starting with the next day of the incubation. Subsequently, to avoid the dryness effect such as the solutions in the petri dishes was dried, also to maintain the humid environment for the eggs to develop, 2 to 3 ml of distilled water was added into the glass petri dishes. This technique was supported by the previous research by Bessat and Dewair in 2019[1]. Only distilled water was added to maintain moisture in the petri dishes containing the Ascaris eggs and the addition of sulphuric acid should be avoided since it can lead to hyper acidity affecting the developmental process.

All the stages for developmental process of Ascaris eggs can managed to be discovered completely on the 28th day. Each stage was observed for at least 2 days before the cells began to develop into more specialized form which at the end, the cell turned into larvae. From the previous research by Cruz et al. [4], each of the cell stage took at least 3 days to be observed except for the 3-cell stage. Temperature could be one of the factors of the viability of the eggs, from the previous study had mentioned that it could speed up the development of embryo if the temperature was higher compare to low temperature [4]. The first cell-stage of the eggs was observed between day two and day five. The morphology of the eggs observed was corticated layer, the thick chitin shell and undeveloped embryo of the eggs. The corticated layer was a layer that surrounded the eggs. Next, for the second cell stage, the cells began to develop, and the cleavage could be seen in this stage. The second cell stage was observed between day ten and fifteen and the eggs could be possibly turned into cleavage as early as day eight but this could be overlooked because the eggs were observed at the same time under microscope. Subsequently, the decorticated eggs that undergo the embryonation could be seen at day eighteen and finally the eggs had completed the embryonation period. The larvae development was seen in the last stage on day twenty-eight. The larvae was nicely captured and observed under microscope.

The loamy soil sample from Kampung Orang Asli in Sungai Lalang Baru showed positive results of Ascaris eggs. The floatation technique was a good method to isolate the eggs from the soil sample without disturbing the fertility of the eggs. The technique was handy and simple. Besides, it was found that 0.1% sulphuric acid can be used as potential acidic environment for the development of Ascaris lumbricoides eggs aiding in the cultivating of eggs in vitro condition. The finding from this study can be used to propagate more eggs in laboratory for in vitro larvicide assessment, as the infective eggs are available naturally in environment condition.

No funding was involved in this project.

Written informed consent was obtained from all participants.